Letters to the Editor – October 1 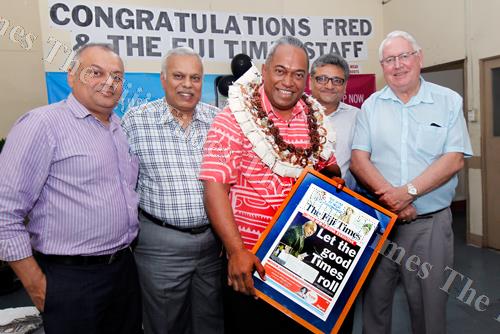 Editor’s achievement
CONGRATULATIONS Fred Wesley on receiving the Media Executive of the Year award at the recent PANPA industry awards in Sydney, Australia. Silent were some moments with sleepless night. Battle was tough but your prayers were bright. Righteous you were and you proved the same. Justice was delayed but never denied. Dark days are over. The Fiji Times has once again rolled over. GULSHER ALI, Lautoka

Walking the walk
I fail to comprehend how it’s possible for politicians or political candidates not to divide opinion. That’s their job, although they can do it in a way that encourages discussion, and whether common ground does exist. Unless they identify how their opinions and platforms differ from that of other candidates, how on Earth are voters to know who to vote for? The issue we truly do need to elicit from our candidates is not what they are promising — appealing as those promises may be — but how they intend to achieve those promises. Anyone can make promises, but without substantial and credible strategies, it’s simply talking the talk. I want to see the steps for walking the walk. Vivien Counsell Mitchell Serua

Major maintenance
I BELIEVE neither Water Authority of Fiji nor Energy Fiji Ltd seem to consult each other when doing major maintenance (My letter of 27/9 refers). Saturday’s paper advised that there will be power cuts on Sunday in Votualevu in Nadi on the same weekend as WAF cuts water to replace valves in Nadi. This meant those with water pumps and tanks would not be able to use them at all. Maybe they did talk but neither wants to budge. This is becoming increasingly apparent with our government agencies as they make decisions negatively impacting our citizens. A worrying trend indeed. Norman Yee Martintar, Nadi

Planned shutdown
I am thankful to the Water Authority of Fiji for repairing our aging water infrastructure. Now may I ask, are there any more to be repaired? Can you repair them all at once, or do you really have to do them one by one over a period of time? Anyway, ever since the many “four-day” water cuts, I have honed the skill to bathe in two litres of water. Now, if you do intend to have another planned water shutdown, instead of saying to have less baths, you can say, “Be like Allen, learn to bathe in two litres of water”. Allen Lockington Kava Place, Waiyavi, Lautoka

Water disruptions
For the benefit of all the citizens and businesses, hotels, resorts etc, of greater Nadi and parts of Lautoka, will the Water Authority of Fiji kindly state how many more 72-96-hour water disruptions we will be subjected to before all major forced outages become a thing of the past. It is so very annoying and grossly inconvenient especially to the poorer sections of the rural community. Ronnie Chang Nadi

School trips
Students are given the privilege of free bus fares to and from school. I just wanted to know whether they also have to pay for special school trips such as visiting expos and field trips? This is in regards to students being asked to pay their own fares on special school trips therefore causing a stir of questions. Raynav Chand Nakasi

Caretaker governance
We are now in the interim period between a dissolved Parliament and a newly-elected one. I believe an elected government only exists when its parent body — Parliament — exists. However, to avoid the disruption of government services in the absence of an elected government during this interim period, a “caretaker” government is appointed to administer normal government operations. I believe the caretaker convention dictates that such governments do not however, initiate any totally new policy or initiatives that may unduly compromise and burden the incoming government. Since our Constitution stipulates that the PM and his Cabinet ministers assume the “caretaker” government role by remaining in their posts until a new PM is appointed, I believe there is no specific provisions or guidelines in place to provide formal “caretaker” guidance. Especially, when the normal oversight body — Parliament — is absent. I agree with the view that we should by now at least establish formal “caretaker” guidelines for this constitutional provision, as a check and balance measure in parliament’s absence. EDWARD BLAKELOCK, Pacific Harbour, Deuba

State of our roads
This problem of poor roads is widespread and evident now especially during and after the rain as the roads are badly damaged. In the cities, the drains get damaged and the coverings of manholes are dislodged. We have been promised that with the adoption of a single dedicated authority, there would be quality roads and timely repair of broken roads, poor drainage system and insanitary conditions of roads. I believe for far too long our road levy and tax monies have been wasted on poor quality and workmanship of our road and those responsible for the maintenance of roads should act proactively and ensure road safety. A shake-up is overdue as we cannot be wasting good money on recurring bad roads. Param Singh Navua

Drua punish
Eagles While I congratulate the Drua team for maintaining its unbeaten run at home and punishing the NSW Country Eagles with a bonus point win, I believe that there is room for improvement especially our set pieces, scrums and ball handling. On the other hand, I was pleased that our boys worked hard to maintain their position on the points table as they prepare to face Canberra Vikings, against whom our boys faltered last year in the Canberra cold 66-5. In addition, the Drua’s style of playing open rugby was tough for the opposition to handle as our boys showed deft off-loading skills and ruthless flair. The Eagles unfortunately lacked the skills to match our flair as they failed to stick to the basics and found it hard to nullify our off-loading game. The visitors were under immense pressure and struggled when under the pump. This allowed our boys to gain confidence and the upper hand. The Drua made those pop-up passes resulting in seven beautiful tries and in an absolutely poetic style dictated phases quite well. Furthermore, I compliment the Drua for playing dazzling footie in wet conditions. It was a joy to see the boys racing out of the line and pressurising and frustrating the opposition. The Seruvakula coached Drua side played as a unit and impressed many. For me, stallion Aporosa Tabulawaki had to be the man of the match as he was quick as a flash and rattled the opposition with some hard hits. The likes of Kurumudu, Naqali, Voka, Navori, Radrodro, Daveta and Waqatabu also played their hearts out. As our boys prepare to play against Canberra Vikings and an away match against Force, I thank the team and officials for doing well. I also urge the players to play to the plan and not to be carried away by the crowd. Vinaka vakalevu and wananavu team Drua! Rajnesh Ishwar Lingam Nadawa, Nasinu

Honourable Hilton
Honourable is a descriptor fittingly applied to Frank Hilton. He dedicated an entire lifetime to lifting the quality of life of the disabled in Fiji without any pomp and parade and that kind of paraphernalia. In his quiet and humble way he transformed a whole country’s thinking and attitude towards the disabled. We as a nation owe Frank Hilton an immense debt of gratitude for what he has done for the disabled people in Fiji. I wish him good health in his twilight years. Rajend Naidu Sydney, Australia

Year 8 exams
As our Year 8 students sit for their external exams, I would like to wish every child all the best and I pray that your pen finds success and you come out with flying colours. I must thank the diligent teachers for preparing their children as they took afternoon and Saturday classes in a bid to prepare their children well. Dear parents, please support your child as he sits for this important exam. Cheers! Rajnesh Ishwar Lingam Nadawa, Nasinu

Police presence
We hear every day of robberies taking place at the Suva Bus Stand. Jewellery snatching, purse snatching, computer snatching, bag snatching etc, happening every day but none of the culprits are caught. I wonder why the police presence here is not increasing. It is my humble request to the Police Commissioner to increase the number of police personnel here. Believe me, people are suffering. I believe action is needed now. Para Naidu Lautoka

Security’s attitude
Everything was wananavu except the part where the security gatekeeper with an inflated sense of self-importance tried to stop us from having lunch at a resort in Rakiraki saying the place was fully booked. At the reception we were welcomed to have lunch which we enjoyed. Wonder what the security’s attitude was about? Rajend Naidu Sydney, Australia