Letters to the Editor – November 8 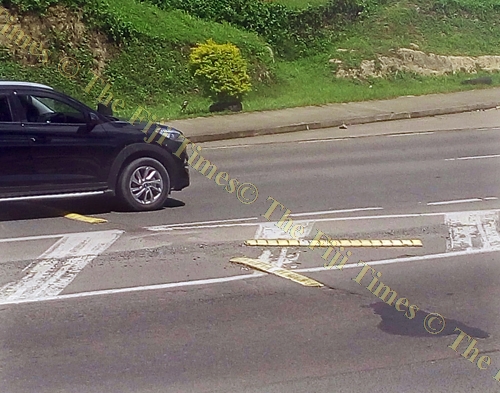 Last year in September, motorists were taken by surprise when two sets of road humps were installed along Ratu Dovi Rd near the Coke factory. Later on, the Fiji Roads Authority claimed that it was a hazardous spot where a lot of accidents took place and the speed was reduced to 30kmph. The FRA stated that it was only a temporary arrangement and the directive would be reviewed. It is more than a year now and because of heavy vehicle movements, the rubber humps have come off their fixtures and scattered on the road. The loose rubber is very dangerous that it can be caught under the wheels of a vehicle and could contribute to accidents or can cause damage to the body of smaller vehicles. There are also exposed bolt nuts used to hold the rubber road humps to the road and this can easily cause a tyre puncture. If there is no need for the road humps, can this debris be removed for the safety of all the road users? SATISH NAKCHED, Suva

With the implementation of the new road layout in Nadi Town, I don’t see traffic easing but the situation becoming more tense and unbearable. The congestion doesn’t seem to be easing as several intersections are jam-packed because there are no traffic lights and roundabout or traffic controllers to guide and move the traffic accordingly. As a result, motorists and passengers are stranded not knowing when they can get out of the situation on a daily basis. For a change, please install traffic lights and introduce the needed roundabouts which gives everyone a fair chance to move on. Without additional roads and bridges, the town’s traffic woes will remain a nightmare. Please don’t upset your travellers by implementing something which is counterproductive. We don’t want to see travellers disadvantaged and losing out because of your poor planning. The traffic lights and roundabouts are working wonders everywhere so why can’t our town have them? At least motorists will move with certainty through lights and right-hand rule signal. It is my sincere request to the authorities concerned to leave the town as it was before rather than complicating and making the situation even worse. Our local town council should be more concerned about this matter than the FRA because I think if people don’t come, the town is nothing. Don’t rely on third party to fix your problem, please. Suresh Chand Nadi

While death is inevitable, an ironic reality that adults would rather not talk about their wishes for funeral arrangements. Sadly, funerals represent a clash in views, values and opinions among relatives resulting in arguments as well as conflicts. Sometimes the immediate family of deceased individual’s (husband, wife, children) appear to have different views about funerals arrangements in comparison to parents, brother and sister of the deceased. It can become worse when there is intermarriage between individual of different cultures, nationalities, social status and faiths. The list goes on but the reality is making one’s wishes about funeral arrangements while one is alive can lead to much convenience and unity. This will reduce chances of conflicts among family members, let alone the grieving. It sounds funny, but this is a reality that we Pacific Islanders may need to wake up to. Floyd Robinson Toorak, Suva

There is a story about a king who was invited to peace talks so that part of the world could find peace. He didn’t like the idea of attending it with the very kings who he was warring with. But the people desired peace because they were tired of living in fear of attacks. The entourage of high ranking officials that came to invite him bowed very low and said: “Your highness, the kings of faraway lands desire your presence to attend the peace talks.” He stood a while and thought and said: “What if I refuse?” The reply was: “Then all of them will wage war on you.” Sometimes this is how I feel about the politics that is going on in Fiji. Allen Lockington Kava Place, Waiyavi, Lautoka

The Supervisor of Elections mentioned (FT 06/11) that the issues being faced with pre-polling would be addressed. Does that mean that those people that couldn’t vote because of various reasons will then get the chance to? Nigel Fiu Owls Perch, Lautoka

Do all concerned government ministries have proper documentary records of grants given to date? More importantly, has there been any follow-up on how these grants have been utilised by respective recipients? Any possibility that everyone get access to this information through some sort of credible publication? After all, it was taxpayers funds. Just for the sake of transparency and accountability. MOHAMMAD IMRAZ JANIF, Natabua, Lautoka

IT is important to understand that the role of government is twofold. It dishes out handouts as exemplified by the various financial packages etc being
given out by the government of the day. The less known but very important role that we forget is that the same government which is giving out
the handouts is also the government that makes the laws. It is much more important to think about the laws and decrees now in force and how these have impacted your society and your life rather than the handouts. If you know that these laws and decrees have brought hardships and restrictions,
then the sensible thing to do is not to vote for those who made these laws. Anyway, you are not obliged to thank the government for the handouts
by your vote. Remember the handouts are used up by now, but the effects of the laws linger on and on. WILLIAM ROSA, Tavua

I JUST said, “Well duh, how could the other political parties do what the FijiFirst party has been doing for people in the past so many years.” Excuse me, they didn’t have access to public funds to be able to do that. And why should they do so when it’s the government’s job to do it. Karike! ALLEN LOCKINGTON, Kava Place, Waiyavi, Lautoka

I think traffic congestion has a number of negative effects: the ones I can think of are as follows: Wastage of time of motorists and passengers Delays, which may result in late arrival for employment, meetings, and education, resulting in lost business, disciplinary action or other personal losses. Wastage of fuel because of increased idling, acceleration and braking. Wear and tear on vehicles as a result of idling in traffic and frequent acceleration and braking, leading to more frequent repairs and replacements. Blocked traffic may also interfere with the passage of emergency vehicles travelling to their destinations where they are urgently needed. One would hope bad drivers are not met when you came across any traffic congestion because they would give you high blood pressure. Suresh Chand Nadi

Is it ethical and legal for politicians to blatantly ask voters not to vote for particular candidates or political parties? This is going to be some election in Fiji’s political history. Too many low blows. Mohammed Imraz Janif Natabua, Lautoka

I find it disturbing that the general secretary of the FijiFirst party, Aiyaz Sayed-Khaiyum attacking the NFP manifestos in their rally in Savusavu on 03/11/18. He said that the NFP $5 plan was “stupid”, it would cost Fiji $700 million and will incur more debt in future. He further said that there are many lies contained in the NFP manifesto. The NFP has put out their manifesto and whether what they stated will be fulfilled or not, it will be us the people who will hold them accountable if they come to power, but to attack them in the way Mr Sayed-Khaiyum did is really uncalled-for. I would request the general secretary of the FijiFirst party to work on their manifesto and make it available for the public to scrutinise, rather than attacking parties who have already announced theirs. Kositatino Tikomaibolatagane Vuninokonoko Rd, Navua

You know that Fiji is indeed a good place to live in when you receive a Happy Diwali greeting from non Hindus. Allen Lockington Kava Place, Waiyavi, Lautoka

I have no respect for Melbourne Cup, whatsoever. It’s just a cringefest manifestation of human egos to show how less empathetic they are towards animals. Another horse died (again) this year — I simply don’t understand how and why this event is still being organised. I’m disgusted. Ashneel J Prasad Auckland, New Zealand

Mr Hazelman’s recent letters to the editor concerning a National Federation Party candidate’s indiscretion and applying the same brush to the party itself is uncalled-for. We all have, at times been in the same boat too and so it is wise to remember that we live in glass houses and should not throw stones. William Rosa Tavua Deceiving name In the so called Pacific Cup soccer tournament, players of Fiji origin participate. There are not any teams from other Pacific Island nations. The name of this tournament is deceiving. Fiji FA, how does this benefit Fiji soccer? Let the national team play international matches instead. Mohammed Imraz Janif Natabua, Lautoka

What is the difference between pre-poll and the national poll day? And what is the logic behind the blackout period when in fact the election has already started? I believe our national election is probably the one with the most legality and technicality in a democratic world today. Pita Soroaqali Nadarivatu

I don’t see any party talking on the subject, things like taxation on retirement packages, review of the taxation scheme, taxes are currently calculated from annual salaries plus allowances and reimbursements, but not refunded if the individual retires, dies or resigns from that employment before the year ends. Nigel Fiu Owls Perch, Lautoka

I heralded DST but my body clock remained a step back. Wow! I need to readjust quickly to keep up with time. Duh! What a world! Joji O. Toronibau Navetau, Tunuloa, Cakaudrove