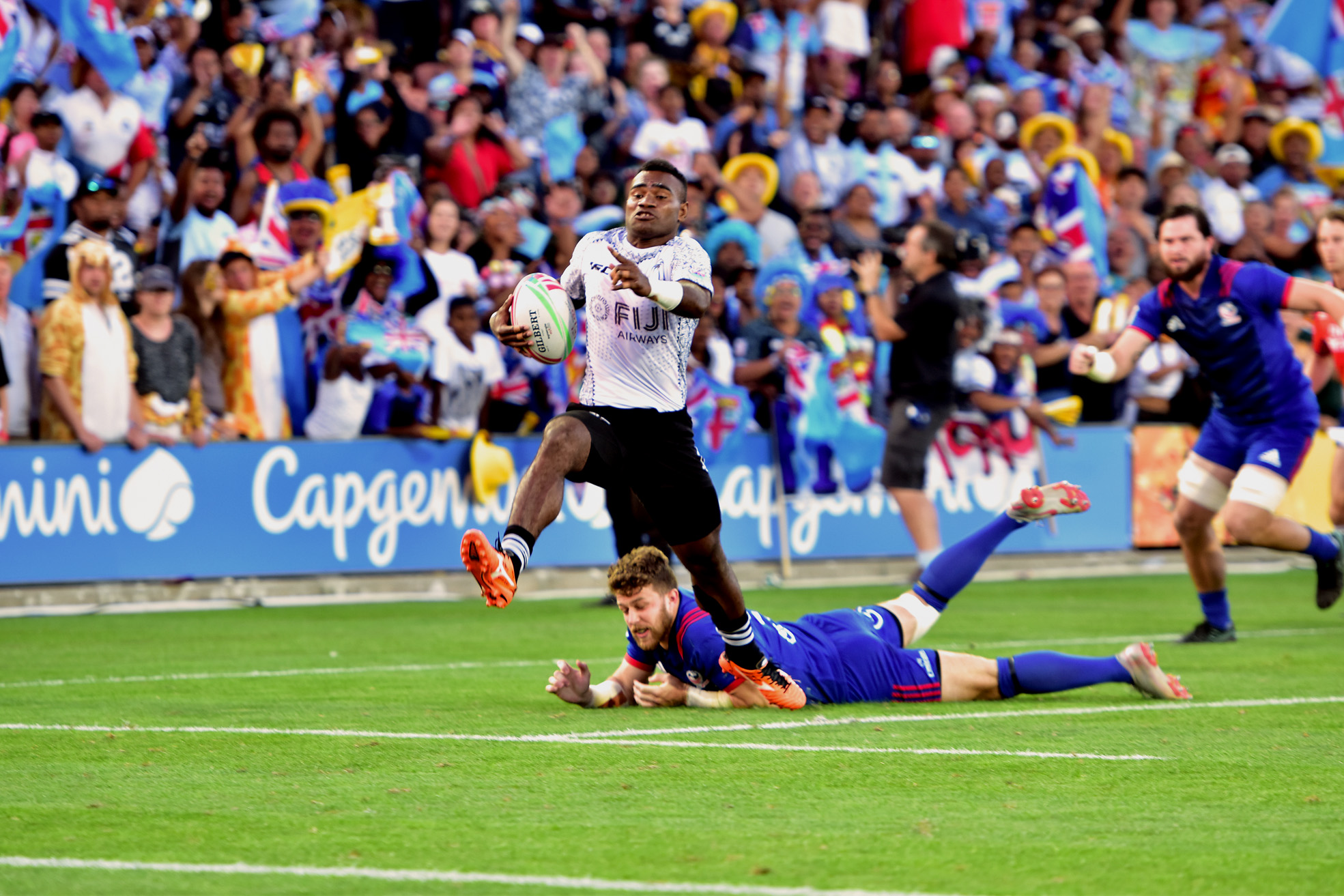 Jerry Tuwai of Fiji Airways Fiji 7's team runs for a try against USA in the final during the Hamilton 7's in New Zealand. Fiji won 38-0. Picture: RAMA/FILE

From experience I have learnt that there is no single greatest 7s player but they have all been great and wonderful 7s players. I commend Jerry for being a loyal servant of Fiji rugby but to call him the greatest Fiji sevens player is paying disrespect to the contributions made by the 7s master Waisale Serevi who played rugby for Fiji at a time when conditions were tough and the WRSS was not even introduced and the major 7s tournament that Fiji took part in was the Hong Kong 7s tournament. When David Campese made his debut commentators dubbed him the greatest 7s player. Then came Serevi and he was tagged the greatest 7s player. After Serevi, his protégé William Ryder was nicknamed the greatest 7s player. Then we had Osea Kolinisau — another true son of Fiji. Jerry of course has emulated the success of the past 7s players and is a great athlete. After Jerry I’m sure we will have another Fijian player who will make headlines and capture more fame. So will he become the greatest 7s player? Therefore, I salute all our wonderful 7s players for it is their unity and team bonding that has produced great players such as Serevi, Ryder and Jerry Tuwai. I just wish the WRSS was introduced when Serevi was in his prime days! But I’m sure the debate on who Fiji’s greatest 7s player will continue to sparkle and attract interest! Rajnesh Ishwar Lingam Nadawa, Nasinu

Congratulations are in order for Jerry Tuwai. You got what you deserved. You played your heart out and made our country proud. It must be a good feeling being rewarded for your hard work and dedication. A good mentoring leadership watch was on you with God’s blessing as well. Believe me there are people who work hard daily yet their superiors challenge their performance for their own reasons. Well as they say, keep doing what you have to do and one day you will reap your fruit. Kirti Patel Lautoka

Recently, there was a total power blackout in Viti Levu. At least I got a telephone notification which is something. A few hours later, power was restored. Now at least 24 hours after the event, I believe EFL were unable to locate the cause (according to media outlets). So what did EFL do, go and press a reset button somewhere? Sounds strange to me, especially for a reputable supplier. Allan Loosley Tavua

It comes as no surprise that another person has been assaulted and robbed in Suva. Such mindless, unlawful and shameful acts have become a norm for survival in our urban centres for years and particularly in Suva. I believe the fact that the matter has come to light is because the victim happens to be amember of the European Union (EU) Suva office. I believe those in authority and by that I mean parliamentarians and senior police officers are blind to such activity as they travel around the cities from the comfort of their vehicles oblivious to the assaults and robberies. One does not need to be a law enforcement officer to notice the youngsters and adult males roaming our urban centres scanning for their next targets. The reality, I believe, is that the situation has got out of hand as there has been little to no action to curb once and for all this breakdown in social order. The buck rests with our Prime Minister, Voreqe Bainimarama, Minister for National Security and Defence, Inia Seruiratu, and Police Commissioner, Sitiveni Qiliho. They need to answer to the nation why it is becoming dangerous for us to walk our urban streets and they need to clarify exactly how they are intending to fix the problem? I’m no parliamentarian nor do I have the authority, but given the opportunity, I sure have a few ideas on how to stem this issue. What’s concerning most of all is why those in authority are failing at it? They need to get their act together, and take control! Simon Hazelman Rava Estate, Savusavu

I read The Fiji Times every day, it keeps me informed. I am in my 70s now and the Fiji I knew when I was growing up is no more. Our streets are no longer safe. The roads are congested. NCDs are on the rise. People are dying younger. Our waterways are filthy. Even Nubukalou Creek that runs through the heart of Suva is full of rubbish. Rubbish is tossed everywhere. Yesterday as I read The Fiji Times 7/11 I was not shocked that a member of the European Union was attacked and robbed and had to be airlifted overseas for treatment. We have taken away the disciple that used to be meted out when I was still in the teaching profession. Children respected teachers. They respected their parents, they respected the neighbours. A saying from the past was — “children should be seen, not heard” took on a different meaning to the modern man. Sure, children’s voices should be heard. Not the tantrums they are showing nowadays. I remember the days when I walked past a group of students, they would fall silent and show respect for me and other teachers. Robberies are reported every day in The Fiji Times, on TV and on the radio. Social issues have risen. Drugs can be found on the streets, children are being used to carry drugs. People blame the internet, please don’t do that. Because if the very core of our existence is intact, that is the family unit and the values that I was brought up with, nothing can move us. Government, the teachers, social organisations, even the church can’t do it on their own. Parents are the first point of contact for our children. That is where the grooming should start. If the foundation is weak, a building will not last. The family is the foundation, how can we get back what we may have lost? Let rebuild, lets repair the family, the foundation and we will get back on the right track. We can do it. Isa, my Fiji! ILIESA BARAVILALA, Natabua Housing, Lautoka

Mother of all Festivals

When the first Fiji Jaycees chapter was formed in 1956 and in Suva, thousands of people witnessed the festivities of the first Hibiscus Festival. Though it was only a one-day affair. The first Hibiscus queen was 18-year-old Miss Liebling Hoeflich. Two years later (1958) it became a week-long event still organised by the Fiji Jaycees that brought our multiracial and multireligious people together in the spirit of festivity. In 1959, a Hibiscus Festival Association (HFA) was set up to manage the affairs of festival. As the festival’s strength, growth and popularity increased a Hibiscus organising committee (HOC) was established. Since then the HOC has been planning, organising and overseeing the success of the festival famously known as the “Mother of all Festivals”. Each year the week-long festival during second term school holidays has been full of cultural events, bula wear, hibiscus flower, colourful lights, varieties of eatables, Ferris wheels, children’s playing facilities, introduction of vying hibiscus queens, public judging, float processions, announcement of charity/Hibiscus queens/ runner-ups and merrymaking until midnight of Saturday. People from the Central Division including many parts of the country waited eagerly every year to be part of this colourful festival that brought hundreds of people together in one location for eight days. During the Hibiscus Festival, one could notice children, youths and adults with smiling faces, colourful costumes, excitement, spending mood, overcoming heat/cold/rain, travelling long distances by private/public transport, walking from bus stations and other locations to the festival ground and never willing to abandon the good feeling of this event even in difficult situations or any unforeseen circumstances. With me, many people must have been eagerly waiting to hear the announcement date for 2019 Hibiscus Festival. A new HOC had been formed to carry forward the evergreen Hibiscus Festival. Through social media, I have learnt that this year the Mother of all Festivals that started 63 years ago and brought happiness, meeting/greeting, lifelong connections, rejoicing and sweet memories will not take place. I am sure many citizens will feel sad and hurt that they will miss out a grand festival that created so much enthusiasm among all races in the country. A suggestion, how about organise the Hibiscus Festival either before first school term or second term begins next year, remove sadness from everyone’s face, make it a really happy new year for all and especially when the country celebrates our 50th year of independence. Chandra Prakash Singh Caubati Housing,

It’s difficult to accurately predict where, when and at what strength a tropical cyclone will strike. As they often veer off course, change their tracking speed and intensify or weaken suddenly. You can’t stop a tropical cyclone but you can take steps now to protect yourself and your family. Assess your risks and know your home’s vulnerability to storm surge, flooding and wind. Everyone needs to be prepared for the unexpected. Wise Muavono Balawa, Lautoka

The 150-year-old The Fiji Times has provided so much historical information about incidents that happened in Levuka, Suva and parts of Fiji. I’m glad that I have been kept abreast with what transpired in the days when Fiji was a British colony to the days when we gained independence and then to the ugly days of our political history. Reading the article titled Early Suva days gave me an insight into the early days of Suva as I look forward to the history publication of our oldest newspaper. Thank you The Fiji Times for taking us back to the good old days! I’m sure our senior citizens must be proud of the enormous contributions they made towards building a better Fiji. Let’s learn to appreciate their efforts! Rajnesh Ishwar Lingam Nadawa, Nasinu

The Fiji Bati squad looks confident after their stunning victory over Samoa last week. Despite looking the stronger of the two sides, the Bati should be wary of the PNG Kumuls who have shown great form against our team in recent Test matches, especially the last one. Mohammed Imraz Janif Natabua, Lautoka

I believe democracy works when those in power are held accountable. Dan Urai Lautoka