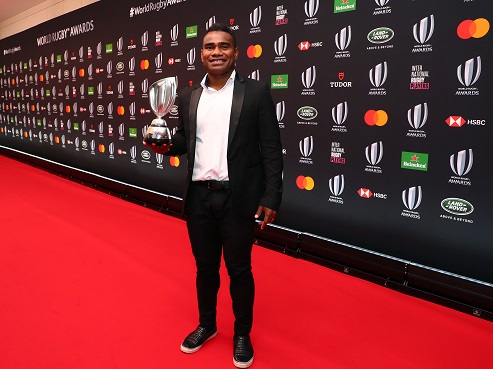 One of the greatest debates right now is who is the greatest sevens player in history. Among the leading players in the history of rugby sevens are: Waisale Serevi, Eric Rush, Jonah lomu, Christian Cullen, Amasio Raoma and Jerry Tuwai. In my opinion the greatest player is Jerry Tuwai, with 18 world series tournament titles, five-in-a-row Hong Kong sevens titles, three-in-a row Oceania Sevens titles, one prestigious Olympic gold medal, one time player of world club sevens award, three dream teams in a row, three time nominee of world sevens player and one time sevens player of the year. I am pretty sure many will disagree with me and might have someone else in mind but Jerry’s record speaks for itself. In addition he has a few more years left in him to add to his achievements DHARMENDRA KUMAR Rewa St, Suva

Most homo sapiens know that Fiji are the kings when it comes to sevens rugby but it is very rare for an individual Fijian sevens king to get crowned. As the accolades continue to pour in for being named World Rugby men’s sevens player of the year, Jerry Tuwai remains as humble as ever. We are aware of his capabilities. A master attacker, committed defender and strategic decision-maker. Despite giving away the captaincy to focus on his contributions, he retains leadership. In a historic land of champion sevens players who have attained royal status in the eyes of fans, Jerry Tuwai is a Fijian sevens jewel in the crown. Mohammed Imraz Janif Natabua, Lautoka

For the violated, that would be very little compared with the scars they will carry throughout their lives. The mental ones. But what of the violators? Name and shame. Walk ’em through the street, butt naked I might add with stitches of castration (maybe not) for all to see. A whole lot might argue that. Then again, I will add some more; punishment should be so severe that relapses to their actions will never be thought of let alone carried out again. MANOJ LAL PATEL Drasa Ave, Lautoka

The security guard at LTA Laucala Bay, who worked on Tuesday (5/11) at about 10am, must be commended for a job well done. He did more than just his role and he made every customer feel welcome. He ensured their ease throughout the process: from entering, picking a number, filling out forms, being served and exiting. The pleasant demeanour of the security guard and his friendly attitude quickly dissolved the frustration of customers about the new notice: which had something to the effect of LTA needing the owners’ consent for transactions on their behalf, including receiving payments. It is quite sad that, today, such a service is rare in society. Thank you, sir, for the hope and the reminder of what the “bula spirit” is. Samuela Savu Farm Rd, Nakasi

According to a report submitted to the United Nations Human Rights Council under the Universal Periodic Review, the Government says that it has a proven record of working in good faith with employers, employees and worker representatives. Despite this assurance, why is there any need for the UK and Northern Ireland to question the Government of Fiji what action is being taken to review laws that unduly restrict fundamental freedoms for workers and their unions, including rights of freedom of expression, peaceful assembly and association? Mohammed Imraz Janif Natabua, Lautoka

Defending the attempt by Nancy Pelosi and the Democrats to impeach the US President (POTUS) by Rajend Naidu of Sydney, Australia (Defending democracy, FT2/11) is an exercise in defending the indefensible. Can Mr Naidu indicate via these columns as to what is the high crime that POTUS has committed that warrants impeaching? Name just one. With the stock market frequently breaking records, unemployment at record lows for blacks and hispanics, the flow across the southern border down 60 per cent from the highs of May and the introduction of a new Migration Protection Protocol (MPP) that weeds out economic migrants, confronting China like no other president which will soon be contributing $100B to the American treasury, foreign policy seeing the rout of ISIS and the killing of their leader Abu Bakr al-Baghdadi, domestic policy where amongst other initiatives is the establishment of Opportunity Zones where investors in economically distressed zones can access attractive capital gains tax incentives. To date I believe there are about 8700 such zones across 50 states. On top of all these achievements he is fighting off a ceaseless impeach attack by Nancy Pelosi, the doyen of “straight thinking” that I believe Mr Naidu worships. The impeach attack started even before he was duly elected almost three years ago, and I am not lying. Please check it for yourselves. Now who is really defending democracy? Seems Mr Naidu gets distracted by all the chaff and noise Nancy Pelosi uses to conflate, convolute and confuse. I believe there is no high crime Mr Naidu, and that is why Republicans voted as they did. It is all about the politics of 2020 and revenge for 2016 and the Democrats know their only chance of unseating him is via impeachment, now. They got no chance via the ballot box of November 2020 with the economic miracle he is unleashing and
showing no sign of slowing down. The Democrats have got all their eggs in the impeach basket. Egg on ones face is an idiom that comes to mind, a massive egg splash at that. MAREKO VULI, Wainibuku Rd, Nakasi

After municipal councils came under fire most recently, I read in The Fiji Times (04/11) that a municipal council picked up an award at the prestigious 2019 Fiji Business Excellence Awards. The Sigatoka Town Council received the Commitment in Business Excellence prize for the third time. For them, this is not the end as they plan to go a step further. Can it be revealed what data was relied on for the municipal council to reach the podium for a third occasion? It surely can’t be achieved through languishing in barren intellectual spaces. Mohammed Imraz Janif Natabua, Lautoka

Just imagine if The Fiji Times were tasked to do clean up around the country. They would do a better job than the councils and the contractors. Well, they seem to find and publish pictures of piles of rubbish all over the country. Just imagine eh! Allen Lockington Kava Place, Lautoka

Can the Minister for Education enlighten the public on the logic of standard exams for Year 9 and Year 11 well after their final internal exams? I believe it’s more like a waste of resources, finances and time as students don’t take it seriously at all. Ask any teacher or student and they will tell you the same. I believe the ministry should seriously review some of its reforms and policies which are more logical in every sense. Otherwise standard exams is just one of the wasted reforms to be undertaken ever. Pita Soroaqali Nadarivatu

Fijian brothers Sevu Mocenacagi, Isoa Tabu and Kavekini Tabu will go down into history books as they’ll play together for the 7s team. The trio follow the footsteps of the Barrett brothers- Beauden, Scott and Jordie, who wore the famous All Blacks jersey. In the ’90s the Rauluni brothers (Vesi and Vili) donned the national jumper. Then came the days of Tomasi Mawi and Peni Rokodiva Junior as the duo donned the 7s jumper. Furthermore, thanks to Uprising Resort and Rene Munch we were entertained by brothers Wise Nayacalevu and Avenisi Vasuinibu who won the 2012 HK 7s title defeating NZ (35-28). In addition, brothers Sevu and Isoa played in the 2018-19 WRSS. Today the Oceania 7s kicks off in Suva and I’m sure that competition will be tough. While NZ has big names in Baker, Collier, Curry, Joass, Mikkelson, Nicole, and Rokolisoa, Australia has been boosted with names in Malouf, Anderson, Pincus, Cusack, Kennewell, Longbottom, Coward, Holland, O’Donnell, Hutchison, and Parahi. The Fiji versus NZ clash is sure to add spark to the fireworks in the capital city. Finally, Baber has named a sold line-up. Alongside the brothers he has included the likes of Josua, Cakaubalavu, Derenalagi, Botitu, Nacuqu, Terio, Tuimaba, Ratu, and new comers Matai and Kuruvoli. This should set the platform for an exciting Dubai 7s. All the best boys! Rajnesh Ishwar Lingam Nadawa, Nasinu

Our Prime Minister said that the rumours of no money in Government were false, then why is the local government minister wanting to increase city rates? John Brown Drasa Vitogo, Lautoka

Uncle Allen, let’s climb, the mountain that is. Get to the top and mix it up. The brown stuff I mean. Knowing you, it will be a ‘thumbs’ up mix. We wash with the brew after we roll down eh? Joske’s brew that is. What say you, unclllle! MANOJ LAL PATEL Drasa Avenue, Lautoka

Despite the drama that unfolded at the Flemington racecourse, I believe our local punters and those who took part in the fashion show enjoyed themselves to the moon. I had a good time watching the show thanks to Fiji One and I must commend the organisers and participants as it was a sea of colours! Local women took their talent to the stage and showcased what they were capable of. As for punters, there were those who smiled and walked away with cash while some scratched their heads in disappointment as the horses that they placed their bets on missed the cut. Nonetheless, the Melbourne Cup as usual brought the world to a standstill as we were entertained by 24 horses. Congratulations to local horse Vow and Declare ridden by jockey Craig Williams for winning the race that ‘stops the nation!’ Cheers! Rajnesh Ishwar Lingam Nadawa, Nasinu

As almost anything can be forged nowadays to take advantage of the unsuspecting, how many individuals in Fiji know which travel agents are reliable? Mohammed Imraz Janif Natabua, Lautoka

Is the Fiji police still using walkie talkies as a means of communication while on duty? Or are they relying on mobile phones which is time consuming and require available funds to communicate. Pita Soroaqali Nadarivatu