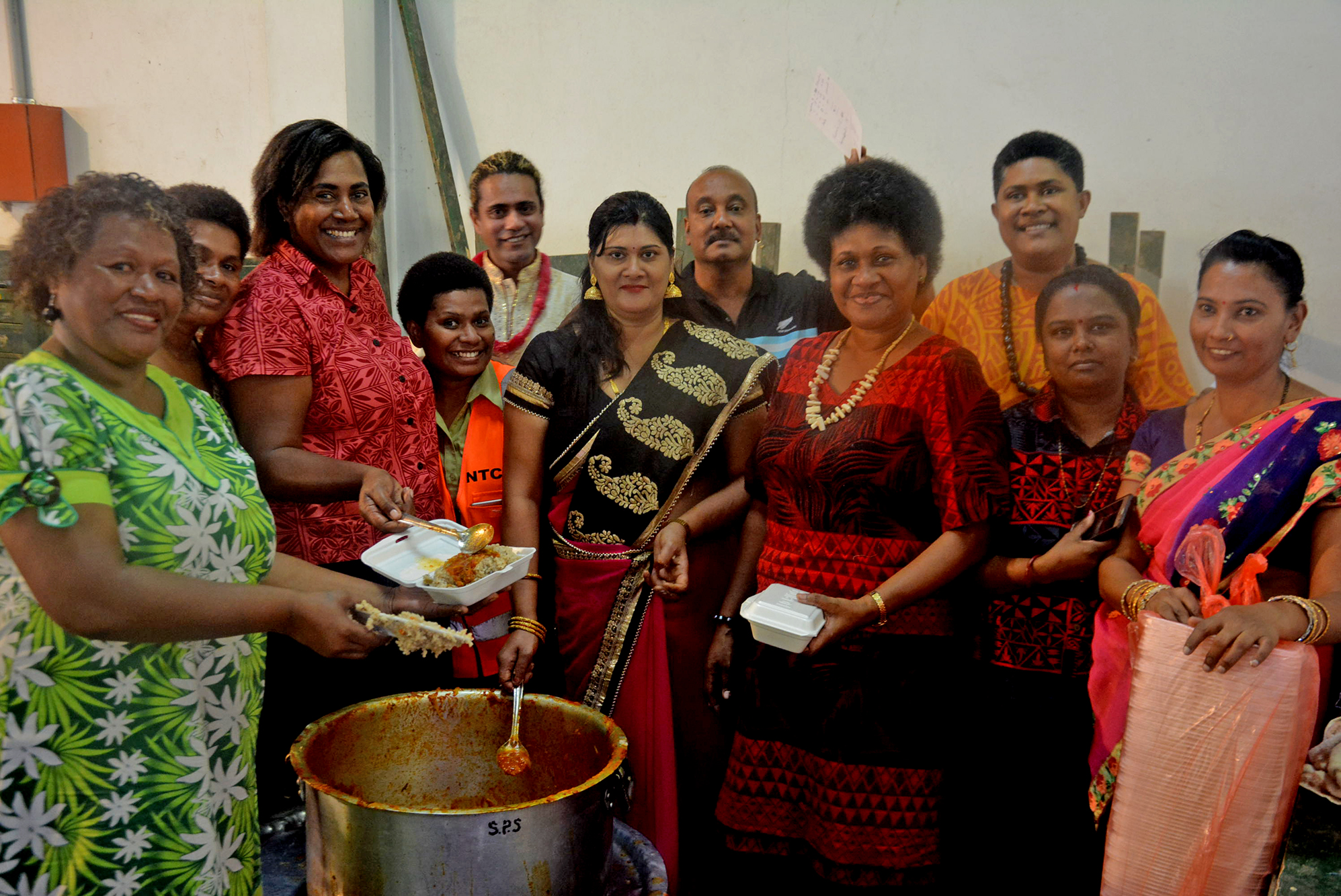 Happy Diwali to all
The globally celebrated and I believe densely commercialised festival of lights has once again descended upon us. Scrumptious vegetarian delicacies, mouth-watering sweets, elegant traditional costumes and patakas would be the order of the day to observe the darkest night marked on the Hindu calendar. May goddess Laxmi shower her blessings of peace, prosperity and good health on you all. Happy Diwali. “Aunty sweets?”
Nishant Singh
Lautoka

‘Friendlier solutions’
I am glad that few parties have come up with the solution of getting rid of the TELS education system and have come up with some friendlier solutions. Now, they can vouch for greener pastures. It’s good to see that some party are after the agriculture sector which was full of promise but not materialised. This can be the best source of income if the Government concentrates on it. It’s funny to see the high cost of living in the country, especially baby’s food and milk. It’s so expensive! I wonder if this present government has a heart for our infants. I wonder why the Government is giving out grants to people for no reason at all. If the money is from their own pocket then it is OK with me, but if it is from the people’s pocket like me, then I need answers. By the way, good luck to the recipients. However, I am still waiting if someone is going to slash the PM’s $3000 a day allowances. Wow! Some politicians are not resting on Sunday. Why?
Usaia Tagi
Delainavesi

Truth revealed
I believe there were many uncertainties around the reviewed 2013 Constitution which was put together by the Constitutional Committee chaired by Professor Yash Ghai and was widely consulted to reflect the “will” of the people. There were rumours that it was not accepted when it was in its final stage, others were saying that it was burnt, nevertheless, the truth is now being revealed by the FijiFirst party leader Mr Bainimarama in an article highlighted in The Fiji Times 05/11/18 titled “Draft law had to be burnt”. Mr Bainimarama said and I quote: “The draft constitution that Professor Ghai and his team compiled was still racially discriminatory, it had to be burnt when it ended up in the rubbish bin.” I for one participated in that consultation done by Yash Ghai and his team when they went around Fiji seeking people’s input into the proposed draft 2013 Constitution. I must say that it was a joyous occasion for we the ordinary people were being valued to be consulted for our proposals of what we wanted reflected in the constitution. Now hearing Mr Bainimarama saying my efforts and that of many others ended up in the rubbish bin and had to be burnt is not easy to swallow for we now can clearly see that we are of no value to him and his government. Furthermore, with the reason given by Mr Bainimarama that the constitution Professor Ghai will come up with will not agree with what he wants done, so it has to be burnt, raises the question, whether the constitution should reflect the “will” of the people or his “will”? Since now it is public knowledge that the widely consulted draft 2013 Constitution that was prepared by Professor Ghai and his team was thrown away to be burnt, can the government be clear with us by answering these questions:  Who is the architect of our current constitution?  Who was consulted before it was put together?  Does it reflect the “will” of the people? I would love to know the truth.
Kositatino Tikomaibolatagane
Vuninokonoko Rd, Navua

Social wages
I don’t buy the Minister of Economy’s social wage flyer. The Government should empower its people. I believe that growth can be stimulated by strong private (individual) participation. Instead of a superficial growth driven by “consumption” that is mostly funded by government handouts, we should promote growth that is stimulated by “investment”. Investment, I believe, is a product of strong “savings”. People cannot “save” if they are not earning enough. We need a “living wage” rather than “social wage” to be able to “save”. I believe social wage creates a new brand of “slaves”.
Utiko Nabunobuno Lautoka

Times’ dominance
THE dominance of this newspaper and its website as providers of election information subduing the other newspaper (FT 05/11) is impressive. With 78 per cent proclamation, I hope they will make awareness of truth to emancipate people. The other providers were low in rating by the people.
Amenatave Yaconisau Palm Drive,
Delainavesi

Street lights
I am glad our politicians are telling the people that they will put street lights in rural areas. May I also ask them to please fix the street lights along Vomo St because most of the lights on that street are not working for the past year.
John Brown
Drasa Vitogo, Lautoka

Horse and all
To all the punters, betters and such. Good luck and may your horse be with you.
Manoj Lal Patel Drasa Ave, Lautoka

Municipal elections
I believe the elected councillors were sent home in 2006. After the 2014 General Election, I believe a statement was made that the minister will ensure council elections took place. Subsequently, when quizzed on numerous occasions by the media and the general public, the minister assured us that the government was working on reviewing the municipal Act. I believe it is 12 years down the line and still no local government election. I am not able to vouch for the services of other municipalities, but as far as Nausori Town Council services are concerned, I believe the services have deteriorated from bad to worse. I had repeatedly complained to the council regarding blocked drains, the long and uncut grass and the extremely poor state of the children’s park in Dilkusha (Amar Singh Rd). I had emailed the minister responsible, his permanent secretary, the town council, the Fiji Roads Authority and the chief health inspector for the Ministry of Health. That was in June 2017. I am thankful to the Minister for Health for sending her team to look at the complaint in August 2017. However, to date, the Nausori Town Council has failed to attend to any of the above complaints. I am bubbling with joy that two political parties have assured us, the ratepayers, that they will ensure elections for local government. Oh, by the way, Diwali is on Wednesday 07/11 and I am still waiting for a notice from Nausori Town Council for the “special garbage” collection day, so we could put rubbish by the roadside. Happy Diwali to all.
Arun Prasad
Dilkusha, Nausori

Minimum wage rate
I am not advocating for anyone or any party here. The national minimum wage debate has constantly been blown out of proportion by political opportunists and unions (now also political opportunists). The $2.68 per hour must not be mistaken or confused. I am not an economist, and neither am I dumb, and I get it. Wage sectors have already got their minimum wage rates and I will not list them here lest I also start re-telling news like some regulars do on these pages. The national minimum wage rate of $2.68 per hour is already very decent. How on earth would it be financially viable for my pineapple farmer friend to start paying his labourers $2.68 per hour for eight hours a day? That would be $21.45 a day. He actually pays his men $15 a day, and the men never work for more than six hours a day, sometimes they work for three hours a day, on some days when it rains unexpectedly, they work for one hour but still get paid $15. If my farmer friend were to pay $4 or $5 or the hilarious $10, he would have to sell the farm in no time and I would have to think a hundred times before trying to buy it. Fellow citizens, please get the picture. The $2.68 that we currently have, if strictly implemented and followed, will cause panic and chaos. Babysitters, house girls or maids, gardeners and farm labourers among a few others are currently getting $12 to $15 per day on average and they are pretty satisfied with the pay which comes with meals on most occasions. My farmer friend has cousins who are farmers as well and who keep telling him to pay $12 and provide food. He isn’t listening, not yet. I have absolutely no interest in listening to political jargons, gimmicks and I have not bothered trying to know the who’s who of each party. I do, however, have an interest in sensible debate, and most talks out there are as nonsensical as they can get. When a party talks about increasing the national minimum wage rate, they seem to be deliberately misleading the voter public, some of whom are still very much gullible. I would rather keep the minimum wage at $2.68 and increase the minimum wage rates in each sector instead. For example, the minimum wage in the construction sector is a little more than $3 per hour. I would rather attempt to increase that, but with proper appraisal and wide consultation. Imagine a gardener getting $5 an hour. Instead of finishing his job at a fixed agreed rate (of $15) in three hours (on “task” basis), he will slug along for eight hours and claim $40 for the same work that can only be quantitatively argued and justified as being for three hours. Putting aside the $5 per hour, the gardener works earnestly for three hours, gets his honest wage, goes home by 11am, eats, rests and embarks on his next job in the afternoon to another site, for more money. Bringing in the $5 per hour, he slugs along, gets his dishonest wage, hits his employer badly in the pocket and drastically lowers his own productivity. Politicians, please, keep it honest. If you go around campaigning —please let people see the lustre in you, intelligence and honesty. Campaign on facts please. If something is broken now or is breaking, or may potentially break soon, then tell us your plan. Nobody will steal your plans if you tell them now (if you lose the elections). Even if the winning party does steal your plan (campaign manifesto), then you must be proud to have effected a change. Hilarious campaign speeches do not entice me. As for the NMW, parties please keep it clear and honest. Don’t hoodwink the people into believing something that’s not workable in our economy. If you tell me that your party will ensure that I will get uninterrupted Sky TV, I will lend an ear.
Donald Singh,
Lautoka