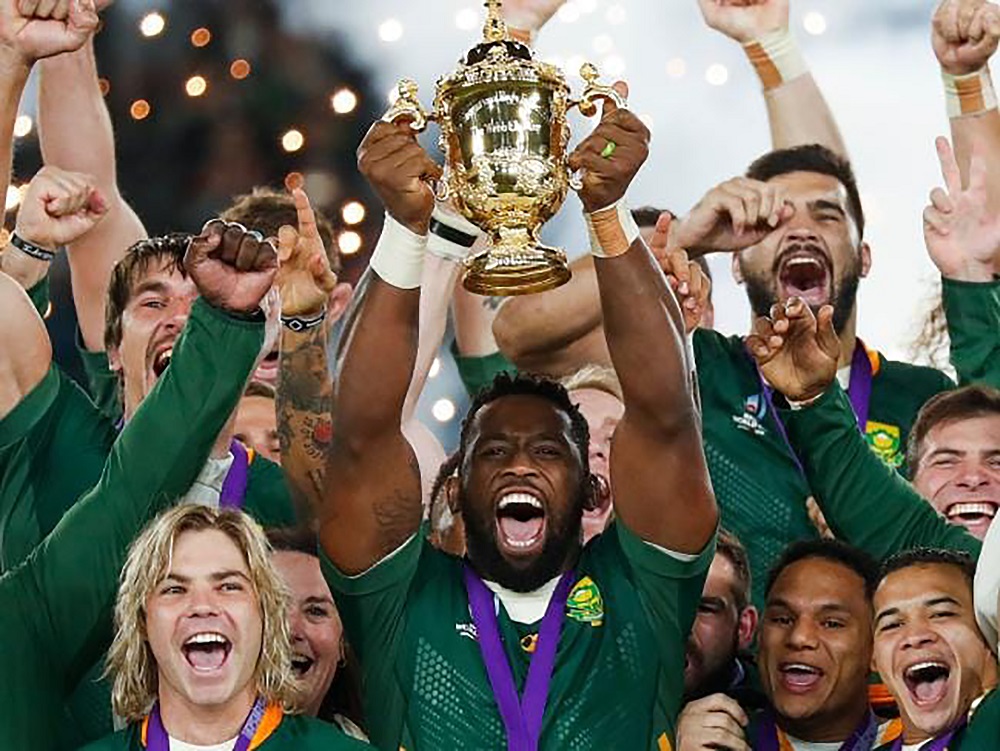 Captain Kolisi and his brave men

WHEN the Springboks lost in their opening pool match to most people’s favourites, the mighty All Blacks, who would have thought that Siya Kolisi would go on to become the first black captain to hoist the William Webb Ellis trophy. Donning the famous number six jersey, the same number worn by 1995 winning captain Francois Pienaar who received the trophy from Nelson Mandela, one of the world’s greatest leaders who came out in Springbok attire that day, Siya Kolisi and his team have united and inspired the Rainbow Nation once again. The former captain was present in the stands to join the voices behind their team. The Englishmen, who denominated the same team which the Sprigboks had lost to, succumbed to the pressure. They had no answer or questions to their opponents attack and defence. With the millions waiting back at home to rejoice with the team, there is a certain someone smiling from above. It is a Springbok victory for the heavens. MOHAMMED IMRAZ JANIF Natabua, Lautoka

FOR the past couple of Saturdays in October, I read with interest John Kamea’s history columns covering The Fiji Times 150th birthday. I was unaware of RW Robson’s role in modernising the newspaper though his name rang a bell. Decades ago I had read Robson’s book “Queen Emma”. I knew he founded the venerable Pacific Islands Monthly magazine in Sydney as I was a frequent PIM reader from the early 1980s until the final issue, Vol.70 No.6 dated June 2000 edited by Sophie Foster with the face of George Speight on the cover, published here in Suva. There is no Wikipedia page dedicated to RW Robson, unlike Sir Thomas William Alport Barker CBE who preceded Robson as owner of The Fiji Times. But Pacific Islands Monthly can be found in Wikipedia where a link is given to the National Library of Australia’s Trove website. Robert William (Robbie”) Robson FRGS (1885-1984) was apparently an ardent communist for at least part of his long life. A digital copy of his “Communism, an outline for everyone” published 1942-1944 can be downloaded from the Trove website. What’s more the entire archive of Pacific Islands Monthly magazines from 1930 to 2000 has been fully digitised and can be freely perused online or downloaded from the Trove website. It is a treasure trove covering 70 years of Pacific history from month to month as broadcast radio, world war, aviation and finally television wrought fateful changes to life in the islands. Aside from the advertisements, PIM magazines contain book reviews, letters to the editor, shipping and yacht news, philately news with stamp illustrations, and in later years colour photographs as well as reprints from a growing variety of news media throughout the Pacific. Searching the Trove archive I found part of the first letter I wrote to The Fiji Times reprinted in the December 1986 issue of Pacific Islands Monthly wherein I warned that commercial television could have a devastating effect in Fiji. I likened it to a hurricane that would impact everyone here. I thought growing up with commercial broadcast TV in the USA, then travelling overseas where television had not yet spread gave me some special foresight. At the end of my 1986 letter to The Fiji Times I smugly predicted one of the two daily newspapers here would be wiped out in the approaching television hurricane while the survivor would print our daily TV guide. Wrong on both counts! To its credit the original Fiji Sun refused to submit to censorship and ceased publication in 1987. Later that year Fiji’s Daily Post became the second daily paper and survived until 2010. Meanwhile, a new Fiji Sun arose in 1999 and thrives now as the right paper for the current government. As for our daily TV guide, for the past several years I have not seen any complete free-to-air television program listing in either the 150-year-old The Fiji Times or the 20-year-old Fiji Sun and only discovered recently how to find it on screen with the Walesi remote control. My predictions certainly can’t be trusted, but I reckon sales of the print versions of both dailies will increase next year when plastic bags are banished and newspaper is needed for more than suki. WILLARD MILLER Suva

IT’S interesting that the madam minister has justified the proposed increase of town and city rates. She says “without money we cannot function, we need to control wastage and streamline the system. “On the other hand we need to look at how we can increase some of the fees and charges so that we are not highly dependent on the State.” You are so true madam. But are you also referring to the many who earn $2.68 an hour? They have been earning that for so long, they eat the cheapest kind of foods, they get NCDs Are these the people who will also foot the bills to run the municipalities? By the way, is there any more of those freebies left over? If there is don’t keep it, give it to the municipalities so they can up their services. But then again if you gang hadn’t given so much pre-election, you could be giving it to the municipalities. ALLEN LOCKINGTON Kava Place, Lautoka

AN airworthiness directive has recently been issued in the USA for mandatory checks on Boeing 737 NG aircraft that have exceeded 30,000 operational cycles. The issue is cracks being found in the wing attachment structure of all types of NG aircraft, of which Fiji Airways operate four, one series 700, the other three being series 800. Qantas have found cracks in two or three of their aircraft, all of which have done less than 30,000 cycles. No doubt Fiji Airways will have their aircraft checked at some stage. The issue is repairable but at some cost and the aircraft are apparently quite safe to operate but it is just another issue that Boeing could do without. Currently it looks like the MAX8 series aircraft will not take to the skies this year, and some countries are adamant at the moment anyway, they will not allow them in their airspace. Perhaps the new A350 aircraft Fiji Airways are bringing in may find a use after all. ALLAN LOOSLEY Tavua

ASILIKA Wise’s interesting historical opinion piece “A Blessing or Woe” in FT 02/11, concluded as follows “business structures that protect and engage Indigenous Fijians should be encouraged. The current tax system in Fiji provides exemptions for overseas investors” and then goes on to suggest “how about some thought be given to exemptions or lower tax rates for iTaukei businesses to assist with growth in this area”. We seem to have come full circle with this suggestion. The suggestion seem to be promoting the affirmative action policy that was very much part of the 1990 Constitution. It will be recalled that this policy was based on the view that indigenous Fijians were being disadvantaged in our society and that their lot needs to be uplifted to at least be on par with the other two ethnic groups in our society. That policy was never promoted again mainly because it went against the grain of the “multiracialism” platform in the 1997 Constitution and the “common and equal citizenry and national unity” platform in the current Constitution. The piece seems to suggest that based on the interesting history mentioned therein, there is apparently no other way to uplift the lot of the Indigenous Fijians, but to implement the suggestion she advocated above as the way forward. Unfortunately, the suggestion may not sit well with the “inclusive” directions and united approach currently being taken. I wish her luck anyway. EDWARD BLAKELOCK Admiral Circle, Pacific Harbour.

AMERICA’S founding fathers were visionaries. They put in place a mechanism having a vision that some day a president may put national security in favour of their personal interest. They call it impeachment. I wish we could adopt something like that. ALLEN LOCKINGTON Kava Place, Lautoka

WHY accept jobs where dignity and self respect is removed? DAN URAI Lautoka

AS an ardent All Blacks fan, I congratulate the darlings of rugby for winning the bronze medal in Japan. Not the one NZ fans wanted, but I guess we can’t be champions every time. Good luck to the mighty All Blacks and farewell to the great rugby servants — Ben Smith, Hansen, Read, Todd, SBW and Crotty. Go NZ! RAJNESH ISHWAR LINGAM Balgovind Rd, Nadawa, Nasinu

I SUPPOSE the haka challenge affected England in the final, instead of semi-finals. SHAMAL CHAND Kuku Bau Rd, Nausori

ACCORDING to the Local Government Minister, the contribution made by municipal councils of the past to the national economy cannot be measured because of insufficient data. Then how is it possible for the Attorney-General to conclude that municipalities had for decades languished in very barren intellectual space? What is his demoralising observation based on? MOHAMMED IMRAZ JANIF Natabua, Lautoka

I’M sure the Minister for Local Government doesn’t know that the city rates have increased with the unimproved capital value of land which is carried out by town or city councils. As soon as the valuation goes up the rates go up so the minister can’t say that the rates have not increased for a long time. Maybe the minister needs to check first before making comments regarding city rates. JOHN BROWN Drasa Vitongo, Lautoka