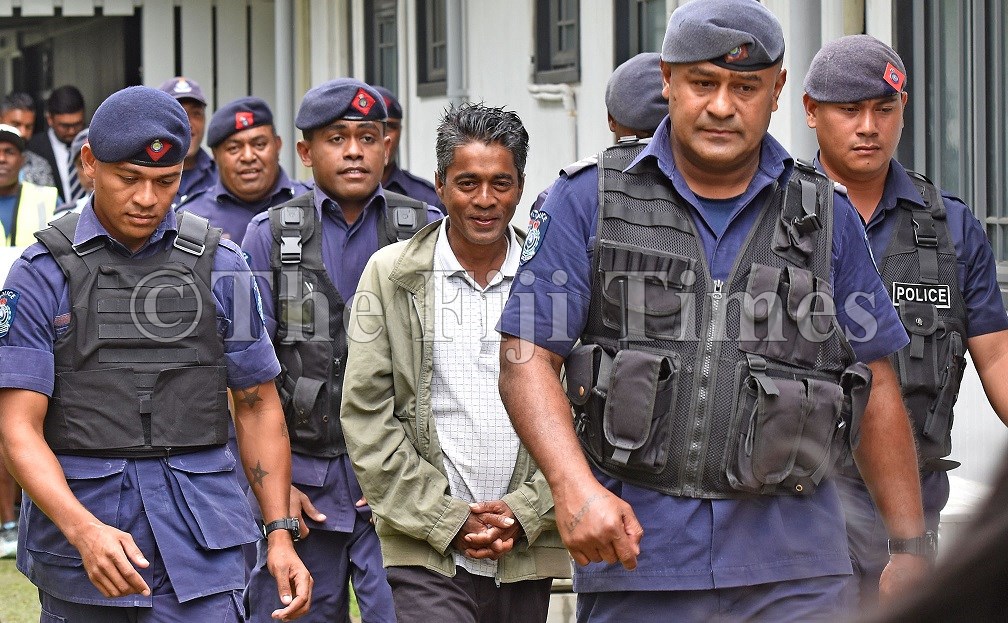 WHEN I saw the picture (FT 28/11) of eight burly police officers escorting Kishore Kumar I said to myself, it’s either he is very dangerous or to protect him from the number of people who would like to kick him in the ‘men’s department.’ ALLEN LOCKINGTON Kava Place, Lautoka

COMPLETELY eradicating the kerekere syndrome, as stated in FT 28/11, could be a hard ask. In my humble view, it is quite difficult to stop something that is intrinsically part of a communally- based and driven traditional way of life. It is a “necessary” cog in the communal wheel, without which the whole wheel will most likely fall apart. What should really be eradicated is its misuse and abuse, so to speak. In other words, being overly dependent on others when you have the means around you to fulfil your needs should not be encouraged. We see a lot of examples of the mentioned misuse and abuse in today’s society in both the rural and urban environment. It also does not help when the system itself at times seems to encourage it directly or indirectly. Standing on one’s own two feet and utilising what is available and around us- at the individual and community level can help us out of the total dependency syndrome. In the process of satisfying our needs we in turn help to provide support and strength to the community itself. EDWARD BLAKELOCK Admiral Circle, Pacific Harbour

SATISH Nakchad in his letter (FT 28/11) highlighted the unsightly vehicular scrap heap at Boila Circle in Valelevu, Nasinu. This seems to be a common sight throughout the country, particularly on roadsides, roundabouts and vacant properties. There is a similar line of a dozen or more wrecked vehicles on the Queens Rd past Togalevu out of Suva. along the roadside of the small hill climb before Naboro. It has been there for many years now and has certainly survived the “Litter Police” and the related offence provisions under the Litter Decree, as well as the Environment Management Act. In our efforts “not to leave anyone behind”, there are some among us who continue to leave things and waste behind, as we move forward. Sometimes, it is good to look back and clean and clear the path we had trod on, so that when we move forward, we do so without leaving “waste” behind, as our footprint. EDWARD BLAKELOCK Admiral Circle, Pacific Harbour

SOME four decades after my published letter on the “waicala grog” coming out of the taps in Savusavu — which drew the concern of the then Ombudsman -— a writer (FT 28/11) is still drawing public attention to the poor quality of water supply in Savusavu. Now that’s something that’s been in the pipeline for a heck of a long time! RAJEND NAIDU Sydney, Australia

I HEARD with deep sadness about the passing away of the late master Ratu Tevita Momoedonu. I got to know him on a personal basis through my late father, Mr SV Chetty. They were both teachers at Namaka Public. He served his country, district, village, Ba Province and indeed had a strong presence and ‘mana’ befitting a chief. Of course the pinnacle was his appointment as prime minister of Fiji by none other than our late statesman and president and prime minister, the late Ratu Sir KKT Mara. He never had seemed to show his title ever. We would meet almost every weekend and became great friends. I had a strong connection with the people of Vuda and Taukei Nakelo during my days in Fiji and lease of Kadavulailai Island for my cruise business in the ’80s and ’90s. Ratu was always a compassionate man with fortitude and wisdom. He was a natural leader. My heartfelt condolences to Kolora and children and the entire vanua o Vuda. Isa Master Te, moce mada Ratu. May his soul rest in eternity. VIMAL ROY CHETTY and family Seattle, Washington

I BELIEVE in politics popularity of a candidate is determined by the number of votes they received during national elections.
DAN URAI, Lautoka

WHEN the State time and time again fails to continuously deliver water to the people, it makes one think whether water is our basic need or our basic problem. KIRAN KHATRI,  Samabula, Suva

LET’S continue reading for life and promote libraries and nurture book reading. Keep technology as a tool, not a replacement for reading books. Reading is to mind as exercise is to body. TAHIR ALI, Hamilton, New Zealand

SUNDAY, the 22nd of November, 2020, Rewa and Labasa played their first pool game in the Fiji FACT at the ANZ Stadium. The fi rst half was a toe to toe and tik tok and scoreless. In the second half, the floodgates opened and four unexpected goals galore.
This Sunday we predict a repeat in seven days at Subrail Park with the reverse to happen. Labasa will have a perfect chance within seven days to reverse the result. The score may not be the same but a 2-1 result will settle the score for the Lions. Diehard fan Raj Lingham, I am predicting this on Saturday afternoon and come Monday morning hope the result will please every Labasan in Fiji Joka dina na soccer i Viti kei na vuravura. SHALWYN PRASAD Mukta Ben Place, Nabua, Suva

DURING these times, it would be best for the ground maintenance team in Labasa to seek assistance from the Ministry of
Agriculture. MOHAMMED IMRAZ JANIF, Natabua, Lautoka