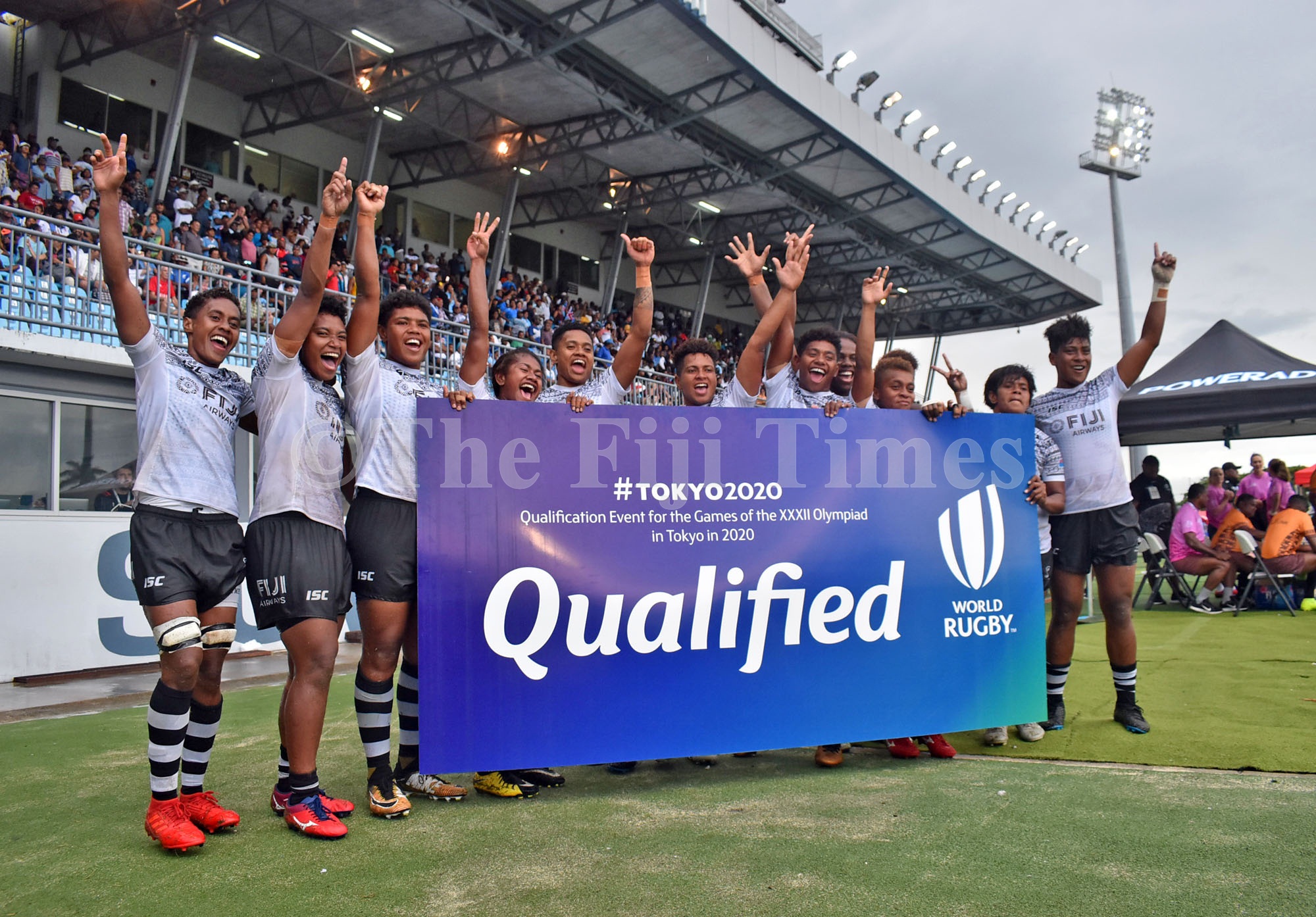 The Fiji Airways Fijiana sevens team celebrate after beating Papua New Guinea to qualify for the 2020 Tokyo Olympics during the last day of the 2019 Oceania Rugby Sevens Championship at the ANZ Stadium in Suva on Saturday, November 09, 2019. Picture: JONACANI LALAKOBAU

I BELIEVE the Fijiana deserves a spot in the Tokyo Olympics after the girls put up a spectacular show in Suva during the qualification rounds. The hard yards at the sand dunes made it possible and now that the Fijiana has qualified, they must be treated the same way as our men’s 7s team and I’m pleading with Fiji Rugby Union, including the president of FRU who happens to be our PM, to allocate resources and funding for the Fijiana team so they become competitive against teams such as Canada, the USA, Australia and New Zealand in Japan. The team is coached by former Suva coach Saiasi Fuli and assisted by former 7s reps Jim Volavola and ‘Eyes’ Katonibau, but I’m sure as the girls march into camp for the Olympics it’s possible to secure the short-term services of an expatriate 7s coach who can mould our Fijiana into a winning team. The Fijiana’s (24-12) loss to Australia shows that our girls are capable of beating the giants. Thus, my best wishes and congratulations to the Fijiana as the girls prepare to face the best sides in Tokyo next year! On the other hand, despite losing to Australia, I believe our 7s side did well with new faces while the men in green and gold had an experienced squad. It’s a pity though that Samoa could not beat Australia! RAJNESH ISHWAR LINGAM Nadawa, Nasinu

NEEL Singh’s letter on World Science Day (FT 09/11) and the various international proclamations highlighting the importance of science and technology got me thinking on why there is no discourse and celebration on this important subject locally. The irony is we now have at least four universities in Fiji and a host of institutions offering courses on a range of science-based subjects. These institutions surely should be at the forefront of the campaign to get more students interested in science, which has been found to be languishing in terms of preferred options for many of our students. Surely this would have been an opportunity to preach about the importance of science to development and the career opportunities it offers. The forerunner to the FNU, the Fiji Institute of Technology, was built around the need to provide skills and training in technology, and we seem to hear about all the courses in renewable energy, climate change etc offered by UniFiji, FNU and USP. Is there someone taking leadership to ensure this is disseminated and promoted through learned professional societies and research programs? The paradox is also so apparent when we hear politicians and academics labouring the issue of “evidence-based decision making” in current issues such as agriculture, environment, health, climate change, renewable energy, weather etc. I am surprised that to this day the Fijian Government has not even thought it appropriate to have a ministry that deals with science, technology and innovation. And we want to become the “Singapore” of the Pacific! As former noble laureate Professor Abbus Salam of Pakistan noted in many of his writings, a country that fails to invest in science and technology is doing itself a disservice in terms of development. And this is borne out by data from countries such as China, India, Singapore etc and of course the OECD, that shows a positive correlation in terms of investment in science and technology and economic growth. MANISH CHAND Suva

SO Australia has issued a measles alert for people travelling to Fiji, advising them to check their immunisation status or get a measles jab before they leave. That is their right of course. Itself, Australia has recorded 92 cases this year, which may not include an outbreak in South Brisbane affecting 23 schoolchildren recently revealed. Perhaps Fiji should take a look at travellers arriving from Brisbane. I believe Fiji has a sound herd immunisation approach regarding measles, I hope the health department can locate the primary cause of the outbreak. ALLAN LOOSLEY Tavua

I HAVE to say that we need to embrace daylight saving because if you don’t like it, you have no say. The Government says DLS will happen and it will happen. So, pull up your socks, wake up an hour early and be at peace with yourself. Fretting and fussing over it will take you nowhere. Embrace it and look for the positives in it, I have. ALLEN LOCKINGTON Lautoka

THE issue soon by the Education Ministry of electronic copies of contracts, transfers and appointment letters to close to 13,000 teachers scattered all over Fiji (FT 8/11), will indeed be a remarkable achievement. This development of course assumes that all our teachers have access to the internet and the electronic means to enable this communication system to work both ways, especially for teachers in the schools in the more remote locations on the main and the smaller outlying islands. I hope there are alternative cost effective arrangements for those who don’t have access to such luxuries and that no one is actually being “left behind” in this moving forward process. I just have the feeling that there are still a large number of our teachers in this category. I guess by now, electronic hardware such as a laptop, smartphone or tablet should be part of a teacher’s “must carry” item, especially for postings outside their areas. EDWARD BLAKELOCK Pacific Harbour

GERRY Popplestone (Southeast Asian Times 10/11) informs us that no one at the recent ASEAN leaders meet strongly criticised Aung Sung Sui Ky for failing to improve the conditions in Myanmar so that the Rohingya who fled to Bangladesh to seek refuge from the atrocities — mass murder, burning of villages, rape, looting — committed against them by the Myanmar State military force could return to their homeland. Is anyone surprised by that? No one should be because it has become pretty much the norm for leaders at such international and regional meets to dodge the hard questions requiring of them to do what’s right and to dwell instead on what is politically expedient. We see a not dissimilar situation in the case of the West Papuan struggle for the right to live as a free people. It’s a shameful sidestepping of the hard issues. RAJEND NAIDU Sydney, Australia

IT’S here and it’s for real. Whether one likes it or not, DST has kicked off. It’s in the interest of every Fijian to quickly acclimatise to DST and be on alert and switch on mode. I’m sure that there will be some time in the afternoon to flex those muscles and flush that extra energy. Happy DST people! RAJNESH ISHWAR LINGAM Nadawa, Nasinu

WHILE most people choose to dispose the by-product of kava mixing, I heard people from a particular area have come up with a new way of making use of it. When they collect quite a bit of it, they head off to the nearest pothole and dump the kosa in it. MOHAMMED IMRAZ JANIF Natabua, Lautoka

WE have Aussie Rules competition here. Some players have been drafted into Australian clubs, but no media attention. DAN URAI Lautoka

WHO will pay the $15 million debt that the town and city councils owe the Government? I hope it is not the ratepayers. We did not ask for any new footpaths, roads, new streetlights or new fish markets or grog saloons. SUKHA SINGH Labasa

POLITICIANS are often practical, they just use ideology to get what is needed. The scary ones are the ideologues and are usually in it for ego. AREKI DAWAI Suva

BY asking the Minister for Local Government “why should the ratepayers pay for something where they have no say” (FT 10/11). Nardeo Mishra raises that age old political slogan “no taxation without representation”. Wonder if the minister has heard of that? RAJEND NAIDU Sydney, Australia

IT is a bit rich for Mr Sayed-Khaiyum to say municipalities have been “languishing in barren intellectual space”. Either it is untrue, as in the case of Labasa, according to former mayor Charan Jeath Singh, or else responsibility lies with those who appointed unelected special administrators in the first place and did nothing to address their failings and the needs of those they were appointed to serve. CHRISTOPHER GRIFFIN Perth, Australia