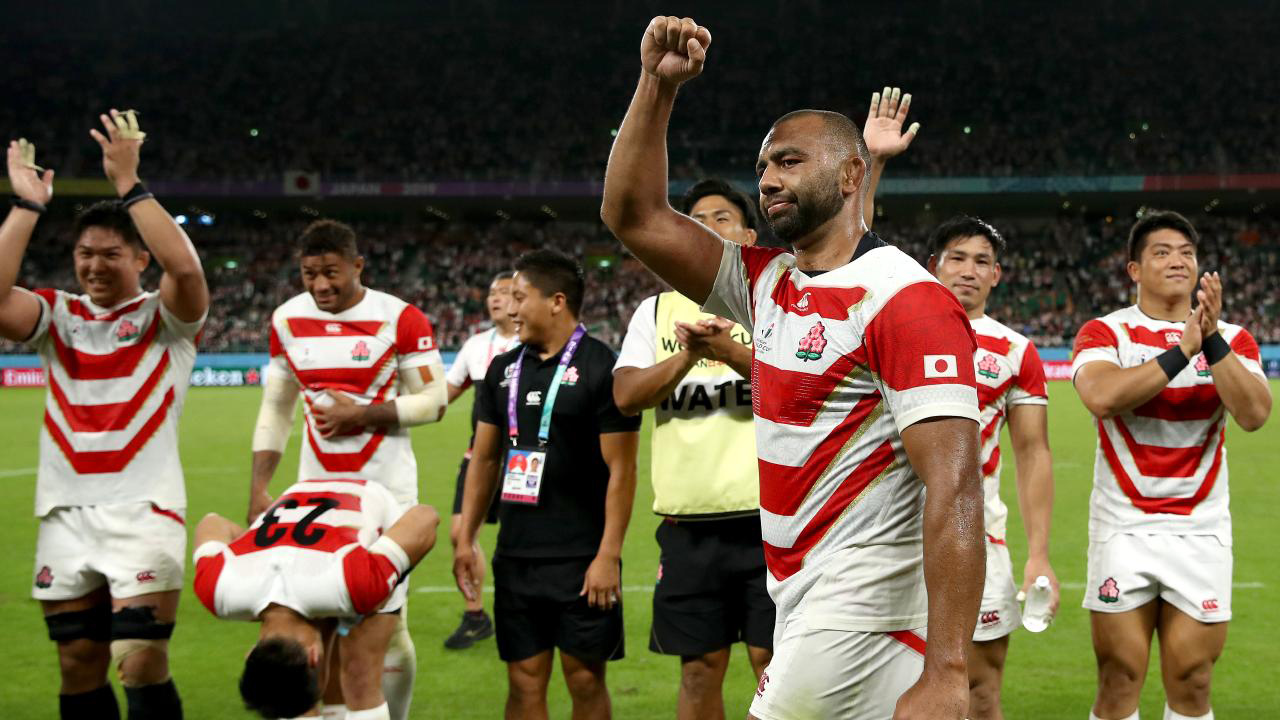 Japan Captain Michael Leitch and his players thank their fans after defeating Scotland in their last pool match at the International Stadium Yokohama in Japan. Picture: AFP

I WISH to add to the accolades being given to the various teams in the 2019 Rugby World Cup. We have outstanding players and improving players. We have good defenders and good thinkers who put the speedsters to zoom off to score. The creators of opportunities usually get the prize at the end of the game. May I add my thoughts and say that Japan is the most improved rugby team in world rugby. They even made a statue of their captain, Michael Leitch, for the effort and inspiration that he gave his team. Of course we must also acknowledge the coaching staff members, but Michael is where the tough stuff happens. He is down among his tough men where blood and guts are put on the line. ALLEN LOCKINGTON Lautoka

I WOULD like to express my frustration with the air pollution caused by the Lautoka sugar mill. While I understand the value and economic need for the operation of the mill, it does not mitigate or eliminate the need for the mill to endeavour and ensure that it does not cause excessive air pollution which can impact upon the health of the community living nearby. I am a retired citizen living within a 10km radius of the mill, and unfortunately have pre-existing asthma. During the sugar crushing season, my asthma condition is exacerbated by the particulate matter (like soot) emitted constantly by the mill chimneys. We (my wife and I) are unable to open our doors and windows for this very reason. In addition, our outside areas (eg. our porch) and window ledges are covered with particulate matter daily. With the Government’s apparent commitment to deliver climate action and the development of the Climate Change Act, what is being done to control and monitor this obvious source of air pollution which is causing impacts on public health? I implore that the responsible department and people look into this matter with some sort of urgency. MOHAMMED HASSAN Natabua, Lautoka

THE Minister for Local Government has said that there would be an increase in council rates. May I ask her why should the ratepayers pay for something where they have no say? Please explain. NARDEO MISHRA Suva

AFTER the 2019 Rugby World Cup my mate, Reddy ,and I had a basin of kava. I asked for his All Blacks jersey since he no longer wears it. He said, “Al, it still fits me.” The rest of his comments can’t be printed. ALLEN LOCKINGTON Lautoka

THE blue e-ticketing transport cards which are meant for school students are highly abused when students opt not to attend school after year-end examinations. These blue cards are placed inside wallets, mobile phone cases or held at the back of the red e-ticketing cards to avoid visual detection. Apart from the time limitation, the blue e-ticketing cards should be locked at the student fare amount so that adults are not able to use them. MOHAMMED IMRAZ JANIF Natabua, Lautoka

RICHARD Barnes (FT 09/11) says, “I am with the protesters”. Me too. And for good reason. We are confronted with an unprecedented climate emergency. The time for polite dialogue is over. It’s time for concerned citizens the world over to maintain the rage for climate change action now! RAJEND NAIDU Sydney, Australia

THE World Science Day for Peace and Development (WSDPD) is annually held on November 10 to raise awareness of the benefits of science worldwide. The WSDPD is also known as World Science Day. The WSDPD celebrations include promoting awareness toward science and its development: q Open days to highlight science’s important role in peace and development. q Classroom discussions to emphasise how science and technology affect daily life. q Arranged science museum visits to commemorate the day. q Visits to local schools on careers in science or scientific presentations. Some governments have, in the past, used World Science Day to publicly affirm their commitment to increased support for scientific initiatives that help society, as well as launch new science policy programs together with scientific institutions, civil society, universities and schools. It was recommended at the World Conference on Science in Budapest in 1999 recognition was required for the need for a new compact between science and society. It was discussed at the conference that a World Science Day would help strengthen commitments to attain the Declaration on Science and the Use of Scientifi c Knowledge goals and to pursue the Science Agenda: Framework for Action’s recommendations. Following the World Conference on Science, UNESCO established the WSDPD through a proclamation at a general conference in 2001. The WSDPD was to be served as reminder of the organisation’s mandate and
commitment to science. The importances of technology nowadays has evolved and Fiji is no stranger when it comes to digital
electronics. NEELZ SINGH, Lami