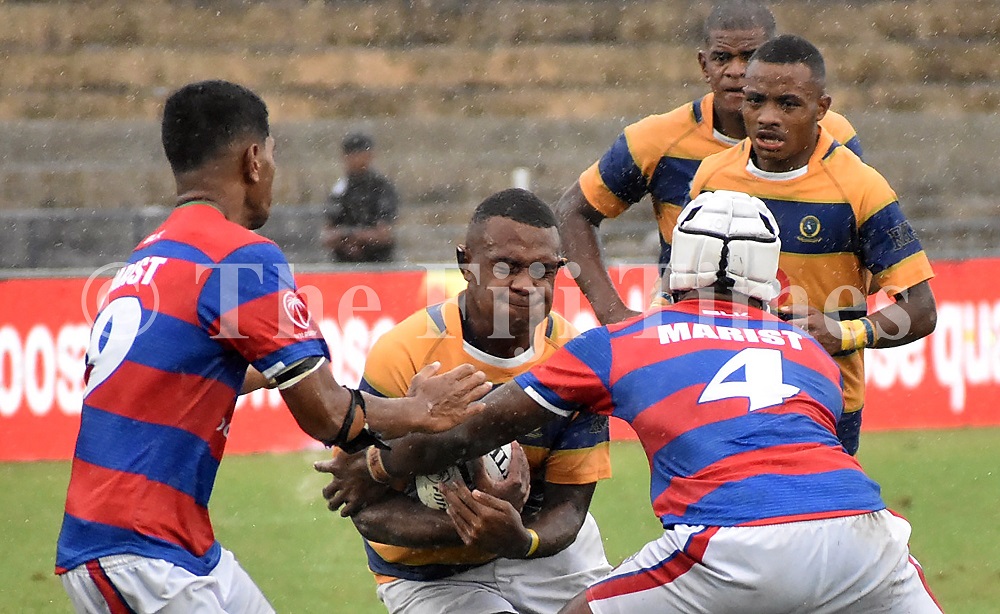 THERE was high level drama at the HFC Bank Stadium when the Deans quarters concluded. Eastern giants RKS, QVS and Lelean bade the competition goodbye. The pulsating finishes surprised many especially when Marist ended the Lodonians’ dominance in the Deans competition. There was a sea of colours as fans filled Suva’s HFC Bank Stadium. In the first quarter-final, Western giants Ba Provincial Free Bird Institute beat Nasinu Secondary School 12-5, displaying a gutsy performance. This set the platform for the other upsets. Natabua High broke Victorian hearts with a come from behind win. QVS led 19-7, but two scintillating and well-worked tries from Natabua resulted in a major upset as the defending champs bade goodbye to the trophy they won in 2019, beating RKS 13-12 at Lawaqa Park. The emotions on the faces of the boys in blue spoke of their pain and disappointment. I must admit, missed opportunities and complacency cost QVS. My good friend and ardent Suva Grammar old scholar Alipate Tuberi ‘Chiuu’ was adamant that the Lions would beat Lelean and they did so in style, reminiscing the 2005 victory as they thumped Lelean 21-8. Grammar fans were all over the Stadium, cheering their hearts out and providing the much needed boost to their Lions. Grammar teacher Makelesi Qareqare was emotional as the Lions made it. Finally, like many RKS fans, I suffered a heart-break as the Lodonians were sent packing home. RKS had a bright start, but then the red brigade from Flagstaff showed they were a tough nut to crack. Marist defended brilliantly and played smart rugby, while RKS was left to rue missed opportunities especially the penalties. I felt the pain of the RKS boys as I am a huge fan of RKS, but I thank them for the great game, and I congratulate Marist for the wonderful win! The loss is hard to digest, but that’s the beauty of sports. My best wishes to Suva Grammar, Ba Provincial, Natabua High and Marist Brothers! RAJNESH LINGAM Balgovind Rd, Nadawa, Nasinu

AS we hear the UN General Assembly speeches and what is being reported from New York, some amazing Pacific leadership in climate change emerges. Vanuatu is currently leading the advocacy for support of an opinion from the International Court of Justice (ICJ) on responsibility and attribution for the current climate crisis. The implications for these will be huge and important for future generations. Micronesians – Presidents of FSM and Marshalls – have been singled out for their statements by respected media like Reuters. Many of the Pacific leaders also attended the recent climate leaders conference hosted by East-West Centre in Hawaii. This was so important for our own issues and to adopt a united stand on important issues in the lead up to COP27. Sadly our own leader was missing as his priority, it seems, was to attend the Queen’s funeral in London. Even our climate change minister did not have time for our Pacific meeting, the responsibility falling to minister Koya. We all can judge ourselves who demonstrates real climate leadership in the Pacific and should be taken seriously. A few weeks ago, we had former presidents from Kiribati and Palau tour Australia and take this important issue of climate security to the Australian government and people. This was a roaring success with scores of media events and such positive responses. Of course this should be consistently done by current leaders and regional organisations. But the ruling elite seem to have their own priorities. And seem visible when it comes to expensive trips and grandstanding at exotic world platforms. ALTAUF CHAND Minto, NSW

OFTEN abusers create a financial situation that makes wives or partners leaving nearly impossible. Survivors sometimes want the abuse to end, not the relationship. A survivor may return to the abuser because that’s the person the survivor fell in love with, and believes his promises to change. But it’s not worth it for women to continue to live in a violent abusive relationships because lives can be lost. According to FWCC’s Shamima Ali (F/T 25/11/21) four were killed in 2020, 10 in 2019, five in 2018, four in 2017, five in 2016, six in 2015 and four in 2014 for the past eight years since 2021. Total of 38 women died. Do you know that a study in America found out that domestic violence reports are higher than the normal daily average on New Year’s Eve and New Year’s Day, with New Year’s Day averaging 2.7 times more incidents of domestic violence than the normal daily average? I wonder what would be Fiji’s case. A good research topic to ponder on? As Fijian men, aren’t you sick and tired of seeing the high rate of domestic violence and rape that is happening in our country almost every day as reported by the media? Are you going to do something about it or will you just witness. women being abused. JIOJI M CAKACAKA Tadra-Votualevu, Nadi

THE digger owner felt good and at last he was able to finish the job. Although a small one, at least he was satisfied that it was done. He will now await the inspection and then the final payment, after the initial instalment. He will quickly follow up on his bid, as a subcontractor on the road project. It was a major road works in the interior and there will be a need for diggers and dozers, way out there. EDWARD BLAKELOCK Admiral Circle, Pacific Harbour

ON September 28 World News Day will be celebrated across six continents. Some 500 newsrooms of varying sizes and media organisations will make a concerted effort to spread the good news that journalism matters. Therefore, the journalists have a vital role to play in this massive communications industry. The theme for this year is: “Journalism Makes the Difference”. Yes, fact-based journalism and journalists matter in this global village. Live broadcasts will emanate from Zaraogoza, Spain. The intention is to enlist the services of journalists from various corners of the earth. The Editors Forum stands up for a free press to provide quality journalism to its clients. Newsrooms are a hotbed of activities. There you will be able to see the latest trends, innovations, transformations, tools and best practices in operation, blogs, newsletters, meetings, networking and research. Therefore, journalism makes the difference and it is worth promoting and defending. In the growing complexities of the world the positive impacts have contributed towards effective change. Modern audiences want instant and credible voices so that they can make sense of developments taking place. Professional newsrooms make a difference in interpretations of events, help people join the dots and make them see the perspective. Without facts freedom and democracy can fail. Therefore, journalism does make a difference in the lives of individuals, communities and countries. Yes, trustworthy journalism can impact the future of the planet Earth. The digital revolution has dramatically altered the connectivity game. People can now use social media effectively to challenge ideas put forward by others. It empowers people to connect in ways never possible before and enables users to maintain friendships across time and distance. It is enabling unprecedented levels of communication, social interaction and community building. During the COVID-19 pandemic and lockdown ushered online connectivity which became very important: online teaching and learning, online work from home, online buying and selling and myriads of other online activities has changed the communications game forever. Therefore, we can safely say that journalism makes the difference. Happy World News Day. DEWAN CHAND Donu Place, Namadi Heights, Suva

THE Fijiana earned accolades as the side held third-ranked Canada nil-all in the first half. However, the experience and fitness of the visitors took them through 24-7. Our scrum was our downfall as the visitors took advantage and utilised it to come back into the match. The Fijiana frustrated the Canadians, but as pressure took its toll, gave up. However, heading to New Zealand, valuable lessons were learnt. The Fijiana should expect a tough forward battle when the side battles England (ranked 1st), South Africa (ranked 11th) and France (ranked 4th). I’m confident that the team management with the likes of Greg Smith, who captained the Flying Fijians and has a wealth of experience as a forward, Asaeli Tikoirotuma, who played for the Flying Fijians and the Chiefs, Inoke Male, who played for the Flying Fijians and coached Tailevu, Mosese Rauluni, who was part of the 2007 RWC team that made the quarters, Tikiko Namaua, who is the trainer, and mentor Senirusi Seruvakula will address the shortfalls. RAJNESH LINGAM Balgovind Rd, Nadawa, Nasinu

NO you are wrong Rajend. The smooth transfer of power took place in 2006. Hon Voreqe Bainimarama and his government came into parliament by taking part and subsequently winning a democratically held elections in 2014 which was free and fair. Before that from 2007 to 2013 there was no Parliament. So to see the Parliament one has to first win an election. He won the election on a level playing field. He could have lost it too. That was some eight years after the take over. Tell you what Rajend, it was a huge and an overwhelming victory that could not have been possible without the overwhelming support of a wide cross section of the populous. It was an indication of a broad acceptance and endorsement of the events of 2006 and the reality of the situation. TARUN TIKARAM Lami

DOESN’T it already look like that we will be experiencing extraordinary heat later this year? MOHAMMED IMRAZ JANIF Natabua, Lautoka

I ENJOYED reading Arun Prasad’s adage “be safe then sorry” (FT 24/900). It put me in mind of two others I recently came across: “we’ll burn that bridge when we come to it” and “I wouldn’t trust him with a bargepole”. But my favourite Fiji adage is “a bird in the hand is with two in the bush”. All good fun. MICHAEL SCOTT Morris St, Lautoka

I THOUGHT FRU was grateful for the $2 million, land offer, for the world cup winners. Hope they have secured better deals. DAN URAI Lautoka

AT least as parents we should openly discuss emerging social issues at home with our children rather than attending social or religious activities. Juvenile rape statistics is very alarming and should be a concern to us parents. Please talk to your children if you genuinely love them because no parents teach their children bad behaviour. JIOJI CAKACAKA Tadra- Votualevu, Nadi