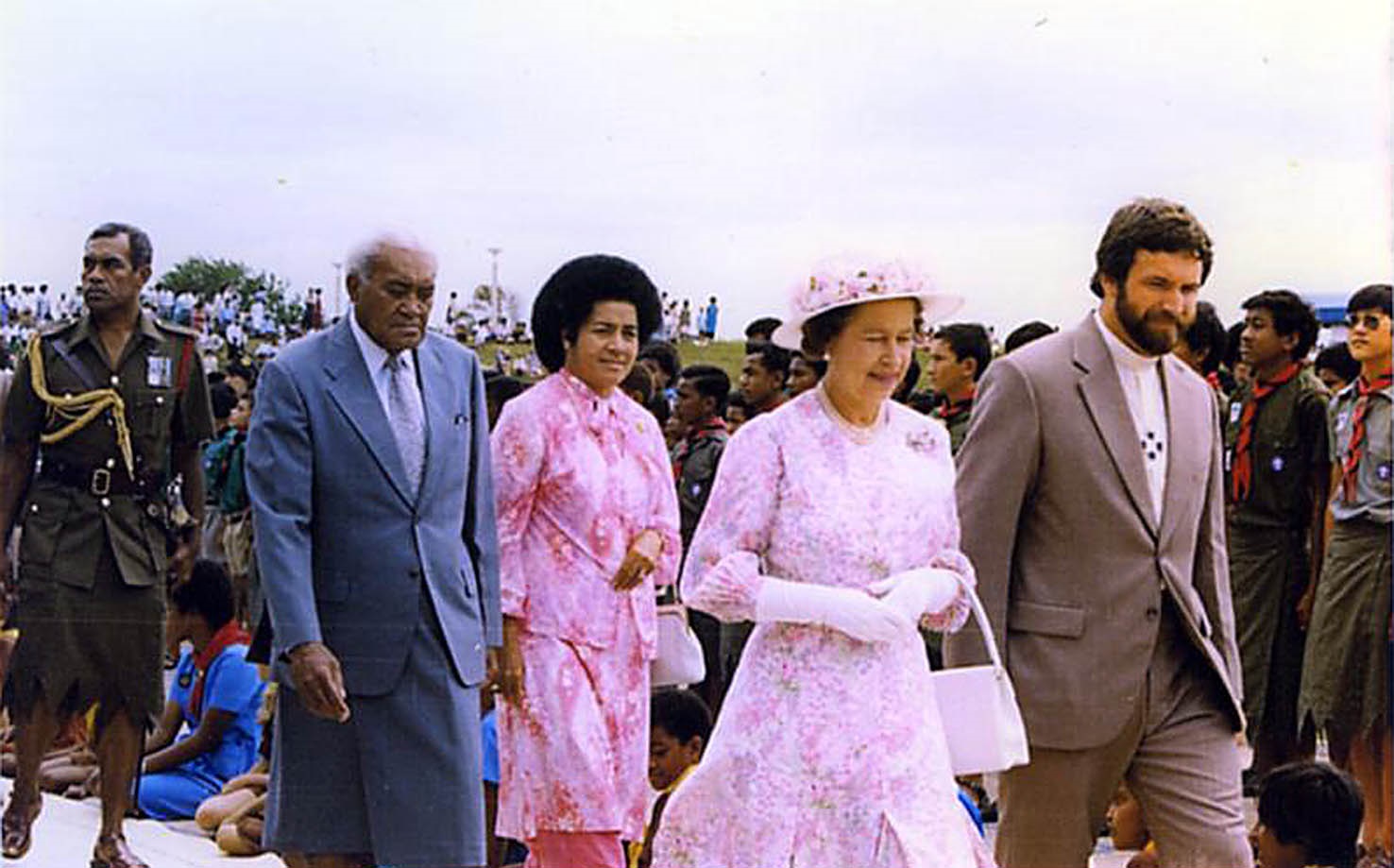 Queen Elizabeth II held a special place in the hearts of Fijians. Since her death, tributes poured in with stories of her ties to Fiji shared in The Fiji Times. Via The Sunday Times, Sofia Kanaimawi recalled the day she met the Queen during Her Majesty’s silver jubilee royal tour of Fiji. The death of Britain’s longest-reigning monarch prompted an outpouring of emotion across Fiji and in Britain. Thousands of people queued for hours, including through the night, to file past her coffin and pay their respects to the 96-year-old Queen for 70 years whose global stature was almost without equal. Her funeral united people from across the globe. Ending 10 days of national mourning, the Queen will be laid to rest at a chapel at her Windsor Castle home alongside her husband Prince Philip, who died last year. There’s no doubt the queen held a unique and timeless position in our lives and she will be missed and remembered by many Fijians here and abroad. She was gentle. She had a humble personality. Isa, rest high beloved Queen Elizabeth II! RAJNESH LINGAM Balgovind Rd, Nadawa

DURING my consistent early morning Sunday walks, it has become standard for me to observe throngs of inebriated youths scrapping near the popular thirsty liquor outlet and the nearby bakery shops. Last Sunday was no exception as there were about 15 young men and women involved in a “bloody” scuffle which then spilled on to the road, creating a panicky situation for both morning walkers and motorists driving by. Such petrifying incidents critically constitute a substantial threat to other joggers who pass by as they occasionally get caught in the crossfire of punches being indiscriminately thrown by brawlers in all directions. Not to mention the profanities being screamed when they miss their intended target. Funny. I usually have to patiently wait for the “free for all” rucus to climax and the drunks to disperse so I can briskly walk across to the shop to purchase freshly baked bread and a copy of the The Fiji Times. Frustratingly, law enforcement authorities are a no show during these peak fight times probably because of the unavailability of fleet. A big disappointment indeed. As a security measure, I now arm myself with a piece of round mould steel bar (1/4 “deformed), in case any of the gang attempts to pounce and start something funny with me. I don’t mind cracking skulls if calculatedly provoked by these wannabe and worthless street hustlers. They seriously need to get a life! NISHANT SINGH Lautoka

THE $591m diamond at centre of scandal (The Sunday Times 17/9 ) is a stark reminder that plunder was an integral part of the colonial project. History has documented that quite comprehensively, especially history retold from the perspective of the victims of colonial plunder. See former UN deputy secretary general Shashi Tharoor’s book The Inglorious Empire: What the British did to India ( 2018 ) for an insight. RAJEND NAIDU Sydney, NSW, Australia

COACH Ben Gollings heaped praises on Votua, Ba lad and our elusive play-maker Waisea Nacuqu with these beautiful lines, “He is one of the best 7s players I have ever seen. What he can do on the field is unreal and he has proved that not just during the RWC 7s, but throughout the year. He is a bit of an unsung hero and he deservedly held the captain’s armband and lifted the Melrose Cup for the team and also for the entire nation”. I agree with Gollings. I penned a piece on Nacuqu after Fiji won its second Olympics gold medal and I was impressed with his sports CV. He left school at a tender age, but did not let that ruin his career as he invested his time and energy in rugby and this paid dividend. He has been impressive since joining the 7s team in 2013 and scoring a memorable run-away try against South Africa in the final of the 2013 Dubai 7s tournament which Fiji won 29-17. Nacuqu never looked back from that glorious win and was part of Ben Ryan and Gareth Baber’s successful reign. He has an Olympics gold medal and one from the RWC 7s. He is normally shy, but does his talking on the field – a small man with the heart of a lion. Nacuqu’s success has not come easy and it has taken guts, passion and dedication! RAJNESH LINGAM Balgovind Rd, Nadawa

WORLD Water Monitoring Day is observed on September 18. Have you given much thought to the quality of water around you? Perhaps not, but thousands of others throughout the world have. Water Monitoring Day was established, to encourage and educate people on how to monitor the components of the water in their local area. This important annual outreach invites citizens throughout the world to monitor the quality of local streams, rivers, lakes, ponds and other water resources. Not all types of water found are in consumable positions so water treatments are done to ensure that it is safe to drink. The most serious problem is pollution and learning how to identify, take care of, and prevent it is more important with every passing year. Even our local government is urging for water tanks to be place at home to harvest rain. There are many lands on the Earth which don’t provide much fresh water for people, plants’ and animals’ needs. Water is an absolute essential of human life, and every form of life that we know of requires it to exist. Fiji is known for its “Fiji Water” which is in a purest form from our natural resources. Water is a valuable product and one which we tend to take for granted up until supplies run short. Water Monitoring Day advertises thoughtful usage of water, so as to keep resources and ensure that water is offered where and when it’s needed. Water is also a universal solvent, collecting all the elements of its environment, and from there carrying it directly into our homes and bodies It also promotes recognition of what’s really in our water from beneficial nutrients and minerals to damaging chemicals. Why not take this day to know what you’re taking in? NEELZ SINGH Nelson New Zealand

SANDILE Ngcobo and Philip Snyman will take the Blitzboks into the 2022/23 season following the end of Neil Powell coaching era. Ngcobo heads up the South Africa Rugby 7s Academy and assisted Paul Delport with the Springbok Women’s at the Commonwealth Games and RWC 7s. Snyman, who guided Germany to their first RWC 7s qualification, will assist him. Both coaches bring years of experience as players and were part of the squad that won consecutive HSBC WRSS titles in 2017 and 2018. Snyman captained the Boks. While we welcome the duo, Neil Powell will be missed. He did wonders for the green machine. RAJNESH LINGAM Balgovind Rd, Nadawa, Nasinu

What do you say

A TOTAL of $53 million has now been paid out in the last two weeks. I wonder what Biman Prasad has to say about this. JAN NISSAR NSW Australia

CONGRATULATIONS to the Fiji tennis reps for your achievment at the Pacific Oceania Junior Championships. Especially the U12 Boys for being the silver medalists and U12 girls coming fourth, out of 11 nations. Hearty appreciation to head coach Andrew and his team for guiding the players to a successful outing. Toso Viti. MANOJ LAL PATEL Drasa Ave, Lautoka

THE ambassador of Israel offers to assist (FT/18/9). Will the government of Fiji reciprocate? DAN URAI Lautoka

POPE Francis will not attend the Queen’s funeral ( Yahoo News 17/8), but Frank Bainimarama will. The Fijian people should feel very proud that despite his busy work schedule their PM is making a special effort to go and pay respect to the Queen on their behalf. RAJEND NAIDU Sydney, NSW, Australia