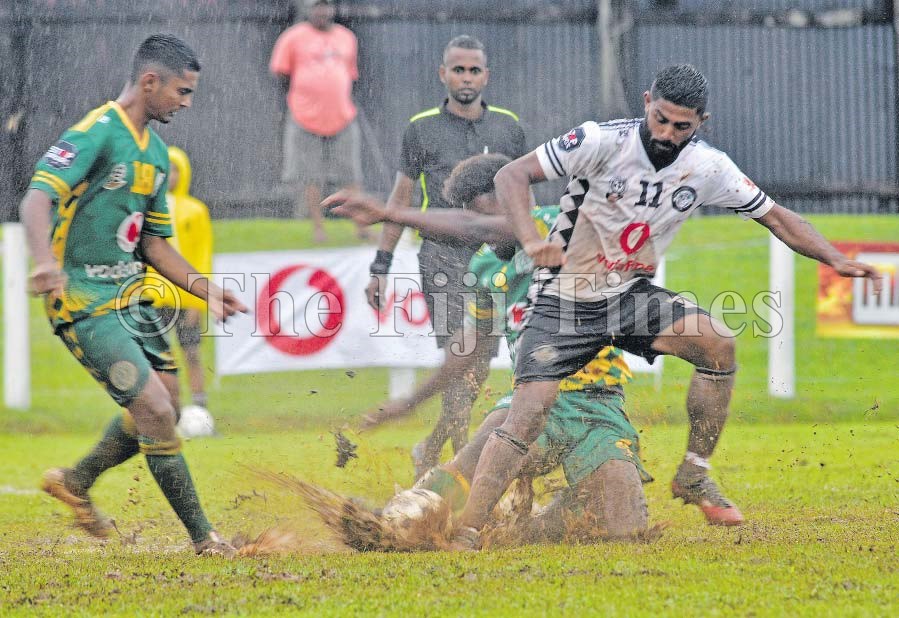 Suva captain Ravinesh Singh (right) tussles for possession against a Nadi player in atrocious ground conditions during the Vodafone Fiji FACT at the Subrail Park in Labasa. Picture: SOPHIE RALULU

AS a football fan I was disgusted watching the Fiji FACT live on television.

Fiji FA needs to take all the criticism for such a catastrophic decision to play football on a rice field.

Under FIFA laws Fiji FA can be charged and fined by OFC.

Fiji FA risked players health and safety by organising and giving the green light to play matches at Subrail Park in Labasa.

Plenty players are on the injury list because of this catastrophic event.

Money making and greed shown by Fiji FA is paramount.

Where is the Health Ministry now?

What if a dog infected by leptospirosis freshened itself on the field and the players do get cuts on a muddy turf.

Shame on you Fiji FA for allowing football players play on a rice field.

He stated the pitch was playable.

Grow up Fiji FA, football has improved in Fiji via Marika Rodu, Kamal Swamy and Babs Khan and many other coaches.

While the style of football has improved in Fiji, money hungry Fiji FA will do anything to harm footballers.

One last thing, you need VAR in Fiji Football because Fiji FA has biased and blind referees.

Rewa could have gotten a penalty when Patrick Mishra was elbowed at in the box by a Nadi player.

You can watch the replay again.

IT has been a while since I have put pen paper in the only newspaper on record.

I am compelled to write again about soccer in Fiji after a hiatus, which frankly seems like the script of the movie Groundhog Day.

Soccer, as the Americans call it, or football is sometimes referred to as poetry in motion.

Style in soccer, as in prose, is less the product of personal expression than of poise, discipline, patience, and infinite care.

Just as a canvas is important to bring a prose to life, so is a pitch for soccer.

For the football poetry to remain in motion it’s imperative that the ball reacts to the surface with least of impediments.

Needless to say that a safer playing surface reduces the risk of injuries to those playing it.

Therefore, it’s is unconscionable that the governing body in Fiji that has been running this farce since 1938 hasn’t learned the basic requirements of a proper soccer field.

They apparently also haven’t figured out the weather patterns in Fiji.

The Fiji FACT in Labasa epitomises the incompetence and hubris of Fiji FA.

Unfortunately the players and patrons continue to be plantation slaves for these unscrupulous masters.

Perfect before the rain

ACCORDING to the Fiji Football Association president the ground condition on Saturday morning before the rain came was in perfect condition.

FIJI Football Association shame on you!

If you knew the ground was not in good condition then why did you allow games to be played.

This is an eye-opener for Fiji FA.

Next time put a roof tin to cover both ends of the stadium for the safety of the players and also the public.

SO now the age old Fijian kerekere system of mutual assistance, community support and reciprocal relations is, we are led to believe, not acceptable and needs to be “completely eradicated” ( FT 28/11 ).

At the same time it is quite acceptable for all Fijians to make political donations.

There apparently is no problem with the political donation soliciting syndrome in the country.

So spontaneously helping one another in the local community is not on, but helping the political elites to stay in power is perfectly OK.

That is a sad reflection of our evolving value system.

WHILE in Vanua Levu, I visited two heritage places and I was really disturbed.

The floating island and the hot springs in Savusavu need to be taken care of.

The site at floating island has no sign boards to indicate to visitors where the island is located.

Anyway, when I finally reached the floating island I was greeted by household rubbish and bushes and I really don’t want to mention anything about the road conditions.

I request the landowners, who built a small shelter near the area, to please clear the rubbish and cut the grass in that area.

It can generate a lot of income and tourists would just love to come and visit the floating island again.

At Savusavu hot spring, I am told that the rubbish was not cleaned because of some festival next to the hot spring site.

Please Savusavu Town Council, clean up the mess and restore the great atmosphere Savusavu was known for.

The Local Government Ministry appointed special administration team needs to get its act together and get the heritage site and the ground cleaned up quickly.

If it’s not cleaned up soon I might call my mates, Allen Lockington, Nigel Fiu, Manoj Patel and Wise Muavono from Lautoka to help .

Sports a way to beat NCDs

SO good to see the various games being played around the country.

Unfortunately we can’t control the weather and the games in Labasa could have been called water polo or a mud wrestle.

Anyway, we have rugby, soccer, volleyball, golf and other sports.

Then I read (ST 29/11) about the UN Sports Day that staff members took part in at Bidesi Ground.

Isn’t that just too good.

They had sport and wowza – coconut husking and scraping competition!

Now that’s the way to organise a family day, including things that we do at home.

I wanted to suggest a closing and dishwashing competition, but that would be a bit too much nah.

In the past we had the Qionibaravi sports day and PSC Day that I can think of, but those sports must be revived to a level where people go and compete especially with NCDs being a factor today.

Thank you to all the organisers — I salute you.

LYNDA Tabuya said she didn’t go for leadership in 2018 and now as well.

So did someone else recommend her deputy leader’s application or it just pops out from nowhere.

A true leader should not boast about figures which she is doing against Mr Gavoka.

ALL I can say from reports of the SODELPA AGM is that we all are seeing a lot of democracy in action, and it is evidently alive and well in that party.

One other observation I make is that the snake has reared its ugly head and we all have been warned about never trusting a snake.

NOW that the above is done and dusted.

I am not quite sure of the dusted part.

Did our much publicised and revised constitution come back to haunt us as reflected on the news after the election.

Maybe the dust can be mixed with some adhesive based compound to fill in the cracks so it’s more done and sealed rather than dusted.

IN 1987 the whole army followed him, but in 2020 the guys who went into parliament through his leadership have rejected him.

For the new SODELPA leader Viliame Gavoka to say that the party still needs him is like rubbing salt into Rabuka’s wounds.

WE having our homegrown Trump followers and Biden followers clashing within an existing party.

Let them stab themselves, election is near.

I REFER to the article in The Fiji Times (28/11) where Fiji Muslim League says to follow proper channels to seek halal certification.

That is quite true because there are a few dealers who try to cheat people with their products by falsifying it as halal.

Just one clarification I would appreciate it if they can tell us if the companies have to pay any money to get it halal certified.

Also, if they do pay, where is that money used for.

WHOEVER was the commentator for the matches between Ba-Nasinu and again Lautoka-Nadi in this year’s Fiji FACT must have forgotten that we are watching it live on TV.

In the last 10 minutes of Lautoka-Nadi match, he commented nearly 10 times that it’s raining heavily.

Mate, we can see that.

To Fiji One, please bring someone credible.

The present ones are just not good enough.

THE SODELPA election for party leader and deputy leader surprised many ( FT 28/11 ).

Sitiveni Rabuka and Lynda Tabuya, the peoples’ popular choices (as per their voter numbers in the 2018 elections), were left behind.

It drives home the truth about traditional or vanua politics, that it is deadly.

If so, Rabuka should be treated like a king and not the helper.

Being a SODELPA fan, I am disappointed that SODELPA missed the opportunity to show that they champion women’s rights and gender equality in Parliament, had they given Lynda Tabuya a place at the table.

Isa, it is the patriarchal society all over again.

When will we the iTaukei decide to walk the walk and not just talk?

FIJI has a number of very invasive foreign-derived flora and fauna species that can be or are already becoming a problem if they are not properly managed, controlled or even totally eradicated.

Two currently topical ones are: • the invasive American iguana; and • the subterranean termites.

Biosecurity Fiji is currently doing a tremendous job, but I just feel that our overall formal reaction strategies have been way too late and not really concerted or even enough.

“The horses had already bolted from the stables” long ago and now have so many offsprings to make complete eradication impossible.

All we can hope for now are proper management and control strategies to ensure that the spread of current clusters are contained and that the adult species are destroyed.

Eradication should also be more targeted at the nests and the eggs so as to reduce further population growth.

Everyone should come on board and the authorities concerned should have incentives in place to encourage everyone’s participation in these programs.

I note that SPREP — the Pacific regional environment organisation — since 2017, has in place a Pacific Invasive Species Battler of the Year Award.

This year’s winner was a Niuean for his overall efforts in helping eradicate invasive wild pigs and weeds in Niue.

Previous annual winners were from other Pacific Islands, no one yet from Fiji.

Perhaps, there are those among — individuals and groups — who are working tirelessly and quietly to rid us of these unwanted pests.

Nomination of a Fijian(s) for next year’s award may just garner the required interest and incentive for a more proactive and targeted eradication and management program and in doing so win the award.

It can therefore be a win-win situation for all concerned.