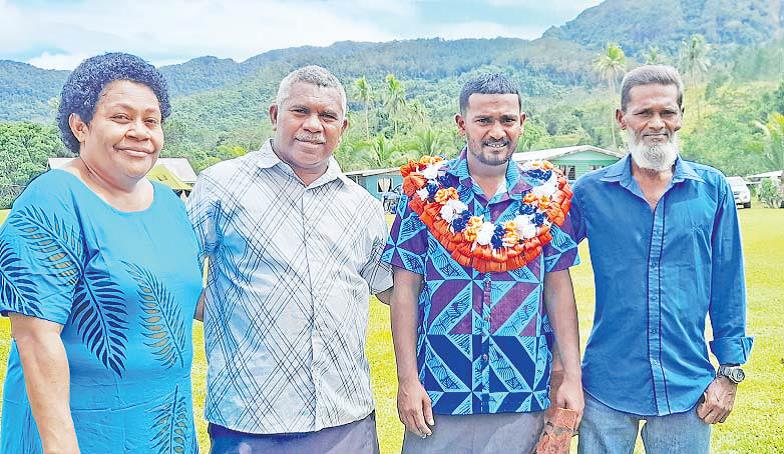 DID the parents of the children switched at birth 27 years ago at Labasa ever got compensated for the error which must have caused so much pain to the mothers of both the children.

I WISH to congratulate the Marama Taukei Naua, Adi Tema Varo, of Saunaka, Nadi for being appointed as the new president of the wealthy FijiFirst party.

I am just curious to know whether our good PM and FF founder has altered his bearing or behaviour towards the Fijian chiefs these days.

I vividly recall at one time he coarsely advised the respected chiefs to sit under a mango tree and drink homebrew.

I assume he must have made that harsh announcement under immense pressure and resentment.

IF I may add my two pence worth to the ensuing debate over the qualification requirement for teachers.

In my opinion a higher academic qualification does not make one a better teacher.

Nor does a more experienced one with a lesser qualification.

Both can produce the results using innovative and creative methods of teaching better than the other.

In other words, both can be equally good or bad.

However, what makes the difference is the passion and love for not only teaching, but moulding and inspiring the students.

DOING a little bit of math, it seems the annual salary figures earned by teachers quoted by the Ministry of Education permanent secretary Anjeela Jokhan (FT 21/21) are misleading.

The salaries quoted which teachers receive now include the cumulative percentage increase rather than the salary rise from just the last increase in 2017.

This subsequently gives an impression the pay rise was substantial.

Quoting an example a head of department salary was $24,000 per annum (P/A) without stating the year.

The first amount must therefore be for the pay rise in 2014.

Playing around with figures to give an impression teachers are receiving large percentage salary increases in this way does little for the credibility of the Ministry of Education.

THE newspaper article titled “China tightens relation” in Fiji and the Pacific (FT 20/11) caught my attention.

Five months earlier in May I raised a similar issue in this column regarding China’s increasing handouts to the Pacific region.

In Fiji’s most recent case we are now given sporting equipment and wheelchairs.

However, one must not lose sight of the fact that to every action there is a reaction.

And no doubt in the future, the Pacific nation governments must reciprocate these donations.

The governments of most Pacific Island states now have close, warm ties with Beijing.

On the hand the ordinary citizens — for Fiji at least — the preference is for the countries they know — USA, Australia, New Zealand, India, Europe.

Very few choose China as their first choice travel destination — except our government officials, those with family ties in China and the occasional businessman.

Let’s hope the government does these: is listening to its citizens; doesn’t lose touch with its traditional friends; and keeps the country’s soul intact.

It goes out to show that we can live peacefully and happily in a multiracial country like Fiji if we embrace each other and show tolerance to each other’s culture.

Having seen her son, Filimone, start a new chapter in life as a married man was like completing and winning a tough yet rewarding battle.

Sofia Maleti has been hailed for her motherly love and care, and her presence has glorified her son’s life and nurtured him into a hardworking man.

Her son attributed his success to his parents who have been his pillar of strength.

Such love and bonding between a child and his parents lay the platform for children and their parents.

I HAVE followed with interest the visit by Australian Senator Zed Seselja to Fiji last week.

He apparently took the first flight on November 11 after Fiji opened its borders to returning citizens and residents, and Fiji Airways began flying from Australian ports.

While it seemed intriguing that a right wing Senator (many of whom are climate sceptics) is dispatched to Fiji even before the Glasgow pact was adopted at COP26 — a meeting that saw Australia come under intense criticism for its well-known laggardness on climate change.

Even as a member of the Pacific Islands Forum, it seems Australia displayed such blatant disregard to the plight of the Pacific small islands, some of which are facing existential threats.

The chance for Australia to demonstrate it was part of the Pacific family, as they claim, has gone begging and the big brother has failed to show any willingness to be part of the range of initiatives such as stronger commitments by 2030, reduction in methane, aligning to 1.5C temperature goal, phase down of coal and subsidies to fossil fuel industries, greater contribution to financial institutions such as GCF or for initiatives such as “loss and damage”, that was agreed by many developed countries in Glasgow.

If anything, the rhetoric and stubbornness with which Australian ministers basically dismissed the “wins” at Glasgow, underscored the blatant disregard of the Australian government to the plight of vulnerable nations and people of the Pacific.

So what was the point of Seselja’s visit?

All I read in The Fiji Times was the minister engaging in discussions on sport, but mainly drinking kava and making comments on how Australian trade in kava will help Fiji’s economy etc etc.

I have not seen any comment by him on Australia’s stance on climate change?

Did he hold any press conferences or speak at a public lecture where journalists and citizens could ask him some pertinent questions?

And I can assure him a lot would have been on Australia’s record on climate change generally and its performance in Glasgow.

And did Fiji Government question him directly on some of the issues Fiji was apparently championing at COP26.

Ironically this enhanced trade in kava has been on the books for the last 3 years, and there is still no required legislation in Australia to allow kava imports, not even for traditional purposes.

Tonga and Vanuatu apparently have arrangements in place for the export of their kava to Australia.

So I honestly do not see how Seselja could have kept a straight face just ranting about the huge scope and income for our kava business.

I suspect the minister was quietly dispatched to smooth any fall outs from Australia’s recent record at Glasgow and use some of aid money to soften Fiji’s, and maybe other PICs, strong views on Australia in the climate change space.

Given the lack of any detailed commentaries in the media or views expressed by the Government, civil society and others, it seems Seselja might have succeeded in quietening the voices, through this kava diplomacy.

YOU know you are in the presence of a creative when you get to read “fortunately, we were quite wrong (about the likelihood of an early anti-COVID-19 vaccine), almost as wrong as that fellow what’s his name —ah yes, Trump, who thought he was president for far longer than most of us did.

Anyway, he believed a lot of dopey things about the COVID-19 virus and how to run a country” (From The Crowd by The Sunday Times columnist Seona Smiles 21/11).

It brought a huge smile on my ugly mug on a wet and miserable Sydney Sunday morning.

POLITICS is a “serious” encounter with numbers.

Whatever the result, take it on the chin and move on.

That is democracy at its best.

FROM the turf state and the immediate surroundings, it didn’t appear that the organisers of the Fiji and Georgia rugby Test gave much prominence to the match.

THANK you to Sukha Singh for finding my letters interesting.

I do my best to put my thoughts clearly.

They are not designed to please people.

In fact, they are designed to encourage debate and discussion.

I am not the type who “sucks up” to anyone and neither am I pretentious.

My letters are only for the switched on, progressive and intelligent minds.

So obviously the Mickey Mice and the grog dopes would find my thoughts challenging.

What would be even more interesting is if the editor printed more of my letters.

However, I do understand that he must find a balance.

WATFORD inflicted added misery and pain in the Manchester United camp and pressure is mounting on lethargic manager Ole Gunner as the Red Devils were thrashed 4-1. Manchester United fans have made their call — “Sack Ole”.

With many highly paid players, United’s performance is in shambles thanks to Ole!

WITH the resignation rate of holders of high offices currently prevalent in the country, perhaps Fiji will soon be known as the “Land of resignations”.

WAS this the same team which played Spain and Wales?