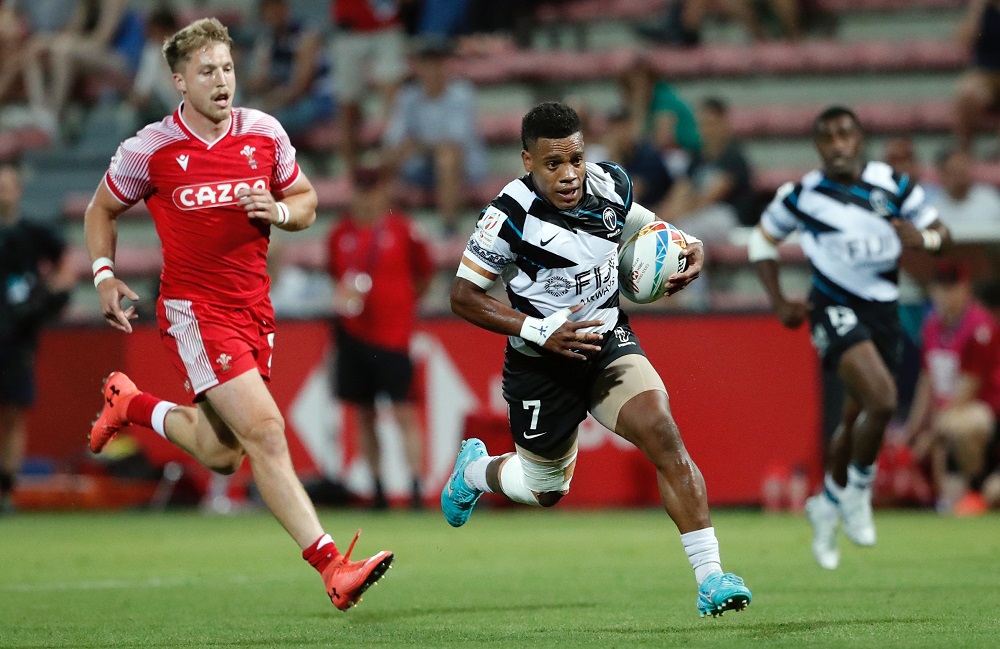 NAPOLIONI Bolaca’s return to 7s was at its best ever time as our nippy play-maker played his heart out in the national 7s jumper and made the crucial tackle that saved a sure shot USA try in injury time. The try-saving tackle by the Tokyo Olympic gold-medalist helped Fiji clinch a narrow 19-17 win over USA in a pulsating Toulouse 7s quarter-final clash. Fiji was 12-0 down, but Coach Ben Gollings inspired the boys to score three tries and take the lead. The Eagles had an opportunity to close the game, but Bolaca with all his 7s experience made the crucial tackle and sent Fiji into the semis. Bolaca’s return was timely and will put pressure on those in the backline as Ben aims to choose the best players for this year’s RWC and Commonwealth 7s tournaments. Apart from Bolaca, Kunatani and Sevu featured prominently. RAJNESH ISHWAR LINGAM Balgovind Rd, Nadawa, Nasinu

FIJI was very fortunate to enjoy an excellent, generous and extremely close relationship with outgoing Australia PM Scott Morrison. Many issues were generously addressed most amicably. Congratulations must be in order for incumbent Australia PM Anthony Albanese. Enormous thanks must go to Scott Morrison for all he did for small Pacific island brother, Fiji. His prime ministerial exit heralds the end of enormously generous perks Fiji enjoyed over recent years. Nadi’s Black Rock Military Base Camp is one huge monument and legacy. among others. Hundreds of Fijians today enjoy seasonal work in Australia. Fiji’s kava industry must be tremendously grateful for several doors opened to assist our farmers and exporters in a big way. We pray we find and enjoy continuity with the new Albanese government. Initial post election reactions show a peaceful transition of power appears in the Australian horizon. Morrison is man enough and humble to acknowledge defeat. This is a true sign of good leadership and maturity. Fiji awaits our very own 2022 General Election. Should the tables turn on the Bainimarama-Sayed-Khaiyum led FijiFirst Government, I hope and pray all Fijians also get to also enjoy a peaceful and equally respectful transition of power too. Political power is never permanent. Enjoy the trust while it is given. Defeats are never ever easy to accept. Losers must always remain humble and move on. That’s true democracy. No more selfish and unnecessary coups, please. The nightmares of 1987, 2000 and 2006 poltical upheavels must not rear their ugly and unpalatable heads again. Fiji deserves far better. RONNIE CHANG Martintar, Nadi

Tough for the opposition

SENI Nabou, the general secretary of the National Federation Party gave her views in The Fiji Times (Opinion column 21/05). After reading her comprehensive article on party manifesto, it becomes obvious that during the past six months or so the current Government tried every bit to make this election difficult for the opposition parties. Imposing heavy penalties is just another technique to scare the opposition. My simple suggestion would be to skip putting your money and time on printing manifestos and go on your strong campaign program. Just let the public know about the manifesto issue and that no one is prepared to face the $50,000 fine, prison term and eventually get disqualified from the election race. This is just another trap designed for the opposition parties. VIJAY MAHARAJ, Sydney, NSW, Australia.

THE PM acknowledges that his party has been in political power for the past 15 years (FT/22/5). Appropriate time to explain to the people why they stopped town council elections and why they have not mitigated the high cost of living despite their ten years of economic boom. DAN URAI Lautoka

IT is indeed a wonderful feeling to realise that we still have leaders of certain organisations who hold democracy and accountability so close to their hearts. Thank you Shamima for being there and showing, especially the younger generation, how powerful democracy and accountability really is. Please remain outside of Parliament because you’re doing a fine and remarkable job out there. We need people like you to hold leaders accountable to their actions and leadership styles. Clearly you have made it clear that you are not interested in political party tickets and that you are one that don’t tell lies. We need people like you to be the voice of democracy, equality, accountability and transparency from outside the so-called “ring”. Leaders ought to be strong and powerful and also be able to digest and manifest positive criticisms aimed at upholding democracy and transparency. Everyone is bound to make mistakes and no one is exempt from being corrected with no exceptions. We still have our democratic rights enshrined in this constitution and when we have that, we then also have our rights to exercise that as well. That, I believe, is not breaking the law at all. It gives us ordinary citizens hope that our future is intact, bright, promising and life is always going to be good for everyone. A good and powerful government will also thrive upon having an equally good and effective opposition both inside and outside of Parliament whose main focus is ensuring that every action and decision is always held accountable at all times. It will be healthy and prosperous for our beloved country Fiji. ALLAN JESONI Davuilevu

YET another landowning unit in Vuda is claiming that a former tenant transferred his agriculture lease to an investor without their consent (FT 20/5). No surprises there. Many landowning units in Fiji are now coming to terms with how their land was alienated by the unscrupulous hands of a corrupt few. While the PM pointed out that the issue did not reflect well on iTLTB, I believe the blame also sits on the laps of landowners who think that their inheritance is an opportunity lost if they do not use it. The “ball in the ruck — use it or lose it” imperative being used by TLTB to persuade gullible landowners into surrendering their land for leasing purposes is a lie and a blatant disregard of indigenous rights. SAMU RAILOA Nadi

JUST on March 31, 2022 the Taveuni-Suva return fare for a Land Cruiser was $600. On May 22, 2022 new rate $600 one way. I understand this fuel and wages increase, but this change in fares is ridiculous. Can the fares be changed or increased anyhow to any amount? Authorities kindly look into this. MUKESH KUMAR CHOTTU Waiyevo, Taveuni

THE PM says his party is here for all Fijians. I beg to differ. Trade unionists do not have the same right as all Fijians They are barred by their law in contesting national elections unless they resign from their trade union roles and contest while unemployed. DAN URAI Lautoka

MY hearty congratulations to The Fiji Times staff members on their new appointments. However, my special compliments to John Kamea whose The Sunday Times article is a must read for me. It’s very enriching and I will definitely recommend it to school students as part of learning language in schools. PRANIL RAM Votualevu, Nadi

ONE of the major downsides of nepotism is that it impedes a nation’s economic prosperity because of a leader’s incompetency, which I believe has been a common trait of the current Fijian regime. Just look around you Simon (FT 21/05). I know it’s hard to digest, right? NISHANT SINGH Lautoka

CONGRATULATIONS to the Ausralian people for their courage and foresight to change the government. I believe an opportunity has arisen where the trade union movement leadership in Fiji has the opportunity to have direct access with the Australian government through their counterpart the ACTU . DAN URAI Lautoka

YES, MPC is absolutely spot-on (FT 22/05). Rather than availing yourself at prefect induction ceremonies and gracing corporate organisations (known FFP sponsors) here in Lautoka, Aiyaz Sayed-Kaiyum should perhaps take a day out and visit the thousands of deprived and neglected households in the West. Hardworking Lautoka philanthropist Allen Lockington (Unkol) and his faithful sidekick (TD) can drive you around. Perhaps the impulsive Dr Reddy can accompany you as well so that he can demonstrate to the already famished mouths on how to magically “adjust” to the exorbitant cost of living. You can still be dressed to the nines while on this proposed excursion Mr A-G, just make sure to pay the TD his dues. NISHANT SINGH Lautoka