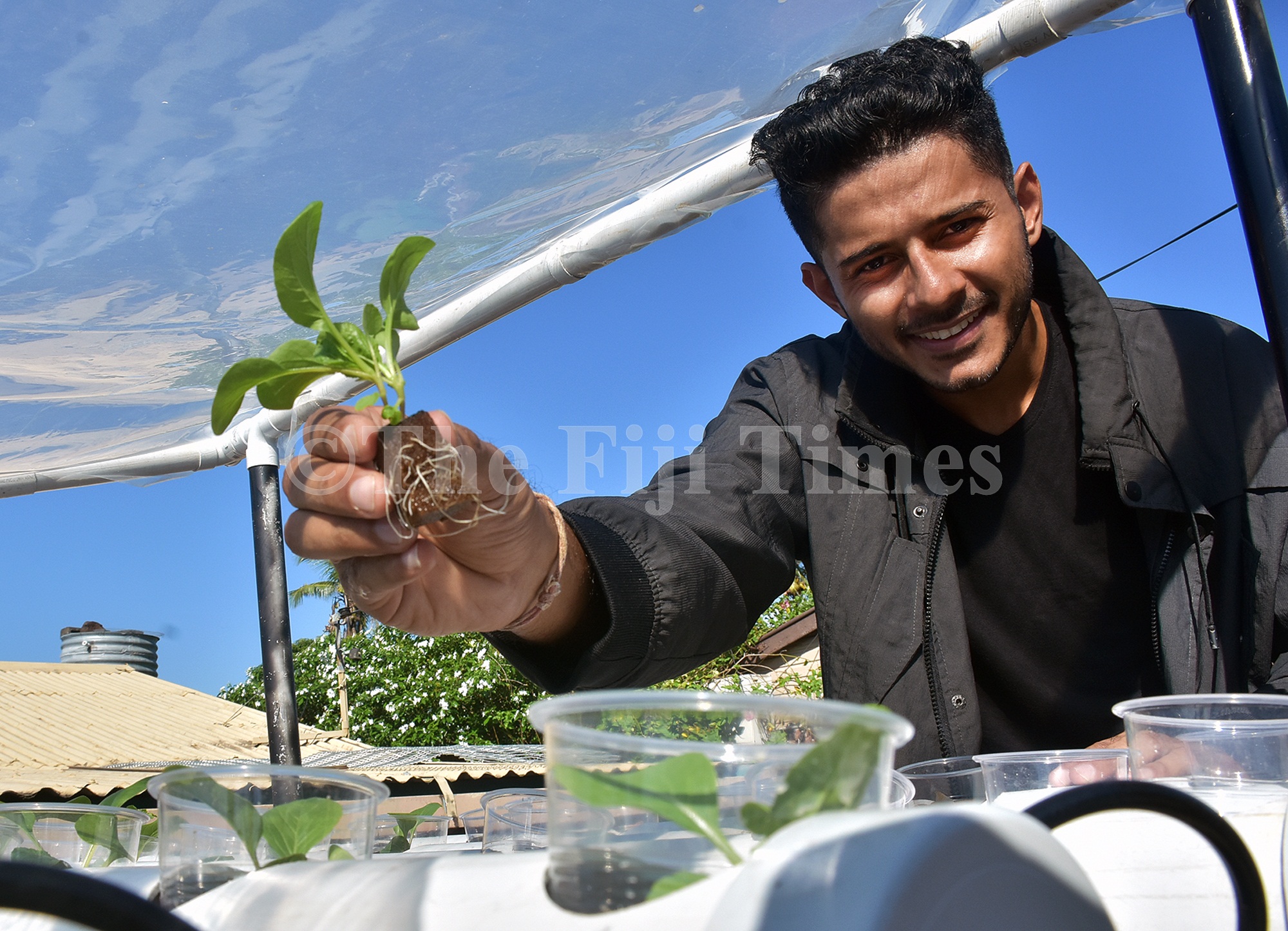 Rinesh Sharma, who hails from the Sugar City and whose story was published in The Sunday Times has done Fiji proud with his ‘Growing Essential Greens Homekit System’.

Through the ‘Growing Essential Greens Homekit System’, Rinesh intends to reach out to the vulnerable families who had been affected by COVID-19.

Hence, his project captured the attention of a global forum — One Young World.

This led to Rinesh being awarded funding from the Bill & Melinda Gates Foundation and United Way to tackle the COVID-19 pandemic.

Rinesh has done wonders and I commend his team for delivering five kits to ensure emergency food needs of the vulnerable families were met while they stayed at home.

Rinesh and the likes of Allen Lockington and Narayan Reddy have put the Sugar City in the front fold as far as charity work is concerned and I thank The Fiji Times for publishing these stories at such critical times.

All the best Rinesh in your bid to expand the production of hydroponic home kits and I’m sure that this method will be devised by others to meet their family needs!

Politicians and the media are very fond of quoting endless statistics regarding Covid-19.

We hear them every day on the TV. Let me quote a few of my own.

However, a bus may have around 30 sq mts of available seating; 50 passengers get half a square metre each.

Can someone explain the logic of the continuing ban on open-air, non-contact sports while no-one seems to mind people being crammed into buses everyday like sardines in a tin?

I had witnessed a bus packed with people and myself like sardines on what was supposed to be a joyful Saturday bus ride to the village.

It is unhygienic and not safe.

The idea here is to economise but people are the victims of the management’s strategic plan.

I plead with authorities to check this out please.

Justice Gounder went on to say that police officers must be treated seriously as they stroked at the very heart of law enforcement and public safety.

The same can be said of police officers also where it’s becoming more prevalent as well in our communities of reports of officers allegedly abusing the authority awarded to them and allegedly assaulting the public.

I believe police officers must show total respect for their work and particularly in how they treat people.

What do you expect when some of the very people who are trained and authorised to uphold the law allegedly break it themselves?

Be an example of the proper way in which we need to be dealing with each other!

It was good that Australia has provided what the High Commissioner said was “budget support” to the Fijian Government.

I was a bit surprised that in the same breath, the Minister for Economy read out the pre-allocations for this figure.

My understanding of budget support by a donor, and many partners like the EU have begun to use this modality, is that the money goes directly into government coffers.

While some of the allocations, eg support to Ministry of Health, is imperative during this current crisis, I would like to question the basis of how the cake is being divided in the usual “top-down” fashion.

I must agree with honourable Biman Prasad that the bulk of the money should be given to the poor, the less endowed, the people who have no source of income now, as cash grants to enable them to cover the basic necessities of life.

We read in The Sunday Times that 80 per cent of the people seeking help wanted support to buy food.

Well, who can argue with this fundamental need and the cash they can use to purchase the essentials to enable them to survive.

The revelation by the secretary-general to Parliament, Viniana Namosimalua, that some politicians from both sides of the House are under scrutiny for alleged breaches of travel and allowance claims (FT 16/05) is not only a very serious issue but we the public need to know who these parliamentarians are.

The matter is currently under investigation by the Fiji Independent Commission Against Corruption (FICAC) and its findings must be made public.

We look forward to the outcome of the investigation by FICAC.

Isn’t it time a review was done on the laws against marijuana? Why?

Men and women’s lives are at stake. People are going to jail every day based on laws that lack evidence to justify harsh jail sentences.

Canada has legalised both medical and recreational marijuana.

This suggests that the classification of marijuana in Fiji is wrong.

The growing body of evidence showing medical benefits of marijuana can be found with a simple Google search.

The damage to society is not worse than alcohol and tobacco, but the punishment far outweighs the crime.

If the lives of people who are sent to jail are worth anything, we must talk about this. The law against marijuana is unjustified.

The issue is at least worth robust debate.

My wife and I just want to thank God for keeping us alive and well, through hard times and through days of ease, through sickness and in health, through times of plenty and times of poverty, through days together and days apart.

Today as we look back, from that Saturday, May 17, 1980, at our small home church in Service St, Suva, until today, 40 years down the marriage lane, we just give God the Father, Son and the Holy Spirit all the thanks, praise and glory!

We thank all our family members and friends both here in Fiji and abroad for their contribution in anyway during the past 40 years to keep our marriage vibrant and afloat all the time.

We would also like to apologise to all our family members and friends both here and abroad if any of our words or actions hurt your feelings in anyway.

Please forgive us. Looking back, with all my weakness and shortfalls, I can confess with all confidence that without God and Christ in my life; our marriage would not have survived this far.

To all young people contemplating marriage or to married couples whose marriage is on the rocks right now, shaky and about to fall apart – try Jesus, He never fails!

He conducted and blessed the first marriage.

The one flesh in marriage should be Man + Woman + Jesus = ONE!

We have been very lucky as a country that we have controlled the coronavirus without any deaths and the credit goes to our Government, the doctors and nurses, the military and the police, and of all the people of the country.

With the collective effort of everyone, we have only three cases left and very soon we should be a ‘free’ country. But there is a danger from the cousin of corona which is known as ‘kawasaki’, which affects children and this can be very dangerous too.

Let’s not become complacent and every effort should be taken to avoid the introduction of this disease.

Internet providers have anytime and off-peak data as part of their data plans.

I believe the off-peak data are wasted data because it is accessible only after 1am.

Can the lack of funds or I would say bad management of municipal councils be blamed for unaudited accounts and the appointment of CEOs and special administrators instead of mayors and councillors?

I believe the councils never had this problem before.

By the way, what happened to the municipal council reforms. I hope it can be done in honourable Premilla Kumar’s term as minister or will it be another blame game. JOHN BROWN, Drasa Vitongo, Lautoka

I believe the fight against COVID-19 is an opportunity for our Government to promote a green economic recovery.

Rebuilding stricken economies could also mean mitigating the effects of climate change by moving away from our reliance on fossil fuels and becoming carbon neutral.

More than a century ago, the gullible girmitiya navigated into uncharted territory.

Under the vigilant eyes of the intolerant British, these labourers progressively moulded Fiji into economic prosperity as evident today, thus earning global admiration.

I wonder what state our little coup-riddled nation would have been in had these indentured farmers not set foot in Fiji in the first place.

It could be anyone’s guess.

FRU chief executive officer John O’Connor has confirmed that the Test matches that were supposed to be played against the Wallabies, Ikale Tahi and Samoa have been deferred until at least October.

COVID-19 has drastically affected sports on which many rugby players depend on to meet their daily needs.