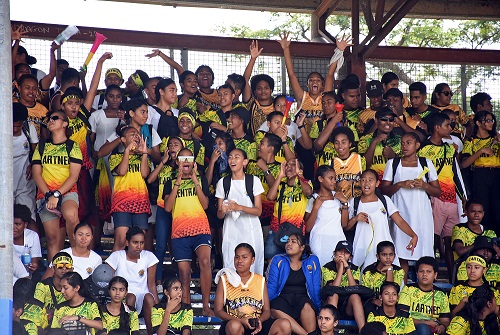 Despite the setbacks and the ever-growing challenges, I’m fascinated by how different teams manoeuvre through the season to prepare well.

Congratulations to team Natabua for defending the boys’ title and team Jasper for winning the girls’ division yet again not forgetting the rest of the nine competing schools for a commendable effort.

As an old boy, I’m super proud of the girls from Natabua for an impressive performance and I believe they are in the right direction in returning to their former glory days.

However, as the dust settles over Churchil Park last Saturday, we could feel the usual Western spirit looming as the focus shifts to the big one.

I AGREE with sports reporter Zanzeer Singh (ST 19/06) that Natabua and Jasper will pose a threat when the Fiji Finals take place in Suva.

The Western zone concluded and Jasper and Natabua stood out.

Nadogo Central College will get a strong contingent from the North.

Competition has been solid and schools have been preparing well.

I had a chat with Jitesh Patel and Rajeshwar Prasad, who were beaming with excitement with MGM’s success, and confident of a good outing in the Fiji Finals.

In the dark and stillness of a peaceful Sunday morning, the shrilly sounds of police sirens shattered the silence in our then quiet neighbourhood.

I understand our hardworking policemen and policewomen try hard to get intoxicated bar-tavern patrons off our section of Martintar, Queens Rd just before the break of dawn.

I understand our bars and taverns are supposed to close at 1am.

Is there any monitoring of bar and tavern operating hours?

Or is there some laxity in policing?

I seek some understanding and tolerance.

Are shrilly police sirens really necessary to chase drunkards off our streets just before sunrise?

I mean no offence.

Just trying to be heard and understood.

More often than normal, the intoxicated patrons have impaired reasoning.

They have very little control of their actions.

This aggravates our poverty levels and exacerbates domestic financial stresses.

FOR democracy to be seen and felt at its highest level in Parliament sittings, all parties inclusive of Government should be in a position to accept a barrage of opposing views and explosive debates and criticisms aimed at better utilisation of Government resources and supplies.

Parliament should never be in a state where it only entertains a one-sided deliberations that lack political restraint and quality control.

Parliament should never be a voice of only a few selected honourable members, but instead it should be a place where concrete and collective and inclusive debates are seriously taken into account by both the ruling party and the opposition as well.

It must never be ignored that the opposition is in Parliament through a significant number of votes and is the current representative of almost 50 per cent of those that voted in the previous elections.

The current ruling FijiFirst Government is the voice of just over 50 per cent of those who voted in the last elections.

Therefore a collective and inclusive collaboration is needed in order to deliver the required services to its voters.

Therefore in our current scenario in Parliament the opposition must be respected and given ample time to contribute towards a certain Bill or other issues raised in haste.

That is true parliamentary democracy where the principles of transparency and accountability is allowed to blossom into perfect resolutions.

A courageous, clean and well-positioned government will undoubtedly welcome positive criticisms and allow for immense contributions for both urban and rural developments.

Therefore good leadership thrives on listening to opposing views and then turning them into opportunities to make informed, prudent and balanced decisions.

I only wish that such a system of governance was in place for our beautiful nation.

Unfortunately, it is not.

We must contribute towards bringing back true democracy in our nation.

Everyone must be given the respect deserved.

The Opposition must be respected.

A SALUTE to recycling advocate Amitesh Deo for all the efforts over the many years in the recycling space.

I was also very happy to hear about the workshop for the women informal waste pickers (FT 15/06).

No jab no entry

TO the organisers of the 14th Fiji Bitter Savusavu 7s rugby tournament, allow me to sincerely congratulate you.

Thank you for this highest exemplary benchmark to keep Savusavu free from the wraths of COVID-19.

Thank you for being pacesetters.

AN advertisement in the sports pages of The Fiji Times (19/06) revealed the implementation of a no jab no entry policy at a particular sevens tournament on Vanua Levu.

However, no such policy was in place for the Drua and Chiefs match in Lautoka a couple of weeks ago.

Talk about funny sources of information for decision-making purposes.

And haven’t we been struggling in this department for quite a long time.

WHY hasn’t the electricity charges gone up.

Is it because the elections are coming up?

Anyway is there any party who can instruct Fiji Sugar Corporation to continue producing electricity throughout the year.

IMAGINE a Fiji without social problems.

Women and children are murdered at the hands of perpetrators.

It seems only a miracle can only stop a bloodshed.

Do you believe in miracles?

WHY can’t the Fiji Roads Authority install traffic lights at all junctions along Grantham Rd to professionally manage traffic flow?

Why the referrals from one department to next?

I READ a story in a social media about a woman who called another woman for an item she is wanting to sell online.

During their conversation, the woman caller can hear from the background that a male, assuming it is the partner or husband, started an argument with the woman.

In the middle of their conversation she can clearly hear that the woman had threw away the phone, but it was still on speaker mode.

She can hear the woman crying and trying to defend herself from the male who was hitting her.

She can hear the sound of crying of a child who was probably terrified from what the child witnessed.

Next thing came into her mind was to call the police.

Unfortunately, the 919 Toll Free Line couldn’t receive her call at that time.

Lesson learned, our DV respondents should always check their phone on a daily basis to ensure that it is working 24/7.

Just lately this month of June 2022, it was alleged a man poured hot water on her female partner, then later poured kerosene on her before setting the 39-year-old on fire.

According to family members, there had been ongoing disputes between the de facto couple, but no one stood up to intervene, which could have saved that woman’s life in these two different cases.

The woman caller was concerned by the lack of intervention by neighbours and others present in that area especially at housing settlement where houses are adjacent to each other and we can clearly hear if a couple is arguing or some man beating up his partner or wife.

This happened on a Sunday late afternoon.

This particular housing community might not have a Duavata Partnership Program with our Fiji Police Community Policing strategy.

There is no harm in forming a community partnership with our Fiji Police Force fellow Fijian residents.

It’s about time that Housing Authority/Rental Boards give its tenants a DV policy prior to their moving in as a compulsory measure where the perpetrator will be evicted apart from the issuing of a DVRO.

FORMER athlete Joe Rodan Jr had a timely message for our athletes participating at the Pacific Mini Games in the Northern Marianas: “Give your best.”

He added, “physically, I don’t think you will be impressed by impressive times, distances and jumps, but whatever or whoever gives the best because all competition will be close and whoever has the mental toughness will be victorious”.

Beautiful words from a man who has been there and has given his best.

The Pacific Mini Games will set the platform for the Pacific Games next year which will be hosted by the Solomons from November 19 to December 2.

This will allow the Fijian contingent to carry out a SWOT analysis and devise strategies for next year’s Pacific Games.

Fiji has lost the spark that it used to have so more efforts will be needed both on the field and track.

I wish our athletes participating in the Pacific Mini Games in Northern Marianas all the best!