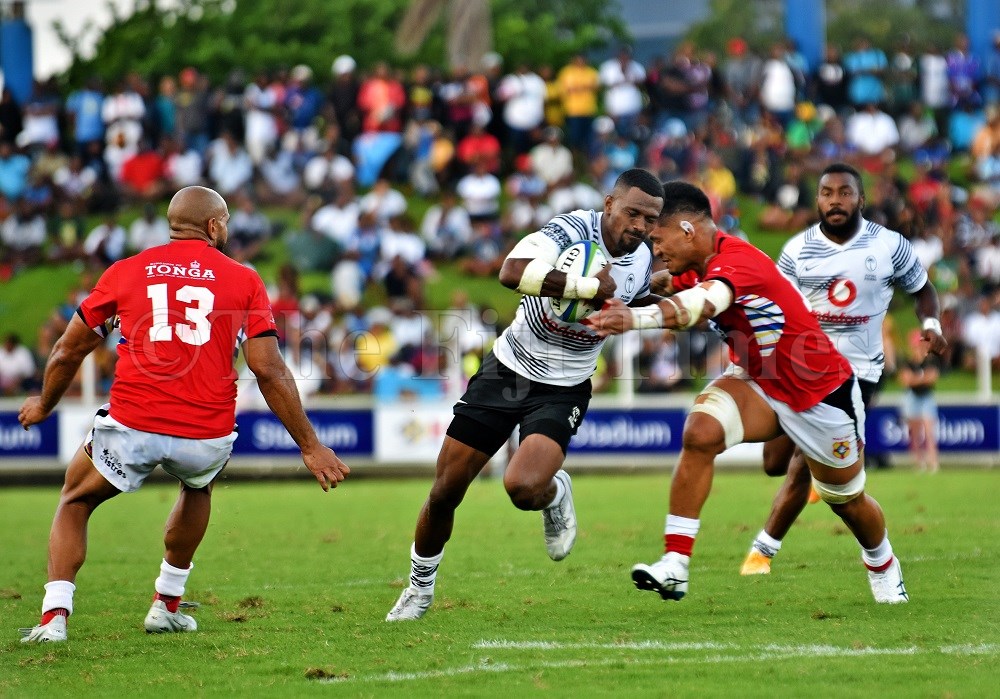 THE white colours of the Flying Fijians and Nadroga flew high with some scintillating rugby. The Flying Fijians blitzed the Tongans at the HFC Bank Stadium with a strong forward display -scrums, line-outs, rucks and mauls – that allowed the backline to run at will. Bossman Habosi scavenged for ball, joining the forwards to show his power and guts. The unsung hero was hooker Ikanivere, who was the driver in the forwards gaining metres. Ikanivere’s lineout throws were spot on, his tackling was fine, and his defence was the key to Tonga remaining scoreless Habosi was also not short in tackles. He was sizzling and had Tuivucu given him a pass earlier another Habosi magic would have unfold Money worth spent with Nadroga rugby topping off the day. Nadroga all the way. Kon roki. SHALWYN PRASAD Mukta Ben Place, Nabua

DURING one of our trips around Lautoka, we took a break at Marine Drive. We spotted a grown man looking at us. It’s an uncanny feeling to have someone staring at you. Then we noticed that he had a cloth and every now and then he’d put it to his nose and sniff it. Yes, he was sniffing glue and he wasn’t staring at us, he was high. We have seen many people sniffing glue on the streets of Lautoka and it saddens me. ALLEN LOCKINGTON Kava Place, Lautoka

WHY do some of us continue to patronise those who circumvent situations to reflect their own form of truth knowing deep within it is not the truth . DAN URAI Lautoka Drone solution THERE is an urgent need to use drones regularly to assist our security personnel control our boarders and marijuana farms, which comes at a high cost involving manpower. Our commissioner of police said in one of his earlier press conferences during the COVID-19 lockdown that police officers cannot stand guard at every inch of our boarders. Drones can be the solution to that manpower problems. Instead of buying body cams they should buy more drones and use it regularly. JIOJI MASIVESI Tadra, Votualevu, Nadi

IN his opinion piece titled “The break-away” (FT 2/7) Subhash Appanna, while alluding to the issue of the legitimacy and aspirations of the descendants of the girmityas in Fiji posits: “Might it be time for Indo-Fijians to ask themselves what they really want from Fiji?”. As a descendent of a girmitya all I want for all descendants is to be accorded the rights and privileges as explicitly stated in the Salisbury Declaration. That will provide us a sense of security that we belong to this country. In my view being called a Fijian does not sacrosanct that right. Recently we were told that our current Prime Minister had to be born so Fijians of Indian descent could be granted equal citizenship. Tomorrow that right could be disenfranchised by another leader. Prime ministers will come and go and our Constitution can also be abrogated as history has shown. What message does it send out when another politician claims that the political stability in this country can only be enjoyed as long as a particular political party remains in power. Such statement will not only incite fears, but will also lead to a feeling of insecurity amongst the Indo-Fijians. That is how fragile our status is. SELWA NANDAN Lautoka

RESPONDING to the Attorney-General Aiyaz Sayed-Khaiyum’s comment that “a lot of people want to come into government because they want to have power”, The People’s Alliance party leader Sitiveni Rabuka said his comment was “preposterous” ( FT 30/6 ). The dictionary defines preposterous to mean “contrary to reason or common sense; utterly absurd or ridiculous”. I think Rabuka is right . RAJEND NAIDU Sydney, NSW.

THE General Election (GE) date, will be made known, after the Prime Minister, advises the President, to proclaim the dissolution, of our current Parliament. That, in my opinion, is according to the Constitution. From then on, there will be a maximum of 51 days, before the GE commences, on polling day. I presume that the Fiji Election Office, only comes into the picture, ( pg.6. FT 03/07) after Parliament’s dissolution and technically, no sooner. EDWARD BLAKELOCK Admiral Circle, Pacific Harbour.

AS reported by Health Ministry permanent secretary Dr James Fong, the 158 COVID-19 cases in three days is very troubling. I plead with the ministry to immediately impose compulsory wearing of masks in all buses; public transport; stadiums and pavilions including supermarkets etc. All school children and tertiary students must not be exempted. It is indeed a welcome relief knowing the compulsory wearing of masks in hospitals and health centres. It is even more exemplary our police force will wear masks effective Monday, July 4, 2022. Can all civil servants and disciplined forces also do the same please? It will also help to have government ministers and members of Parliament as role models too? Or am I asking too much? Procrastination is the thief of time. RONNIE CHANG Martintar, Nadi

A LETTER writer says the poverty situation in Fiji cannot be ignored (The Sunday Times 3/7). That depends on whether the Fijian State has the political will to address the poverty situation by putting appropriate policies in place. Many from the civil society sector who work with the poverty stricken in Fiji say the State policy framework on poverty is inadequate. That needs to be rectified. The Fijian State cannot continue to abdicate its responsibility for the welfare of the poor in the country in its pursuit of other agendas. Only an irresponsible government will do that. RAJEND NAIDU Atlantic Blvd, Glenfield, Sydney, NSW

THE ball is now in play, in this political football. The teams are on the field of play, campaigning to the whistle. The teams have different platforms and strategies for this game. They are varied in their approaches, but the overall vision is the same. Some players have been red-carded, others in the sin – bin, Some are still on the sideline, waiting to run in. So it’s now up to the leaders, to master their team’s move, until it’s games over, when winning is the proof. When all is said and done and the dust begins to settle, who will be the one, to win this interesting political battle. The teams are on the field, the whistle blows, once more unto the breach, the game’s afoot! EDWARD BLAKELOCK Admiral Circle, Pacific Harbour.

THE Attorney-General must have been living on another planet when he continued to deny that there was no poverty in Fiji and whatever the indicator shared by FCOSS director does not reflect the true reality on the ground. What indicator do you have A-G to substantiate your claim? You continue to borrow money left right and centre? Isn’t that an indicator of government poverty by borrowing another $150 million? Or you would like to term it as smart borrowing? JIOJI M CAKACAKA Tadra- Votualevu, Nadi

SO the stray dog issue has gone right up to the A-G’s office. Soon it will go to the PM’s office and perhaps the President’s office. Why does it have to go that high. What were the Agriculture Ministry and SPCA doing? ALLEN LOCKINGTON Kava Place, Lautoka

HOW do we judge the Government’s performance? SUKHA SINGH Labasa

A BIG Salute to you boys. There was a moment even when the commentator said ‘Ba toh Ba hai’. Great display boys. We will do next time. ASHIS KUMAR Ba

ONCE the Government changes, the top wigs will support the new party in action. Why not now? Change is on the way. KIRTI PATEL Lautoka