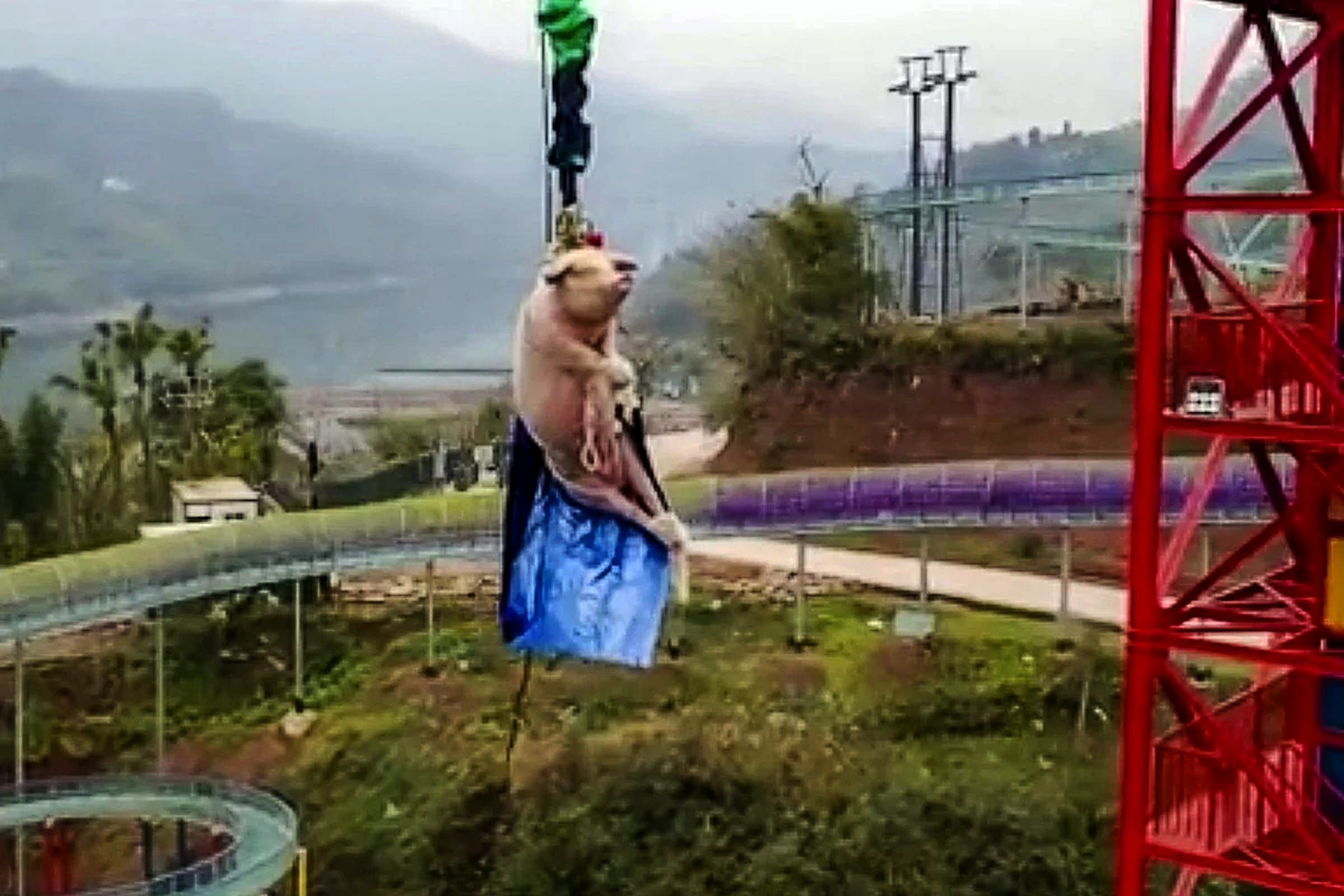 A theme park in southwest China celebrated the opening of its bungee jump by pushing a live pig off a 70-metre platform. Photo: Weibo

A THEME park forced a 220lb pig to bungee jump wearing a batman cape in a cruel stunt (Yahoo news 21/1).

What other cruel things are human beings capable of doing for its perverse gratification and titilation?

And we are supposed to be the highest intelligence on planet Earth?

Is the coronavirus plague a curse from the tortured pig!

ALTHOUGH Fiji is traditionally a giant in sevens rugby and a crowd pleaser, the introduction of the world sevens series has exposed us.

Losses and disappointments will come our way regularly.

Not once a year in late March or late April as before.

In the lead-up to sevens tournaments, a lot of hype build up which carries players and fans away.

But as soon as it becomes certain that we are not going to win, patriotism vanishes.

Off goes the TV.

The “refreshments” lose their taste.

Out come the improvised missiles and piercing words.

The referee, coach, players and whoever comes in the way, gets it.

The Hamilton loss proved to be another so close and allowed to slip away.

A slip further away on the standings.

But it’s always good with me if we do not lose badly or end up in the lower ranks.

After the boys work on ball retention, receiving kick-offs, stop forcing the issue, move the ball with pace, finish close to the top, win the Hong Kong tournament and Tokyo gold, we can focus on being a host.

OUR performance in Hamilton was disappointing.

After scraping past Samoa and Australia, our boys lacked the fighting spirit against Argentina.

Fiji lacked direction and the spirit as Argentina continued with the momentum from Dubai where they hit us hard by denying us possession.

Argentina meant business and the Pumas showed us how urgent they were to win the match — not only win but win with a big margin.

Three consecutive tries and we were done!

We missed tackles in the soaring temperature and our forwards failed to win the restarts.

There was little improvement from the last tournament despite promises made by Baber.

With this performance, I’m having nightmares as we prepare to defend the overall WRSS title and the Hamilton 7s title.

It’s frustrating to see the way in which our boys played in Hamilton and seeing the way Kenya, England, France and NZ have played, I must admit we are way below standards required to compete at international level.

The journey continues with this week’s Sydney 7s, but it’s all gloomy for Fiji.

Nothing looks bright, trust me and apart from the huge Fijian crowd, the news that Fiji could host a tournament in 2023 and the fact that Jerry Tuwai has become our leading try scorer the rest was all dull and stale in Hamilton.

Tomasi Cama Sr was missing and we saw another disastrous outing in Hamilton.

Two tournaments now that we have been thrown out of the pool and ironically, Argentina beat us in both the pool matches.

Time for some hard action if we are to win a tournament.

FIJI had a good chance of fighting back in the second half in their final pool game against Argentina.

Denied possession in the first half they paid dearly with Argentina scoring three tries to Fiji’s one.

In the second half the momentum shifted and I’m sure, every Fijian supporter in Hamilton and those glued on the screen anticipated a comeback.

They started well until Tuimaba’s meltdown after running past defenders and breaking tackles.

The same scene we witnessed in Singapore against South Africa last year reared its ugly head with Tuimaba in the clear and one defender to beat decided to kick and chase after the ball.

There was support on the right and if he had held on it would have been a different ball game.

Tuimaba is an exceptional player with tremendous speed and skills.

I hope Tuimaba learns from this experience as he builds towards Tokyo 2020 Olympic Games. When it mattered the most, the team played below their potential and we can only hope they learn from Hamilton and make amends in Sydney.

WAS it a Cabinet decision?

The ministry responsible seems not to bother about the majority views against DST.

No explanation on whether there was any analysis taken before its implementation or the advantages economically to the nation.

Is it a sign of weakness to change that decision?

WHEN it comes to sevens rugby or the full code, patriotism and the national flag become rockstars.

Whether on the local or overseas scene, the Fijian flag comes out in huge numbers.

We also have clothes and other items which contains the colours and design of the flag.

The flag is unique and the pictures and symbols represent rich history.

Is writing on the Fijian flag disrespectful and should not be permitted?

SADLY, ever so sadly, Fiji lost fairly and squarely to a better Argentinian side in our third pool match.

All the hype, positive and reassuring statements from head coach Baber mean “nought”.

I am angry and very disappointed.

Where to from here head coach?

THE game against Argentina in Hamilton showed that the Fijian team seemed to have forgotten that you need possession of the ball to win.

Perhaps it is now time to face reality and forget about winning the HSBC series, but use it to prepare for the Olympics.

PERHAPS it will be a good exercise for rugby experts to count how many kick-offs were won by Fiji team in their three pool games.

Maybe the answer will tell us why the Fiji team was deprived of possession in almost all games.

INDIVIDUAL play is and will always be our downfall.

LANDS and Mineral Resources Minister Ashneel Sudhakar advises people writing in the social media to “Put some meat on it” ( FT 26/1).

The meat analogy is no longer a good one.

There is now a global movement against mass meat production and consumption (see the BBC documentary Meat: A threat to our planet (SBS 22/1).

It would have been better for the minister to say “Put some substance in what you write”.

ON behalf of my family, I commend John Kamea for his article on Vunilagi in The Sunday Times.

My dad and mum taught in Vunilagi and I was born there.

Hence, it was emotional moment for us reading the article and seeing those beautiful pictures from Vunilagi.

During our days there in the ’80s, Vunilagi was densely populated and we enjoyed the tropical climate and village life.

Family bonding was great and race and ethnicity was no big deal.

Isa, I miss those beautiful days.

During my last tour I was saddened to see that Vunilagi was empty, but yes, the memories from Vunilagi will forever remain with my family.

A matter of relativity

TIME seem to move so fast these days,

whether you are old or young,

its almost the end of January and another new decade has just begun,

soon it will be March and the end of the first quarter,

then the cold will set in and it will no longer be hotter,

especially when you are busy,

but at the end of the day,

its really just a matter of good old relativity,

enjoy the moment and have a cup of tea,

because whatever will be,

as they say will always be!

NOW that the Labasa Town Council has received a $200,000 garbage truck as a gift from the Japanese government, could the good minister instruct the council to revert to the old garbage rates.

I wonder if the Japanese government was informed that the garbage collection rates were increased by more than 200 per cent this year.

THE school year 2020 has started with mumbling and grumblings on two major teacher issues.

First, the promotion of teachers on open merit recruitment system.

This has been dubbed as draconian by some.

The Ministry of Education seems to be determined to enforce this formula irrespective of the consequences.

As you already know, some school managements are up in arms regarding the postings of principals to their schools without prior consultation.

The Ministry of Education seems to be treating all schools as any government department where they have the final say.

However, government may be well within its rights to post anyone to government-controlled schools.

But to enforce the same attitude in committee-run schools borders on insensitivity.

History of schools in Fiji shows that they were established by religious groups to promote their language, culture and traditional beliefs.

As a result most schools in Fiji are managed by religious organisations.

To remove them from the educational equation is a big blunder.

They should be consulted as to who will head their school.

Acceptability by the management is core to the success of the school.

The ministry must stop creating conflict situations and start talking to the school managements.

I am sure there is an alternative way.

Belligerence helps no one.

The second issue is the contract system.

I think this has done much to discourage bright minds from joining the teaching profession.

Those who have joined keep looking for alternative employment simply because there is no career guarantee in the teaching profession.

If we want quality teachers then we have to ensure that teachers are treated with little bit more of respect and dignity.

I appeal to the school managements and the Ministry of Education to come to an amicable solution in the interest of all concerned with education of our children.