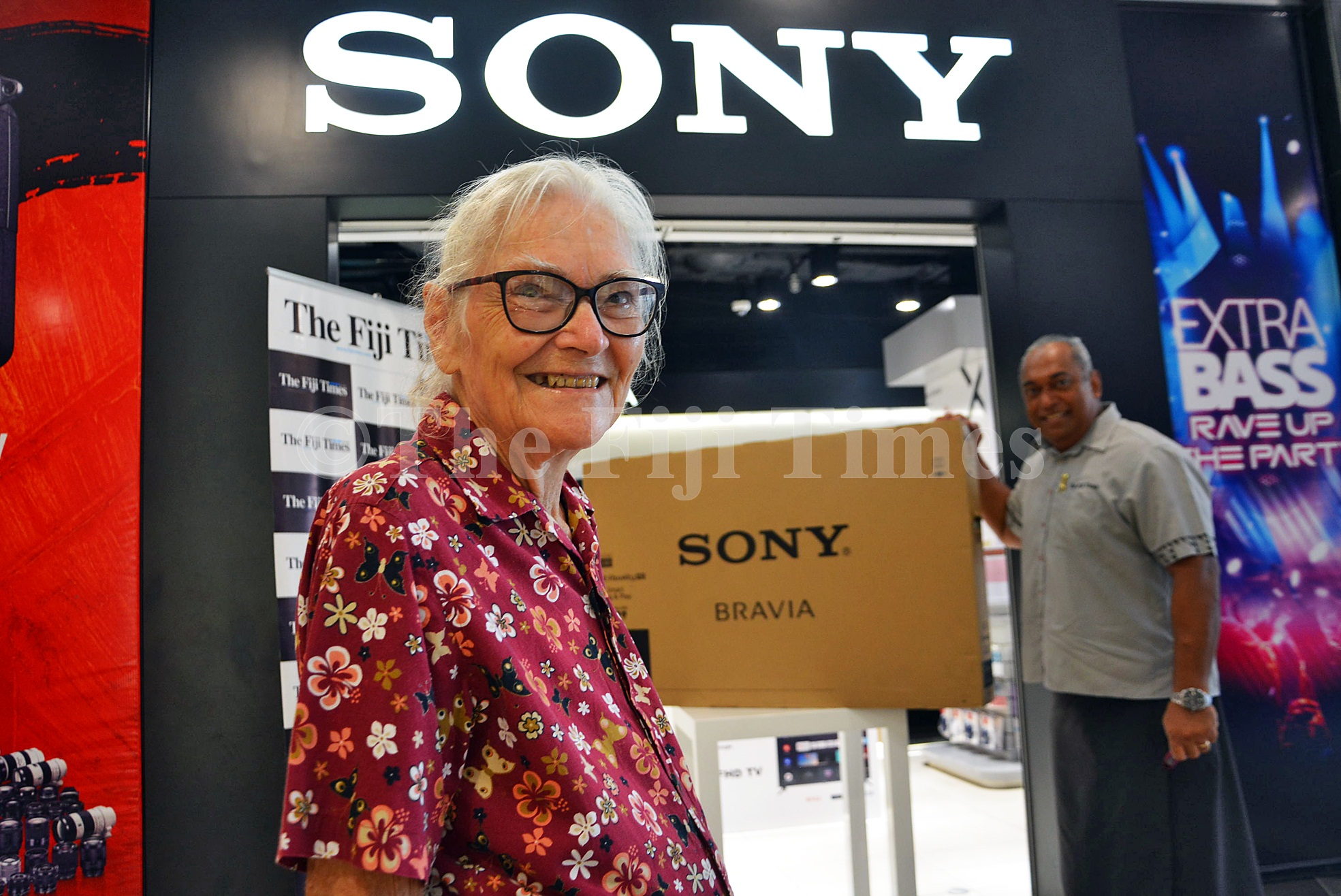 Letter of the Year winner Tessa MacKenzie (left) is all smiles while Fiji Times Editor-in-chief Fred Wesley holds up her Sony Bravia TV at Prouds in Suva. Picture: ELIKI NUKUTABU

A voice for all women

Heartiest congratulations Tessa Mackenzie for being the recipient of The Fiji Times “Letter of the Year” award.

Well done. Thank you for standing up for all women voters. Really absurd, having to switch to original birth certificates, just to vote in 2022.

Under the FijiFirst Government, following the Nawaikula court case, the rules changed, most vindictively.

OUR Letter of the Year award recipient Tessa Mackenzie was full of smiles as she received her prize at the Prouds outlet in Suva.

Her courage, passion and commitment towards her social life and towards writing letters continue to inspire Fijians and writers to this column.

I read Tessa’s letter titled “Thank you” (FT 21/01), and I was touched by her humility and down to earth nature as she appreciated the generosity of The Fiji Times and Prouds.

She also encouraged others to write, not in hopes of a prize, but to share their thoughts and opinions, complaints and even expertise in order to make the letters page of The Fiji Times the most interesting and the most read page of them all. Tessa is a living legend, and I’d love to read more of her letters.

She is an asset to our letters to the editor family, and her win marks great achievement for us writers.

It is my prayer that she continues to be blessed with beautiful health! RAJNESH ISHWAR LINGAM Balgovind Rd, Nadawa, Nasinu

The UK will no longer mandate the wearing of face masks and requirements for vaccine pass with workers returning to work.

Can our Ministry of Health collaborate with the UK government on data they have gathered to make this decision.

If we continue to uphold our COVID-19 protocols whilst leading nations like the UK are relaxing theirs then something is not adding up unless we have a super virus. SAILOSI NAEWE Naduru Rd, Nausori

ON January 15, 2022 the Tongan volcano Hunga Tonga-Hunga Ha’apai. erupted without warning underwater some 65km Northeast of the Tongan capital Nukualofa.

It was rated 5.8 on the Richter scale. Thus releasing enormous energy which sent mushroom shaped clouds some 20km in the air. Along with it poisonous sulphur gas, ash, volcanic rocks/sand and molten lava. Tongans were caught by surprise as they ran helter and skelter seeking safety.

As panic struck the tsunami devastated Tonga. The fishing boats floundered and crops decimated. Scrambling for higher grounds was the only option left; fear and desperation gripped Tonga. The communications network was destroyed and Tongans living in Australia and New Zealand prayed for their loved ones and hoped for the best. Disaster relief became a challenge as Australia, New Zealand, Fiji and the United States tried to send aid.

The sonic boom created by the volcanic eruption was heard throughout the Pacific. Shock waves travelled at the rate of 1000km per hour and reached 7000km away. This awesome release of energy was because of the tectonic activity when two plates collide, one pushing the other deeper towards the earth’s centre when it melts and forms lava.

The molten lava creeps through the cracks and explodes as an active volcano which sits on the Pacific fire girdle. Tonga is not yet out of trouble.

The volcano continues to explode and sends tremors around the Pacific. However, it is soothing to note that the nations bordering the Pacific have sprung into action to help the Tongan people.

Yes, this is showing generosity and the milk of human kindness. May Tongans recover from this natural disaster soon. DEWAN CHAND Donu Place, Namadi Heights

IT’S 2022! Do you know if Fiji has smoothly transitioned into Australia, New Zealand or the Singapore of the Pacific as pledged by our acting Prime Minister at one of the FijiFirst’s political rallies some time ago? I had even elatedly shelved my future migration plans after hearing that pie in the sky promise.

The fact of the matter is I now appallingly regret my ill-advised judgment. Secondly, we have been resolutely assured that the FSC is not a penniless or a technically insolvent entity. If such surety holds any substance, then I believe that sugarcane farmers, who had been slogging the land for generations, would not have hastily abandoned the once thriving industry in masses, opting for alternative and more cost effective livelihoods.

Oh, I just recalled, what is the status of former FSC chief executive officer Abdul Khan’s fraud investigation that has been for a few years now amounting to millions of dollars?

Has this matter of public interest been effortlessly swept under the rug? I hope not. And then we have our Defence Minister sternly cautioning other politicians not to dictate terms to his government, specifically in times of natural catastrophes. Would not such hostile pronouncements undeniably illustrate the mannerisms of dictatorship?

Mr Seruiratu, who I believe accepted his ministerial portfolio after the unlawful military coup of 2006, conveniently overlooks the significant component that Fiji is a democratic state and every individual has the autonomous right to express their sentiments against the presiding administration, be it a politician, a Form 4 drop out, a peanut seller or a commoner.

Lastly, I can positively affirm that the 10 years of the so-called unparalleled economic fruition has only fetched more misery and suffering to the already fragmented Fijian economy and it’s oppressed citizens.

Sorry, I am only “relying on facts” honourable A-G (FT 23/01). I believe the FijiFirst Government has obviously lost the plot, yet they are adamant to stay politically relevant.

We unfortunately cannot even have a functional angiogram and cath lab at Fiji’s largest hospital. So much for making Fiji better than Australia and NZ. NISHANT SINGH Lautoka

MARCUS Rashford scored a dramatic stoppage time winner for Manchester United against West Ham at Old Trafford to shoot the Red Devils into the top four of the Premier League in a stirring 1-0 victory.

A hard-fought game heading for a stalemate ended in sensational fashion as the never say die Red Devils conjured up an old school, late, headline-hitting climax. Rashford tapped in to convert an Edinson Cavani cross and take the roof off Old Trafford.

He falsely filled the immigration form that he didn’t visit any country in the past 14 days whereas he did.

This is a deliberate lie. This is disgrace to tennis on the whole.

The number one player in the world is lying on an official document which is punishable by law.

He should be suspended from playing all ITF tournaments for the next five years. PARAS NAIDU Lautoka

THIS may incur a hefty cost, but if we are seriously focused on winning the HSBC series which is fast evading us with our non attendance at top level or the first ever Commonwealth sevens or regaining the Sevens World Cup, then we must follow the Fiji Drua strategy and camp in Australia with a pool of players and map out a plan to win.

We will require a lot of soul searching and funding as time is an essence. SHALWYN PRASAD Mukta Ben Place, Nabua

IT’S almost 10 years now since Fiji FA introduced 90 minutes soccer in all the tournaments saying that it will improve the standard of soccer in the country.

You all have seen the results so far and it has gone the other way. No where in the world they have tournaments like in Fiji, but only league matches and still they play better soccer than us. Now we hear that out of 10 premier teams only eight will be playing in the tournaments because of 90-minute soccer.

Why? Just because you can’t fit in all the teams or you do not want to change the format of the games.

Give all the 10 teams equal chance so that every district is given the opportunity to fight for the price.

Make the games more interesting and faster and with one hour matches you can have two matches for a team in a day too.

Go back to the old format of having tournaments because people are going away from soccer now .

They are getting bored with 90 minutes soccer in tournaments. NARDEO MISHRA Suva

THE recent flooding at Nadi Town caused by TD03/Cody brings to mind a question I have for the Minister for Waterways Dr Mahendra Reddy.

I have not noticed any mention of the flooding being minimised by the two dikes installed further up the river. Did they do the work expected or didn’t they?

Would the flooding have been worse if the dikes were not there?

I wonder what the answer would be? NORMAN YEE Martintar, Nadi

OUR two iron ladies Dr Alisi Vudiniabola, who is the Fiji Nursing Association president, and Shamima Ali deserve a pat for being the voice of ordinary Fijians.

While Shamima continues to speak against injustice, rights and dignity issues faced by women, Dr Alisi has become the beacon of hope for the Fiji Nursing Association as she continues to voice her members’ grievances.

During these trying times, our iron ladies have stolen the limelight. Shamima and Dr Alisi are outspoken and fearless, and I’m proud of them! RAJNESH ISHWAR LINGAM Balgovind Rd, Nadawa, Nasinu

I hope those bosses will go the extra mile for those nurses they “acknowledge”. Otherwise Khali bhaat. RICK EYRE Labasa

ANYONE would think the streetlight on the right when you enter Hedstrom Place, Balawa is a motion sensored streetlight because it blacks out every minute when there’s no movement.

The brightness is dimmer than a kerosene lantern. Also, our street sign is missing.

Someone must have felt in love with the word Hedstrom. WISE MUAVONO Hedstrom Pl, Balawa, Lautoka

YES, they can hop on a jet and fly over to the best health facilities around the world.

We just go to our corner road clinic and get Panadol and words of encouragement.

STRAIGHT below the article Acting Prime Minister to Fijians: “Rely on facts (FT 23/1)” we have the article where Fiji Women’s Crisis Centre co-ordinator and human rights activist Shamima Ali says “Fijians are left behind when it comes to accessing quality health care” citing the example of the not in working order cardio equipment at the CWM Hospital.

Is that a fact? Is that why the prime minister and the attorney-general jet off to world-class medical facilities overseas as Shamima contends? RAJEND NAIDU Sydney, NSW, Australia