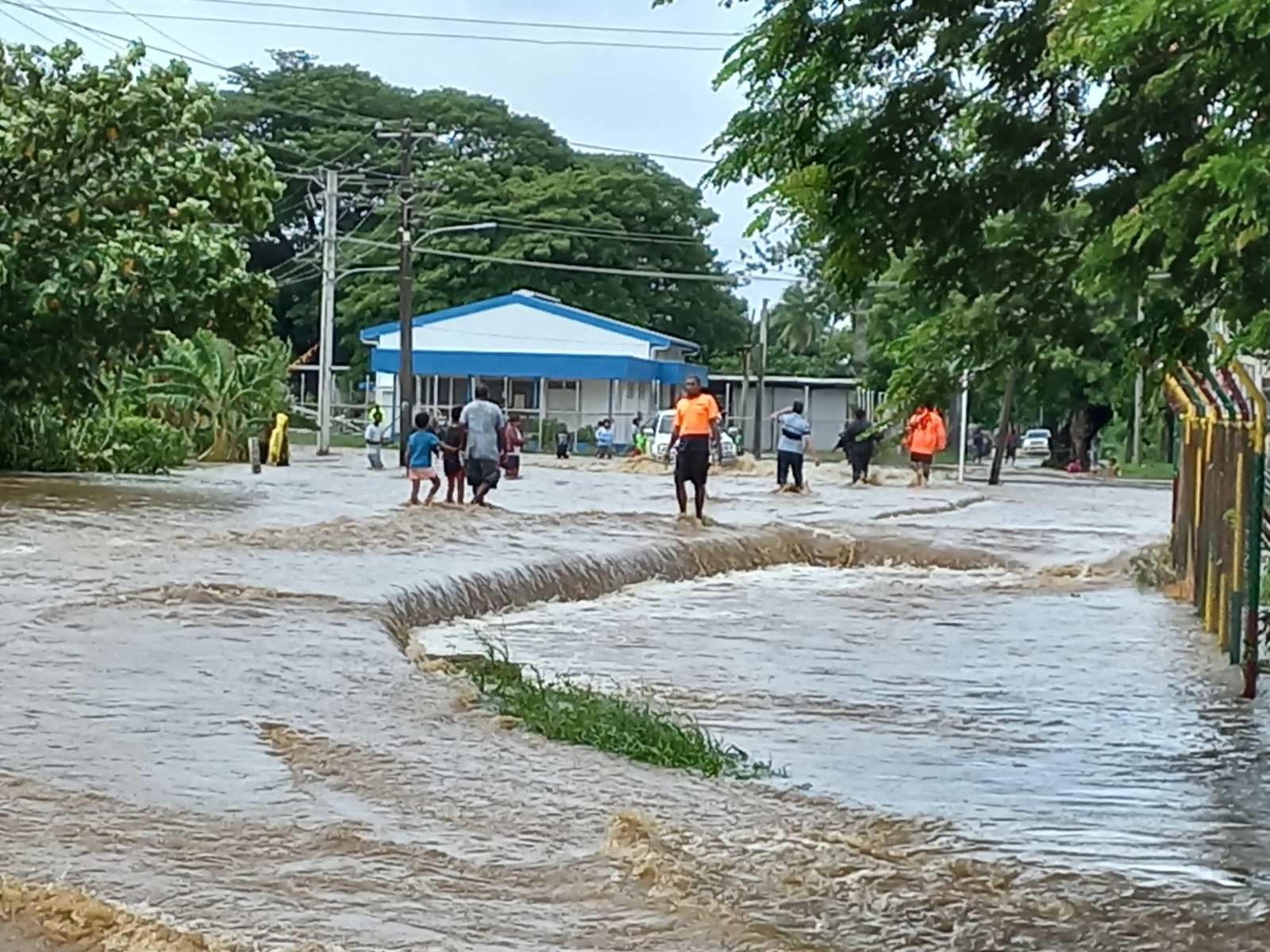 People wade in floodwaters at the entrance to Nadi. Picture: BALJEET SINGH

NOT the start that Fijians wanted, but I guess it was coming as the Fiji Meteorological Service issued a Category 1 cyclone warning and the Ministry of Education stated that all schools would be closed today.

Heavy rainfall resulted in many rivers bursting their banks and water seeping into towns.

Fijians were plagued with the pandemic, and now they are forced to deal with heavy rainfall, the possibility of floods and strong winds.

As we anticipate severe changes in the weather pattern, it is important that we be proactive, and we take necessary precautionary measures.

The safety of every Fijian matters and it should not be compromised as lives are important.

Being prepared will keep us alert and on our toes.

The editor-in-chief via his editorial titled ‘Weather warning’ (ST 09/01) did not mince his words: “Mother nature can be unpredictable.

However, we can do a lot with prior warning.

On reflection, we do know what to do and what is expected of us.

We have been reminded.”

THE cruel, senseless and cowardly battering and assault of a 75-year-old resort owner 90 minutes from Savusavu Town, is a clear indication of how sick some of our people, I am led to believe, have become.

Please bring back the birch.

75 strokes for this coward please.

One stroke for each year of her twilight years on Earth.

I am very angry.

No punishment is ever good enough for such culprits.

Our late dad was murdered in Sabeto, Nadi in his shop almost 50 years ago.

We know the pain, loss, suffering, mental anguish and sorrows.

We still live it.

WE read in The Southeast Asian Times article “Cambodia’s official visit to Myanmar gives legitimacy to military dictatorship, says NUG” (9 January) that Cambodia’s Prime Minister Hun Sen was welcome on arrival in Myanmar on Friday, January 7 with “a guard of honour”.

Giving legitimacy to a brutal rogue military regime that has been committing atrocities against its own people — men, women and children — since day one of its violent takeover of the democratically elected government and locking up Aung San Sui Kyi, the leader of the peoples’ free choice, is morally repugnant.

There is nothing honourable about the Cambodian PM’s official visit.

It’s more a case of birds of the same rogue feather flocking together.

IN the last pandemic in 1918 there were only two control measures available to contain the flu virus — wearing of protective masks and social distancing.

There were no apps, vaccination, latest technology equipment or a plan B.

Today we have so many alternatives to look at to prevent the spread of the deadly virus and yet we have still not learned to wear a mask properly and maintain the two-metre social distancing the very two main reasons that controlled the virus 100 years ago.

Will we wait for another 100 years to talanoa veilomani and learn how to simply protect ourselves from viruses?

JAN NISSAR seems to suggest that the slight majority who supported Fiji’s newest political party in the recent polls are suffering from insanity and needs to get their heads examined.

Once again he has chosen to shoot the messengers rather than the message.

Apparently he is unable to come to terms with the fact that the support for the ruling party is dwindling.

Maybe because he is so blinded by his obsession with the FijiFirst party that he cannot accept that polls is a good indicator that people want to see a change in government.

He also makes unsubstantiated insinuations about the credibility of the polls, again he demonstrates his ignorance of the reality on the ground.

I also find his chastisement of the slight majority as being grog doped rather contradictory for he fails to realise that it is the same majority who voted for FijiFirst in 2014 and 2018.

Not all are gullible as you might think for they are quite capable of making rational decisions.

He will do well by doing some soul searching as to the reasons for this shift.

For a start I suggest that he should read Richard Naidu’s article (FT 8/1) to gain a better understanding of the public perception of how Fiji is being governed.

I WRITE to warmly congratulate Lynda Tubuya for resigning from SODELPA – a sinking political ship – and joining Sitiveni Rabuka, The People’s Alliance.

This is a smart move and she knows exactly where her political future lies.

This is Lynda’s extremely well thought out move to forge ahead politically.

She is well educated, an effective leader and an astute politician.

She keeps in touch with her supporters at the grassroots level.

This is well reflected in the results of the last election and I have no doubt that she will do even better this time around.

Fiji is the hub of the Pacific and plays a vital role.

Therefore, we need to cultivate young leaders, women in particular, who have a role to play in the politics and the economics of our country and the Pacific.

I see Lynda as one woman politician who has a big role to play in years ahead.

Lynda is an icon for many young Fijian women who aspire to do good for their country.

I wish her every success in her chosen path.

In the process, she gave up the seat that she secured in Parliament under SODELPA in 2018.

Lynda is confident that The People’s Alliance party will form the next government.

After listening to her supporters from her constituencies and those from abroad, she made the decision.

This was bound to happen with the recent string of activities taking place in the SODELPA camp.

The People’s Alliance party will be strengthened with Lynda’s presence and it will be interesting to see other names joining Rabuka’s party.

The 2022 General Election is brewing a lot of excitement.

All the best Lynda!

THE court sentence to life in prison for three white men for the chilling murder of young black jogger Ahmaud Arbery (FT 9/1 pg.10), shows the system is beginning to take cognisance of the fact that “black lives matter”.

That is a good thing for America.

Never too late to do the right thing by the people of colour who have long been the victims of racial injustice in that country.

WELL, Jan Nissar, never mind how good the FijiFirst party is, they have been in power for too long.

Who knows, the new party might just make our lives a bit easier than what it is now.

COVID-19 is still here and mutating despite the availability of a number of vaccines.

As worldwide cases surge, I wonder if medical experts would ever consider labelling COVID-19 as a lifestyle disease.

In the past two years, only one major event has taken the world by storm and that is COVID-19.

Everyone is affected and no one is spared.

There are some good learnings out of this virus and there are many consequences on the global economy.

Now, the virus will tell you who is rich and who is poorer.

Who is inside and who is outside.

All we want is water from our taps.

If you can’t do that, then do us all a favour and “jiko”.

May I humbly ask the madam minister as to how many worldwide educational institutions has she visited to authenticate her questionable claim?

By the way, Premila Kumar is my second favourite minister after Dr Reddy.

They are both very entertaining.

NO offence to teacher unions.

To date, may I ask, how many food packs, personal protective equipment, financial assistance, medicine, educational packs, of any form of assistance is provided to any student or family in our country?