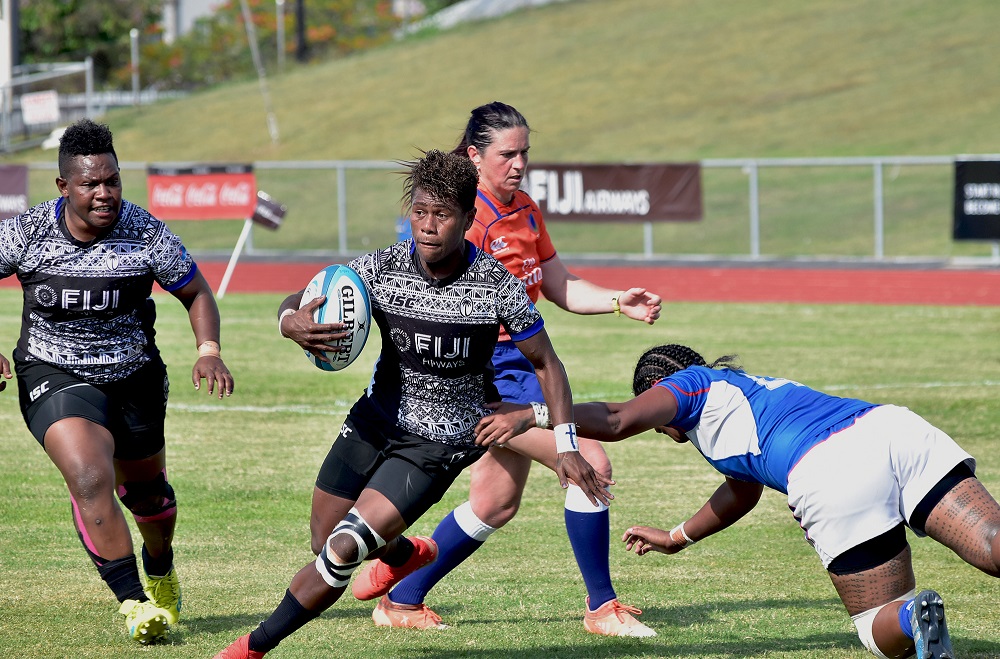 Lavena Cavuru on attack for Fijiana against Samoa during the Oceania Rugby Women's Championship at Churchill Park in Lautoka. Picture: BALJEET SINGH

HEARTY congratulations to the Fijiana for beating Manusina Samoa (41-13) at Churchill Park in Lautoka to make the 2021 RWC in NZ.

However, let’s start the preparations early to do well in NZ.

Excessive kava drinking and cigarette smoking have been known widespread habits practised by many members of Christian churches in which they take pride in, including the two largest denominations in the Methodist and the Catholic churches.

The mere fact that these churches tolerate such substance abuse drives the idiom “the blind leading the blind” all the way home and many find that the religious organisations that they turn to and reach out to for counsel is itself dysfunctional.

And so it is that churches end up with ministers who are guilty of substance abuse and intemperance advising those who are seeking to rid themselves from the habits and live a spiritual life as faithful witnesses to the acknowledgement of their bodies being treated as the temples of God.

Sin is obvious and many have resorted to pleasure, lust, drunkenness, revelings, and wantonness.

And getting doped has been one of the greatest sins in our churches. Where wounded church members listen to wounded ministers, the light of God’s love and grace will most certainly be dimmed.

AH Seona, I thought time was catching up with you as with the rest of us.

A few years ago your The Fiji Times articles seemed to appear less frequently and then you take over page 9 (FT 1/12) give us an article among your best.

What starts off as a human interest piece, what some might describe as a typical weekend story, seamlessly moves into those questions which we have all been asking and gives it to us in a way typical of Seona Smiles, straightforward and to the point, questioning the acceptance of Grace Road so widely here, not withstanding the list of restricted activities as listed in the Foreign Investment Act being restricted to Fiji citizens only, the Brij Lal exile fiasco, Thurston Gardens land grab and the ridiculous multi-story monstrosity in a simple residential Suva neighbourhood.

Yes, the silence is deafening.

Where have they gone

I WAS rather shocked when I read (ST 1/12) that excessive kava drinking and cigarette smoking is driving people away from the Methodist Church.

And to add to that NCDs related issues is also a cause. Wowza!

I am of the opinion that the church is not doing what it is supposed to do and that is to turn people away from what is not good for them.

So, these people who have left the church, where have they gone.

Are they still practising their doctrine or have left the church for good and become atheists or agnostics?

I AM not surprised that Miss Fiji didn’t get an award. Not even one. Well the reason and questions should be asked by the committee or organisation.

I JUST found that politicians in Sweden do not have luxury privileges, official cars and drivers for their politicians.

They have to travel by public transport.

They do not have any immunity and their pay is only two times more than elementary school teachers.

Can our politicians or ministers start using their own vehicles?

YES, Dan, I thought I had seen something, but I could be wrong.

I have watched a few of the televised Parliament sessions, but have never seen them in prayer.

But if they do pray, they should think about it because soon after that the rigmarole starts.

I had asked a friend if he knew and he said, “yes, they do pray”.

I asked what the prayer was and he said, “Lord forgive us for what we are about to do.”

HOW committed are Fiji and other Pacific Island countries in banning seabed mining.

Measles on the rise

SAD to read the number of measles cases being reported are on the rise and I hope that more awareness will be carried so that people are made aware of the causes and effects of the deadly disease.

14 cases have been confirmed and the number is expected to grow as people move around during the festive season.

I also plead with the Health Ministry to ensure that enough vaccination is in stock so that everyone has access to the vaccination.

Finally, I commend the health officials who have been working round the clock to combat measles!

THE Ministry of Fisheries is aiming to have Fijian farmers produce and supply 1000 metric tonnes of tilapia by 2029.