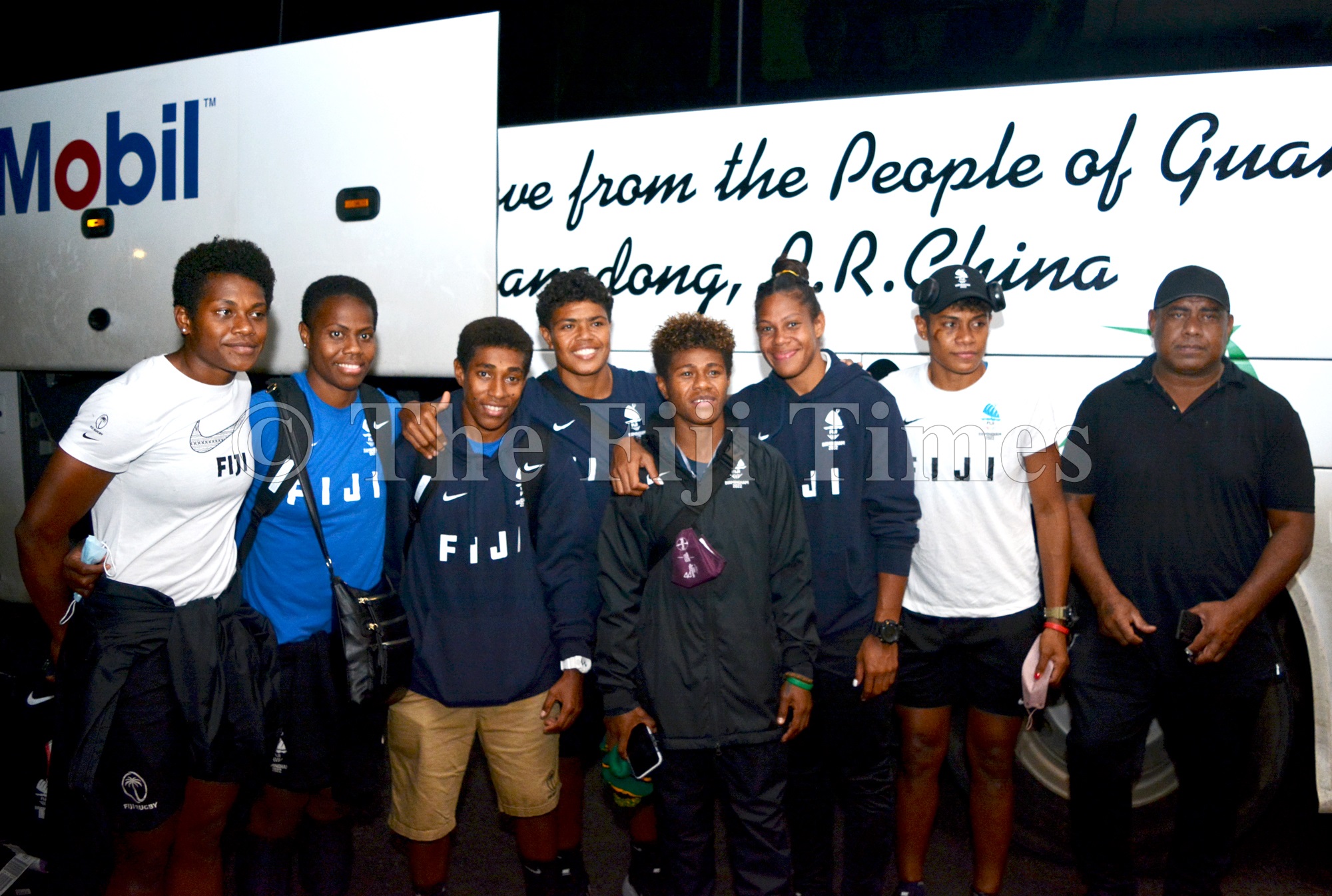 Part of the Fijiana sevens side at Nadi International Airport. Picture: BALJEET SINGH

Get behind our 7s teams

FORMER Fiji men’s and women’s 7s team coach Iliesa Tanivula called on fans to get behind the men’s 7s and Fijiana as they prepare for next month’s RWC 7s in Cape Town. The pinnacle of the abbreviated code has evaded the Fijiana and the men’s 7s team since 2005. After settling for silver medal in the Commonwealth 7s, the men’s 7s team is preparing for the Los Angeles 7s. The side won the Melrose Cup in 1997 and 2005, beating South Africa 24-21 and the All Blacks 7s 29-19. The side lost in the semi-final to England (21-7) and Australia (22-14) in 1993 and 2001, quarter-final in 2009 to Kenya (26-7), and semi-finals in 2013 and 2018 to the All Blacks 17-0 and 22-17. The Fijiana finished ninth in 2013 and 11th in 2018. Hence, a lot will be at stake when both teams will travel to Cape Town with the aim of restoring glory. Both teams must watch the ’97 and ’05 victories at So Kon Po Stadium. The pride, determination, passion and tears will motivate them to play their hearts out for the Cup. All the best to both teams! RAJNESH ISHWAR LINGAM Balgovind Rd, Nadawa, Nasinu

JUST like the stray dog issue, we the people suffer loud gospel music. We have been accosted by loud music, we sit quietly in our homes and accept the loud music. It’s so loud we just understand the authorities have done what they can possibly do and that’s it. If I have to move, I’ll go to the moon, at least there will be peace and quiet. OK, let me put back the ear plugs and ear muffs. ALLEN LOCKINGTON Kava Place, Lautoka

WHEN facing troubling national economic headwinds and things are not working out financially, “borrow smartly,” is the gist of advices we are all hearing. Come on Fiji. This is the way forward, is the national message being sounded. The burden of repayment of our huge debts rests squarely with our youths, our children, grandchildren and thousands of future generations — as painful as it may seem. Retirees, most fortunately, do not have this noose around their necks. We worry for all our future leaders. RONNIE CHANG Martintar, Nadi

FERREIRA : Town council elections are essential (The Sunday Times 14/8). What a breath of fresh air in the views expressed by Frances J. Ferreira , the Commonwealth of Learning skills director, on the central place of town council elections in sustaining democratic governance in the country. As a past mayor of Grootfontein in Namibia, she knows what she is talking about and she has been frank enough to share her honest views on this critical issue for the people of Fiji. That stands in stake contrast to a lot of the mob from the diplomatic and international circle who tend to gloss over this and other issues to appease those in power in the country. I thank Ferreira for speaking her mind so candidly on a matter impacting so significantly on the people and on democracy in post coup Fiji . Her honest views are appreciated enormously. It allows us to take stock of where we genuinely are on the democracy front 16 years after the 2006 coup. RAJEND NAIDU Sydney, NSW, Australia

I BELIEVE there is a lot of merit in a call by the Fiji Women’s Crisis Centre co-ordinator Shamima Ali that during an election time there should be a caretaker government for the sake of creating a level playing field for all political parties. Just look at what is happening right before our eyes. On one side we have the current Government where the ministers, assistant ministers and the Prime Minister all are equipped with government vehicles, drivers and all the resources at their disposal. They are moving to most of the villages, settlements and islands distributing materials and even cash. It must be remembered by all that all expenses involved in travelling including cost of fuel is paid by the taxpayers of our beloved Fiji. During an election year we borrow more for such distributions. Now look at the other side. How can we expect the other parties to compete with their own limited resources. Even if they sell a roti parcel they have to account for it. Details of any donations to any party should be given to the elections office. I strongly believe that to have a free and fair election all parties involved should have an equal opportunity to face each other. A lot of taxpayers’ money will be saved if we go for a caretaker government and let the current ruling party fight this election with their own resources. After all I believe their bank balance should be healthy if compared to other opposition parties. VIJAY MAHARAJ Navua

HUMANITY is holding its breath while the world is teetering on the edge and brink of a nuclear war. The crisis between Russia and Ukraine seems like a never-ending one. The situation is getting worse on a daily basis as Russia holds Ukraine to ransom by capturing its only nuclear plant and using it as a garrison. It is nerve wracking to say the least. In the Middle East, Israel and Palestine seem to be at war all the time. Recently, serious and devastating engagements took place between the two. This is a long standing fued and seems never-ending. The ugly side of humanity sends the world on an edge. In the South China Sea, China has assumed aggressive posture towards Taiwan after the visit of Nancy Pelosi, the speaker of the House (US Congress). The Chinese military arsenal was on full display, thus sending the message that you will get burnt if you play with fire. Now China has come up with a White Paper on Taiwan. It claims that China will take Taiwan by 2049 at any cost, even if it means war. It claims that Taiwan is a renegade state of China under one China policy. Hence, the re-unification move and to “re-educate” the Taiwanese. It is nerve shattering to think of a third world war which can easily slip into a nuclear war. In the event of a nuclear war the entire population of the world could be wiped out. Simply because the superpowers are armed to the teeth with nuclear armed ballistic missiles. Plus space based weapons, handheld and battlefield weaponry, electromagnetic rail guns, hypersonic missiles,etc. China has created seven artificial islands to dominate the South China Sea. It’s mind boggling, yes, the world is sitting on edge! One wonders what the Security Council and the United Nations are doing. DEWAN CHAND Donu Place, Namadi Heights, Suva

“DONALD Trump under probe for espionage” (News.com.au ST 14/8 ) and “obstruction of justice”. It was high time the former US president was reined in. He has been getting away for far too long. The credibility of America’s democracy is at stake here. Faith in it in America and the world can only be restored when the rule of law is applied without fear and favour in dealing with the former president. RAJEND NAIDU Sydney, NSW, Australia

THE good thing is our youths are understanding enough to make their own decisions. The recent setbacks in our country such as the high cost of living and unemployment rates for the graduates speaks for itself. Out of these youths there are also some who have to struggle with basic food items. They are not oblivious to the hardship thrown at us. $1 per day is not going to work on all because there are some who have the ability to think outside the square. The flow of the air is not the same any more. KIRTI PATEL Lautoka

JUST thinking out loud. Here’s my million dollar question. Can the Nadi River from Denarau all the way to the Nadi Bridge be dredged deep and wide enough to allow for jet-boat ride as a major tourist attraction and improve Jetset Nadi profile and the town’s economy? Food for thought. Tourist eateries including McDonald’s, Burger King and coffee bars could add to some entertainment for all concerned. RONNIE CHANG Martintar, Nadi

THE month of August is an auspicious one for Hindu brothers and sisters as they celebrated Raksha Bandhan and are celebrating Shri Krishna Janmashtami. I wish Hindus a happy and blessed Shri Krishna Janam Asthmi. May you have a celebration with much rejoicing and high spirits. It is my hope Lord Krishna will touch each individual with heaps of blessings and love. It is important that lessons learnt from his life are incorporated to make life meaningful. Jai Shri Krishna and Radhe Radhe! RAJNESH ISHWAR LINGAM Balgovind Rd, Nadawa, Nasinu

Back from the dead

I BELIEVE the mighty All Blacks have risen from the dead. PRANIL RAM Votualevu, Nadi

I BELIEVE the 2018 election results was fair warning to the PM and FijiFirst that voters are not happy with their leadership style. Yet they continue with the same showing little or no respect to views of Opposition political parties. DAN URAI Lautoka

Erik ten Hag did not have his way in the premier league as Manchester United suffered consecutive losses. After the 1-2 loss to Brighton at home, Manchester United’s rough start continued after losing 0-4 to Brentford in shocking fashion. The Bees shocked the Red Devils and punished them for a lackluster defensive effort. United felt the full force of their sting and ETH faces a mammoth task versus Liverpool at Old Trafford. Bitter fans voiced their opinions on the ailing performance of some senior players. RAJNESH ISHWAR LINGAM Balgovind Rd, Nadawa, Nasinu