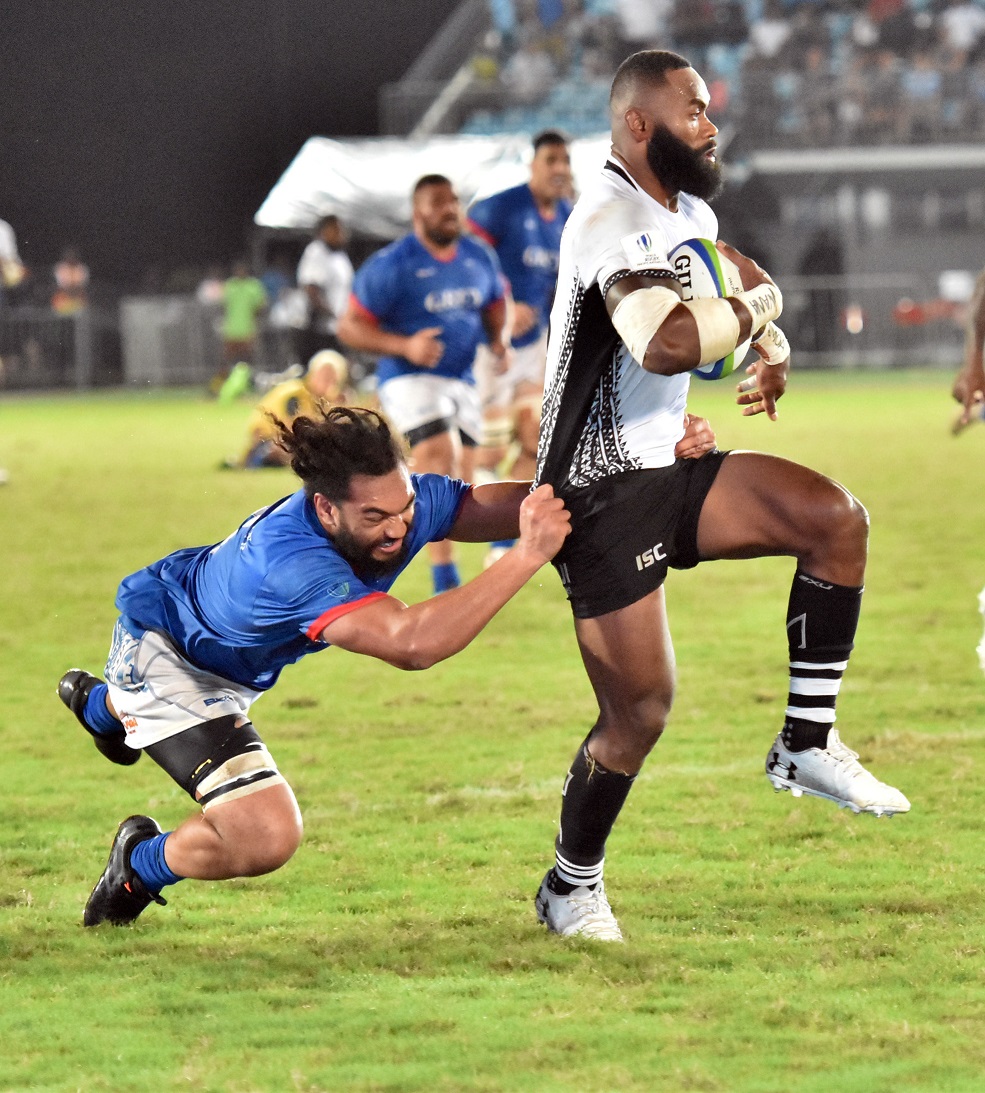 Flying Fijian Semi Radradra in action against Manu Samoa at the ANZ Stadium in Suva on Saturday, August 10, 2019. Picture: RAMA

After the inspirational performances against the French and Maori All Blacks, the Fiji Airways Flying Fijians Pacific Nations Cup (PNC) campaign has seen an overall slump.

The three PNC Tests so far has been riddled with handling errors.

This and excessive kicking has seen us end with low possession.

Tackling is much more tiring than attacking.

Relentless tackling takes its toll on the defending teams.

Technical and superior teams take advantage of this.

The much-hyped about world-class back line has hardly been able to showcase their skills.

We have been receiving high ratings and expectations of an extraordinary performance.

So far in the buildup, what have we got to show for it?

The Test against Tonga should be treated like the opener against the Wallabies.

No more unnecessary kicking away of possession.

Just a few days away from the 2019 Rugby World Cup, John McKee and his support staff have to be concerned.

If we are to be genuinely considered a threat, let’s takeoff.

We are the Flying Fijians.

As we draw closer to this year’s RWC it’s getting exciting.

In the Pacific Nations Cup a new winner was crowned.

The Brave Blossoms, who were the only unbeaten team, were crowned champs after outclassing the USA Eagles (34-20) while Fiji beat Samoa in a lackluster affair (10-3) and Tonga thumped Canada (33-23).

The Flying Fijians should get serious after the Wallabies outmuscled the All Blacks (47-26) in an amazing game in Perth while the Welsh Dragons have displaced the All Blacks as the number one ranked 15s team.

On the other hand, congratulations to this year’s RWC top bet (the Springboks) for winning their first Rugby Championship in 10 years after the convincing (46-13) victory against the Pumas in Salta.

It’s getting exciting and at the same time our boys face a massive task of qualifying from the pool of death.

But then we did it in 2007 after slaughtering the Dragons in our final pool match and we can do it again.

Finally, the All Blacks got a lot of soul searching to do as they surrendered their Rugby Championship crown.

Finally the mighty All Blacks have succumbed to the Wallabies and what a hiding the ABs got.

Just when many people were writing off the Wallabies, they bounced back and bounced in style.

I trust there will be no excuses from the ABs camp but just to say they were beaten by a team that clicked.

Our PM may have Uri Geller-esque powers in that by just speaking to Pio Tikoduadua he can instigate muscular spasms and thus an involuntary squeezing of Mr Tikoduadua’s own spectacles.

Question: are there CCTV cameras in the Parliamentary premises that would reveal who is spinning tall tales?

And please do not tell me the cameras are not working.

Surely Mr Tikoduadua has to know more than he is currently letting on in order to call our PM a hypocrite?

It would seem that the way the Government side has milked the Bulitavu issue has caused such an emphatic push-back from the Opposition potentially threatening to lay bare skeletons that may be in some cupboards.

Intriguing times ahead, I suppose.

Now the Speaker’s reaction to Mr Tikoduadua’s emotional announcement in Parliament that he was assaulted by the PM and his glasses broken.

I believe the reaction was pathetic.

It may have been “it’s got nothing to do with what is going on…” as regarding the rules and protocols of Parliament.

But surely, I believe a more empathetic response would have elevated the Speaker’s stature on both sides of Parliament.

IF by law registering freshwater clam divers, bamboo raft makers, traditional boatbuilders, etc., will be a financial advantage for the government, then I believe it is a ridiculous choice by the policymakers.

However, if the decision to enforce new laws that will safeguard and minimise accidents that lead to death out in the rivers or ocean, then I believe it is for the safety of our fellow citizens.

On another note, can all the money generated by the maritime officers confiscating boats and imposing penalties on boat owners, to please fix headless, submerged and rusted beacons starting here in the capital to Nukulau Island.

If the beacon restoring budget allocation is not enough from the fees collected to repair all outdated beacons, bargain from the green machine coffers and tell them it is for better use for commuters and ocean goers daily.

It would be a very beneficial idea to see cinemas around the country introduce fresh fruit skewers and fruit juices available apart from the famous pop corn and fizzy drinks.

Just a suggestion and food for thought.

Have a blessed week ahead!

IT is the norm that when a spate of robberies occur, activities that unsettle members of the community or during the festive season, police presence in public places and communities will be raised.

But when the season wraps up or the provoking goons have been detained or in hiding, the police force will also wrap up their “should be” daily presence patrolling public places and communities.

I believe it is a cycle of their police presence and inattention that goons choose to create havoc on selected public places.

Have our police force presence in public places be a norm of duty day and night.

In our various mainstream media forms and organisations, some news items take precedence over the others.

News items get different angles of presentation while some receive unworthy status.

Despite this trend, mainstream media remains more reliable for news than social media.

At the least, traditionally.

As the Rugby World Cup draws closer teams are stamping their mark in every way they can.

The Wallabies just did that, just when writing them off completely, suddenly they beat the All Blacks by a huge margin.

Everyone is surprised and that’s what teams are like as the World Cup gets closer.

Congratulations to the Wallabies and don’t write them off yet.

Master Ronil Lal led the Babasiga Lions to this year’s Inkk BOG final and regardless of the outcome I compliment the Lions for maintaining a clean sheet.

As I put pen to paper, the Lions were preparing to face Lautoka in the final and I thank the team for displaying great sportsmanship and soccer skills!

The revelation by a senior officer from the Ministry of Education that child abuse cases are reported every week is indeed shocking (FT:11/08).

What is most concerning is that reports included sexual cases and that perpetrators were mostly close family members and in some cases teachers.

What has become of our society?

When our children are not safe at home and at school it’s a clear sign that we are falling apart as a nation.

The senior officer also highlighted that the ministry had forwarded a circular to all heads of schools about the protection of children (FT:11/08).

Such cases should be reported to police for investigation and incarceration.

A circular is not good enough and doesn’t cut into solving the problem.

A  circular literally is a merry-go-round without any real purpose!

The Commissioner of Police was reported (see FT 8/8/2019 ‘Fifth time unlucky’) to have declined for the fifth time, the application by the Fiji Trades Union Congress’ (FTUC) to march through Suva.

Although the necessary documents and completed forms were submitted more than a month ago, two days before the designated date of the march, FTUC was notified that Mr Qiliho had not approved the application.

I believe no explanation was given.

Ultimately, I believe it is the government of the day that must be held accountable for the non-transparent and arbitrary behaviour of senior public servants.

I believe the minister responsible as well as the Attorney-General owe it to the workers of the country, and the public the explanation about the refusal for the FTUC application which has not been forthcoming from the Commissioner of Police.

At stake in the matter of the continuous rejection of FTUC applications for permission to engage in peaceful protest march is workers’ rights and trade union rights.

I hope in this regard the ILO and other UN agencies in the country are taking note of this.

I read in the Times online (London) that the rugby governing body said that it had commissioned a trial to a law change in which the height of the tackle would be lowered to the waist.

I would love to see a game with that law.

It will leave the arms free and our boys who are off-load kings will have a field day.

Could Fiji Rugby union do a trial with a few teams so that we can see if it is fun or not.

Someone said soon rugby union will not be nice to watch because we want to see the big hits.