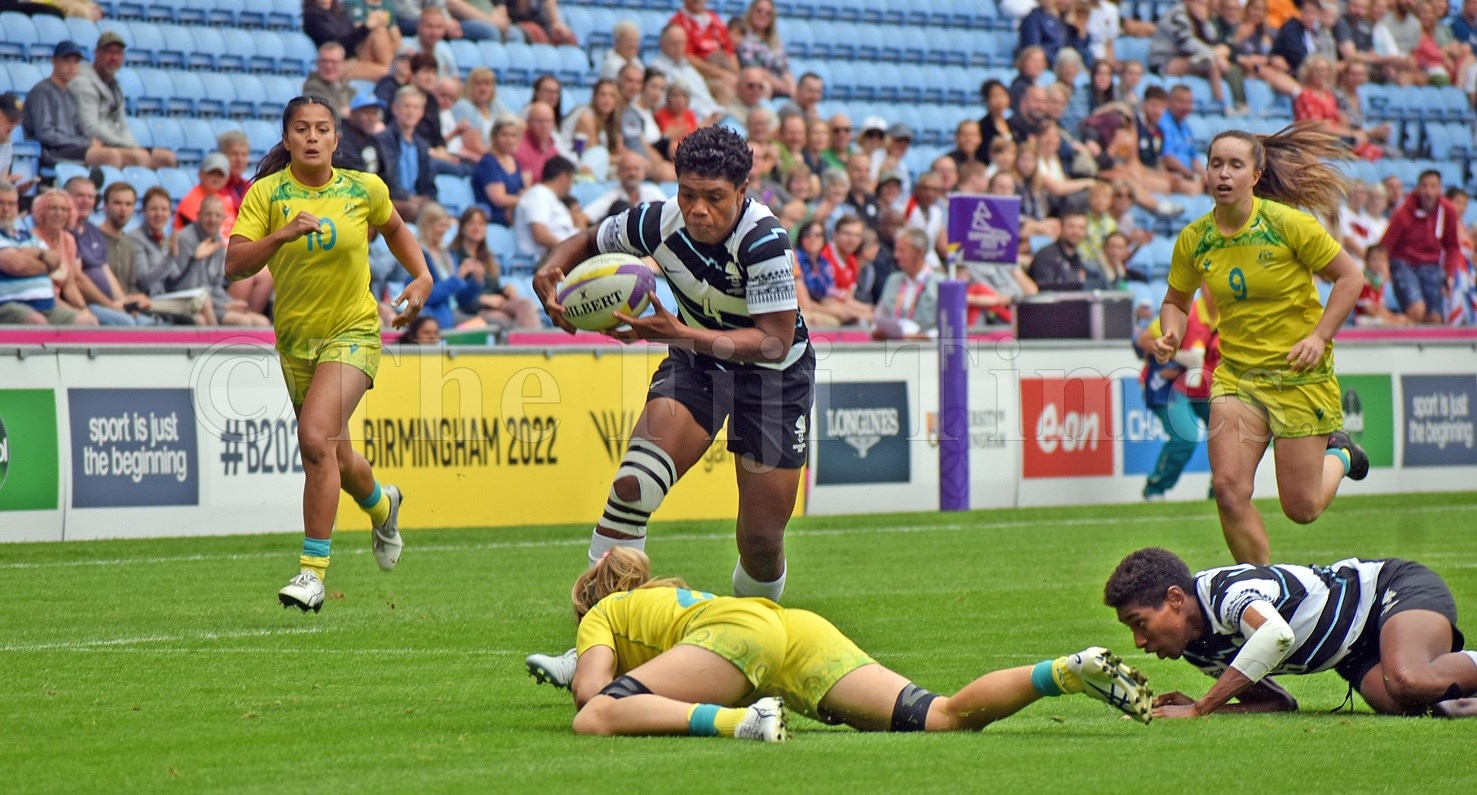 A medal in the bag

Finally, the Fijiana 7s have reached a gold medal play-off and as the sevens commentators are buzzing the courageous and never say die girls are taking the Commonwealth Games 7s rugby by storm. With NZ and Australia taking centre stage with recent wins, the Fijiana is now breaking that ice and why not. The girls are making history. The Fuli-coach side is sealing its rightful place in 7s rugby. My flag, my prayers, my singing and my loud cheers goes to the Fijiana. Show them to them. Ratu Ben Ryan, your 2016 prediction is almost coming to fruition. Go Fijiana go. SHALWYN PRASAD, Mukta Ben Place, Nabua

IN a story in The Fiji Times titled “Eka Conquers Diabetes” (27/7/’22) her message to readers is clear: that she once had type 1 diabetes and now she has overcome it. The writer is not a journalist, per se but an employee of the organisation funded by the Australian Government to promote an approach to health that isn’t mainstream. Balanced journalism is when all aspects of a subject are covered equally; unbalanced or irresponsible journalism is when this does not occur. Ask any doctor, as I did, if there is a cure for type 1 diabetes and they will tell you categorically that there is none. Readers without scientific knowledge or access to it may be easily persuaded when reading such a story. It is especially dangerous for patients with type 1 diabetes who may be desperate to hear about a cure and abandon recognised treatment for a “miracle cure”. Irresponsible journalism is dangerous and damaging. JULIANNE SUTHERLAND Tamavua

THE Skipper Cup and Inkk Farebrother Sullivan Trophy will rest in the Western Division – Nadi and Nadroga. The Nadi side beat Naitasiri to clinch the Skipper Cup in front of passionate Nadi fans who could not control their emotions and delight when the siren sounded. It was a delightful scene, seeing tourists celebrating with Nadi fans – the beauty of rugby. Turuva Lumelume, 35, who tasted victory when the Jetsetters last won the prestigious title alongside Eseroma Nabalawa, scored the winning try. Nadi created history and wrote another chapter in Fiji’s rugby history winning the brutal affair and winning a game which was written in the stars. The Jetsetters lost their inspirational players – Jolame Luvevou and Ilisoni Galala – but stayed focused and came out winners. Kitione Taliga, who was my man of the match, Maikeli Sivo, Tunidau Rafaele, Vilive Aria and Tevita Mociu stood out for Nadi while Chris Minimbi, Inoke Ravuiwasa, Jone Navori, Sireli Kaloucava, Fili Waqainabete, Kaliova Mocetadra and Etonia Rokotuisawa stood out for Naitasiri. Nadi won the U-19 competition too. Congratulations to the Kings of Fiji rugby- Nadi! RAJNESH ISHWAR LINGAM Balgovind Rd, Nadawa, Nasinu

The Minister for Local Government, Premila Kumar, has stated that there were no plans to increase city rates (FT 30/7). She said: “Surely, we can increase the rate, but this is not the time to increase the rate because we know people are going through hardship and we will not increase the rate, unlike the rest of the world.” However, when the city rates for Lautoka were increased last year she refused to comment. When approached for a comment, Ms Kumar said: “You need to ask the chair for Nadi and Sigatoka town councils. I have no comments, you just ask them and let them confirm to you” (FT 12/1/21). Comparatively, I believe 2021 was a worse year than 2022 when a lot of ratepayers lost their jobs and also many small businesses were closed. In February last year it was revealed by Lautoka City Council CEO that only 28 per cent of ratepayers in Lautoka have paid their rates. He said: “As of 31 January 2021, Lautoka City Council has received rates from 2261 (28 per cent) ratepayers out of 8163 ratepayers” (FT 19/2/21). I understand the total arrears in rates currently stands around $9 million. If this amount is recovered and the compliance level is increased, then there will be no need to increase the rate. I want to ask the honourable minister whether it is fair to keep burdening the compliant ratepayers while the defaulters continue to enjoy the same services and facilities without paying. I wonder why there is sudden empathy for the ratepayers. SELWA NANDAN Lautoka

MINISTER for Local Government Premila Kumar, stated, “Levuka only has 166 ratepayers. How do you expect to beautify Levuka and to deliver the services?” (FT 29/7 P4). That is for you and your Government to fi gure out, ma’am. You had approximately 16 long years to do so. Alas, why appoint two so-called “special administrators” for a small town like Levuka? What is the  justifi cation? Nothing has changed with the inclusion of the so-called SAs. Simply, the so-called SAs are just a waste of time and money and instead the funds earmarked for their exorbitant salaries should be diverted to maintaining the upkeep of the town. Yes, it would certainly make a difference. Oooops, did someone just mention about the Heritage Department? Isa “our” Government. ANTHONY SAHAI Levuka, Ovalau

THE price of a wheat has nearly doubled since Russia invaded Ukraine. That’s because the two countries make up almost a third of the global wheat trade. Higher wheat prices will have a significant impact on raising food prices and reducing living standards. It is feared it could cause widespread poverty and social unrest. Fiji and other Pacific nations should focus on other means of flour apart from wheat. Cassava, dalo, breadfruit and other local produce can be sourced. Flour is a pretty apparent baking agent. When you first start baking, you will learn very quickly that you need at least a few different types of flours in your pantry — all-purpose flour, bread flour, cake flour, pastry flour and cassava flour. The list goes on. Here you can see the nutritional and health benefits of cassava flour. Cassava flour can be used in place of wheat flour in several recipes. It is made from the cassava root vegetable. This is a carbohydrate-rich crop that also includes vital vitamins and minerals and is devoid of gluten. In terms of taste and texture, many people believe it is the most similar gluten-free alternative to wheat flour. This makes it an excellent gluten-free substitute for wheat flour in baking and cooking. Cassava flour includes carbs, which are the body’s primary source of energy. It includes resistant starch as well. Resistant starches function similarly to dietary fiber. Resistant starches improve gut health by feeding beneficial gut bacteria during fermentation. Cassava flour may be used in a variety of ways, including baking. You may use it to substitute wheat flour in a variety of recipes, including bread, muffins, cookies, cakes, brownies and roti. Farofa is a Brazilian meal and is made from roasted cassava flour. Cassava flour is excellent for producing flatbreads and tortillas that may be toasted or grilled. It is more absorbent than wheat flour. The impact of higher wheat prices will be felt disproportionately by low-income consumers. This is because consumers on low income will spend a higher percentage of their income on food than higher-income consumers. Higher wheat prices will lead to higher prices of food in the shops. The rise in prices will depend on whether retailers and suppliers have stocks and future contracts to smooth out cost fluctuations. But, if the price rise is prolonged they will need to pay more to buy future stocks and prices will invariably rise over the longer term. NEELZ SINGH Lami

NUMEROUS accidents have eventuated along this extremely dangerous stretch of Grantham Rd especially at the junctions of Grantham, upper and Yarawa Rd and upper and lower Namena Rd. The accidents are never-ending. The authorities are simply not doing enough or do not know what to do. Install traffic lights, mark roundabouts and have more speed reduction or dangerous stretch signs to alert and protect both the people and property. I guess the public are losing the confidence or have already lost hope. Come on, do something now. ASISH VINAY PRASAD Prasad Rd, Raiwasa

IN the meantime, we can move on to chapter two. Who would be the biggest con artist in the history of Fiji? MOHAMMED IMRAZ JANIF Natabua, Lautoka

WITH all the boom happening in Fiji — the Bainimarama boom and Bula boom — Fiji must be getting pretty close to becoming like Singapore as the ” smart borrowing” A-G Aiyaz Sayed-Khaiyum had predicted, right? RAJEND NAIDU Sydney, NSW, Australia

THE threat of being taken to court is the worst form of attack on freedom of the press. The Fiji Times I believe can vouch for this. DAN URAI Lautoka