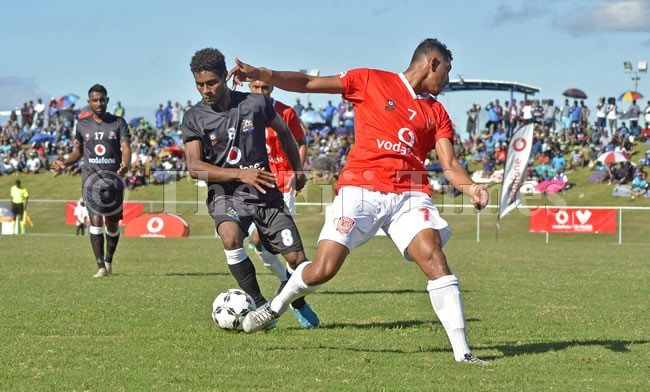 After the completion of pool matches western giants Ba, Nadi and Lautoka and southern bet Suva have made it into the semis. Lautoka buried previous disappointments of bowing out from the Fiji FACT pool stage by cruising past Labasa and Tavua while Rewa paid heavily for taking the match against Ba lightly as a draw was enough to send the Delta Tigers into the semis. On the other hand, Tavua had a disappointing show at Churchill Park as the giant-killers conceded 22 goals and returned home without a single point. The Tavua team which played in the Fiji FACT was a shadow of the side that upset teams like Suva and Labasa in the national soccer league. Meanwhile Nasinu won fame after holding Ba and Nadi and had the boys played well in their opener against Rewa they would have bagged a spot in the semis. Finally, on paper Labasa had a pretty skillful outfit but the boys failed to click. Missed opportunities and lapse in defence haunted the Lions as they could have beaten Suva. Nonetheless, it was not our day but I thank the “northern bullets” for giving their best as I look forward to the semis and Raymond Stoddart’s lovely commentaries on Radio Fiji 2! Rajnesh Ishwar Lingam Nadawa, Nasinu

Fiji FACT was started in Ba in 1991. It was Ba that had taken out the inaugural title defeating Labasa 2-1 in the final. If you look at the roll of winners, Ba FC still leads having won the cup eight times. Ba and Labasa were declared the joint winners of the Fiji FACT title in 1997. Behind Ba are Labasa and Nadi that have both won this title four times. I think Nasinu is the only competitor that has not yet carved its name on the Fiji FACT title. All the remaining competitors including Tavua and Nadroga have taken home this cup at least once. However, a new champion is set to be crowned as the defending champion Rewa have been bundled out of the tournament this year. This time, Nadi, Ba, Lautoka and Suva had all booked their spot in the semi-finals. The finals will be held at the same venue where the tournament had begun. The crowd is expected to be big because three western teams are in the finals. Let’s hope the crowd is treated to good quality football. Let’s see who takes out the title this time? Suresh Chand Nadi

The behaviour of some inconsiderate drivers has forced the Fiji Roads Authority to suspend all night works on the four-lane project along the Kings Rd. Really, I’m sure there are ways and means of controlling traffic to slow down when there are workmen on the road. Do it like the police, put temporary humps. Me as a driver will understand the need to slow down. I understand that there will be delays when roadworks are being done. It’s simple — but suspending works reeks of other reasons. Allen Lockington Kava Place, Waiyavi, Lautoka

Allow me to share my personal opinion with regard to the 52nd Asian Development Bank which was recently hosted by the Fijian Government. I believe one of the outcomes of hosting the meeting is that our Government is able to secure more loans and grants for projects as reported in The Fiji Times (06/05/09). However, as a concerned citizen, I am wary about the high debts that Fiji owes, and here comes another 2 billion loan extra. Should not the citizens of this country be consulted for making such huge amount of loans since re as we will be the ones responsible for paying them? Kositatino Tikomaibolatagane Vuninokonoko Rd, Navua

It is amazing to note those who have left the country for greater opportunity and found it. Many who weren’t able to further their studies locally and weren’t given the academic or community support necessarily are now graduating (with honours) in their new “homes”. Some of these were even deemed “failures” by their teachers. Perhaps a change of scenery and perspective is always necessary to fulfil one’s potential in life and great support from family and friends can go a long way. Joan McGoon Jetpoint, Martintar, Nadi

The battle for positions to the 2019 Rugby World Cup is definitely a huge struggle for our players and final selection is likely to leave behind some broken hearts. For example, in the backline, we have so many world-class players who can play at least two positions. Some players can play only one position but have almost extraordinary qualities that it’s hard to ignore them. From the halfback to the fullback. You name the position. Our coaches will have nightmares trying to determine which one gets selected over the other. Best to wait for the national team as it will be announced soon and their final preparation for the 2019 World Cup. Could this be our year? Will we defeat Australia? Only time will tell. The excitement in the Land of the Rising Sun is increasing. Floyd Robinson Toorak, Suva

No Dan, no political leader can predict the direction voters vote in the future, even based on past results! Recent history proves that when SODELPA was overly confident pre-2018 election. It is why they and their supporters are still reeling from that loss! Also, please get your facts right in that the FijiFirst Party won the 2018 General Election outright and there is nothing questionable about that. I believe what we all know is how SODELPA increased their support from the 2014 election and how FijiFirst lost them. Be assured that FijiFirst will not make that mistake again! Dan, you can hope and pray for SODELPA to win the 2022 election but that is a far-fetched dream if SODELPA don’t change the way in which they are managing their affairs. While the ruling FijiFirst government have issues that are questionable, they are still very much a force to be reckoned with. I believe it is difficult for many to trust and believe SODELPA especially in the way they have carried themselves, both in the past and now. It is why FijiFirst has the mandate to govern the nation and we all need to respect that and support them through, instead of being disruptive, unproductive, misleading and inconsiderably selfish! Co-operation, Dan co-operation! SIMON HAZELMAN Rava Estate, Savusavu

It’s now close to four years since Digicel Fiji bought Sky Pacific off Fiji Television Ltd and that was exactly the last time many of us northerners watched Fiji One news. What we get is pay TV in Sky Pacific and one of the conditions by Government when Digicel Fiji obtained acquisition of Sky Pacific was that it could not place local advertisements and local content on Sky Pacific hence the dropping of Fiji One and the inclusion of TVWan. This meant that tens of thousands of Fiji citizens had no access to Fiji One national news, our only Fiji news channel. Instead, we got PNG national news on TVWan. I’m no television expert but what I know is that we did have Fiji One News before the buy-out and now we don’t? Many have bought the Walesi decoder and aerial but still don’t get reception? The proper, wiser judgment in the buy-out ought to have been that Fiji One news be included and televised Fiji wide. The pressing question here is that it’s been close to four years since but still nothing has been done to rectify the problem? I live in Savusavu, Fiji, but I know more about PNG than my own country! I’m even humming their songs! How absurd is that? Simon Hazelman Rava Estate, Savusavu

Two rounds, zero point –– unusual in the case of Nadroga Rugby but yes this is the bitter truth that hurts as I reflect on the thrashing that the traditional champion of Fiji Rugby received at the hands of Suva (34-16) on Saturday. In the earlier round Nadroga was outmuscled at home by Nadi 40-18 and to date team Nadroga remains winless and has conceded 74 points. This shocking result has caught ardent Nadroga fans by surprise. While the trophy cabinet in Talenavuruvuru remains empty after last year’s loss to Suva in the Skipper Cup final and then also losing the Farebrother Cup there are ominous signs that it will remain empty unless a miracle happens as Nadi, Naitasiri, Namosi and Suva’s recent form puts them as front-leaders for the Skipper and Farebrother cup. I hope that the rugby brains in Tiko Matawalu and Esala Nauga and other rugby stakeholders will join hands to salvage some pride and restore fire- power and hunger in the Stallions to finish in the top four! Rajnesh Ishwar Lingam Nadawa, Nasinu

It is so sad that only one lady politician came to support the WAF workers. I am just wondering why the rest of the parliamentarians want to be neutral. Thank you so much Lynda Tabuya you are the Iron Lady of Fiji. Sukha Singh Labasa

After the ADB meeting in Fiji, Fiji has now proved that it can host any high-powered meeting of such magnitude. We have the conference facility, the manpower, accommodation and most important of all the security of delegates. These facts have been applauded by the delegates and at the conclusion of the meeting there wasn’t any incident at all. With Fiji known to be one of the best hospitality in the world and the friendliest people was icing on the cake. With delegates visiting Malamala Beach Club and local cuisine prepared by the TV personality chef Lance Seeto was just magical. With climate change as a hot topic at the meeting the delegates were able to see first-hand the geographical location of the islands of Fiji. Tomasi Boginiso Nasinu

During a grog session at home a friend who had come from Suva asked if the Botanical Garden swimming pool had been completed. I said it wasn’t. He quipped, “Well the groundbreaking ceremony took place two years ago and there were two reasons why it was taking so long.” When I asked what the two reasons were he simply said either the ground was really hard or they were digging a really deep pool. Isa, sad eh! Allen Lockington Kava Place, Waiyavi, Lautoka

A player was injured during the Fiji FACT at Lautoka. The medical team was called in to help. I was surprised to see the injured player being carried out of the field by two people, one holding both hands and the other one holding both legs. The China donated ambulance looks good but I wonder why no stretcher was used to carry the injured player who needed medical attention? Fiji Football Association and the referee for that game has a lot to answer for. Anyways after the pool games I was talking to a Fiji Football Association representative who was at the ground and he informed me that the referee will be taken to task for the above incident. Players are suspended for three years or so, let’s see if Fiji FA can suspend the referees too. Narayan Reddy Lautoka