Letters to the Editor – May 31 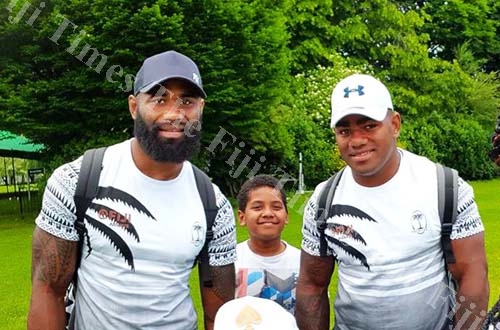 Semi Radradra and Josua Tuisova with a fan in London. Picture: Supplied/ Veilawa

Lethal pair
The world watched in fascination as Josua ‘The Bus’ Tuisova and Semi ‘The Trailer’ Radradra devastated the English defence in a scintillating and thrilling rugby affair. Later, Radradra was named man-of-the-match. The Pat Lam-coached Barbarians beat the Eddie Jones-coached ‘Roses’ (63-45) with ‘on your face’ hard hits, Pacific Island flair and running rugby. Barbarians had players who were burning their engine and demolishing the opposition. Imagine the pair in our 7s team for the London, Paris and RWC 7s and in our ‘class backline’ come the June Tests against Georgia, Samoa and Tonga and RWC 15s. Fiji has once again produced another ‘lethal backline pair’ bound to make headlines! Perhaps the best news fans received this week was that the duo had joined the 7s camp in London. All the best boys! Rajnesh Ishwar Lingam, Nadawa, Nasinu

Isa I read that Lawrie Gavin Whiteside, the founder of fashion label Tiki Togs, which was a household fashion name in the 1970s and 1980s, has passed on. An icon is gone. When I was growing up I had older relatives who worked at Tiki Togs. I believe that some people still have clothes with the Tiki Togs label. When relatives would come from overseas it was always to Tiki Togs to buy clothes. I remember I had a shirt that had a Tiki Togs label that I wore when I attended a Hibiscus ball at the then Isa Lei Hotel. Rest in peace, Mr Whiteside, your memories will live on. Allen Lockington Kava Place, Waiyavi, Lautoka

It’s with a great deal of sadness that we learnt of the passing of a very close and dear family friend, Lawrie Whiteside. We knew Lawrie for over 50 years through his late son, Des Whiteside, who was like a brother to us as we all grew up together in Naiqaqi. Their home at Gladstone Rd, Suva, became a meeting place for many of us as children, teenagers and then as young adults with families of our own. Lawrie was a warm, impressionable and quiet achieving leader having built the famous Tiki Togs label with his late wife Cherie. The brand became synonymous with colourful fashions in Fiji and even abroad and many of us wore their clothing with a sense of pride. Aside from his business acumen, Lawrie was an accomplished musician in his younger days having played the double bass with incredible gusto in a very popular band, a talented rugby player, snooker player and above all, a dedicated and loving family man who was loved by all. His warm and witty personality and his infectious smile will be sorely missed. We extend our condolences, love and prayers to Tanya, Michael and all of the Whiteside clan. Colin and Glenda Deoki and family Melbourne, Australia

Sometimes last month, while having a lunch break along the sea wall here in the capital, I overhead some conversations from some neatly dressed young men. I assumed that they just came out from either a military or police force interview. One of them said that it was so sad that they were the first to be removed just because they didn’t have a driving licence. “About, 200!” the other guy quipped. Few minutes later, the crowd grew. “Vacava?” I heard someone shout from the existing crowd. “Overage by one month!” someone replied. From their conversation, I noticed that some of these guys had completed Bachelor programs from universities but it seemed there was more focus on drivers only. Secondly, I believe they wanted a Year 12 pass in English and not a higher education qualification. I hope it is just a joke and not a reality. Usaia Tagi, Delainavesi

For the past two days the country has been inundated which can be attributed to climate change. But what comes with the rain cannot be blamed on global warming which is flooding, as I believe that is the result of humans’ negligence on mother Earth. The indigenous believe that the land and the people are bound together and it is also stated in the Holy Bible that man was formed from this very same earth, so why then do we continue to destroy and desecrate our mother Earth with all our littering and corruptible practices and lack of respect for our environment. I urge the bigwigs to take a closer look at home and fight the scourge called global warming by doing our bit and organising a major clean-up campaign and I urge all Fiji citizens to take pride in your country not only when we win a rugby tournament or game but practise simple rules like putting your rubbish in the bin and teaching the leaders of tomorrow to follow suit. Remember prevention is better than cure, so do the right thing and put your rubbish in the bin and keep the environment clean if not for yourself but for our children’s children. Come on Fiji. Lawrence Wara, Suva

I was reflecting on this line from Bang Gae: “Teamwork makes the dream work.” Amazing quote as I thought about our dream of winning the WRSS title. Our boys are so close to achieving that dream and this proverb is a reflection of the effort put in by them to win four tournaments. Even the power packed BlitzBokke and “big spending” NZ, Australia and USA won one tournament on the circuit. Baber has attributed the success of his team to the players’ commitment, sheer hard work, sacrifices, unity and togetherness. The Welshman has equalled Serevi and Ryan’s record of winning four tournaments. He is one short of equalling the record set by the team coached by Veidreyaki and managed by the late Master Lagiloa during the inaugural 7s series (1999-2000). That team had stars such as Serevi, Fero, Seta, the late Rabeni, Tuikabe, Qauqau, Delasau and Vunibaka. Fiji won the South Africa, Mar del Plata, Wellington, Brisbane and Japan 7s and finished second with 180 points, six behind NZ. Baber is the first Fiji 7s coach to win three tournaments in a row. If he grabs the London 7s it will be four in a row and he will arguably go down in teh history books as the finest 7s coach. Only Samoa and NZ had won four tournaments in a row. In London, Fiji faces NZ, Argentina and Scotland. The loss to NZ last year relegated Fiji to the trophy competition. Defending champion and the “Bravehearts” beat England 12-7 last year while Argentina denied Fiji our first series win when they won the cup quarters in France (35-21). Fiji must maintain consistency and their ruthless form. This means that teamwork is crucial and the boys must play the full 14 minutes. Since the inception of the London 7s Fiji has only won two tournaments at Twickenham Stadium — in 2006 and 2012 thrashing Samoa on both occasions 54-14 and 38-15. Pressure will be high in London but our boys left early so acclimatising to the conditions shouldn’t be a problem. Tovolea mada boys! Play your hearts out for all Fijians! It’s time to fulfil the dream. Win or lose, Viti noqu Viti! Rajnesh Ishwar Lingam Nadawa, Nasinu

A fatal accident happened at Natabua in front of the police post. It was unfortunate that the child crossed behind the bus and was hit by a vehicle that was coming down at speed. I am an elder and part of the Natabua community police and neighbourhood watch program and had in the past asked for speed retarders to be erected in our area. I usually travel in a vehicle where the driver slows down when approaching buses stopped at bus stops. The driver has saved a few lives because he was cautious. Pedestrians sometimes are reckless. We have had numerous little vehicle accidents and many near misses where drivers speed in the morning to try and avoid the traffic jam at the main road junction. I believe the Natabua housing area has an approximate population of about 2000 via the last census count, and it’s still increasing. We have the FNU campus here and that is not counting the workers and students. We have people who come here to work and then leave in the afternoon. We are a densely populated area. Once again I plead with the authorities to put in place speed retarders which will, and I say, will save lives. I wish someone will hear this plea. The speed retarders will save lives. Iliesa Baravilala Natabua Housing, Lautoka

The heavy and sudden downpour caught many napping. People were taken by surprise at the traffic which was a result of water sipping on to the roads. Although rain brought life to our surroundings, it resulted in despair as floodwaters inundated homes. Furthermore, children had to miss classes and some had to miss work. Call it misfortune or the negative impact of climate change, rain and floods have become part of life. We have to be prepared and face adversities resulting from bad weather. Rajnesh Ishwar Lingam Nadawa, Nasinu

The new word on nearly all coaches’ lips whenever they lose is … that’s football! I hope they understand what they are talking about. A. SHARIFF SHAH Savusavu

Thank goodness that the recent discovery of bullets at Natabua in Lautoka has prompted the Republic of Fiji Military Forces to tighten up its processes of handling ammunition. This is the word from RFMF chief of staff Brigadier General Jone Kalouniwai after investigations revealed that the bullets were properties of the RFMF. I am reassured. But is this item always on the high security control? But thank you for reassuring us. Allen Lockington Kava Place, Waiyavi, Lautoka

Oh my goodness. I thought it had always been stored under extreme tight control. John Brown Drasa Vitogo, Lautoka

Good strategy by Gareth Baber to include superstar wings Radradra and Tuisova in the sevens squad as this was the same master plan used by Ben Ryan in 2016 when he injected Jarryd Hayne in the same London 7s. This will now showcase stiff competition in the backs especially the rover and wing positions and will also provide the platform for a possible series win. London we are about to be bulldozed by the bus that will leave a trail of sevens magic. Toso Viti joka kece …cauravou qaqa. Also all the best to wizard Anand Sami and our Babasiga Lions in the FACT semi-final … sizzle and dribble to the net. Shalwyn Prasad Mukta Ben Place, Nabua, Suva

No matter how rich or poor you are, I believe all life will come to a halt with two types of destinations – Heaven and Hell. Wise Muavono Balawa, Lautoka