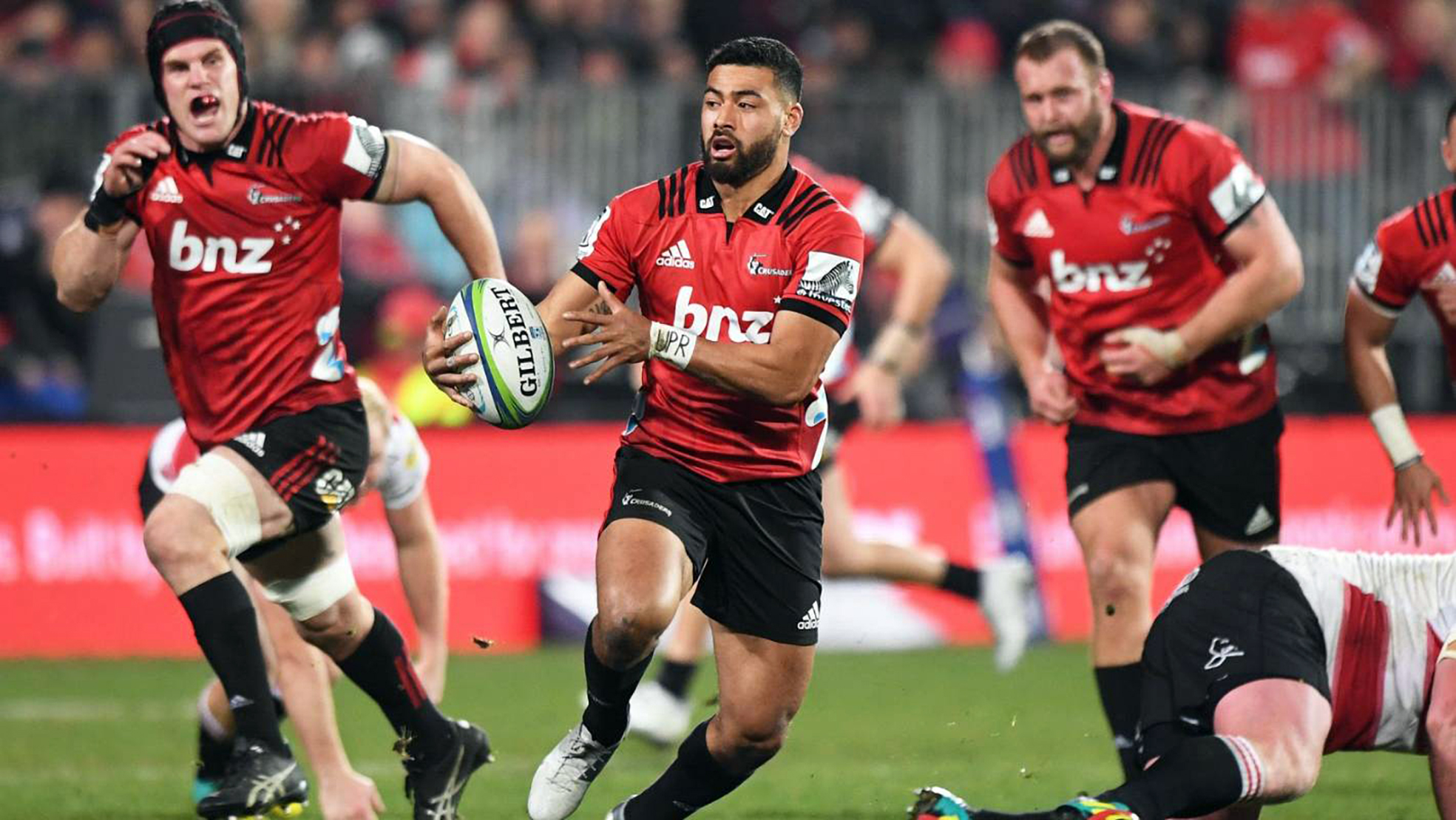 THE Super Rugby clash is once again here. The BNZ Crusaders have a commanding lead in both the NZ conference and overall standings and come into the match as hot favourites. The Gallagher Chiefs come in as the host and are currently struggling to win a spot in the top eight playoffs with a bag full of mixed results this year. Interestingly, the All Blacks coaching job will be vacant by the end of the Tokyo Rugby World Cup and Crusaders mentor Scotty Robinson is in hot prospect to claim the post should the Crusaders win a treble Super Rugby title. A win on Saturday for the Crusaders will almost cement them as minor premiers on the table and secure them a home playoff. It is also an opportune time for Sevuloni Reece and few other rookies to cement their ABs position for the WC. All the best and may the best red team win. Vinaka, joka na qito. SHALWYN PRASAD Nabua, Suva

WHAT can be said but that we’ve basically become the product of our own doing. Sickness is now occurring more often where it should not be. We have basically become what we eat and drink. It’s about time Government takes serious steps towards limiting unhealthy food and beverage consumption for our children. From school canteens to retail stores as well as advertising and marketing, as they encourage a pattern of consumption that causes obesity and leads to non-communicable diseases. About 5200 Fijian lives are shortened every year because of sickness and it all boils down to what we eat and drink from an early age. Evidence from research carried out over the past thirty years has demonstrated that the environment during early life influences an individual’s risk of developing NCDs, from before conception through fetal life, infancy, childhood, adolescence, adulthood and into older age. Tackling the issue at the source is the only way to approach this epidemic in order to prevent early stages effects on later disease risk which potentially can become substantial. Government needs to take action. People need to take action. SIMON HAZELMAN Rava Estate, Savusavu

IT’S so unfortunate when cost of living has and continues to soar endlessly and that too to an unprecedented level, life is becoming difficult every day. I believe Energy Fiji Ltd’s proposal if considered, could be really catastrophic. Catastrophic in the sense electricity is the unavoidable source to running a business and as soon as it’s implemented, the eccentric impact will be from all sides. There will be a rise of prices of everything. In essence, one has to wonder what percentage will filter to overhaul cost of living. The idea of shelving for a later sunny day would be more appropriate. Already the cost of living is unbearable and any increase anywhere will only make things worse. My input would be let’s look at the greater good of people because many people would be economically affected. SANJAY KUMAR Suva

YESTERDAY afternoon I had to stop at the junction of Vitogo Pde, Saumatua St and Kings Rd because of heavy traffic. Near Anupam Theatre, I wanted to turn into Kings Rd. Suddenly a voice said (on the driver’s side), “Boso, you got aaaaaa…” At the same time I looked left and sure enough there were two boys peering into the car. The windows were up. I heard, “E lala tu.” (there’s nothing here). I distinctly heard the sound of the back door handle being opened but I always lock the doors when I am driving. The boys quickly gathered on the sidewalk and I asked, “Dua na ka dou vinakata?” (You guys want something). The guy who had come to my side said, “Sega set.” This is a warning to drivers — always lock your car doors with windows up if you are driving alone, you could be the target of a robbery on the road especially when you have to stop at a busy junction. If you have handbags, computers or valuable stuff, put them on the front seat or on the floor out of sight or even better, in the boot. Don’t take chances, they are out there devising new styles of robbery and they work in a group. Be careful at traffic lights, one of my mates lost a good mobile phone when he stopped at a crossroads in Lautoka, when someone snatched it away from his hand, yes, he was on the phone. Police, hope you are reading this, the boys are stationed there at that junction. ALLEN LOCKINGTON Waiyavi, Lautoka

READING Rakoko’s classic literary piece titled “Enjoy rugby 7s last event in Paris” (FT 30/05) brought smiles and made my day. Rakoko mentioned that our boys shared blood, sweat and tears on the sand hills and during training sessions and this paid off when our boys found their feet on day two at Twickenham. The boys had promised to win for the late Nimilote Dau and they did it in style with that thrilling 43-7 win. Furthermore, Tuimaba was spotted with blood but this did not deter our rookie nominee from scoring some fantastic tries. Fiji is in an unfriendly territory where our boys have yet to taste victory since the inception of the WRSS (World Rugby Sevens Series) and if one looks at our pool matches then I bet more effort is needed on day one. Unlike London, in Paris our boys face a stern test as they are up against Ireland, Argentina and England and will be expected to burn out heaps of energy in order to counter the underdogs. Tuimaba, Derenalagi and Botitu have been nominated for the 7s rookie award and I hope that this nomination will motivate our future stars to deliver another blockbuster performance and fulfil the promise made to a rugby crazy nation –– winning the 2018/19 WRSS title! RAJNESH ISHWAR LINGAM Nadawa, Nasinu

FIJI will kick off their campaign against England followed by Argentina and Ireland knowing very well that victory in Paris will mean the Olympics champions will be crowned the overall series champions. Barring upsets, Fiji will face France in the first cup quarter-final. Victory over France will book us a semi-final date with championship rivals USA provided USA is able to overcome either Australia or South Africa (depending on who finishes second in the pool) in the their quarter-final match. Victory over USA in the semi-final will guarantee us the series title however, should we lose, our only hope will be for someone to topple USA in the final and for us to win the third place playoff which will leave both Fiji and USA with 181 points. If USA wins the Paris title, they will win the overall series title and if USA loses the final and Fiji wins bronze medal, the series winner will be decided on point’s difference. All in all, it will be a huge task this weekend especially knowing the fact that we have never ever won on two consecutive weekends. The challenge will be massive but I am sure the boys will not repeat the mistakes of last year when we only managed to finish fifth in Paris and handed over the crown to South Africa. Go Baber, go. SHAD ALFAZ ALI

SAVUSAVU is surrounded with water and our youngsters are very familiar and comfortable in it as they spend lots of their time playing in water. While we have a sailing program that is producing some of the best sailors in Fiji, the investment of a swimming pool facility here will definitely produce great swimmers as well. A six-lane pool will do Savusavu a great deal. It’s a smart investment in an area where it matters the most! SIMON HAZELMAN Rava Estate, Savusavu

THE fashion industry in Fiji had been unheard of until recent developments. Its growth has opened opportunities for individuals who have an interest in clothes, looks and creativity. I have encountered difficulties in relating the designed clothes and the occasion on which they can be worn. When models strut the designs, the design and the designer’s names are given. What about the occasion? MOHAMMED IMRAZ JANIF Natabua, Lautoka

THE TV news on Wednesday showing the Minister for Economy Aiyaz Sayed-Khaiyum explaining how the government budget works reminded me of my economics professor strutting his stuff on the lecture floor. EMOSI BALEI Suva

I BELIEVE there are two types, those who are there to serve the people and those serving themselves. Towards the end the people always find out. DAN URAI Lautoka

WHAT a cosmopolitan world. The Europa cup final was played between two English Premier League teams, but amazingly of the two run-on teams, only one Englishman was playing. One more joined as a substitute in the second half. Soccer was formalised of sorts by the English in the 1600s but is recorded as being played in a different format 2000 years back in China and Asia. It could be said that soccer was one of those games the English invented but have been eclipsed in ability by other countries. There is no doubt the English “invented” rugby in the 1800s, exported it mainly to former British colonies where it has flourished. In its various formats one particular former colony picked up the ball and ran with it producing many of the world’s best players. That country is of course Fiji and we do not need any foreign players to assist. ALLAN LOOSLEY Tavua