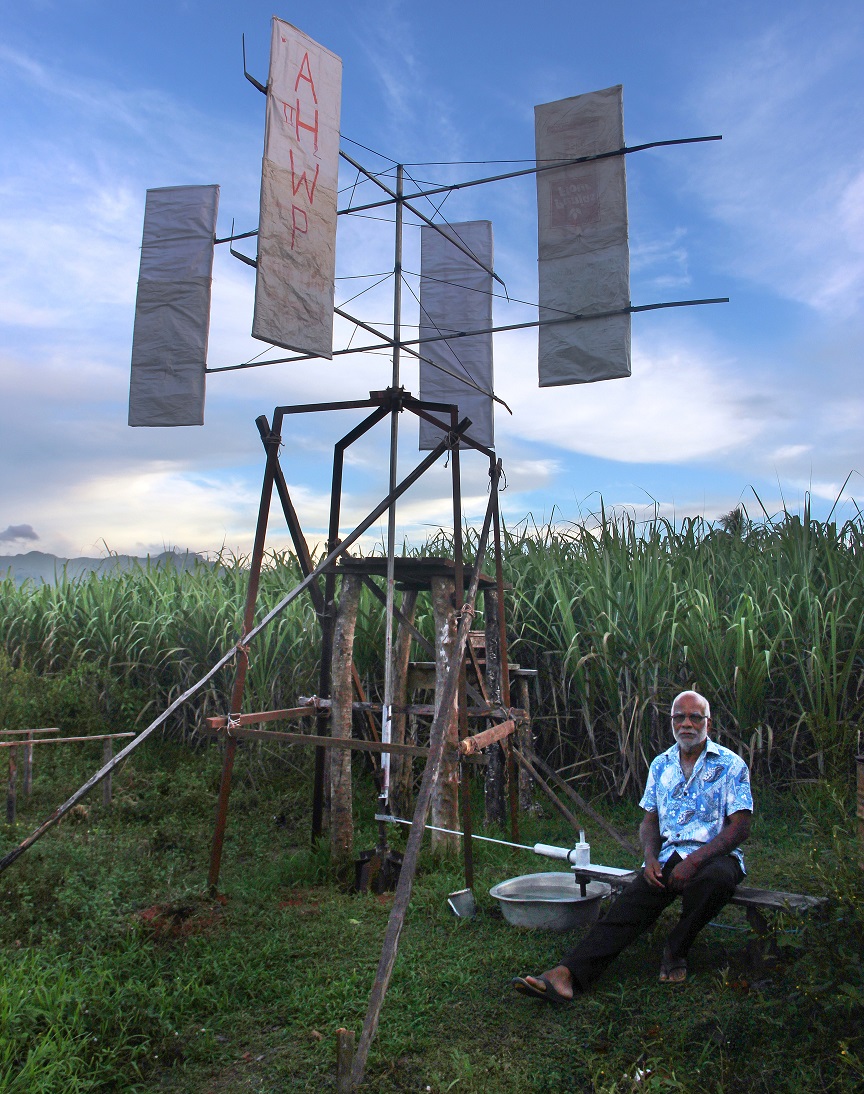 IT was wonderful to read of the invention of a water/wind-powered turbine by a daughter-father team. This is a remarkable example of innovation and putting one’s knowledge and skills to practical application. Since everyone is now shouting from the rooftops about climate change, reducing emissions by embracing renewable energy, increasing resilience and indeed promoting greater awareness and participation, especially by women and youths in science and technology, I await with abated breath what the Government, civil society, business sector and the development partners can do to nurture such enterprises. I believe many people qualified for generous grants under SME schemes, rural electrification, dealing with impacts of climate change and disaster before the election. I wonder if some money from the Environment and Climate Adaptation Levy and large funding from donors, can be diverted to such individuals who show such ingenuity in trying to make real impacts. MELVIN CHAND Suva

TAXPAYERS who deliberately misrepresent the true state of their affairs to Fiji Revenue and Customs Service by reducing their tax liability including dishonest tax reporting, such as declaring less income, profits and gains than the amounts actually earned, and overstating deductions, should not only be ashamed of themselves but when caught, need to serve long jail terms. Minister for Economy Aiyaz Sayed-Khaiyum’s statement that Government plans to up its game on those evading taxes or cheating the State coffers (FT 29/05), is not only proper but government needs to ensure that we have tax laws that cannot be taken advantage of. We also need to ensure that we have a system in place that cannot encourage corruption by tax officials. As a developing country, tax is a vital source of government revenue. Tax evasion and corrupt practices has an ambiguous effect on the growth of our economy and it basically reduces the amount of public services supplied by Government, which leads to negative consequences for growth. Anyone found guilty of tax avoidance and tax evasion needs to see the inside of our prison walls and for a long time! SIMON HAZELMAN Savusavu

IT is a known fact that fast food restaurants and other food outlets do not give a hoot how much salt they add into cooking takeaway foods including the amount of sugar they use as ingredients for their many pastries and cakes. I believe the fizzy drinks sold throughout our supermarkets are misleading in as far as the amount of sugar content in them is concerned with its empty bottles seen everywhere that litter our drains, roadsides and environment. Locally, ready made snacks sold in our supermarkets are also culprits in the production of these very tempting snacks, our Chinese, iTaukei and Indian restaurants include sugar and too much salt as an ingredient in cooking their dishes where many of their unsuspecting customers are not aware of. I would like to ask the authorities concerned and our government departments such as the Ministry of Health and FCCC to please try and get these companies to comply and assist make Fiji a very health conscious country. Majority of Fijians throughout the country are innocent and it is a wonder our health facilities and health centres throughout the country are always packed with very sick Fijians 24/7 and I believe these food outlets are partially responsible for all these. We still have many of our outdated diesel public buses here in the West that spew out lava or carbon monoxide as if it is no bodies business but I believe nobody seems to care and it is very annoying. These black emissions are inhaled by Fijians, it sticks on to our school children’s uniforms and is very bad for our health, can these authorities take the necessary measures to rectify please. TUKAI LAGONILAKEBA Namaka, Nadi

POLICE and army officers, if I am not wrong, have been subjected to fitness tests in order to ensure that they can adequately carry out their duties. My condolences to the families of those officers who have passed on because of ill health and some during the tests. Anyway, I am longing to see the day when teachers will also be subjected to some form of fitness test, certainly not as rigorous as those for the lawmen. Recently, I saw a teacher who could barely walk properly, had earphones on and a plate of food, struggling to climb the stairs to the classroom. Now that this letter has seen daylight, I’d like to ask “whom it may concern” about the rules governing teachers’ internet surfing times and social media engagement. Are teachers allowed to have earphones plugged to their ears during teaching in the classroom? I was told by someone that teachers are allowed to
check their email on their mobile devices, even during teaching hours. I asked that “someone”, “who sends emails to teachers every ten to fifteen minutes?”. Silence followed. I added, “under the guise of checking emails, many teachers are actively on social media throughout the day”. The good teachers out there, please ignore this letter if you are physically fit and also don’t FB during school hours. I guess the above are very tough questions so I will be all right if no answer comes. DONALD SINGH
Lautoka

Mentor in the team

I CONGRATULATE our 7s team for the excellent win in London. Some time ago I had written that the team needed an elderly person to boost morale and keep the discipline. I saw him praying with the team after the win. I received a text that Tomasi Cama was in the team and could be the moulding factor to do just that, especially when he is a former 7s player and champion at that. I believe in the past our teams always had an elderly person who mentored the boys. Vinaka va levu Tomasi Cama, keep up the good work. ILIESA BARAVILALA Natabua, Lautoka

THE Jazzman is banking on the six survivors (Josua, Paula, Naduva, Sevu, Jerry and Nacuqu) from last year’s bitter loss at the hands of England in the cup quarters (19-17) to steer our ship in Paris and capture the 7s crown from the USA Eagles who have created history by appearing in nine semi-finals. Last year’s loss has been a learning curve for our boys and out of the five titles won last year, our boys defended the Hamilton, Hong Kong and London 7s titles while we narrowly lost the Singapore 7s title and Vancouver 7s title to the Blitzboks. If Fiji wins the Paris 7s, we will equal the record set by last year’s team. Despite being in a tough pool, Fiji is capable of winning the title that has evaded us since inception. The All Blacks 7s won in 2000 and 2004 while the hosts won in 2005. Samoa managed to win in 2016 while the Blitzboks has had most success in France winning in 2006, 2017 and 2018. Nasilasila believes that our strength lies in our unity and teamwork and this should set the platform for a victory on Monday. Compared with Fiji’s pool, our rivals will face Canada, Samoa and Spain and should have a walk in the park to reach the cup quarters while Fiji will face England, Ireland and Argentina. Thus, the win in London is water under the bridge and the boys need to regroup and iron out weaknesses from the epic London win! RAJNESH ISHWAR LINGAM Nadawa, Nasinu

We did it in London

I AM so happy that we retained the London 7s title and topped the points table. It was gratifying to note that as per my earlier letter, when we secured the ball at kick-offs, we scored. Then instead of kicking ahead and losing the ball, there was a kick across the field to a team member who went and scored. What a delight. Still we haven’t got a kicker for the conversions. The game is getting tougher and every point counts. Our off-loads continue to be a source of such delight that it has been noticed that other teams are trying to emulate this as well. Praying that we keep up the momentum to erase the bad memory of last year and bring home the trophy! Go Fiji, go!  NORMAN YEE, Martintar, Nadi

A THUMPING majority for his party and back to the drawing board for his opponents. DAN URAI Lautoka

DAYS after making headlines, Roy Krishna has announced that he is departing Phoenix, the club that gave him so much fame and popularity. It is believed that Krishna is heading towards greener pastures in Korea. I believe Krishna’s departure will have an impact on the performance of the Phoenix team as the goal-scoring hero will be dearly missed. As I wait for Krishna to announce his club, I wish our wonder boy all the best! RAJNESH ISHWAR LINGAM Nadawa, Nasinu

A CARETAKER is defined as “a person that is employed to look after a building”. With reference to the Fijian Competition and Consumer Commission fining a caretaker $1000 for displaying an advertisement that was discriminatory in nature under Section 26 (3)(a) of the Constitution; wouldn’t the caretaker be merely acting out the instructions of the landlord? Shouldn’t the landlord be held accountable instead of the caretaker? TALEI DRISO Suva

THIS year is proving to be one where milestone marks of existence are being celebrated. First it was Jack’s of Fiji (50 years). Now it is Hilton Hotels and Resorts (100 years). Next should be someone with 150 years. I wonder who. MOHAMMED IMRAZ JANIF Natabua, Lautoka

UPON thorough check with two TV stations, it is now confirmed that neither of the two will be airing live telecast of the Cricket World Cup. Every four years we fans wait in much anticipation to watch our favourite teams play but sadly that’s not to be. Can the Minister for Youth and Sports please intervene in this matter. ELIZABETH SINGH Nausori

WE have won four tournaments, have created history by winning in Hong Kong five times in a row, we have eight rookies in our current squad creating mana magic in the series, we have only one surviving Olympian playing and above all, Fiji is the only country in the top five that does not have a home tournament to host. This is Fiji creating a wave of histories in 7s and one last big effort in Paris will make 2019 very special. The famous song from legendary singer the late Elvis Presley It’s now or never, yes, this is it, show them to them the way Fiji should be. Joka na noda cauravou, toso Viti.