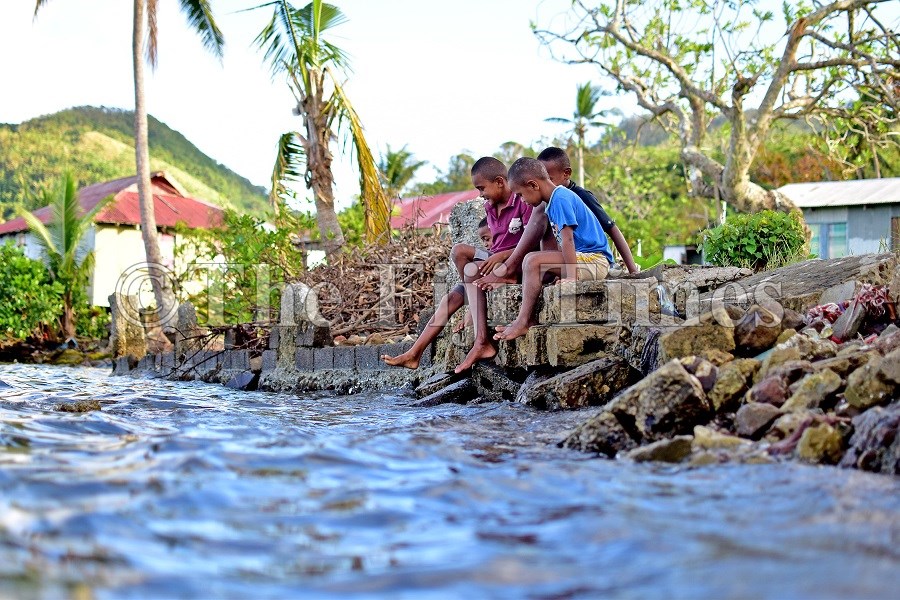 Children of Levuka Village on Kadavu watch the tide slowly creep into their village. They are sitting on what used to be the foundation of homes. Picture: JOVESA NAISUA

Climate change is a sad reality faced by many Pacific Islanders and this was highlighted aptly in The Fiji Times yesterday which ran a story on the villagers of Levuka in Nabukelevu on Kadavu who are suffering from the impact of climate change. The rise in sea level because of climate change has become a problem for these villagers as seawater and tidal waves continue to inundate homes leaving many villagers with no option but to relocate. It was also sad to note that families had started to relocate because living in the area was no longer possible. Becuase of COVID-19, the fight against climate change has sort of being left aside as more efforts are committed to revitalising our economy. Climate change will become a nemesis for many Pacific Islanders but for now it’s time to address COVID-19. RAJNESH ISHWAR LINGAM, Nadawa, Nasinu

IN his two opinions, (FT 16/5; FT 23/5), Prof Wadan Narsey poses the pertinent elephant in the room questions. He asks where were the supporters when their elected governments were removed from office in 1987, 2000 and 2006. We all know that nobody would dare to stand up against the armed regime that was in control. With reference to his observation about corporate friends and morning walk buddies ditching their loyalties only to jump on the other bandwagon, I can only say they can change colours faster than the chameleon. And these shameless opportunists will not hesitate to jump ship again. For they have sold their conscience. SELWA NANDAN Lautoka

If there is a photograph that spells concern, it is the one of Lynda Tabuya and Tanya Waqanika (FT 25/05) taken during one of two simultaneous SODELPA management meetings held last Saturday. Lynda, in her usual stylish SODELPA outfit, conversing with Tanya both with a stern look says it all! SODELPA is in disarray, not only with the split of its leaders, but with its followers as well. Obviously there are one or two elephants in the party who needs to go in order for everything to flow. SODELPA is in a very challenging situation and no one seems to be brave enough to say it as it is. Someone needs to man up and highlight the problem. The solution, I presume, is “out with the old and in with the young”! Simon Hazelman Rava Estate, Savusavu

Our gracious thanks to Sir Gordon Tietjens for all he has done in sevens rugby and he remains the most successful sevens coach in the game. He has been there and done it and the only trophy missing in his cabinet is the Olympics gold. I believe this is the prime reason he returned to coaching after his most successful tenure with NZ and started guiding Samoa to the road to Japan. However, we all should learn a very valuable lesson from our own Ratu Peni Rayani who, after lifting the Olympics gold with Fiji, has in the past four years not coached any other tier 1 team. His mentor and reading of the game is perfect and I do believe he has mentioned he cannot repeat the feat with any other team apart from Fiji. His passion for Viti rugby is still living and breathing and after achieving the success at the highest level, it was a clear decision for him that he may not do it with another team. Clever thinking from the Ratu joka dina! Once again Sir Gordon thank you for the many victories and wins and success and we wish you well. Joka dina Gordon and even more joka Ratu Ben as we can see now why you continue to only live and breathe Viti rugby. Kerekere, can we start the veilomani and talanoa now as plan B on the road to Japan when it happens? Talanoa, talanoa and stop the tanoa. Toso Viti … joka dina. Shalwyn Prasad Mukta Ben Place, Nabua, Suva

I am seeing children from the nearby village and neighbouring houses roaming the streets, walking through long grass and playing in open drains; most of whom are barefooted. I spoke to one mother and her teenage son about leptospirosis. Both were unaware of the risks of this killer disease yet they raise a pig just metres from their living area. This disease could quite easily be lurking in our suburbs where pigs are raised and slaughtered and dogs wander around the streets in large packs. These animals, along with mice and rats, are responsible for spreading the disease. A vaccination is available for pigs and dogs. Responsible dog owners who get their pets vaccinated annually would know that when they do this, it is protecting them from leptospirosis, among other diseases. It is a zoonotic disease (where transmission occurs from animal to human) and a social problem. There needs to be greater awareness of leptospirosis
along with a mass swine and canine vaccination campaign by the Ministries of Agriculture and Health
with local council and corporate support. So far, there have been 11 fatalities from leptospirosis; 11 lives which could have been saved with knowledge and preventative measures. It’s time to be proactive; not
wait to be reactive. JULIE SUTHERLAND, Suva.

I applaud The Fiji Times (23/04/20) for telling us a beautiful story on one of our great iTaukei songwriters, lovingly known as Percy Bucknell. This gentleman is remembered for some of his most famous iTaukei songs which he composed during his sailing days in the 1930s while on that renowned inter-island vessel Adi Keva which sailed between Viti Levu and Vanua Levu. In one of his songs, Veivanua Au Dau Sokota Voli, Bucknell speaks lovingly about Labasa and its various centres which were just beginning to see the light of development and were favourite hangouts for visitors such as himself and Vulovi, Vorovoro, Malau and Vuo and their many “roses”. It’s also said that Percy Bucknell had a gift that only a selected few in the world possessed. This was the ability to immortalise people and places in his songs: Vorovoro Malau Kei Vuo, Kele mai na Adi Keva, Veivanua Au Dau Sokota Voli, Na Bu Ko Drau A Solia, Biu Ko Suva Ni Kua and Isa Na Yakavi Ni Siganisucu. Though Percy Bucknell has passed on, his outstanding lyrics and music lingers on. Fred Taylor Nepani, Nasinu

It is a sad reality that more than 400 cabin crew at Fiji Airways have been terminated along with a few hundred staff members. Well, where are the fact of the matter and the reality of the matter of 10 years of unprecedented economic growth? Was this so called 10 years of unprecedented economic growth unable to sustain these employees with at least reduced hours or even ample notice ahead of termination? With the marketing slogan used by Fiji Airways — Sota tale — stating “it’s not goodbye, it’s see you later”; but with the termination of these employees, I believe it doesn’t even mean to see these employees back with Fiji Airways later. AVINESH VERE Lautoka

All resorts are shut down. No tourist “arrivals” for no flights. Now Fiji Airways has made more than 700 staff members redundant, including flight attendants. Ergo, there will be no flights in the near future at least. Therefore no … ummm … tourist “arrivals”. All this because of the COVID-19, I suppose; which has wrought havoc with the finances of the entire tourism industry and all those institutions directly or indirectly related to … hmmm … tourist “arrivals”. The question is, if the entire tourism industry is in a permanent lockdown, so to speak, do we need a Ministry of Tourism and all other statutory organisations with their fancy titles and perks attached to it? If all were to also go … hehe… temporarily permanent lockdown. Imagine the moolah saved. Can come plenty handy now-a-days eh Pintu? What of all the aircraft “purchased”? The repayments? Hey, hey, fair questions. Looks like it will all be “heart and soul” travels in the future I foresee. Uto ni Yalo eh? No more waqavuka. When was the last time you used your flying boat uncle? So much of eight years of profit. MANOJ LAL PATEL Drasa Avenue, Lautoka

It is so good for the Government to give out loans to the people to start or restart stopped business. I just have one question. Do the people have the money to support these new businesses? I hope it is not like the taxi business where there are too many taxis and very little customers. Don’t get discouraged when the Government is helping, just give it a go. Sukha Singh Labasa

Some time ago the Government was taking loans for its operational budget, now the same Government will be giving loans to some people who want to start new businesses. Interesting times! John Brown Drasa Vitogo, Lautoka

I believe it’s a sign of things to come for as long as there is no end to the COVID-19 tunnel as jobs are lost and ability to obtain food disappears. Dan Urai Lautoka

How are the last people undergoing observation for the coronavirus? Are they well? Update please. Allen Lockington Kava Place, Lautoka

THE only appealing thing I saw in The Fiji Times coverage of the internal power struggle in SODELPA (FT 24/5) was the SODELPA-emblazoned shirt worn by acting president Ratu Naiqama Lalabalavu. Notwithstanding a party official’s boast “SODELPA here to win”, you don’t get a sense that this party in its fractured form is a government in waiting. I suspect the wait is going to be a long one. Rajend Naidu Sydney, Australia