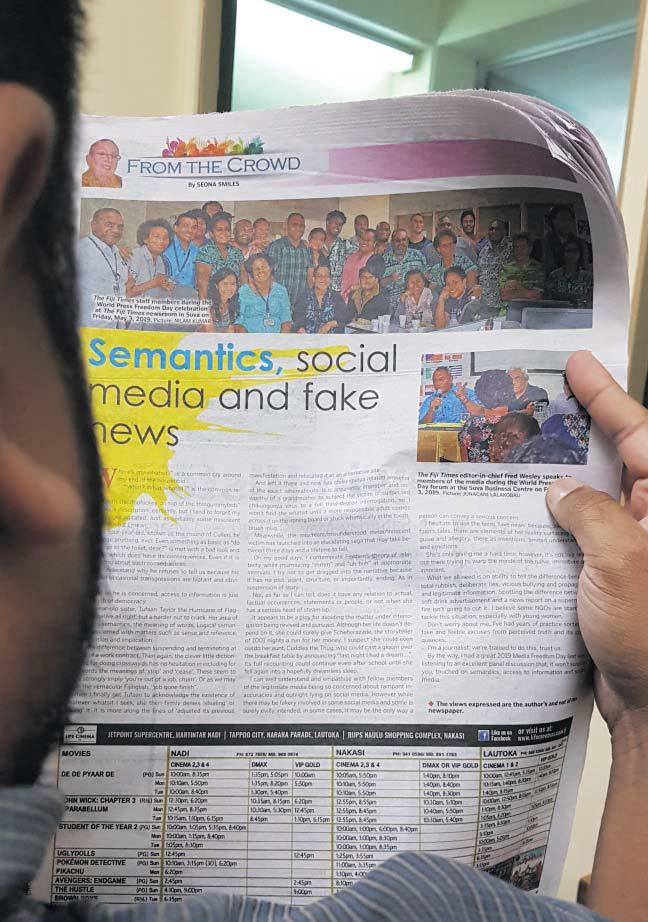 A letter writer has commended the use of local pictures to go with Seona Smiles’ From the Crowd column. Picture: FT FILE

At last we have gone local in From the Crowd (ST 19/5). I am not referring to Seona Smiles who has been around long enough to be thoroughly local, but to the illustrations that accompany her articles. I hope The Sunday Times will continue to find local pictures to accompany her excellent articles. With her long career in media and her grandparenting experience, her articles are thought-provoking, amusing and very topical for us Fiji readers, and I express our gratitude to The Sunday Times and to Seona for the hours of work put in to provide what is usually the best “read” of the week. TESSA MACKENZIE Suva

Dan Urai is absolutely correct in stating that the ruling party in FijiFirst will make a good opposition party (FT 20/05). No doubt they would make a great opposition and that’s a matter of fact! The issue here Dan is that it is obvious that the opposition party can hardly handle themselves, not only as a party, but they continue to put off potential voters by constantly criticising the ruling party rather than contributing to the country’s development. The very thought of them as the ruling party is not only scary but it’s something the majority don’t even want to think about. The opposition’s showing in the 2018 election, while it has bolstered its optimism about its prospects in 2022, has tremendous work to do to be considered worthy. Also, any dissatisfaction with governments’ performance doesn’t necessarily translate into perceptions that the opposition could do a better job. The opposition party does not have the ability to solve many of the problems the ruling party is facing. So in retrospect, it is rather difficult for the opposition party to be seen as a credible contender to rule the nation. That leaves Fiji’s moving forward as having FijiFirst as the one and only worthy party! Simon Hazelman Rava Estate, Savusavu

As the Ministry of Finance officials prepare our 2019/2020 budget report, I pray that they will heed wise advice from Marcus Tullius Cicero. “The budget should be balanced, the treasury should be refilled, public debt should be reduced, the arrogance of officialdom should be tempered and controlled, and the assistance to foreign lands should be curtailed, lest Rome become bankrupt. People must again learn to work instead of living on public assistance.” — Cicero, 55 BC. Cicero was a Roman statesman, orator, lawyer and philosopher of all times. Let us make a difference and learn from history. Korina Waibuta Knollys St, Suva

Following the carrot dangling of free shares in EFL, the expected fall of the stick has occurred. And what a stick! A price rise could have been expected, but why a whacking 17 per cent all at once rather than a smaller increment over, say, the past four years. Naturally I believe “the average Fijian” is not only going to pay his/her increment, but the increment for just about every commercial business in Fiji. Of course the price gougers will have a field day, are any of the consumer “watchdogs” going to keep track on the price hikes? One could go on but what did the Reserve Bank say about inflation this year? Were they kept in the dark? Allan Loosley Tavua

Sugar was once known as the backbone of Fiji’s economy. I don’t have any data related to the decline in sugar production as stated by the Opposition. I don’t have any data related to the increase in sugar production as shared by the Government. I have seen acres of idle land which were once decorated with green sugarcane plants. I have seen housing and industrial development on what were once cane farms. I have not seen a single sugarcane plant growing in water or air. There definitely has to be a decline in sugar production. Mohammed Imraz Janif Natabua, Lautoka

Speaking on the catastrophic impact of climate change UN Secretary-General Antonio Guterres said “the Pacific has a unique moral authority to speak out” and that “the world has to listen” (FT 19/5). Several years ago I saw on SBS television an ordinary elderly woman from Tuvalu say they have been saying it loud and clear on the basis of their lived experienced that rising sea level was posing a very real threat to their existence but people who should be listening appeared to be deaf! Let’s hope the world will listen with greater attention following the UN man’s visit to the frontline of climate change. More importantly, let’s
hope they act now to undertake the necessary changes to deal with human activity induced climate change impacts on planet Earth. RAJEND NAIDU, Chiang Mai, Thailand

I hope that Gareth Baber will arrive on time to guide our 7s team in London. Although our boys have been training under the watchful eyes of assistant coach Kane Jury, I believe that Baber has a more resounding impact on the team’s preparation. Expectation from fans is definitely going to be high as Fiji has a good chance of getting its grip on the overall WRSS (World Rugby Sevens Series) title although the USA Eagles will march in as favourites with the inclusion of Baker, Barrett and Iosefo. The Marriott London 7s has been won by the All Blacks most but their last win was in 2014 and since 2015 the USA Eagles, Scotland and Fiji have won the cup title. Last year in a thrilling encounter Tuisova and Radradra helped the South Sea Islanders overcome the Blitzboks 21-17 but this year we will be playing without the dynamic duo. Fiji is scheduled to play France, Kenya and Samoa — three unpredictable teams and areas of concern for me are taking conversions, winning possession from restarts, our discipline and contest at breakdown. If we can address these areas I’m sure that we will laugh the loudest after the London 7s concludes! Rajnesh Ishwar Lingam Nadawa, Nasinu

The work on the new police station in Nadi has already begun. The old building is being dismantled to allow for the new three-storey building to come up at the same location. As a fast-growing town and a popular tourist destination, Nadi deserves buildings and structures that are of modern look and standard. I am sure the people of the jet set town would be very pleased with the present government’s initiative to construct the new police station. With the Government’s help and vision, both Nadi Town and Namaka got new markets. The local government must also keep the same pace in upgrading and adding the needed amenities. The councils are also duty bound to ensure their towns are kept clean at all times. Our council should pay special attention to the drains in the town. I think the district administration and the council should also make an effort to clean the surrounding of the government station. It’s not as good as it is now. The market, bus station and government station to name a few, are those places that are heavily congregated by hundreds of people including the tourists on a daily basis. Even, if we can’t paint the buildings, at least try to keep the area neat and tidy all the time. I thought I would let the authorities know of my concern so that they can act on it. Please do the right thing so people praise you. Thank you. Suresh Chand Nadi

The Fiji Times provides refreshing games for our brains daily. It is in the form of Which Word, Focus, Sudoku puzzle, Crossword puzzle and Attemptation. They sharpen our thinking skills, build knowledge and can improve memory. Mohammed Imraz Janif Natabua, Lautoka

I believe it plays an important role in every worker’s life. Pick the right political party if you want secure and decent paying jobs. Dan Urai Lautoka

The revelation by University of Fiji acting vice-chancellor Prof Subramani at the Fiji National Hindu Conference in the Capital City that youths were losing touch with life’s realities must be taken seriously. He also stressed that youths were not participating actively in our community and that these youths had started to distance themselves in an alarming way. Food for thought, indeed! Rajnesh Ishwar Lingam Nadawa, Nasinu

Mohammed Imaz Janif (Letters 11/5) praises your cartoonist and who am I to demur? Nevertheless, his depiction (10/5) of two Irishmen in connection with lucky Nasomosomo villagers left something to be desired on two counts: garb more Tyrolean than Irish and magic mushrooms amid the shamrock. I hope I won’t be thought humourless for saying so. Christopher Griffin Perth, Australia

I believe a shortage in Australia will provide opportunities for Fijians and is a drawback for our children. Dan Urai Lautoka

As voting in one of India’s most acrimonious elections in years came to an end, millions of people are eagerly awaiting the result. Amidst heavy security in some parts, Indians voted. While PM Modi is hopeful of forming a majority, his party’s overall majority looks to be at risk. Interesting times, aye! Rajnesh Ishwar Lingam Nadawa, Nasinu