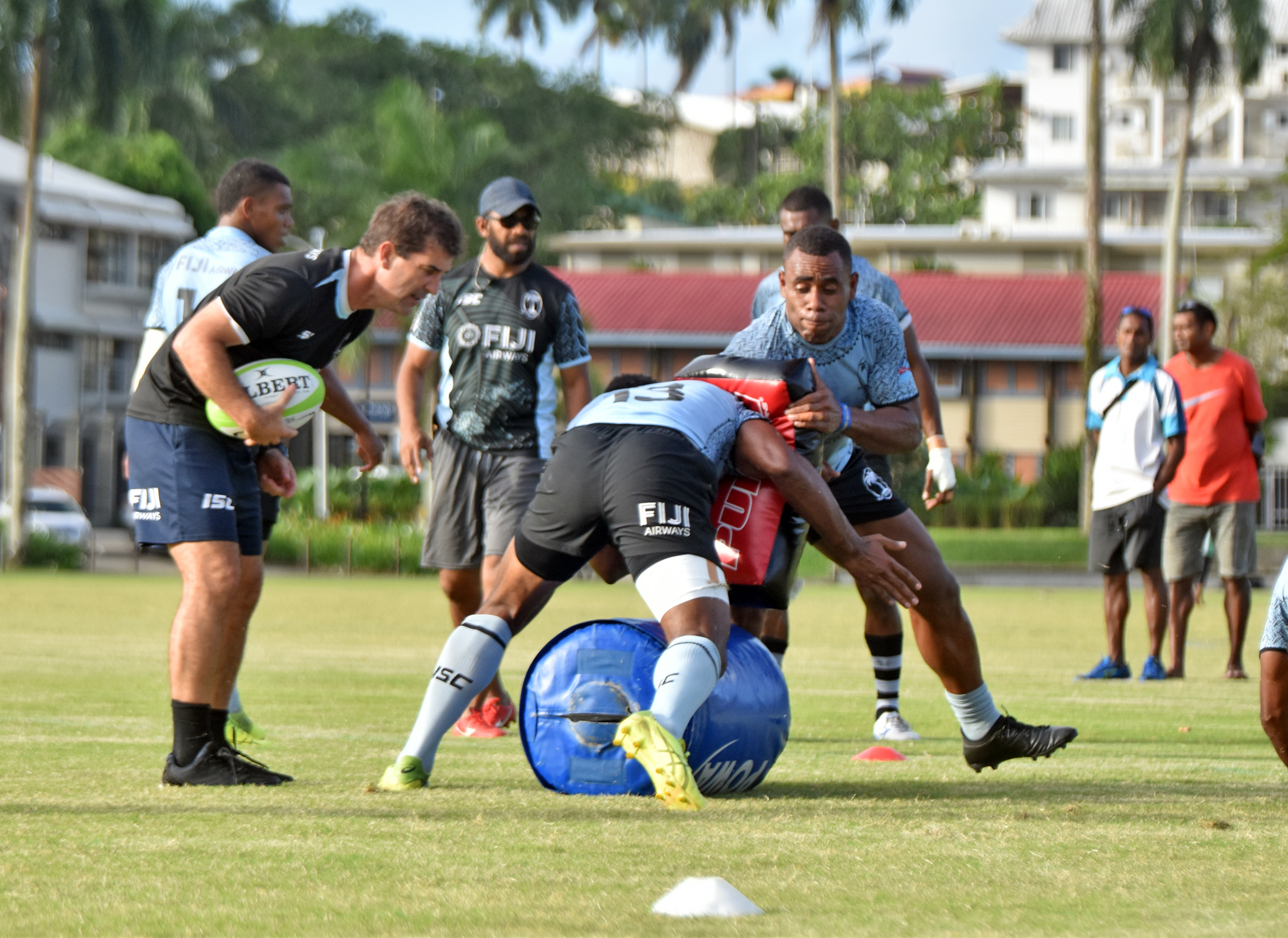 Fiji Airways Fiji sevens head coach Gareth Baber keeps a close eye on Livai Ikanikoda and other players during their training session at Albert Park in Suva on Wednesday, May 08, 2019. Picture: JONACANI LALAKOBAU

Days away from the crucial European leg of the HSBC World Sevens Series, Paula Dranisinukula has acknowledged that the off-load game of the Fiji team is destructive which tears the defensive lines of oppositions. But, let’s not be mistaken about it. Other teams are catching up. It is especially so after the referees have started to crack down on high tackles. Players are getting cautious about going high which frees the ball and hands. I think the Fiji team has to work hard on dismantling and shutting the off-loading game of its opposition. Defence is many times the difference between winning and losing. I have also observed that South African players are pulling the players to the ground instead of driving them back. The ball carrier easily goes to ground and a turnover could be won. Possession in sevens is ever so important. I hope our old nemesis, disciplinary problems, does not appear during the final leg. Mohammed Imraz Janif Natabua, Lautoka

The four million trees in four years program needs as much support as possible in order for it to be successful. It equates to planting approximately 2740 trees per day with the presumption that all of it will grow. Planting it is the easy part. It’s maintaining the growth of the trees where the challenge will be! An enormous task indeed! Simon Hazelman Rava Estate, Savusavu

End of an era

The European football season is coming to an end and so are many great careers. It will be farewell to many of the best in the most watched sport in the world. Former Barcelona and Man City midfielder, legendary Yaya Toure will bring his career to an end. Part of the best teams of his generation, he will always be remembered as one of the best. Another former Barcelona legend Xavi will retire in the coming days and what a journey he’s had. Former Arsenal captain and Man United great Robin van Persie will be another big name leaving the priceless sport. Man United have been really poor this season since Ole Solskjaer was appointed their manager permanently and they lack leadership qualities. After spending a decade at Old Trafford, Antonio Valencia is leaving the club alongside the much passionate Ander Herrera. This suit will be followed by many more players and the board definitely need to make big budget signings in the summer transfer window. Anyways, congratulations to Manchester City on their Premier League title for the second year running. Despite the Liverpool challenge, they managed to pull out the battle. Best league in the world! Raynav Chand Nakasi

The recent “mini World Cup” soccer played at Churchill Park brought a lot of people to the Sugar City. A lot of vehicles were vandalised. Sadly, no police or may I say less police officers were seen on the streets that day. Can that be attributed to the police station being moved far away from town? Every time I read about more police recruits, may I ask where are the new recruits? John Brown Drasa Vitogo, Lautoka

Allowing me please, in my humble and layman’s view, the plan to plant 4,000,000 trees in four years (or 1460 days) is an extremely ambitious one. This equates to planting almost 2740 trees each day and every day, without fail. On a per capita basis, spread over each province, minus weekends and all 10 public holidays, will almost make such a target even more elusive. Food for thought for all our national planners, respectfully. Ronnie Chang Nadi

Finally after four years I get to watch Fiji One News after a couple of Walesi technicians came by to connect me up! I was told that the reason I now get connection is because a new tower was installed at Naveria here in Savusavu just recently. It sure explains the years of disconnection and brings to question why we weren’t told about it in the first place? Well, Fiji One News channel hasn’t changed except that a couple of the announcers have aged and the parliamentary channel is interesting in that the number of sign language interpreters seems to be as many as the number of parliamentarians! Let’s hope Walesi introduces some interesting channels! Appreciate the connection! Simon Hazelman Rava Estate, Savusavu

Congratulations to the Jack’s of Fiji-sponsored Nadi soccer team for winning their fourth Fiji FACT title. The green machine claimed the 2019 Vodafone Fiji FACT title after defeating Suva 2-1 in the final last Sunday which also happened to be Mother’s Day. Nadi last won the FACT title in 2016. This is the first time for Nadi to win a major soccer title at Churchill Park. What a tremendous outcome this has been for the Jetsetters who entered the tournament as underdogs. The entire management and team deserve commendation for defying all odds and achieving the best result for their diehard supporters and well-wishers wherever they may be. May I also take this opportunity to thank the unsung coach for guiding the team so ably? I am sure the beverages in Nadi must be sweeter after this memorable victory. Again, congratulations to all who have played any part in making this possible. Suresh Chand Nadi

Roy Krishna made this statement — “Growing up in a village, I never dreamt of this. If you work hard dreams do come true.” I believe that this message is an inspiration for every soccer player who is dreaming to make it big on the stage. Roy grew up in Siberia and played for All Saints Secondary School before donning the Babasiga Lions outfit and then making it into the national team. His skills and crafty style of playing was recognised by Wellington Phoenix and the Labasa lad played an instrumental role in helping the club gain prominence and in the process his performance in the 2018/19 season earned him the Johnny Warren medal for being the best player and also the golden boot award. Rumours are adrift that two Australian clubs are willing to pour up to a million to pursue Krishna’s magic. Indeed Roy has made Fiji proud and we must applaud his efforts regardless of his district. Roy has shown that we have the talent and skills — we only need discipline and the right mindset to feature on the big stage. Congratulations Roy and all the best in your future endeavours! Rajnesh Ishwar Lingam Nadawa, Nasinu

It is amazing that Fiji is relatively unknown when it comes to swimming as a sport. We are surrounded by the sea and rivers. We don’t have to travel miles and miles to reach the beach or a river. Yet, we have never managed to produce great swimming champions. Children and adults alike spend a lot of time in water. This time is spent playing, diving or yarning. We hardly swim. Mohammed Imraz Janif Natabua, Lautoka

From humble beginnings in Siberia, Labasa, to club and district football and then getting spotted by former Fiji coach Carlos Buzetti in the Under-17 playoffs to national duties and than finally to professional soccer with A-League teams. Achieving top honours in the golden boot award and the best player is truly the Roy in a full cup of joy. Vinaka Roy joka na qito soccer Viti kei na vuravura. My good friend Rajnesh Lingam a true Babasiga Lion will be proud to see Labasa getting bigger recognition. Go Labasa, go Fiji soccer, go Roy the joy. Shalwyn Prasad Mukta Ben Place, Nabua, Suva

You said it Terry, the 55 forced retirement thingy only worked when a mass retirement happened. OK, many graduates got employed (I am guessing) and now a few years down the road I bet the same amount of graduates are now biding their time, tapping their foot, or twiddling their thumbs and hope the retirement age will be lowered to 50 or even 45. Karike! Allen Lockington Kava Place, Waiyavi, Lautoka

I was at a friend’s house at Field 40 and Lautoka City Council workers were repairing the storm drains. To my surprise the workers first set a tarpaulin down, boiled tea and had breakfast for three hours before even starting work. This reminds me about the old PWD where before anything starts a billycan of grog was mixed then the work started later. John Brown Drasa Vitogo, Lautoka