Letters to the Editor – May 14 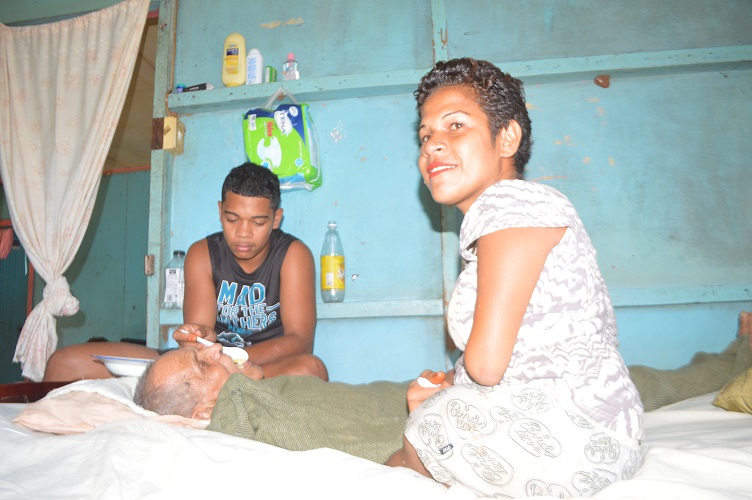 Angie Bradburgh looks after her dad Charlie who has been bedridden for the past few months. Picture: SERAFINA SILAITOGA

Angie’s love for her dad

Isa, my heart broke when I read the story of Angie Bradburg’s love for her dad (ST 13/05). She is a disabled single mother dedicated to caring for her bedridden father. She is quoted as saying, “Sometimes my monthly allowance from the Government is used to buy my dad’s diapers and wipes. “There are days I get sick because of my condition but God has been my strength and source of my joy. I make sure to always commit my life to Him every day before I take care of my dad.” She says that friends offer assistance. Angie, you are a strong and beautiful person. May God bless you and your dad and your child, I know that some more help is on its way to you. Thank you Serafina Silaitoga and The Fiji Times for the story. Allen Lockington, Kava Place, Waiyavi, Lautoka

THANK you The Fiji Times for bringing across inspiring stories such as Angie Bradburg’s struggles and will to survive despite her physical condition. Such a story should be told across the nation to motivate able bodied people who are now stuck and struck by the new epidemic freebies disease. People such as Angie deserve all the assistance from government in order for her to provide life and security to her family. I hope authorities will spare a hand from wannabe freebies expectant people and give it to this courageous lady who foregoes and forgets her Mother’s Day gifts just to give what all mothers are known for. Pure and unconditional love. Once again thank you The Fiji Times and more so to Angie Bradburg. Pita Soroaqali, Nadarivatu

Simon Hazelman’s view (FT 11/05) is open to debate. Giving nurses, teachers and all civil servants two to five-year contracts does not guarantee competency or productivity. Never forget one must first crawl before they can walk. Dan Urai, Lautoka

AFTER Ratu Filise gem Amenoni Nasilasila scored a beauty against New Zealand in Singapore, commentator Karl Tenana described him as one of the “hottest players” for Fiji. Nasilasila later scored a classic that sent Fiji to the Singapore 7s semis. From somebody who was criticised for kicking away possession, our playmaker has turned into a star. Ratu Filise coach and former Nadroga powerhouse Etika Tovilevu described Nasilasila as a hardworking, passionate and dedicated 7s player who has developed into a world-class 7s player. He was at one time the water boy for Ratu Filise, who dominated the 7s scene in the 1990s, and today he is one whose magic we rely on to guide us when the going gets tough. Noni has been in exceptional form and his side-steps, speed and accuracy have been admired by pundits. I admire Nasilasila’s vision as the kingpin in the backline and when he combines with Jerry expect a moment of brilliance as has been evident in the WRSS. He was instrumental in Fiji’s narrow win over the Blitzbokke in the Singapore 7s semis despite being yellow carded in the dying moments. I think it’s the big hits that he copped from older players while playing touch that has made our star solid and enables him to deliver those try saving tackles. Nasilasila has grown in his level of confidence and maturity and continues to impress in the series. I can’t wait to watch our rock star deliver more magic come the London, Paris and RWC 7s. As I conclude, I thank Gareth Baber for having faith in Amenoni and for developing and nurturing him. Finally, my thanks and appreciation to Matilda for the write up on me (FT 10/05) and senior writer Kositatino for the kind words in Saturday’s The Fiji Times. Vinaka vakalevu for the inspiration, lady and gentleman, which made a difference! Trust me! RAJNESH Ishwar Lingam, Nadawa, Nasinu

FIJI One News reported that Fiji’s PM pointed out difficulties in raising funds to fight climate change. Not that there is not enough money though. I believe all countries on this planet are spending plenty money on their military to defend their country and some more, instead of spending that money to save planet Earth. What’s the point? No Earth – no countries! Hans B. Boernke, Savusavu

No job for life

MY brother Simon has hit the nail right on the forehead. But he extended it a little too much. For my employees, it’s not two to five years … it’s two to five months. The drawn-up contract costs little. I end up paying more when workers are not proactive, productive or being efficient. Workers are a company’s biggest assets. You can buy a cell phone or a machine tomorrow, but not experience! They know it all too well, that’s why they are taking advantage. I believe we as a nation lose millions in investments due to our ’lazy’ workforce. Period! A.SHARIFF Shah, Savusavu

Congratulations Tailevu for an unbeaten run and hopefully we are back on track in regaining the glories we used to achieve. I believe being regulated was a lesson and what better way then to recover by starting from the bottom. Three wins in a row is a good start and keeping the momentum would not only boost the team but the supporters and the vanua of Tailevu. To all players, officials and management, you have my prayers and support. Toso Tailevu toso. Tomasi Boginiso, Nasinu

Poverty is due to lack of creativity. So those poor need to enliven creativity, and where is this found? Nowhere other than within one’s own self. So it is easy to access and use in life. On a daily basis. Once the method is established and enlivenment begins, the poor man is on the royal road to success. Life improves and he is happy. Hassan Ali Vitogo Pde, Lautoka

Finally the road humps at the Velovelo bridge have been removed. Now that fellow in Kava Pl can whine about something else. Wise Muavono Balawa, Lautoka

The lines for the flood-affected recipients are getting longer and longer. What made our people depend so much on handouts? John Brown Drasa Vitogo, Lautoka

The responses of Opposition political parties to infrastructure and road conditions (FT 12/05) seems like a performance assessment of Fiji Roads Authority (FRA) as a ‘poor’ provider of roads. Although Government allocated substantial amount according to Section 34 of the Constitution, it seems inadequate by the Opposition in the face of continuous changes in leadership and interference. It seems the FRA account has to be audited for efficiency. Amenatave Yaconisau Palm Drive, Delainavesi

Not everyone has the opportunity to travel on a fibreglass boat with a 60 horsepower outboard in choppy seas but for those that have, driving from Deuba to Suva on the Queens highway is a similar experience. Dan Urai, Lautoka

One wonders how easy it is for a church group to obtain a permit to march in Suva. For the unions, I believe it’s quite a different story. Hans B. Boernke Savusavu

THE name Semi Radradra drove chilly waves down the nerves of many rugby league players. After making headlines in rugby league, the Toulon winger has been named in the Fiji Airways Flying Fijians squad for the Pacific Nations Cup and June Test series. With time running out to next year’s RWC in Japan, our 15s team needs to get the rhythm and produce the dynamic explosion similar to what the 2015 team did even though they failed to make it beyond Pool A. Fiji was in the same boat as hosts England, which also bombed out from the pool stage after getting thrashed at the hands of Australia 33-13. Earlier the Roses had been edged by a group of fired up Welshmen 28-25. Back to the last RWC and Fiji took giants England, Australia and Wales to the wire before losing out 35-11, 28-13 and 23-13 respectively. Since then the Flying Fijians have not looked back and have beaten teams such as Italy and Scotland. Our Flying Fijians squad looks promising and it is my hope that local players Mawi, Vugakoto, Vularika, Tuisue, Navuma and Voka will be considered for national duties. They have been in fine form for the Fiji Airways Drua side and their provincial teams. My best wishes to McKee and his management as they prepare our Flying Fijians for the PNC series and June Tests against Samoa, Tonga and Georgia. As I conclude, I congratulate the mighty Crusaders and Nadroga as they beat the Waratahs and Navosa respectively! A champagne weekend of rugby! Rajnesh Ishwar Lingam, Nadawa, Nasinu

As an avid reader of The Fiji Times, firstly let me salute the Times for bringing in inspiring, motivational and sometimes heart-warming narrations of our mothers in villages, towns and cities. Sometimes, it is beyond my comprehension as how the educated and affluent in society can leave their mothers in elderly homes and in solitude. I have expressed my gratitude through The Fiji Times on numerous occasions to those children who are taking good care of their mothers and the elders. We are not doing any favour to them. It is our moral and social responsibility. I believe that those, particularly the educated and well-to-do children and who are shying from this responsibility, to take stock of their attitude again. Mothers are the epitome of love, strength and sacrifice. I pay homage to all the mothers in Fiji for their contribution towards the welfare of their children in particular and the country at large. I read somewhere that a human body can bear only up to 45 del (unit) of pain. Yet at the time of giving birth, mothers feel up to 57 del (unit) of pain. This is similar to 20 bones getting fractured at one time. Can you imagine it now the pain mothers go through for us? I hope all the readers of The Fiji Times get my message. Arun Prasad, Dilkusha, Nausori