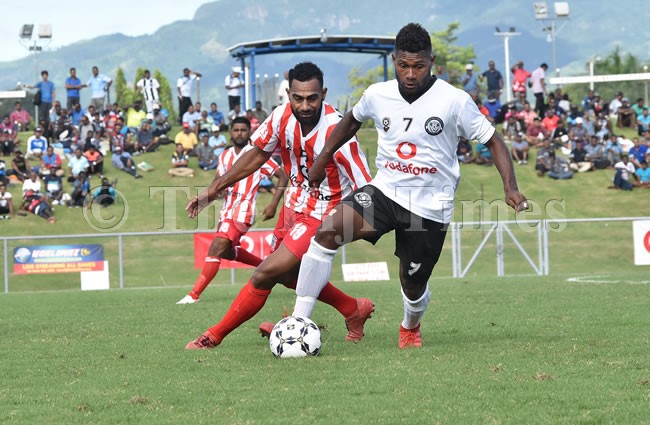 Gagame Feni on attack for Suva against Labasa during their Vodafone Fiji FACT clash at Churchill Park in Lautoka. Picture: BALJEET SINGH

It doesn’t come as a surprise that Solomons strikers – Suva’s Gagame Feni and Lautoka’s Benjamim Totori are in the race for the golden boot award and our local strikers are off the mark. While Feni has been making head-lines with some of his goals and assists, Totori’s experience and skills will be an asset to the Blues and will come in handy when the going gets tough and I am pretty sure that both the Solomon Islanders will play a crucial role for their teams. I pick Ba and Lautoka ahead of Suva and Nadi respectively and the pool winners should face-off in the final and the hosts should win this year’s Fiji FACT and end a 17-year old winless jinx. However, Suva and Nadi should not be taken lightly and I have a belief that fireworks and tonnes of excitement will be part of the 2-day affair. My best wishes to the Ba, Nadi, Lautoka and Suva fans and although the Lions kissed the tournament goodbye my full support is with the “northern bullets” and as they say “once a Lion, always a Lion”! To our number one soccer commentator Raymond Stoddart, we will be glued to Radio Fiji 2 for your wonderful and lively commentaries. Looking forward to the “mirch masala” and soccer excitement! Rajnesh Ishwar Lingam Nadawa, Nasinu

They wake up at 4am, cook, clean and dress their children for school and hurry to the already filled trucks to make their way to work. Life in the Old Capital of Levuka has its challenges but it doesn’t seem to deter the 9000 people on this island, however, we all seem to be simultaneously suffering from back pains which apart from our long grog sessions could partially be attributed to our road conditions recently. It’s been months since Fulton Hogan packed its bags and left our streets to the mercy of the waves. I don’t know who (if anyone) has been appointed to take over but a humble plea to our distinguished leaders. If not a road contractor could you perhaps send a physiotherapist for our pains. Izhaar Ali Levuka, Ovalau

I believe the Government should open up and allow other superannuation fund institutions to compete against the Fiji National Provident Fund (FNPF). Currently the FNPF is enjoying monopoly status being the only superannuation fund by law in Fiji to collect compulsory contributions from workers and employers towards the retirement savings. I believe employees in this case should be given the freedom to select their own superannuation institution to deposit their superannuation savings and plan their retirement. Opening up the superannuation institution market would mean healthier competition, benefits with options for employers and employees. Competition will definitely come with its own risks and challenges but it will be worth it for the Fijian workforce. Open up market for employees to choose their organisation for their future retirement package. I believe the FNPF should be tested as well. Gulsher Ali Lautoka

Commissioner of Police Sitiveni Qiliho has made an urgent call for people to be security conscious while moving around cities and towns around the country and report any suspicious cases of opportunists. While the public acknowledges this, the public should be able to a certain degree conduct their movements without the fear of being mugged, attacked and robbed in our own home and on our streets. Given more than 400 police officers had been deployed to ensure the safety and security of the visiting delegates for the 52nd ADB meeting in Nadi a few weeks ago, perhaps the police could put in the same effort to providing visible and beefed up police patrols on foot, to ensure the same level of safety and security is provided for the public. Sanya Catherine Gain Lami

I would like to sincerely extend my appreciation to the Fiji Roads Authority for making a speedy recovery of our roads especially after the heavy downpour for over two weeks. Definitely, the conditions of the roads deteriorated from bad to worse, causing huge traffic congestion and frustration on road users. Many potholes got so big that it led to serious damage such as suspension impacts, damage to mags and tyres. The sad part is that no compensation was made. Besides that, I must also thank the construction companies handling the Suva–Nausori road project for doing a marvellous job and in ensuring that there is good flow of traffic. All road users are also urged to exercise greater responsibility and precaution when using the road so that roads are safe for everyone. Naveen Dutt Wainibokasi

We refer to Kositatino Tikomaibolatagane’s letter dated (08/05/19) on “Inactive streetlights”. The 12 streetlights in the Navua section have been non-operational because of an accident that damaged the switchboard. This was a case of a “hit and run”accident. Site assessment revealed that the switchboard and all electrical components inside it had been badly damaged and the entire power supply system required a complete replacement. The contractor has since completed all the civil as well as the electrical work pertaining to the reinstatement of the power supply system to these streetlights and a permit for the inspection of the same has been lodged with EFL (Energy Fiji Ltd). We are expecting EFL to carry out the inspection and testing of the electrical works today (May 10, 2019) and energise the switchboard that will see these 12 streetlights come back “on”. The FRA (Fiji Roads Authority) has had around 15 streetlights along Queen’s and King’s roads, 12 in the greater Suva area and seven
traffi c signals damaged as a result of motor vehicle accidents in the past 12 months. The FRA once again appeals to drivers to please drive carefully within the posted speed limits and be very aware of your surroundings to avoid accidents on our roads.
MUSHEER ILAHI KHAN General manager Electrical, Fiji Roads Authority

We refer to Simon Hazelman’s letter titled “Eating out” published in The Fiji Times on May 2, 2019. The Consumer Council of Fiji would like to acknowledge Mr Hazelman for highlighting the issues concerning some restaurants around the country. The council is no stranger to this matter as numerous complaints in relation to restaurants and bars are received every year on poor hygiene and sub-standard quality of food. Ensuring that Fijian consumers get the best value for their money is of utmost priority to the council. As such, the council conducts routine market surveillances and service visits in all divisions and visits restaurants, cafes, bars and bistros to ensure the outlets are in compliance with the relevant regulations. This is aimed at inspecting the outlets on issues such as the location, hygiene, cooking equipment, cleaning facilities, food presentation and storage and hygiene. The council had previously lobbied for the introduction of a grading system that measured the cleanliness and hygiene of a restaurant. This was introduced in 2012 and the council continues to monitor restaurants to ensure compliance. The grading is conducted by the municipal councils in the respective areas and this must be displayed clearly for consumers to view. The grading system allows restaurants to be awarded either “A” certificate which indicates 90% compliance to requirements, ‘B’ grade indicating 80 per cent compliance, “C” grade indicating 70 per cent compliance while “D” grade indicating 70 per cent compliance. The council also works closely with the Ministry of Health’s Food Unit, the respective municipal councils and the Fijian Competition and Consumer Commission in highlighting non-compliant outlets. Where breaches are found, the council informs the respective authorities and warnings/notices are issued. Moving forward, the council will continue with service visits to ensure dishonest traders are kept in check and restaurants improve the quality of their service not only in maintain cleanliness but also the quality. The council urges all restaurants and food outlets to maintain standards and provide the best service that consumers deserve. They must not mislead consumers about the quality, authenticity and price of food served, and ensure that their price matches with what consumers receive. All restaurants are urged to uplift the standard of their service as they will help build consumer confidence in their business. Consumers are also advised to check for the displayed grading system and make an informed choice. Consumers are advised to call the National Consumer Helpline toll-free number 155 or email complaints@consumersfiji.org if they encounter any issues with food outlets. Consumer Council of Fiji Suva

Bro Simon, I don’t know whether Johnathan Smith did what he posted on Facebook or did not. I don’t have any Facebook account. I haven’t seen any verified pictures or videos. There are no avenues to summon crabs to give evidence either. But wait. The Minister for Fisheries has confidently heaped praises on the responsible citizen. Maybe, he has the evidence. Regardless, even if it was only one undersized crab, well done Mr Smith. Mohammed Imraz Janif Natabua, Lautoka

Hats off to The Fiji Times for reporting on bullying cases in schools which is now becoming a serious threat and issue! It’s time that more awareness is raised on bullying and all stakeholders must join hands and eradicate bullying in schools. It’s not only the teachers or school administrators but parental support and engagement is a must to reduce bullying before something nasty happens. Rajnesh Ishwar Lingam Nadawa, Nasinu

Congratulations to the four semi-finalists for the Fiji FACT. It had been a wonderful tournament so far and hats off to all teams and team officials. I sincerely hope that Tavua will be assisted by the technical department of Fiji FA for the remainder of the season. We have just witnessed miracles during champions league soccer and hope it had boosted the morale of our local players. May the best team win. Arvind Kumar Raviravi, Ba

I believe the banking institutions have gone tough on lending for unexplained reasons over these past months. If the Fijian economy has healthy reserves than why are the banks introducing measures which make applications for loans so difficult for buying properties, investments and seeking additional loans? I believe banks have gone tough on lending. What does it mean? Gulsher Ali Lautoka

I would like to ask the Fiji Football Association if the tracksuits and other clothing provided to the women’s soccer team is taken back after they return from a tour. I hope someone from the FFA will reply if this is not true. Sukha Singh Labasa

Who is the overtly talented cartoonist of The Fiji Times? The relentless production of messages through sparky cartoons six days of every week is exemplary. Mohammed Imraz Janif Natabua, Lautoka