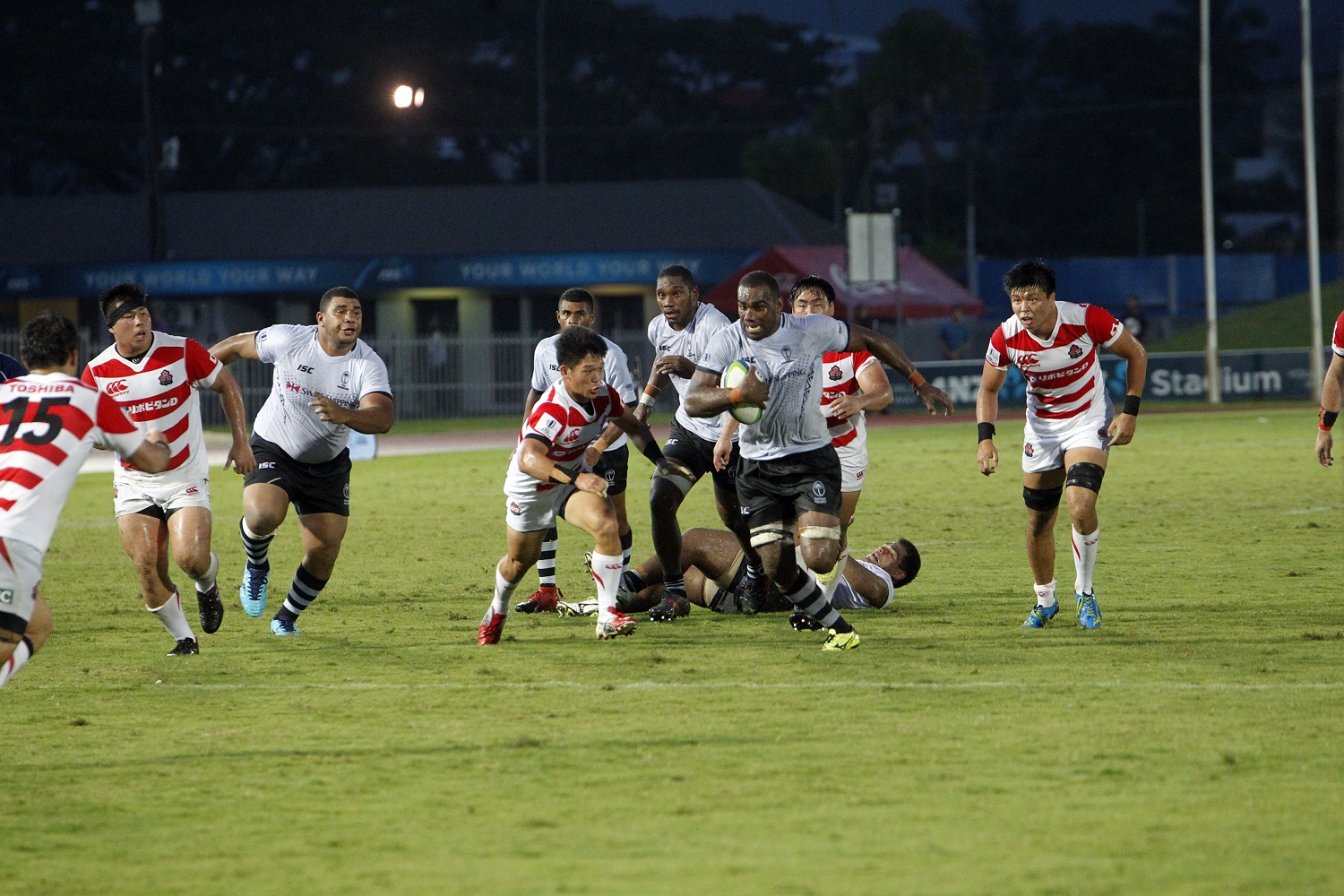 With having most of the under 20 making headlines in the past shows good sign that Fiji rugby is moving in the right direction. Even without some provincial stars, the Warriors team seems to be on course. After thrashing Tonga and Japan, who have won a game each, the Warriors against Samoa should be an easy cruise unless Samoa is saving their best for the last. The Warriors team winning by huge margins indicates the talent in the team and maturity in the coach, to lay a platform for our Drua and national side. As a Rugby World Cup year don’t be surprised that some Warriors are in John McKee’s books already. Having Frank Lomani and Vota leading by example was a key factor in the games, all team members performed tremendously and the Warriors need our support this Saturday. Vinaka boys. Tomasi Boginiso Nasinu

For genuine news material, we refer to newspapers, radio, television and credible internet sources. The news from these sources are trusted and taken to be true. They are governed, have regulations and ethics. They have qualified, renowned and experienced journalists who gather newsworthy materials which are verified and edited. For a country like Fiji which boasts a high literacy rate, people take social media posts and hearsay as true. They even get into heated debates to prove that point. To distinguish between genuine and fake news, one has to analyse the source credibility. Mohammed Imraz Janif Natabua, Lautoka

The recent and urgent grounding of all 737 Max 8 aircraft is no doubt a huge loss for airline operators who fly the planes. While it is an economical disaster for some, it sure has created a huge opportunity for some airline operators who no doubt will take advantage of the business void created by the 737 Max 8 groundings. Here is a perfect example that every situation, when properly perceived, becomes an opportunity. The groundings are also a stark reminder of how fragile the airline and tourism industry is. The decision to ground all 747 Max 8s is, however, the right one as there is no security where there is fear of the uncertainly! For the sake of our national airline, let’s hope this impasse ends hastily. Simon Hazelman Rava Estate, Savusavu

I refer to Emosi Balei’s letter (FT 14/3/19) regarding the dwindling of our pensions, in the face of drastic increases in the general cost of living, It dwindled enough for us pensioners, when the FNPF drastically cut our pensions in 2012 (some of us by nearly 50 per cent). My deceased husband David Burness and we pensioners took them to court. I think it is about time that this was looked at again, whereby the old age pensioners not only have their original pensions reinstated but back paid as well, from the time they were cut. There aren’t that many of us old age pensioners still standing! And as Emosi points out, cost of living adjustments are necessary to keep up with the increasing cost of living. Talei Whippy Burness Suva

I am taking back what I said last week, that if our boys do not successfully defend the Canada 7s title; they can kiss winning the 2018/19 HSBC World Sevens Series goodbye. The USA 7s team was not in the cup final for the first time in this current series, losing to Fiji in the third place playoff and getting only 15 points, while the New Zealand 7s team won the fifth place playoff to earn 13 points. So with the points table looking like this: USA 113, New Zealand 106 and Fiji 101 and teams like South Africa, England, Australia, Argentina, Samoa, France and Spain coming out very strong in the last five tournaments; I say Fiji can move up the points ladder if it wins the favourite Hong Kong title. We all hope that coach Gareth Baber will help the boys to improve and master the basics and work on their fitness and all problem areas. I am kind of feeling good already but we will all feel much better if our boys lift that Hong Kong crown once more this year and remain consistent in the final three legs. You can do it, go Fiji go! Savenaca Vakaliwaliwa Suva

Another day, another expat CEO. Not too long ago, we gained our independence from Great Britain. Some of our senior public servants were sent abroad to establish our high commissions and enhance the associated diplomatic relations. Others were sent abroad to train in some of the best universities. They returned. They replaced the many expats that were running the public service then. More Fijians were sent out for further training. The localisation policy was being implemented in all sectors. Now that Fiji has very well trained and experienced Fijians, there appears to be a reversal and an extension of this policy. We now have our experienced and well trained Fijians working for other countries in the Pacific region. In their place, come this group of expatriates from different corners of the globe with their peculiar accents. Some have quickly left too because of some personal reasons. As a Fijian taxpayer, I ask — why aren’t Fijians being appointed to these CEO positions? Is it really a case that we don’t have qualified Fijians for these posts? I don’t believe so. Why the reversal in this policy and the endless hiring of expats? I submit that such a practice borders on being discriminatory against our own citizens. One subtle observation — Some, though of age, even close to retirement, are still not married for some odd reason. Why? Kiniviliame Keteca Nausori

Don’t look at your phone now, but mobile apps are dominating the world. With four billion people online and 31 billion connected devices, mobile apps are quickly becoming the preferred way of doing business, for everyone from your customers to your partners to your employees. Internet has no boundaries and if organisations, businesses, supermarkets chains, start developing apps based on their nature of business, it would be great and a great tool for marketing concept. Why don’t we receive alerts on specials from supermarkets, they can also enable smart location-triggered features such as geo-fenced push notifications of discounts and reviews. Apps also improve customer loyalty. The mere icon of a company’s mobile app on their phones enables a persistent presence of mind. And if that app is associated with your company’s loyalty program, it has an even more positive effect. Then Fiji surely will move into digital transformation towards a smarter Fiji. Mobile apps can become a strategic necessity for business. The concept is wide open and the need of change towards apps is the way forward don’t you think? Neelz Singh Lami

Does it need to be the head of any organisation, department or anyone who can give directions, guidance and counselling? I mean in uni, we use senior students as mentors rather than the head of school. Can’t that same principle be applied to any organisation? Just a thought! Pita Soroaqali Nadarivatu

A few touch up and Churchill Park should be compliant to world and New Zealand rugby compliance requirement. Thumbs up to the Kiwis when it does happen. Dan Urai Lautoka

From February me and my wife have not been getting the full top-up of $40. I do not know if other senior citizens are facing the same problem. Can someone with authority explain this? I am concerned. Paras Naidu Lautoka

What is so special about this piece of land? That I believe our friends aren’t willing to settle elsewhere? Steven Chandra Suva

Now that Rajesh Patel is on the FIFA council, can he ask FIFA to help Fiji Football Association financially so they can just have one soccer tournament in a year and allow all associated associations to have regular club soccer competitions? Sukha Singh Labasa

Old bus stop shelters between Suva and Nausori have had some seats broken and some missing for quite a while now and no one seems to care at all. Felt sorry for some elderly people wanting to be seated for a breather but there weren’t any seats available. Hopefully the relevant authority would respond to this issue. Tomasi Boginiso Nasinu

I believe the decision by Fiji Airways to ground its Boeing 737 MAX 8 aircraft, backed by the regulator Civil Aviation Authority of the Fiji is a reactive approach after Australia and New Zealand took necessary action on the mentioned plane. Ilaitia Bose Suva