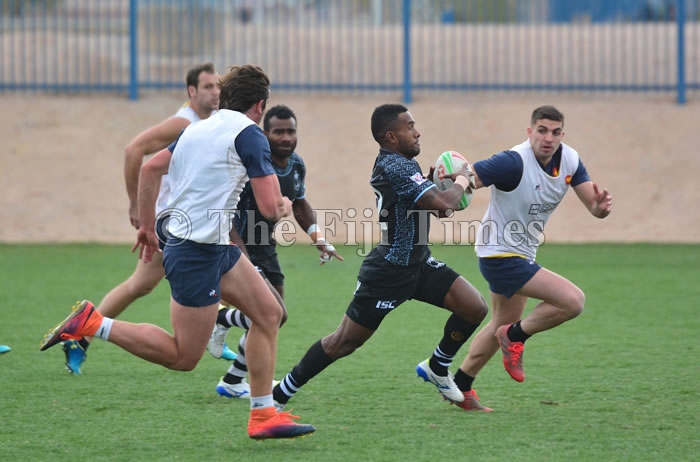 He acknowledged Fiji’s impact and contribution towards the global growth of sevens rugby.

He stopped short on commenting about the hosting rights of sevens tournaments as the selection process is currently in progress for the next four-year cycle.

Despite Fiji’s sevens status, there is this itching question.

Will Fiji be successful in its bid to host a tournament?

The answer to this question lies in collectively finding and working on solutions to the following question.

The comments by World Rugby CEO, Brett Gosper, that Fiji sevens makes a strong contribution to the global growth of the sport (FT 28/02) is not only an understatement but a serious matter of fact!

Our sevens game epitomises the way sevens should be played with our unorthodox Fijian open style of rugby.

Not only is it thrilling to watch, it is captivating, exhilarating, intoxicating, and absolutely electrifying!

Our sevens game is certainly very entertaining to watch.

We deserve a leg in the series Mr World Rugby CEO, no doubt about that!

I doubt pleading with LTA is going to make things any better.

I believe what the minister needs to be doing is take constructive steps at making our roads safer for motorists and pedestrians and saving lives.

He needs to propose a change to existing laws to crack the whip on those violating traffic rules with stiffer penalties.

I believe hefty fines, imprisonment and the cancellation of vehicle and drivers’ registration are measures that need to be put in place.

The solution to our traffic problems is to deal with it where it hurts the most!

Nothing else seems to be working?

We can rightly claim that Roy Krishna is the best footballer ever in the history of football in Fiji.

Never once a footballer in Fiji has ever reached the pinnacle of football than Roy Krishna and for that he is being nominated to the 2018 Sportsman of the Year award.

However, given the context of his involvement in football, much of it as we all know were outside of Fiji Football assignment, or to be precise, his achievement of late were more in the A-League competition than in the Fiji colours.

That being said, it is sad to learn, Fiji’s best female sportswoman in 2018 Eileen Cikamatana is not considered for the top award for reasons best known to Weightlifting Fiji officials.

If Eileen is not selected for the 2018 award, then no one deserves to be called the 2018 sportswoman of Fiji.

In the public domain, she is the best for 2018 and no one can dispute that.

A very sad week for the military of Fiji as three of their, I could say, most and very senior military officers passing away and hearing stories from former and present military officers, the three were very experienced, outstanding, dedicated and loyal.

And they were always respected and adored to the outmost.

The late Col. Manueli was the first indigenous local commander of the Royal Fiji Military Forces and was in charge when our soldiers were posted in their first peacekeeping mission in the Middle East in 1978.

Our condolences to the families of the three military officers and may their legacy live on among our military men.

It was a delight to see former Manchester United soccer star Mikael Silvestre pictured with the Fiji Football Association (FFA) brass and I hope that his presence will not only lift the profile of the FFA Awards Night but also lift the profile and standard of Fiji soccer.

Our top bet Lautoka has kissed the 2019 O-League competition goodbye.

Ba lost to Wellington and managed a draw against the homeside Erakor Golden Star and will need a huge win against Kiwi and hope that Wellington thumps Erakor in order to progress from its pool.

Our regular correspondent from Savusavu Shah wrote about the local league competition in the Hidden Paradise and that only one match was played.

Furthermore, the performance of once dubbed giants Rewa is in doldrums.

I hope that this rings alarm bells somewhere and some strategic action are taken to restore our status as Pacific champions.

By the way, welcome to Fiji Mr Silvestre.

I hope that you’ll enjoy your vacation in our beautiful island nation and I’d love to capture this moment with a selfie!

Around tanoa sessions, a number of fans have been discussing the X factor in our national sevens rugby team as they seek to conquer the Las Vegas sevens tournament.

Whatever one’s views, I think its more of a T factor.

We must play together as a team.

Once we lose sight of this we will begin to disintegrate like we did against Australia and New Zealand before a nightmare performance against England.

Meanwhile, what happens if there is disagreement between a coach and manager?

For example, if a coach wants players to rest early but manager wants them to stay up a little later at night.

All in all, we are only as good a team.

United we stand and divided we fall but for now one can be sure that fans are behind their favourite team.

Can the high price of alcohol be linked to the other kind of drugs problem?

There has been a hike in the price of a roll of marijuana.

You ask how I know, I’m not telling.

You have got to have “balls” to go public about having your prostates checked for cancer.

Dr Ifereimi Waqainabete fits his portfolio very well as a medical practitioner, a true professional and walks our government’s talk, he understands the practicality and issues that concerns its workers and what our hospitals need or require.

He is young, smart, energetic, enthusiastic and one can see that he is a Mr Fix it and is on the ball, a great and true servant for our nation.

Just wondering if the stolen yaqona plants at Savusavu, Tukavesi, Cakaudrove will also be sent for testing.

People have so many good thoughts and fond memories of those who pass away.

The views about those same people were completely different when they were around.

Paul Geraghty has very ably nullified my sentiments on the use of Hindi and its written script (FT 23/02).

In fact, his response is nothing but a slap on the face of Hindi lovers.

It is a known fact that we live in the Fiji Hindi world but our formality in terms of customs and traditions is not.

In his endeavour to nullify my sentiments he has gone astray.

The essence of my letter was to highlight that Hindi has its own script which should and only be used to express our values and beliefs.

Without giving any contribution to our Hindi literature he is trying to justify something he has no knowledge about.

As an ardent reader in Hindi since my primary school days (full credit to my teachers) and as a teacher for 30 years (including teaching Hindi) I have enough competence to speak on this issue.

If Fiji Hindi is our daily food, Hindi in its original state is the special dish for special events.

The very fact that Hindi has its own script signifies the importance of its use where required in its original state.

The script itself speaks volumes about our creativity, culture and arts.

This may not be admired by outsiders.

Yes, Fiji has its own Hindi (which I also use daily since birth), Fiji English and of course simplified version of the iTaukei language for daily use.

But when it comes to our culture and traditions, the whole environment changes to its original state which has respect, faith and reverence under the formality of the original language.

I would give him 0/100 for linking Hindi with girmitiyas as they came from various parts of India and had their own specific language.

I have not seen any literature written by any of our professionals in Fiji Hindi except one which has never been mentioned in any of our traditional settings or gatherings.

All point of our references are from Hindi literature by Tulsidas, Kabirdas and the likes.

The very essence of solemnism would not dare to attach.

We already have lost a lot of our values in favour of technological advancements and I do not want outsiders to impact negatively on our culture and practices of wisdom and respect for the family, relationships and dignity of our religious practices.

Give us the freedom to keep using the Hindi in our customary practices, music and arts and let us cherish our Devanagari script which cannot be replaced by any other written symbols or designs.

Remember, a fish can only understand the environment of the ocean by being in it, not from outside.

A lot of damage has already been done to our culture and wisdom and that is more than enough.

God bless our people deprived of our Hindi and also bless those who are being brainwashed professionally into losing their culture and values through loss of their language.

To the correspondent, remember that there are also many versions of Fiji Hindi as well.

I salute teachers for teaching correct Hindi in their classrooms and all those who organise specific functions to ensure Hindi is kept alive.