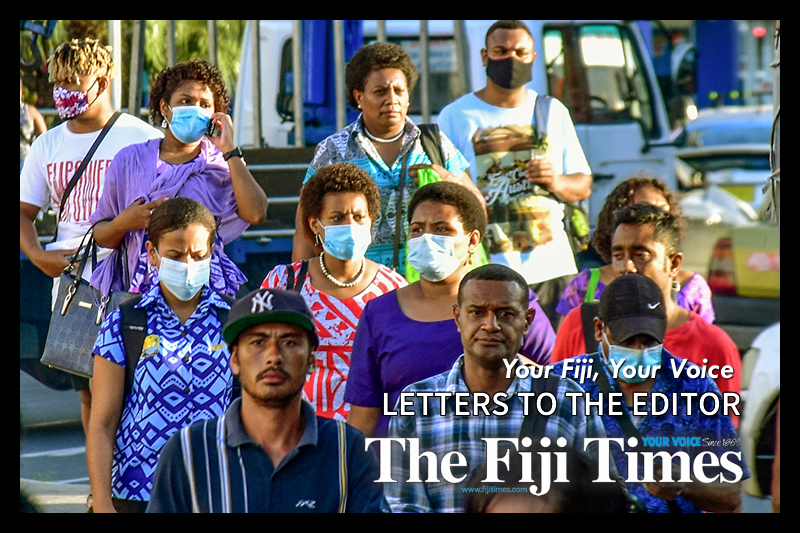 The article on page 24 of The Fiji Times yesterday is very positive for our 7s team which will be taking part in the Olympics in Tokyo. Radradra’s presence in the team with his current form will surely be just like adding gloss to stellar. I hope that Radradra makes the final cut. Pranil Ram Votualevu, Nadi

I was delighted seeing three big rugby names (Kini Murimurivalu, Semi Radradra and Nemani Nadolo) featuring on the back page of yesterday’s The Fiji Times. Furthermore, my delight doubled when I read that Bristol Bears rugby star Semi Radradra could feature for our national 7s team at the Summer Games in Tokyo. Semi, who has shown interest in representing the national 7s team, will be an asset both in the forwards and backline. It’s a pity, though, that Aminiasi Tuimaba and Filimoni Botitu might miss out, but I’m hopeful that we will choose the best to defend our Olympics gold medal. Our boys have arrived in Australia, and have settled well, and I look forward to the Oceania 7s battle against Australia and NZ! RAJNESH ISHWAR LINGAM, Nadawa, Nasinu

THE mental anguish people are having to deal with during this pandemic cannot be quantified. Many are suffering in silence. And they’d rather not let on because they feel if they do, it’ll somehow reflect poorly on them. Sad but true because it’s to do with their dignity. Because their well-being is vitally important, it’s crucial to check on loved ones, friends, neighbours and even work colleagues. Check on them and see how they’re doing. All it takes is a phone call and a listening ear. Your call could mean the world to them right now. Vinaka. COLIN DEOKI, Australia

(This poem is dedicated to World Oceans Day celebrated on June 8) OCEAN has a world of its own Stirring deep thoughts Enigmatically firing imagination Ocean is unfathomable Like one’s unknown capabilities Ocean is a great teacher Life is like waves of the ocean Dancing in rhythmic ways A journey of ups and downs Calm and peaceful at one time Rough and tough another time Sometimes in between these ends Ocean has infinite absorbing power
Having the heart to swallow What the rivers and seas bring in Absorbing to withstand anything Guiding us to cope with setbacks Adopting, adjusting to all situations Ocean is therapeutic to life Providing a serene atmosphere
Where one finds solitude and peace Ocean has secrets to be discovered Life has an unknown future Where none know what’s to happen Ocean is mysterious, unpredictable Just like the life of a person Life is like an ocean And Ocean is life. BHAGWANJI BHINDI, Nasinu

I TRAVEL all over Lautoka and despite MoH instructions, I see people roaming the streets in groups without masks. I am glad that legislation has been enacted to penalise these kinda people. May I suggest that the penalty is to do community work — our roads need sweeping especially the bus stands. ALLEN LOCKINGTON, Kava Place, Lautoka

JAN Nissar is at it again, only this time I believe Mickey Mouse is discouraging people from the commandments
of God. Even saying no amount of prayers and fasting will help? With this God-sized problem, who knows what
else is to follow in this virus’s behaviour and mutation. Men had already started playing God in predicting its second and third waves in its initial stage? I’m not saying that vaccines are bad, but one shouldn’t insanely attack
acts of faith. Which has sustained mankind since the beginning of time. If that doesn’t work for him, doesn’t mean they don’t work for others. Younger people are also reading letters, what example is he setting? God also talks about such people in Psalms chapter 14, verse 1: The fool has said in his heart, there is no God. Please just stay in Disney land and refrain from interfering in the real world with your cartoon theories. STEVEN CHANDRA
Suva

AREKI Dawai’s letters have made my day in the past two days. He calls a spade a spade and pulls the bull by the
horns! This is the calibre of people that ought to be in Parliament post-2022 elections. Malo. ALIPATE TUBERI Suva

IT seems that this dreaded viral infection, occurs in waves of active transmission, with the borders shut as a safety precaution, except for cargo traffic and some repatriation, what now is COVID-19’s infection mission? None other than local and even community transmission, from the borders to communities, as its new location, infected individuals, who then infect others, that eventually develop into a small or bigger clusters, infections increases, rising to a peak thereafter, once area is on lockdown with tests and screening therein, cases can be identified, isolated and quarantined, there will always be peaks, troughs, then a period of calm, it can be very short or sometimes very long, then there will be a new wave and a surge from careless breaching, then subside to yet another trough and then quickly disappearing, but when carelessness sets in with unnecessary moving, a new wave begins again, in a cycle never-ending, that’s just the trend we have to face henceforth, because of a viral infection from an overseas birth, carelessness, non-compliance and complacency, will not help us to gain the required herd immunity, please always remember, that we are really, all in this together. EDWARD BLAKELOCK Admiral Circle, Pacific Harbour

BEFORE we used to hear and read only one, two or three cases. Eighty-three cases is quite a lot. On the other hand we continue to learn of curfew and other breaches. When will they get it? I think until the serious effect hits some directly, they will continue to breach and take things lightly. How hard is it to sit in the comfort of one’s home and have drinks there during curfew? Why put the whole nation at risk only because some are so reckless to do the right thing. Still there is time. Grow up people. This is our beloved Fiji and we have the responsibility. This time it’s everyone’s. KIRTI PATEL Lautoka

Maybe LTA can learn from this

Last weekend was Memorial Day weekend in the US, North Carolina troopers (highway patrol) nabbed 190 speeders going 86 mph (138 kmph) and above during a pre-Memorial Day enforcement crackdown on Interstate 485 in the Charlotte area. Of those drivers, 31 were accused of driving at 95 mph or above during the four-day campaign, the data show. The posted speed limit on the I-485 is 70 mph. In the four-day campaign on I-485, 421 total citations were issued by troopers, Huntersville police and Mecklenburg County sheriff’s deputies, according to the Highway Patrol data. The figures include 107 reckless driving citations, 27 for seat belt violations and four citations against drivers for failing to properly buckle up children. Five troopers in unmarked cars covered all 67 miles of Interstate 485, randomly choosing a different stretch of the highway each day. The effort came as road rage incidents continue to rise in Charlotte. Troopers have seen an increase in aggressive and speeding drivers and road rage incidents in recent months. The Highway Patrol will conduct unannounced enforcement campaigns throughout the year on I-485 and elsewhere. “All we’re trying to do is alleviate it and reduce it as much as possible,” a trooper said of the problem of speeders. “And it’s a problem that will never go away.” The US has hundreds of freeways and highways for millions of km and somehow all of them are monitored to maintain driver discipline. Fiji has only one highway which is less than 500km and yet I believe LTA is not able to maintain a desired level of road safety. There are certain areas sections of the highway like the stretch in Martintar (I am assuming the speed limit is 60 kmph) as there are no speed limit signs where speedsters routinely drive over the national speed limit and run the red light without a care in the world because LTA does not seem to care. I believe it is too busy making life difficult for drivers 70 years and older while some younger drivers are responsible for most of the accidents. Arvind Mani Nadi

I’m shocked to read in The Fiji Times of June 3, 2021 page three, about 73 victims duped into sending monies to a tune of $98,658 to Benin-based scammers, Western Africa, from Fiji in 2020. As an ardent fan, following the #Trilogy Media #Scammer Payback Youtube program in my free time, I would advise all Fiji citizens to view their Youtube videos about catching scammers. These scammers mostly target retired citizens, aiming for their life savings. Don’t be fooled into receiving an email or mobile messages that you have won a lottery or someone wants to donate you their will. You can even find out their IP address, where they are sending their email from, if you watch the Trilogy Media Youtube videos on how to catch scammers. I hope our Fiji Financial Intelligence Unit will raise further awareness on scammers to the public in the not too distant future. Jioji M Cakacaka Tadra, Votualevu, Nadi

Members of Parliament have now found many other individuals and institutions for their attacks in the Parliament. The beneficiary is The Fiji Times which has not been attacked so far in this session. Bharat Morris Vatuwaqa, Suva

Upon the lifting of the Tuvu border, I shot into Lautoka to buy some beef as chicken has basically been the only protein we’ve had since lockdown, needless to say we had to do a few jaw exercises and stretches before consuming the bovine being that we officially had chicken jaw. The best part was watching my son enjoy every bit of his meal, oh yes! Lautoka did provide the real bread. Nigel Fiu Owls Perch, Lautoka

What happened to the saying “when you move, the virus moves”, with Western borders opened the people started moving and so did the virus. What I fail to understand is why the borders were lifted when Fiji has more then 30 cases daily. Lautoka was under lockdown when only one case was known. In 48 hours the virus moved to Tavua and Naitasiri. Deven Sahay Lautoka

I had to laugh when I saw a video of a chap who had a spoon strapped to his head. He said that after getting the COVID jab, he noticed that when he went into the kitchen, metal spoons rattled. Then he ended by saying that he would post a photo, when his fridge would be stuck to his head. During these tough times laughter helps ease some stress. Allen Lockington Kava Place, Lautoka

There are a lot of people with transport to assist FRIEND. All they need to do is reach out to other NGOs and the many individuals who can provide transport for delivering food to the needy. Dan Urai Lautoka

Say, if we have municipal council elections tomorrow and candidates from the various registered political parties end up victorious, would that in any way have an impact on the relationship between municipal councils and the Government? Mohammed Imraz Janif Natabua, Lautoka