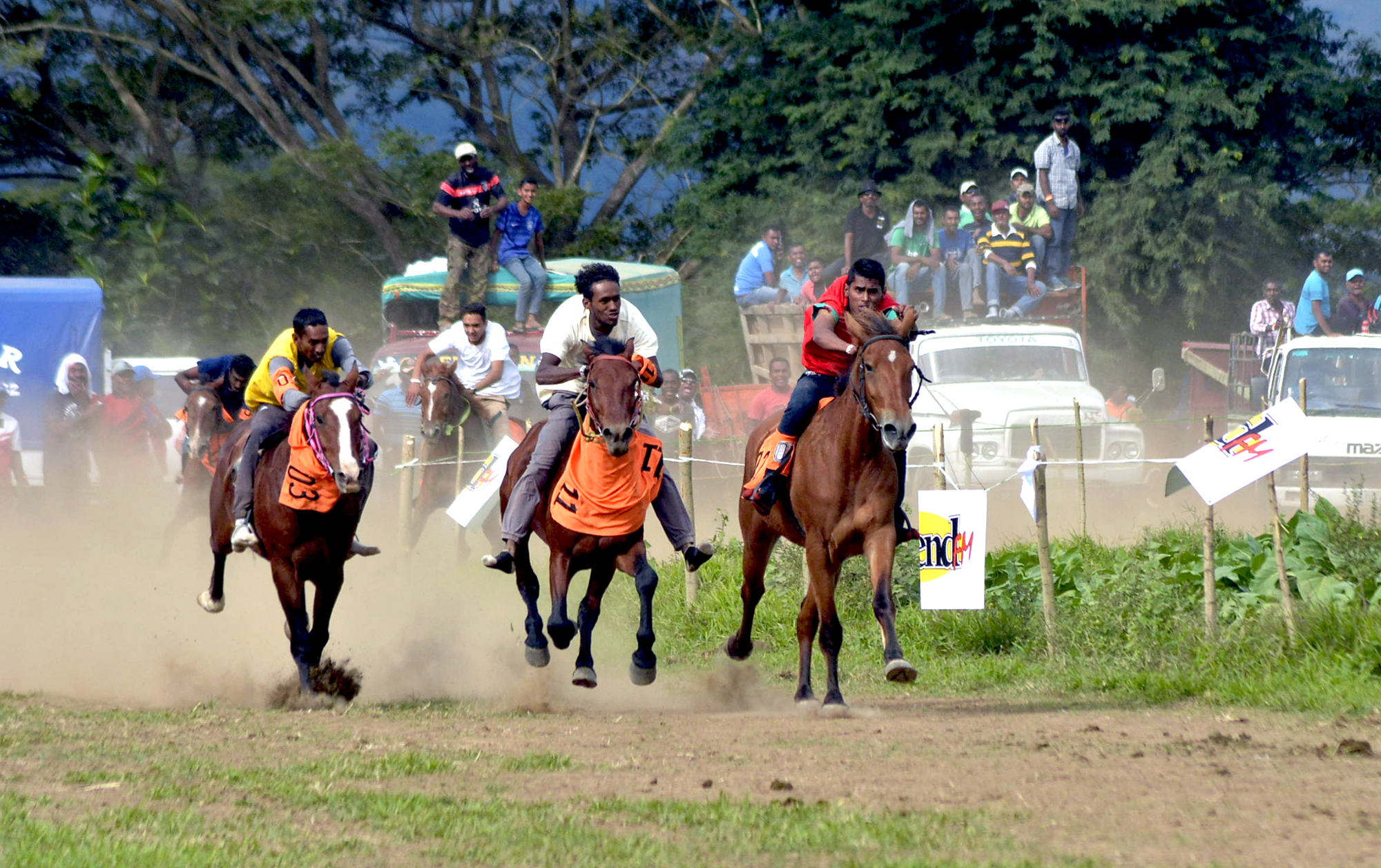 THANKS to The Fiji Times, fans will converge in Sabeto, Nadi to witness an exciting round of horse-racing. I’m thankful to the corporate sponsors who stepped in to make the event happen, which should be a great source of fun and community pride. I witnessed horseracing in Bua and I was thrilled by the vigour and enthusiasm shown by the community and I’m sure Saturday will bring out the best from our horses and their jockeys. Once again vinaka vakalevu to The Fiji Times and the corporate sponsors. RAJNESH ISHWAR LINGAM Nadawa, Nasinu

THE new road from Nausori to Nakasi has some features I find very difficult to understand. Firstly, for people living on the Davuilevu side, when hiring a taxi from Nausori, I believe one will have to make a run to the Lokia road roundabout and then to their homes in the Davuilevu area. This, I believe also applies to the people living in Koronivia and beyond. You will have to fork out more money for taxi fares. Secondly, to get to the bus stops from the opposite side, you might have to walk a bit to get to the other side. If there are openings on the fences for pedestrians, I believe it will be every dangerous because you will be crossing four lanes to get across. If the Fiji Roads Authority has a better way of addressing the above issue, it will be very much appreciated. TOMASI BOGINISO Nasinu

IT is very encouraging to take note that the Land Transport Authority (LTA) has plans to introduce the concept of urban clearways in urban centres (FT, June 27, 2019). I believe this will surely prevent or reduce the usage of road facilities as if it belongs to the drivers personally. They park, stop to drop/pick up passengers anywhere at their will. I hope this concept is inclusive and will deal with these issues as well as address drivers who break the queue and join the same queue a few metres ahead. I believe some drivers nowadays are very tactful and cunning so I hope those habitual bad drivers will be put where they belong. Traffic congestions are a challenge to health and safety which needs innovative programs to be effective continuously. Good on you LTA for assisting a financially–stricken bus company. Way forward. DHIRENDRA PRASAD Lautoka

YES, it may not have the snappiest title but the International Day Against Drug Abuse and Illicit Trafficking is a key plank in the United Nations war on drugs. Each year on June 26, International Day Against Drug Abuse and Illicit Trafficking is observed. It was declared by the General Assembly of the United Nations as a day to strengthen the action against drug trafficking and also to seek co-operation to achieve its aim of an international society free of illicit drugs. Substance abuse and the illicit trafficking of drugs is an evil in our society and disorientation among a majority of the youth. Drug trafficking is an industry working generally on a vicious cycle of manufactured demand and then supply. I believe streets of cities and towns in Fiji are in the limelight with drug peddlers who sell or expose drugs as we read in the dailies and police are doing their best but we need to change the mindset of our young youths and educate proactive citizens. The 21st century with its greater communication and technical skill has also enabled a greater dissemination of the cause of anti drug abuse worldwide. Also thanking our brave officers who keep our borders in control despite all odds. Vinaka. NEELZ SINGH Lami

NATIONAL soccer coach Christophe Gamel is sulking at the Pacific Games soccer format. I like the format, and I am delighted just thinking about what Fiji will be able to do about it. In the Pacific Games, I believe only a few soccer matches are really tough matches, by Pacific standards. Gamel probably knows that his team is not up to scratch and may not finish top of the pool. Now the good thing is that Fiji must finish at the top, and Gamel can’t hide. I believe he is already trying to hide behind the “format” excuse. Areh, Gamel, train your team. Go hard. Teams coming second in their pools are sometimes way inferior in quality than pool toppers but get to play quarters or semis and those are bore-fests. Pool toppers battle it out and that is going to be a
fight. Again, Gamel, step up, or step out, please. We are already competing with mostly minnows of soccer. But for Gamel’s team, it seems each opponent is a potential banana skin. DONALD SINGH Lautoka

EVERY rubbish day in my area, dogs of all pedigree can be seen on the road. They are attracted to the rubbish and will tear up
the ones in plastic bags. Of course they are hungry. At some homes I have noticed that every time rubbish is out, the dogs tear
the bags. When the rubbish collectors come they do a job of picking up and cleaning all the rubbish. Thank you guys. Now may I ask if the rubbish collectors could note down the house numbers and let the Lautoka City Council know so that they can have a talk with the owners, give them a warning letter and if it keeps happening, they get fined. It’s been happening for too long and it’s attracting the stray dogs to our area. Remember hungry dogs can be vicious. ALLEN LOCKINGTON Waiyavi, Lautoka

A LOT of messages are being circulated around the nation by guests at school-based functions related to drugs and substance abuse and the effects of the same on our young generation. I concur with the proposers of child preparation within the family unit in terms of discipline and ethical living. One must take note that there is another lifestyle which is much better and fulfilling than the criminalistic way of life. It is only through good parenting the essence of good practices in life can be instilled in the young generation. Keeping them busy with technological gadgets while one is busy with “other” work is impeding the development of the child in terms of good discipline and human values. I presume that the co-ordinators of such programs do evaluate the impact of such activities in the community. Adults should also be subjected through such programs, of course, at another level. All parents must be obligated to provide the status of their parenting through the capturing of the quality and standards of their children to a department which is vigilant on such issues unlike some which should be involved heavily but is seemingly sleeping without notification when they will wake up. I salute this initiative but propose that an impact assessment be carried out continuously to assist our children in their way to adulthood. God bless our nation with good parents and blessed children. By the way, schools should have a budget for such programs and should not burden children for related expenses. DHIRENDRA PRASAD Lautoka

WHY, oh why, despite all the warnings, statistics and appeals, our road death toll mounts, ever so steadily? Speeding and dangerous driving continue unabated? Again, why? Obviously, the alarming messages are just not “getting through.”Arrogance is definitely taking its stand. Too many “numb skulls?” With almost 48 years of driving experience, I must now conclude, the time is now right for both the Land Transport Authority and Fiji Police Force to carry out timely networking and proceed to very early beginnings of every driver. Driving school! What really happens from issuance of learner’s permit, sitting driving lessons (both theory and practical), to passing both; issuance of driver’s licence and closely monitoring provisional plate for the specified duration. Something is definitely and seriously wrong with so many repeat offending drivers. I believe the system is just not working. Generally, I believe most repeat offending drivers are younger ones, below 40 years of age. I believe there are some who are better, law-abiding drivers. Again, respectfully, broadly thinking well outside the box, here’s a radical suggestion, many will disagree, LTA run driving schools themselves. All hell will break loose with this suggestion, offered freely, out of greatest concern, to ease road death stats, speeding and dangerous driving. Am I wrong? RONNIE CHANG Nadi

GREAT news by India’s High Commissioner to Fiji that 100 scholarships are currently available for Fijian students. A very encouraging offer and students are urged to take up the opportunity and apply for the scholarship. For those who have been unfortunate in getting scholarships or are still trying to obtain a scholarship, I believe this is the opportunity for you. The Fiji–India relationship seems to be working well. Vinaka India. TOMASI BOGINISO Nasinu

WE are all proud of our new Nadi International Airport and I would like to thank our Government and ATS (Air Terminal Services (Fiji) Ltd) for the renovations. I read that there are plans to start the second stage of the renovations very soon and obviously we expect much better facilities in time to come. I hope that this includes passport scanners so that we do not have to fill the departure forms and provisions for A380 aircraft which are double deckers. Also, passport scanners on arrival will help to avoid the big lines at the Customs. Once again thank you ATS for the job well done. NARDEO MISHRA Suva

YOU can be charged for possession of illegal drugs. What about if someone is high on drugs? Is there a charge? ALLEN LOCKINGTON Waiyavi, Lautoka

Doing too many things

FOR a small country such as Fiji, doing too many things at once can be detrimental economically. MOHAMMED IMRAZ JANIF Natabua, Lautoka

THE Japanese government funded a footbridge for the village of Visama in Nakelo, Tailevu for better access to their farms and to nearby settlement. After numerous requests, the Japanese government finally decided to fund a bridge for them. With a funding of about $150,000 by Japan, the villagers performed a full traditional opening ceremony for the Japanese ambassador. The bridge will help the villagers of Visama in so many ways. TOMASI NOGINISO Nasinu