Letters to the Editor – June 26 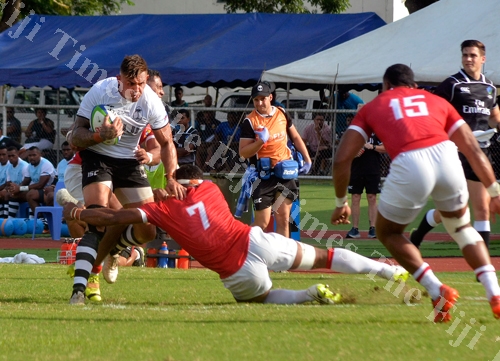 FIJI played a good game against Tonga.
It was interesting enough and well we missed a few tries as well which would have given us the game.
But that’s how games go when mistakes are made and so on and so forth like not catching the ball properly and all.
So in reality too many lost forward balls which cost us that game.
A good game anyway and all thanks to a brave performance by our Flying Fijians.
You all played well even though it did not come up well on the points chart.
Vinaka boys, toso tu ga!
All credit to the Tongan team for their brave efforts and coming out winners in the end.
All the best to you guys down the road. For Fiji.
Cheers guys, the PNC remains here for the fourth time so keep-up the moves and the world is our “oyster”. RICHARD M. ABEL, Suva.

Private school
HOW can a private property be altered to a commercial operation in the form of a private school for 100 students right in the middle of residential properties.
Education is important, this proposed school will be for a preferred few.
The city council had earlier advised that the proposal was on the floor.
We are told that the council had rejected the idea yet the developers have told us of a meeting to be held on Wednesday to show us what will happen.
Is this what transparency is all about? DERIK RAWLINSON, Namadi, Suva

Elect mayors
I FULLY agree with Fijians who want elected mayors to govern municipal councils as opposed to one elected by government (FT 23/6).
I believe the views expressed by the Tebbutt-Times poll reflects intentions for democracy yet things are done for us like it or not.
Since councillors are elected, will have no political patronage but rate payers who they represent.
I believe they have the power to hire and fire sub-standard employees.
For ratepayers this is democratically elected government.
Most of our people live in council areas and this is welcome news.
AMENATAVE YACONISAU, Palm Drive, Delainavesi.

Road conditions
I BELIEVE road conditions have worsened despite repairs done by contractors especially on the Kings Rd.
The FRA needs to monitor and check on the road repairs done by the local contractors.
The budget spent on road repairs is enormous but I am not seeing the changes.
Some contractors in the Tavua area have graded the road and put gravel with big stones.
Passing vehicles do not slow down and this result in the stones damaging vehicles.
I have had my car windscreen damaged this way.
I hope that the FRA looks at these issues seriously as we are paying for the cost of damage.
Hopefully the FRA and contractors do the responsible thing with the taxpayers’ money.
VINEET CHAND, Rakiraki.

Juice seller
MY mate sells juice at the Lautoka market.
He called me yesterday to say that when the notice was sent to market vendors he called home for his children to fill drums and bottles.They did.
His plan was to mix juice ready at home and take it down in carriers.
Just when he was preparing to do so, his grandson calls out, “Sa on tale na wai!”
Now he has bottles and drums of water all over his house.He said that he will keep it for the next water cut and he hopes it will happen soon.
ALLEN LOCKINGTON, Kava Place, Waiyavi, Lautoka.

Housing project
I BELIEVE a new low-cost housing is being built in Simla, Lautoka.
All my friend’s cassava plantation was graded for the development. We all know that all development comes at a cost.
The sad thing was the resident of Simla low-cost housing was not notified to pull the cassava.
Imagine all the good cassava wasted.
JOHN BROWN, Drasa Vitogo, Lautoka.

Sports has the power
“SPORTS has the power to bring people together regardless of their background, status and origin because sports transcends differences, its inherent social nature is a powerful tool and has the platform to engage vulnerable groups.”
Ana Madigibuli coined the article titled “Sports has the power” (FT 25/06) well with her choice of words.
The article quoting the likes of our president and Sports Minister and Assistant Sports Minister during the Pacific Research Symposium on Sports and Sustainable Development elaborated on the importance of sports.
Readers in Fiji and overseas know well the impact sports has on the economy and people sports unites and brings people together.
From the huge reception that our Fijian rugby 7s players received at Nadi International Airport when they brought home three titles from Hong Kong and the Melrose Cup for the first time to our shores to the huge celebration held when Fiji won gold at the Olympics signifies the importance of sports in putting Fiji on the world map.
The president correctly pointed out that the success of the Fijian rugby 7s team at the Olympics was not merely a sporting achievement for Fiji, but served as a source of inspiration for Pacific Islanders.
This Friday is dedicated to sports and I am sure that people will reflect on the importance of sports towards our wellness and in keeping us fit and healthy.
Sports should be used by national leaders to unite people and get our youths into worthwhile activities to reduce youth related problems.
Indeed, sports help create peace and promotes tolerance and respect.
Once again, thank you Ana and The Fiji Times for the wonderful article.
Such articles are worth reading!
RAJNESH ISHWAR LINGAM, Nadawa, Nasinu.

Road accidents
We have heard about at least two fatal road accidents in the news.
I believe the attitude of some drivers need to change to safety for themselves and the passengers in their vehicles. Drivers need to follow simple road rules and show courtesy while on the roads.
The road is not owned by the few drivers who seem to think that they are above everyone else and that the law does not apply to them.
We see buses driving at 100 km/h and stopping in the middle of the road without any signals. Buses need to be monitored by LTA and police.
We hear of drivers who are too tired to drive but take the chance anyway and end having accidents.
No matter how many police and LTA patrols are on the roads I believe there will still be accidents if the attitude of drivers do not change.
Drivers please remember that the lives of the passengers are in your hands. It’s better to arrive a bit late than be dead.
Vineet Chand, Rakiraki

Down memory lane
I remember when we used to live in Veisari and going to the movies to what we called the rubbish hall in the next settlement was something to look forward to.
Rubbish hall because it was made of coconut leaves and para grass.
The cost was 10 cents for adults and five cents for children.
The movies were played via a projector that sourced power from a generator.
And it was always a triple feature on Friday nights.
It had a mud floor and everyone had to bring their own mat or cardboard to sit on.
Movies where Johnny Weissmuller acted as Tarzan of the Apes, Peter Cushing, Christopher Lee acted in the Dracula movies.
Clint Eastwood was main boy in the cowboy movies.
Whenever there was a fist fight the whole crowd watching would jump and scream with delight and of course in those days the bad guy never had a chance.
When there was a love scene some of us vomited. (Well almost — how time has changed, sex was never ever in our minds)
When we walked to the next settlement which was 45 minutes walking we would joke and the road was gravel all the way and the night darker than black.
Cars would come by every 30 minutes and it was always a delight to see one.
When we would return after midnight the 20 or so of us would be huddled with everyone trying to get in the middle, that’s when we watched three dracula movies.
Then we would do it all again come the next weekend.
There were times when we sold pandanas leaves to get 20 cents to pay for our movie.
We would pick guavas and sit by the roadside and sell buckets full for five cents a bucket.
Oh how I love those days, no shoes all looking grubby but we were in heaven on Friday nights.
If someone found a coconut, that was our snack — no popcorn or juice.
Some of the bigger boys would climb for green coconuts and we used the stem of the paragrass for straws.
There were no plastic straws or plastic drink bottles around then.
When I look back I know we were rich.
If someone says that we were poor, we didn’t know what poor was.
Allen Lockington, Kava Place, Waiyavi, Lautoka