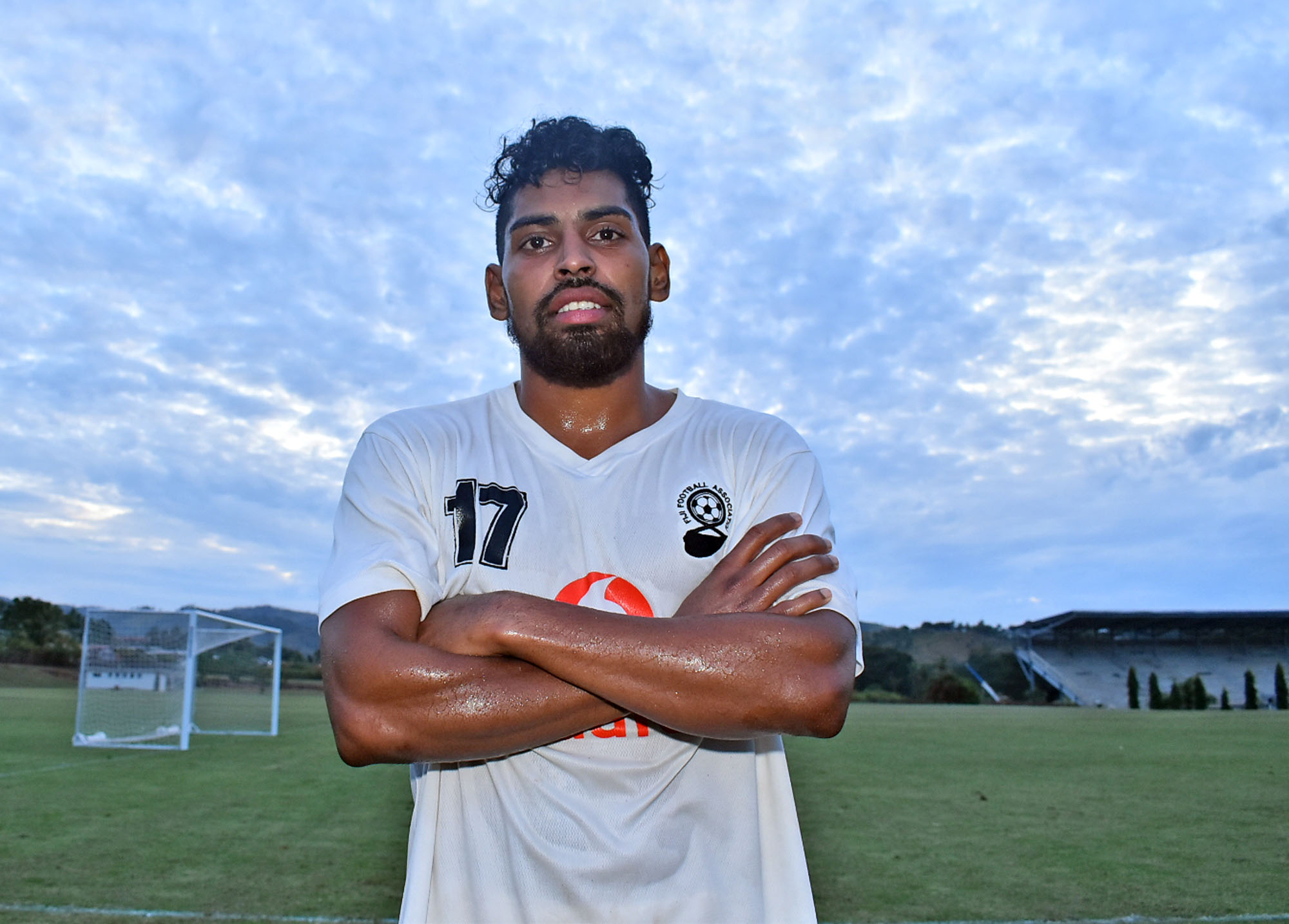 Roy Krishna after the team training session with the Fiji Football team at the BA Academy grounds in Ba yesterday. Picture: BALJEET SINGH

ROY deserves to be Fiji’s flag bearer at this year’s Pacific Games. Roy’s fans were in a jubilant mood when he walked away with numerous awards at the A-League and club Wellington Phoenix’s awards night. Then fans were shocked that Roy had signed a lucrative deal with India-based ATK football club. Good news followed this week as our star footballer was chosen to be Fiji’s flag-bearer to the Pacific Games and I’m sure that Roy’s success will motivate our athletes to do well in Samoa!

ON Friday night the well-oiled Crusaders machine steamrolled past the Highlanders (38-14) and recorded 21 unanswered points in the second half to book a home semi-final. On Saturday the hosts and the ever-improving Jaguares upset the Chiefs (21-16) with two scintillating tries to Matera and Moroni and made their first semi-final. The Brumbies also smashed the Sharks (38-13) to reach the semis while the Hurricanes battled past the Bulls (35-28) to make the last four. This weekend the Crusaders will face the Hurricanes in an all-NZ mouth-watering affair while the Jaguares host the Brumbies. I pick the Crusaders and Jaguares for the final. It’s going to be a treat as fans wait for a rugby blast this weekend. Unfortunately teams from the NZ conference had to battle each other in the quarters and semis. My best wishes to the Crusaders to beat fellow NZ side the ‘Canes! RAJNESH ISHWAR LINGAM Nadawa, Nasinu

THE Fiji Times (22/6/19, P2) reported the proceedings on the 2019-2020 budget debate. That Saturday copy printed ‘State allowed to borrow’. We, the readers have been following the parliamentary debate through our dailies, TV and radios. The Minister of Economy, Aiyaz Sayed-Khaiyum, responded to Professor Biman Prasad’s critic of the budget and the borrowing. Indeed, the debate was constructive throughout the week. The minister’s reply caught the attention of readers like myself: “just because someone had an economic degree doesn’t mean he or she was a sound economic person.” Undoubtedly, good degree interlaces with sound, intelligent and talented persons in his/her field of study. And with it are reputations and experience gained over the years through hard work. Qualifications, degree, reputation and experience will remain the high-water mark of high public postings and vacancies. That is what education is all about. I owe my degree to the university that enhances it. I regard that university with integrity, class and quality. I stand with it. When I am attacked with such minded-views, I also stand to defend myself, in the context of the institution that enabled my learning. What makes Prof. Biman a sharp-eyed economist is the economic degree, experience and reputation he achieved over the years. The institutions that he taught and worked in over the years will testify to this reality. His students are his living witness in Fiji and abroad. A good guitarist must first master the art of playing guitar. To think otherwise is the impossible scenario of trying to blend oil and water. It is just too good to be true. Anyway, thanks for the debate. Instead of choosing to remain silent, the people of Fiji could use “debates” as a framework to scrutinise important issues in a two-way conversational mode. SAVENACA VUETANAVANUA Veiuto, Nasese, Suva

My take on floats

Once again I read (FT 24/6) about rubbish left behind by people who went to a carnival, this time the Farmers Carnival in Lautoka. It was disgusting. I for one know that its the Farmers Carnival committee that is responsible for the carnival — including the cleaning of the rubbish, not the city council. Like I mentioned before, the Lautoka City Council was seen doing the cleaning. Rubbish bins were full to overloaded and started to spill over. Of course people could be seen leaving their lunch wrappers where they sat and ate. Wind then blew the rubbish all over the place. The Farmers Carnival committee may have hired contractors to do the cleaning but it seems they had not done what they were required to do. We were chair of COP23. Did this privilege trickle down to the people? No. Now let’s do some vigorous awareness so that the people can be more responsible. By the way, can the Ministry of Environment charge someone please! Allen Lockington Kava Place, Waiyavi, Lautoka

Sadly, and ever-so-sadly, the mounds of rubbish/trash following the aftermath of the Farmers Carnival in Lautoka is clearly indicative of the many members of our community who lack civic pride and are badly in need of education pertaining to environment protection, cleanliness and hygiene (FT 24/06). Much work needs to be done with great urgency to bring desired levels of civic pride. All carnivals and festivals have a general tendency to leave behind mounds of rubbish for our fellow mankind to clean. A real sad and cold hard truth of how environmental degradation rears its ugly form. There is much work for all carnival/festival organisers to ponder over plus massive headaches for the Ministry of Environment; public health; municipal councils; Occupational Health & Safety and the like. Respectfully, some bad practices must be properly addressed again. Mere “dos and dont’s” and laid down penalties on their own are grossly inadequate. Enforcement, in its strongest possible terms, is extremely vital now…..more than ever before. More CCTV cameras are needed at all carnivals/festivals, please. Rubbish perpetrators must be dealt with expeditiously …. and appropriately. Ronnie Chang Nadi

The CEO of Lautoka City Council’s statement where he says that the people of Lautoka don’t have civic pride cannot go unchallenged. The CEO of LCC should take the organisers of the Farmers Carnival to task for not cleaning the grounds every day. The festival started well but unfortunately, I believe the organisers didn’t think about the environmental impact. From Thursday night, the rubbish bins were hardly emptied and I hardly saw litter enforcement officers at the grounds. By the way, does the LCC have litter enforcement officers? Saturday at 10am, I saw the LCC workers cleaning and emptying the rubbish bins but by midday when the families came to the grounds with kids, they were greeted by rubbish. I also saw the organisers partied the night away at a particular club in Lautoka on Saturday night leaving all the rubbish behind and blaming the people for littering. It seems to me that the festival organisers are more keen to make money. John Brown Drasa Vitogo, Lautoka

No matter how much money is allocated for the fight against non-communicable diseases (NCDs), it will have no effect until people accept that it is a fatal issue and life cannot be guaranteed to be long. Mohammed Imraz Janif Natabua, Lautoka

Reassuring (FT 11/06) the permanent secretary promising teachers that the pay increase which they were supposed to receive in August last year will be paid sometimes this year after assessments are completed. Dan Urai Lautoka

Oh my goodness, did I read that report (FT 10/06) right, that teacher-student relationships are a common report with the Education Ministry? We have the problem with wayward and indisciplined students, now this. Now, I know elephants can fly. Allen Lockington Kava Place, Waiyavi, Lautoka

A public notice printed in the Fiji Sun had this — “We are also yesterday and today publishing in the print and e-editions the advertisements which were left out”. What did they mean? By the way, I don’t buy this paper. Several copies are delivered for free to the institution where I work. Kiniviliame Keteca Nausori

There is a soccer liftout in The Fiji Times every week. Early this month coverage was dominated by “Mom and Pop League” from various centres. This program is in the name of developing soccer in Fiji from the grassroots level. May I enquire what happened to the previous grassroots level development program which was called “Just Play”? Mohammed Imraz Janif Natabua, Lautoka