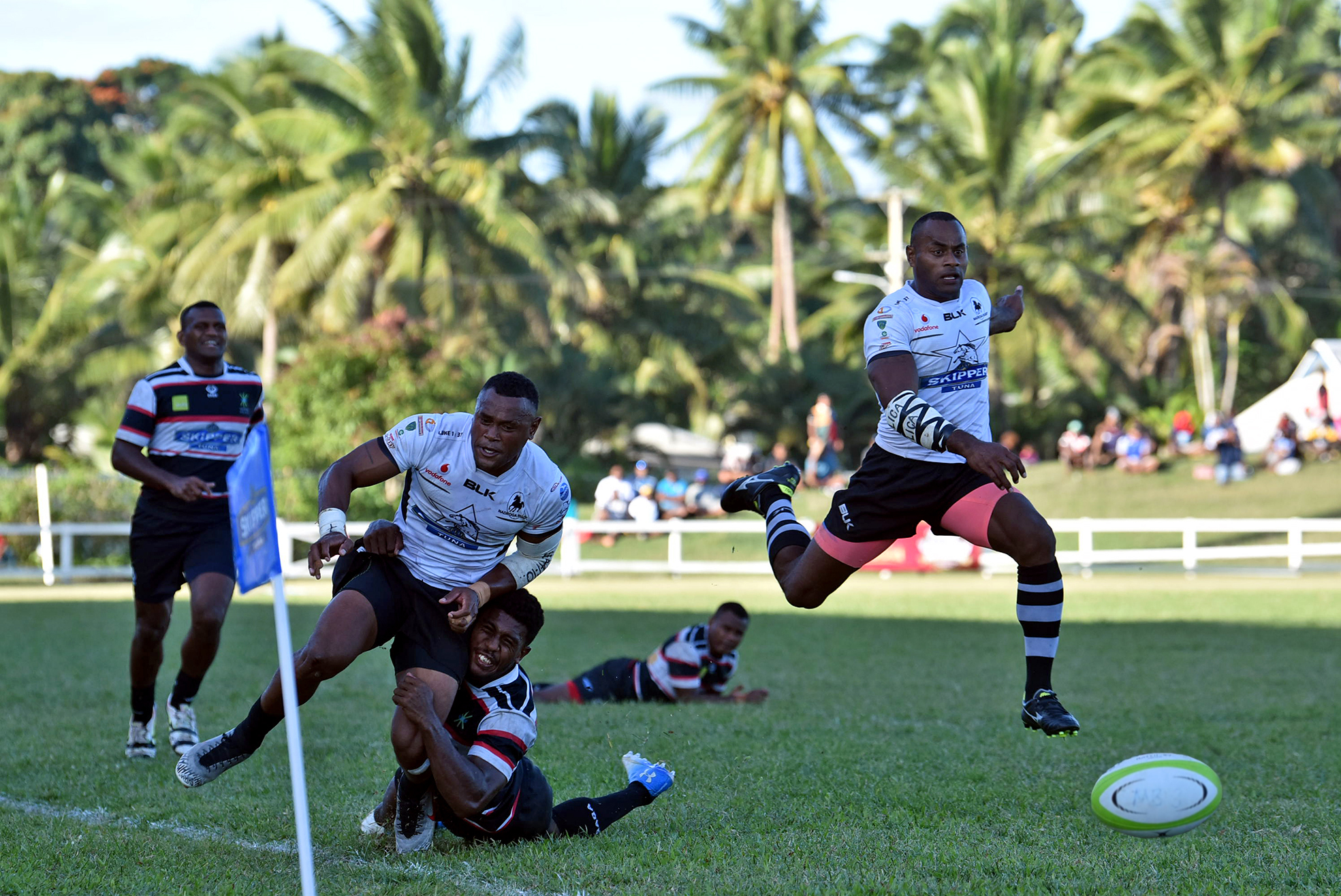 “We will rise!” This was the message from the traditional giants of Fiji rugby as they prepared to wrestle the prestigious Skipper Cup from Suva. Last year Suva shocked the Stallions at Lawaqa Park, launched a ferocious attack and brought home the coveted silverware. Current Stallion Kurumudu had then scored a thrilling try to break Nadroga hearts as Suva came out firing (36-35). This year in round 2, Suva had a walk in the park against the Stallions and won comfortably (34-16). In the semi-finals played last week Nadroga escaped Naitasiri’s clutches and won (33-31) while Suva outmuscled Nadi (39-15). The Stallions have big names in Sauvoli, Navuma, Somoca, Nasiga, Aca Simolo, Gavidi, Tovilevu, Nakalevu, Lutumailagi, Nasilasila, Salawaqavuka, Navori, Kurumudu and Vucago while Suva will play without Naulago, Stewart, Malele, Seru, Raidre, Mawi, Dolokoto and Tagi but Solo Nute will look up to the likes of Delana, Naqali, Matawalu, Vota, Ledua and Makutu to carry the baptism of fire. Nadro captain Sakiusa Nakalevu leads the quest to bring back the lost glory to Nakuruvakarua and I’m sure that the Skipper Cup will rest in Nadroga. I conclude with the words of our sports journalist Mike, “A horse gallops with his lungs, perseveres with his heart, and wins with his character”. These words are sure to settle scores and hype the boys to face the crunching test. Hakwa Nadro hakwa! Rajnesh Ishwar Lingam Nadawa, Nasinu

Do we have any idea if the unusual clean-up campaign which commenced in December 2006 is over or continuing? Was there a plan and set targets? If it is still in progress, what is left to be cleaned up and when will it finish? What has been cleaned up so far? I enquire because we have never been specifically and formally informed about this matter. This is such an important issue which concerns the nation and people should be updated regularly. Mohammed Imraz Janif Natabua, Lautoka

I wonder if the manufacturers of the detergent Boom are thinking of asking for some payment for the use of their product in a political activity. Just saying nah! Allen Lockington Kava Place, Waiyavi, Lautoka

Our main cup competition needs a professional approach, especially having more games. Either increase the team to 10 or 12, or have two rounds in the present setup. Players need more game time and the two teams promoted only played seven games, are then demoted to second grade. Fans and supporters had watched only half their teams’ games unless travelling to watch the away matches, having two rounds would allow the fans to watch all teams. For teams will improve in their second game if they lose their first match. The competition will also be more competitive and will help the players very much in skills and performance wise. Another important issue is players called in for national duties, when the Fijian Latui team was selected. Naitasiri and Namosi teams faced heavy defeats because most of their players were selected in the Latui team for the global rapid rugby. Either have equal number of players selected from each team or set up the rugby calendar to cater for all rugby competitions. For the betterment of rugby, hopefully some input would probably help the game. Tomasi Boginiso Nasinu

There has been a minimum wage in place for a number of years. Can the Minister for Economy please impose a maximum wage level also. Make it so that it does not exceed 20 times the minimum wage rate. As it is now the top people have been giving themselves inflated salaries with hardly anything to show for it. It is time to initiate effective austerity measures, so let’s start with trimming the salaries. We can use the savings to start repaying our debts. Let’s trial it with the civil service beginning with the PM, Cabinet and every government employees. Gabriel Simpson Manipur

Wilfully careless and dangerous drivers who have absolutely total disregard of road traffic laws/rules, if caught, running traffic red lights, must have an immediate suspension of their driver’s licence. No ifs, no buts, no mercy, 90 days from date of issuance of traffic infringement notice. I believe drivers are taking full advantage of bureaucratic processing delays and leniency in holding offenders responsible, without any mercy. LTA CEO, please enforce as soon as practically possible. All road users must survive without such recklessly dangerous drivers. I am positive our traffic law enforcement officers, being human, are simply getting fed-up of the huge volume of daily offences. Ronnie Chang Nadi

The energetic, foresighted and passionate Filipe Bole is unfortunately no more but his legacy will certainly live on forever. A simple man with a heart full of love for his country and people. A man always on the move, keen to lend an ear to concerns, a great mentor, guiding people with his wealth of experience, never missed a beat with his sharp memory, disciplined with an eye for detail but never shy to share a few jokes in conversations nor short of any stories and sharing life experiences. Never turned down the opportunity to serve his country, a dedicated son of Fiji who left behind great lessons for all of us to learn. All these are hallmarks of a true statesman. Rest easy Mr Bole. Ranbeer Singh Manak Suva

I was saddened to hear about the demise of our former education minister Filipe Bole. At the age of 83, Mr Bole had a distinguished and illustrious career. He served as a member of the USP council and was our ambassador to the USA and UN before entering politics where he served as our education, foreign affairs, and youth and sports minister. He also served as Fiji’s deputy PM and served as education minister under the Bainimarama government. I had the privilege to meet the late Mr Bole when he toured John Wesley as he shared his humble beginnings and urged teachers to teach with passion and serve the children under their care with parental love. Mr Bole will be remembered for his dedication and vision. May his soul find solace! Rest in peace, Sir! Rajnesh Ishwar Lingam Nadawa, Nasinu

PIDF and the future

The recent debate on the merit of keeping PIDF and the arguments advanced by both honourable Tuisawau and honourable Sayed-Khaiyum require some comments. Indeed there was value in PIDF early on when Fiji was not welcome in the PIF family, and indeed the platforms the PIDF adopted at that stage were quite visionary. This culminated in the 2015 Suva Climate Change Declaration which really was instrumental in leading our campaign towards the Paris Agreement. Unfortunately that was the only legacy PIDF has to show. Over the past three years or so, all we got from PIDF was recycled tweets based on the globe-trotting crusade of the SG and his staff, funded by our taxpayers. PIDF tried to compete with the forum and others rather than work together. Whatever advantage PIDF had in terms of engagement with CSOs, business sector etc, have now been removed with PIFS recognising these deficiencies, and indeed following up with lot more meaningful actions. Just jumping on the bandwagon of climate change, blue green economy, oceans etc, without and technical knowledge, strategies and resources is not going to cut it for PIDF. Perhaps there is a need for a relook at how PIDF could function as a body. Malvin Chand Suva

Hats off to The Fiji Times for reporting what transpired during the 108th Session of the International Labour Conference in Geneva. Readers have a fair idea of what transpired in Geneva through The Fiji Times and I’m glad that Osea Cawaru has assured ILO “the State will commit to the resolutions”. Rajnesh Ishwar Lingam Nadawa, Nasinu

Speaking of the dog traps which authorities are implementing after the unfortunate incident in Nadi, one hopes that parts of Toorak are considered. There are a good number of dogs around such as Augustus and Johnson streets. These dogs are known to pounce on pedestrians. A number of pedestrians including children of at least two schools are known to pass through parts of Toorak including the famous Amy St. In addition, these dogs are making their way to compounds and freely passing their droppings which is rather an unpleasant surprise each morning. A blessed weekend but just be cautious when passing through parts of Toorak. Floyd Robinson Toorak, Suva

Isa my Fiji, back in the limelight for the wrong reason. Dan Urai Lautoka

My understanding was that the road user levy and wheel tax were supposed to be used in the maintenance and upkeep of road infrastructure including roadside fences, streetlights and also the road itself. But now I think I was wrong. RAHUL SHARMA Varadoli, Ba

Is there a cure for the foot in the mouth disease? Please let me know so I can recommend it to some people. Allen Lockington Kava Place, Waiyavi, Lautoka

Stray dogs need to be caught and then given out to people who may want to have them. Rural people, especially those from the highlands would dearly love to have those dogs as these are animals which have helped them to hunt for food and to guard properties. Whew! They would do anything to have those dogs. This is a much better alternative. Joeli Naleca Natabua, Lautoka

I believe the Opposition plays an important role in Parliament. Unfortunate that governments choose to ignore them. Dan Urai Lautoka