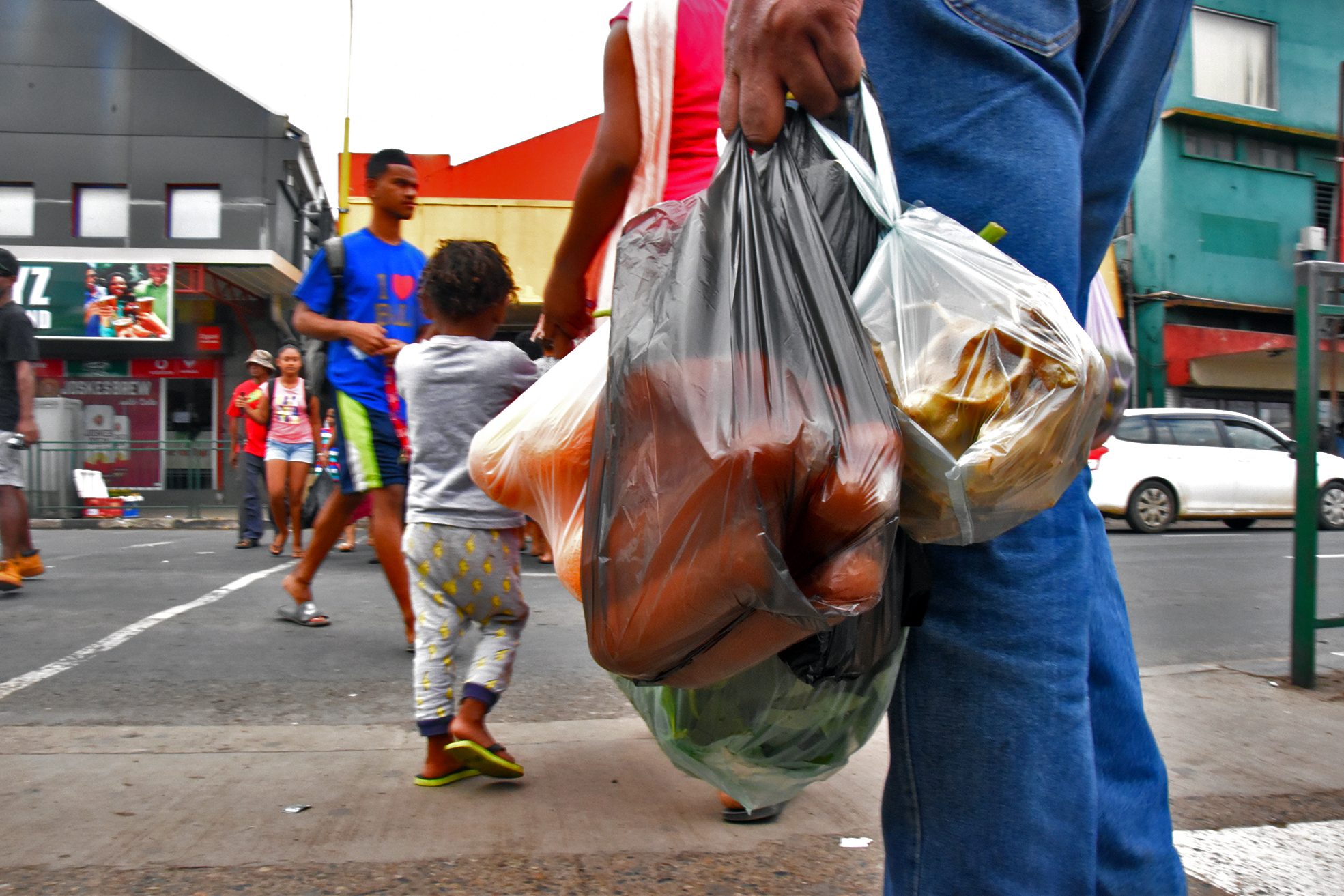 A writer feels we should have a total ban on the use of plastics as it poses real threat to our oceans and marine lives. Picture: Jovesa Naisua

After analysing the recent budget, I was quite pleased to realise the efforts by the Bainimarama Government in placing a higher levy on the purchase of plastics and also banning certain products in days to come. These have been an environment hazard for quite some time now. I was a bit confused over the fact that a levy was placed on major shopping centres on the use of plastics but in vegetable markets and other smaller shops it was quite accessible without any penalty. But I feel that we should have a total ban on the use of plastics as it poses a real threat to our oceans and marine lives. Even there should also be restrictions on the use of plastic bottles as it is a common littered item. Research has shown that plastics are quite deadly and every effort must be made to take good care of it. Probably the best solution would be to not have it in the country. We must not forget that if we continue to litter our oceans with plastic related products, it’s like opening a can of worms or opening the pandora’s box for our future generation. All we need to do is change our mindset as contributions by individuals are paramount towards tackling the issue of climate change and its implications. At least, we can help save our oceans, rivers, creeks free from plastics and other household garbage that some people are fond of discarding in these places. The many positives of the 2019-2020 budget is indeed praiseworthy as there has been serious plans and mechanisms being introduced to save our environment. Our vulnerability to climate change must always be in our minds and hearts. The plan to have our own recycling companies is again going to be a milestone achievement for our people as quite often we do not really show much compassion and care for the environment. Sometimes we just watch plastics flying from one area to another and disappearing in the oceans and rivers forever… such an eyesore. My plea to all fellow Fijians is to become true activist of our environment. A lot more planting of trees is also paramount towards sustainable development of natural resources. If we take good care of what nature has offered …I believe nature would take good care of us. Naveen Dutt Wainibokasi

ALLEN there is no such thing called a perfect budget (FT 13/6). It’s either a good budget or a bad budget. My description of a good budget is one that is development oriented, people focused and is aimed at narrowing the gap between the rich and the poor. In other words it should be pro-poor, targeted at improving the living standards, spurs economic growth, creates an environment conducive for higher level of tax compliance, and encourages people to be less dependent on handouts and become more productive. SELWA NANDAN Lautoka

The revelation that there had been 104 teen pregnancies in schools is shocking. Three cases in primary school? Oh my lord. We seriously have to relook at our values. We have churches at almost every street. Public services can be heard around the country, yet we have this. So, what is the solution? Allen Lockington Kava Place, Waiyavi, Lautoka

Alone with no power

Firstly, it’s always a pleasure to read your articles. I was scrolling through Facebook and read the story about Ram Devi the elderly women in Lautoka with no power and running water. It’s really sad to read these kinds of stories especially for those who have given so much to the nation. Even if it’s mundane tasks like cooking at home, raising children (which is not easy) and contributing to the economy by simply buying a school book. Just reading the plight of this woman I am moved to ask what can we do as a nation to assist her. I am not a rich man but would gladly contribute in order assist my fellow country women. So how does it work? Can an account be set up to assist Ram or what are some other avenues. Lastly of all, to all her children and relatives what comes around goes around. Peni Qalodamu Nakasi

A big thanks to the Lautoka Ratepayers Association and Lautoka City Council for planting trees at Vomo St beside the police barracks. I am so glad that the association has been working hard to clean up Lautoka. Can I challenge more towns to start planting trees too? John Brown Drasa Vitogo, Lautoka

World Cup and back line

Is there a reason for a local to be included as part of our national fifteens rugby team, especially in the back line? With all due respect, at the last World Cup it looked like our back line were trying to play a very structured style of play which they were not suited to. They were disrupted by our opponents who were easily reading our moves, proving frustrating for our fans. In a way, if this is a Fijian side then one expects Fijian rugby at its best as the Rugby World Cup comes once every four years. Even more, there are advantages in terms of language and understanding our players culturally. All in all, let’s support the Flying Fijians campaign to the World Cup and remain positive that we will play to our strength. Let’s not forget our flair, variation and off-loads. Meanwhile, our first Test will be against the Maori All Blacks next month. Floyd Robinson Toorak, Suva

I refer to the article in The Fiji Times (10/6) regarding abuse of foreign workers in our country. We are always concerned about our own people mistreated in countries like Australia and New Zealand but now we are doing the same. It is high time that a thorough investigation is carried out to find out how so many foreign nationals are working in the country when our own people can’t find employment. The Ministry of Employment and the Immigration Department should be investigated too to find out how and why they issued the work permit and visa respectively. For me it looks like just the tip of the iceberg. Nardeo Mishra

Despite losing to heavyweights France, Argentina and Wales I believe that the performance of our young ruggers must be commended. Many of our boys travelled to Argentina for the first time and then had to get used to the weather and time difference. Playing miles away from home the boys were given a nightmare as they faced defending champions France and fought bravely but went down 36-20. Our next opponent was Argentina and the Junior Pumas almost had a walk in the park with a resounding victory (41-14). Despite two loses hopes were high but then Wales crushed our hopes with an emphatic (44-28) win. From Fiji’s pool France and Argentina made it to the semis and face Africa and Argentina respectively while Wales will compete in the 5th to 8th place competition. Our boys play Georgia, who edged Scotland (17-12), and must win to remain in the top flight. On the other hand, it’s high time that our boys are exposed to high level of competition to match the standards of overseas teams and while players like Kuruvoli, Soqonawasaloa, Rasaku, Ramasibana, Natoga, Droasese, Sailo, Momo and Kuilamu stood out more efforts are needed to address our discipline as our opponents took advantage when we played with a player in the “bin”. Competition was tough and even the Junior All Blacks missed out on a semi-final spot. Thus, our boys have done well and with more exposure the boys should beat tier one nations. Vinaka vakalevu na qito boys! Rajnesh Ishwar Lingam Nadawa, Nasinu

I believe the problem of drugs, especially marijuana in the local scenario has escalated to such an extraordinary level because of the lack of enforcement which has resulted in the accessibility, availability and affordability of the substance. It is sold and distributed in the streets of Suva without fear through personally selling skills that has become a common knowledge to many people except the enforcement agencies. Last Saturday at about 3pm I was to pick up someone in Vatuwaqa and was parked in front of a line of shops when a youth who had blood shot eyes approached me by gently tapping on the window. I slightly lowered the window and was politely greeted by this person who offered me either a $10 or a $20 package which I understood later that he was referring to marijuana rolls. I was in a state of shock and refused his offer. He then thanked me and moved on. Within the 20 minutes I was parked there another two peddlers approached me in a very professional way and I assumed then the high class of salesmanship came through experience and the competition with the other suppliers within the vicinity. As I drove off I could still see the group approaching the other shoppers who came to the store. Another important fact was that there is a police post just around the corner that did not deter such illegal activities in the area. The new budget has allocated $800,000 to fund stronger effort to combat the drug networks of dealers and suppliers and I believe most of the resources will go towards the border control. With an increased strength in the enforcement agency in the last year or so together with a larger and a newer fleet of vehicles I do not see any tangible progress and this is a widespread problem along the Suva and Nausori corridor. Commissioner, are you reading me loud and clear sir? Satish Nakched Suva

Thank you EFL for the $9 dividend. Hasmukh Patel, I am still waiting for your reply on why you are not interested in using the Fiji Sugar Corporation electricity generating system all year round. Why don’t you and Mr Clark from FSC talk about it. Cheaper electricity will bring in more progress for the country. Sukha Singh Labasa

Venezuela has the largest oil reserve on Earth but today 90 per cent of Venezuelans are living below the poverty line and facing all the problems associated with it (ABC news 14/6). How has Venezuela come to be in this state? The short answer is bad political leadership in the country. Rajend Naidu Sydney, Australia

Lorry drivers want to overload their cane trucks despite the weight limit. They have shown their dislike. Solution — make them aware of all the issues that come with overloading, perhaps they will understand and heed the law. Allen Lockington Kava Place, Waiyavi, Lautoka

THE import duty on children’s garments has been cut by 27 per cent in the budget. How will the policing authority ascertain that the reduced price is applied to all post budget imports to ensure that the benefit is passed over to the consumers? On the same note, how can the people be assured that the price on pre-budget stocks of white goods are not increased because of the 10 per cent increase in duty. It has been found that whenever the duty goes up, the prices are increased immediately but not vice versa. SELWA NANDAN Lautoka

As long as they keep attacking the users, the battle to reduce drugs in this country remains futile. Dan Urai Lautoka

After getting beaten by 15th ranked Italy and being down 2-0 against 10th ranked Brazil, Australia (ranked 6th) came back to win 3-2 in a fairly evenly matched contest. Now that’s a good reason for Australians to be proud of their women’s soccer performance and for others in our region to draw inspiration from. Rajend Naidu Sydney, Australia