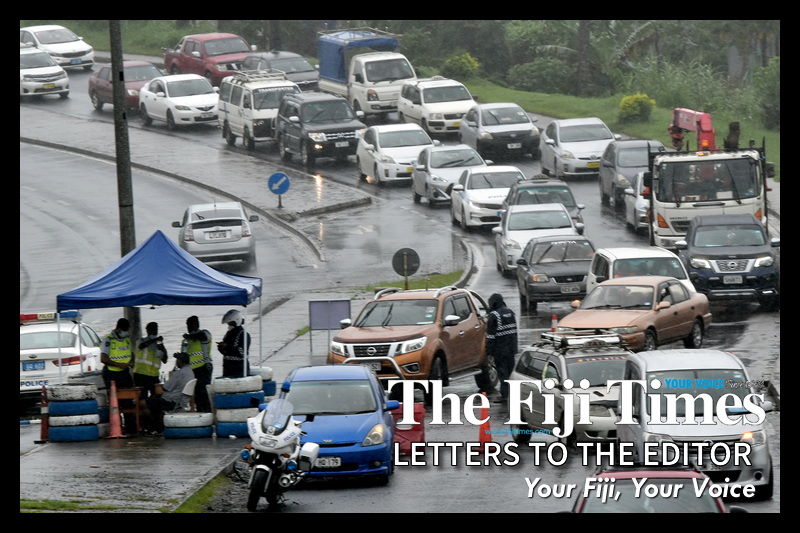 As per FT of June 9, many thanks and appreciation to Mohammed Khan for his kindness towards stray dogs. Your informative message for welfare of cats and dogs, where owners have neglected them, could be well addressed through Animal Fiji, Greater Good Foundation and SPCA. This simple message to control animals from being strayed and love for pets hopefully, will end animal torture. Also your message regarding the harsh cruelty to dogs being left to be fed with bare bones and physically tortured has tormented those who have love for these innocent beings. Furthernore, a beggar along Vitogo Pde in Lautoka not only buys food for her family but also for about 10 stray dogs near her home. A few days ago, a beautiful stray canine, wagging its tail from a distance approached this lady. The canine rested her head on the lady’s feet who gently petted her and told her lovingly there was nothing that morning and would wait for the supermarket to open. What name should I give to that lady who brought tears to my eyes? All I could do is spare some more money for the dogs. I know some day the lady would be rewarded for her mercy. SARITA LAL Malolo St, Lautoka

I was saddened to read that the residents of Muanikoso had to stage a peaceful protest to make their pleas and voices heard. The article on yesterday’s front page titled ‘Food rally’ by Luke Rawalai was touching. My team and I were there to distribute food packs on Tuesday when Sophie Ralulu and Luke Rawalai arrived to cover the story. I was touched by the words that were written on the placards and I felt sorry for the mothers and kids, as more than 200 placard-bearing residents rallied outside the police checkpoint to say that they were desperate for food. My team and I have been on the ground assisting families and residents of HART with food packs, and we could feel their pain and course, and I thank The Fiji Times for reaching out to the residents to cover their story. Thank you Sophie and Luke for the story on the residents of Muanikoso village! Thank you once again The Fiji Times for being the voice of the voiceless and the helpless! I also thank those Samaritans who reached these villagers. My daughter Mahika celebrated her birthday yesterday, and I had to cut down on some of her birthday expenses to prepare additional packs for needy families. Times are hard because of COVID-19, but Fijians need support! Rajnesh Ishwar Lingam Nadawa, Nasinu

Given the problems with traffic travelling into Suva City, would a simple solution be to designate days for either residents of certain areas or holders of certain vehicle registration numbers to travel. The LTA must have a database of registration numbers that could surely be sorted into vehicle owners addresses? Yesterday I had to travel to the city for urgent supplies including from the pharmacy — I returned home with very little because the traffic and the parking problems were just too horrendous — interesting when people are only supposed to travel for sensible reasons? I did of course notice a serious disregard for social distancing — what is it going to take for people to understand how serious the situation is? Val Salama Colo-I-Suva

Guaranteed, there is one remarkable thing which you have heard from fellow Fijians. It has been also mentioned by former residents returning for a get-together. It is near impossible to expect anyone in Fiji to be desperate for food. The shocking Muanikoso scenes challenge that belief. It is unbelievable. I think it’s an embarrassment which can’t end just at that. In my view, it had been building up to this. The struggle is real. If you are in touch with reality, you must be surely asking: “Are Fijian citizens facing a food crisis?” During election campaigns, politicians come up with all sorts of promises. Some are really wild ones. Promises aside, I wonder how will some of the current politicians face the people during rallies next year. If you think the gap between the rich and poor are becoming bigger, how is the gap between Fiji’s leaders and the common people faring? The silence is eerie. The voices we wait for are fading deeper into the cool nights. I think it’s high time we wake up, smell fresh lemongrass tea and taste the reality on the ground. Mohammed Imraz Janif Natabua, Lautoka

May I add my name to the list of those protesting against the removal of NHK and its replacement by the food program? At a time when so many are struggling even to put the most basic necessities on their plate it seems quite staggeringly insensitive to replace the excellent, informative and entertaining NHK with yet another irrelevant fancy foreign food program. Michael Scott Morris St, Lautoka

Medical ethics in a pandemic

Traditionally witchdoctors, shamans, apothecaries, physicians and eventually surgeons were highly regarded in society. Medical professionals above all others must maintain high individual morals and collective ethical stands. The Bolam principle of the 1950s was the gold-standard for medical professionals — “the reasonable doctor” was judged on this principle. However, that has been superseded by the “adjudication” standards for the ‘reasonable’ patient in question. Additionally, the “do no harm” — “Primmum Non Nocere” principle have been superseded by the rights of the “reasonable “individual. Human values on prochoice V prolife, the right to resuscitation and euthanasia has evolved some States, now rest with the individual. Medical ethical values are not cast in stone like the Ten Commandments. Ethics is in evolution. Today, we are faced with tasking individual morals and collective professional ethics in addressing a pandemic. The medical profession leadership must rise, provide political leadership with objective advice so needed in areas of public wellness, livelihood, food and security. The medical voice needs to be heard. Political leadership must comply not complicate. God bless Fiji if politics supersedes the medical ethical stand. NEIL SHARMA Bakshi St, Suva

At this time of serious health and economic crisis, the honourable Aiyaz Sayed-Khaiyum seems to be engaged in political point scoring without much evidence or telling the full story regarding those being attacked. Recently, he declared that the much needed humanitarian support by the NGO, FRIEND gained it political mileage when the grocery and food aid to families had nothing whatsoever to do with partisan politics. This baseless accusation was echoed by the prime minister who appears to be misinformed. Hon Mr Sayed-Khaiyum further claimed in Parliament that the reappointment of Professor Pal Ahluwalia was illegal and that his relocation to Samoa by the USP Council was against the Charter and Statutes of USP when the Council has sole and complete authority to appoint the vice chancellor, and the University Charter and Statutes are silent on where the VC should be located. It had become a convention for Fiji to host the VC on Laucala campus, the largest of USP’s 15 campuses. However, Fiji government’s gestapo style deportation of Professor Pal Ahluwalia and his wife, Sandy Price triggered an extraordinary situation. The USP Council has acted in a just manner and has maintained the university’s standing in the international community of scholars. Drawing attention to Duavata Initiative Ltd and maintaining that the law firm did a lot of work for SDL government was again misguided political point scoring. A partner in Munro Leys has clearly shown (Fiji Village 8/06) that her law firm did register the company ‘Duavata Initiative Ltd’ and did some work for SDL government but then Munro Leys has registered numerous other companies and done work for them. In Saturday’s The Fiji Times (5/06) the feature articles by former PM Mahendra Chaudhry, former Governor of Reserve Bank of Fiji Savenaca Narube, and Professor Wadan Narsey provide systematic and coherent analysis of Fiji’s critical economic situation, and the jeopardy that Fiji National Provident Fund may be in. They all point a finger at Hon Mr Sayed-Khaiyum for Fiji’s massive indebtedness, a problem that began well before the COVID-19 pandemic. FNPF’s loans to non-performing companies whose situation has been negatively affected by the pandemic have put the Fund at serious risk. The Hon Mr Sayed-Khaiyum is likely to better serve the country by attending to the matters raised by these prominent and well respected commentators. Professor Vijay Naidu Suva

With much delight, I am very much touched with the piece penned by Litia Cava for Turiva Qi. It’s a true recognition of someone being involved in a blue collar job. The contributions of these frontline workers who are mostly street sweepers and garbage collectors are not noticed by many. Being the essential ingredient of municipal workforce, they dare the sun, rain, hail or storm to keep the towns and cities clean. Without any distinction whatsoever, they brave themselves in the early hours of the day to carry out the cleaning tasks so those entering the towns have good impression of it. This makes our day more beautiful. Staying safe and healthy is my prayer for these unconditional frontliners. No one can take the skills and attributes from you. Others may be affected in this COVID turmoil but this employment will exist forever as long as mankind exists as it is not only essential but looked upon when it comes to cleanliness. Be strong Qi and I salute you and others for your perseverance and dedication. Rouhit Karan Singh President – FLGOA

With great haste and in a careless and/or senseless manner. Headless chooks. Be like nah? Manoj Lal Patel Drasa Ave, Lautoka

Reassuring the PM’s faith based surety. How many have taken him seriously? Dan Urai Lautoka

Even if school resumes which we do not know when, our students are behind in their academic studies. I would suggest with the support of other parents that there is no more room for extracurricular activities such as the Coca-Cola Games and Deans rugby. Our students need to focus on their studies and upcoming exams. Jioji M Cakacaka Tadra-Votualevu, Nadi

Just one lockdown effect and people are protesting. We are with you but have you ever protested for Westerners since they are fully locked from last year? Be a game changer to overcome this nightmare. Stay strong and safe. Jaheed Buksh Korolevu, Sigatoka

I READ in your newspaper of June 5 (2021) two very informative op-ed pieces. One was by Savenaca Narube and the other by Mahendra Chaudhry. Both touched upon the national debt relative to our GDP. I truly hope the two pieces are widely read and discussed by grassroots Fijians. Maybe our elected representatives can read it too. Once that is done, we can all contribute to an informed veitalanoa regarding the improved running of our one and only Fiji. SAILOSI BATIRATU Suva

TO the ones who are making videos scaring people with magnets sticking on to their shoulder and head, stop the nonsense. AREKI DAWAI Suva

How much does a bakery cost? We want to start one near the Owls Perch. (Smile, giggle). Allen Lockington Kava Place, Lautoka