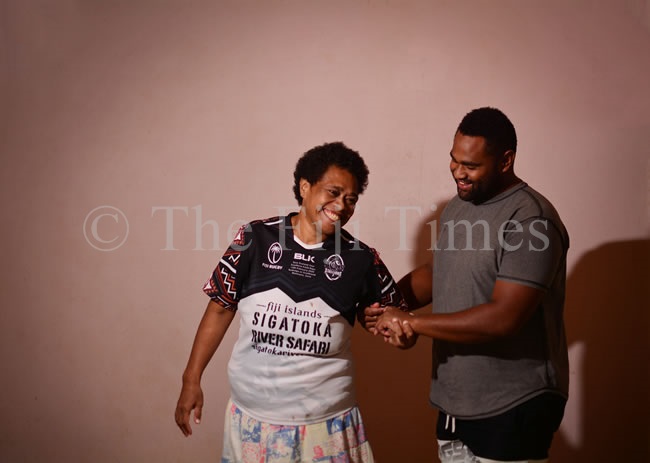 An emotional story about love

Powerful story in The Sunday Times, original and authentic, full of emotions, love, care and sacrifice. I shed tears silently while reading the story of my hero Tomasi Mara and his exceptional duties as a son, sharing and caring, living and breathing for his mother, virtually sacrificing his bright career. Who will do this today? Poetry in motion and a classic example of mana magic, only in Fiji. The most heart-wrenching part of this story is the separation when he was only four years old and reunion with his mother 15 years later, and the journey begun to look after her and do what any son should do for life. We have heard many stories of how parents who set out to look for their children when separated but this a unique and exotic story on a son’s journey to unite with his mother. Thank you Viti Times for another powerful reminder that Mother’s Day is just not once a year but every single day, hour, minute, and second. Joka dina na talanoa! Viti the way the world should see. Made in Viti, kaukauwa dina. Where else will you get a perfect start of the day – Viti Times! Shalwyn Prasad Mukta Ben Place, Nabua, Suva

Apt and in line

Yesterday’s editorial titled “Long tentacles of a pandemic” was apt and was in line with the heart-touching stories published on pages two and three. The editor-in-chief was to the point as he stated: “Far too many people are badly impacted by the pandemic. It tears at the heart reading about and actually seeing this harsh reality on the ground. The pandemic has turned lives upside down”. The stories that followed in yesterday’s The Fiji Times were heartbreaking but just as the editor-in-chief stated: “It is encouraging though that many Fijians are not sitting back waiting for handouts. Our challenge though, collectively as a nation, is to continue keeping the virus at bay. That means adhering to all safety rules. A second wave would make the tough life thousands are now living, a whole lot tougher”. I’d urge everyone to work together in an effort to get out of the negative impact of COVID-19. These are testing times and our unity to togetherness will help us fight the obstacles. Rajnesh Ishwar Lingam Nadawa, Nasinu

At the Global Summit on the Future of Work and COVID-19, Fiji Trades Union Congress secretary general, Felix Anthony, stated that states in the Asia-Pacific region must refrain from using the current COVID-19 crisis to weaken labour rights (FT 06/07). To say that all workers regardless of their contractual arrangements or employment status must enjoy fundamental workers’ rights is a rather unrealistic notion considering the economic disaster we’ve come to experience. No business, no revenue, no revenue –– no wage, no wage –– no jobs! No labour laws or rights can do anything about that. Labour rights means nothing in times like these. With such a crisis as COVID-19, one of the worst our world has experienced, I believe Mr Anthony’s expectations is not only unreasonable but impossible. Let’s not get trapped by false appearances but see the reality of the situation and what exists. The FTUC secretary general must learn to tailor his opinion to fit the situation. That’s the reality! Simon Hazelman Rava Estate, Savusavu

We are beginning our new school term after one of the longest breaks. It becomes imperative that we take account of the new normal era we are in. Our children need a lot of mentoring, understanding and careful handling. This begins from home and parents must take account of their feelings and concern for this new normalcy. The past patterns of schooling is history and the new brings in new dimensions to learning. To parents, teachers, school managements and all other stakeholders, please keep our children safe and free from any form of fear and social enigma. God bless our educators and children. Best wishes for the new term. Dhirendra Prasad Lautoka

I would like to thank John Kamea for his very informative article about the internal migration that the economic effects of COVID-19 is causing. It is easy to think of refugees as a problem for the Middle East and European countries. The reality is that here in our beloved Fiji we have domestic refugees bringing
similar problems of acceptance  and readjustment. Of course people in the village want to welcome
their relatives, but the practical realities mean there are some real difficulties as Kamea has highlighted.
The situation needs some innovative and practical ideas. Let us hope the Ministry of iTaukei Affairs with
some NGOs can fi nd solutions that will not just be a matter of dollars. TESSA MACKENZIE, Suva

MY very good neighbour Simon Hazelman of Savusavu says that I am being sarcastic in questioning
which government and which minister is or was in charge of the Lautoka swimming pool and construction of road humps. In his second paragraph he accepts that no government is perfect. Instead of
pointing it out we should help. Simon, you have jumped the gun mate! In your last paragraph you have accepted that no government can be perfect when its citizens are all imperfect. Don’t forget you are also one of the citizens. I was just asking an honest question so that it does not happen again. If a swimming
pool that started with $2 million, went up to about $6 million, and then a whopping $12 million, is all good in your eyes, then all good mate. SHARIF SHAH Savusavu

NINE public housing towers in Melbourne have been reportedly locked down and the officials there have ordered about 3000 residents to not leave their homes for any reason for at least five days. Hundreds of police officers have been deployed to monitor the strict quarantine, a first of its kind to be imposed in Australia during the pandemic outbreak. Public health officials have become increasingly alarmed by the outbreak in Melbourne although Australia’s total case count remains relatively small. About 200 new cases have emerged in and around the Melbourne city over the past two days, a growth rate which has not been seen since March. Let’s not rush to open our borders and let’s keep the existing health and safety measures intact to keep our country safe from the coronavirus. Our safety is in staying apart and indoors as much as possible. In the face of our dwindling economy, let’s not put more burden on the government coffers. I don’t think we are ready to lift all the COVID-19 related restrictions any time soon. Thank you. SURESH CHAND Nadi

THE latest COVID-19 case is the new normal while the world is dealing with the biggest pandemic in history. As the directives through government remain firm for returning Fijians as well as visitors, the Fijian people remain safe at large as long as all directives are put into effect as promised. Fijians at this point should let go of the panic and continue with the new normal. All new cases should be well managed through the new Ministry of Health measures. All Fijians must continue with their normal day-to-day activities with good hygiene practises at all times. All forms of education should continue to be prioritised and not be stopped with the new innovative techniques. Fijians in the country deserve to move around and continue their daily lives which they had previously put on hold for so many days. The new case should not in any way scale back the freedom of Fijians as this would be unfair to them as they have done their part. It’s time for relevant authorities to act up and institute a safer Fiji for all. Furthermore, since all Fijians in the country don’t have COVID-19, all those individuals being allowed back into the country should be isolated from ordinary Fijians. Hopefully, as per government directives, all those who have returned to Fiji in the past few days including the new patient had downloaded the careFiji app and actively used it to prompt safety of all those they come in contact with during their quarantine period. A suggestion I myself have is to increase quarantine of anyone entering Fiji to 28 days to ensure we don’t let our guards down. PRAMESH NAIDU Martintar, Nadi

I BELIEVE even the slightest thought of decriminalising marijuana should never be considered or deliberated upon. Fiji is already infested with the unmanageable meth and marijuana pandemic (look around you) and legalising any form of drugs either for recreational or medicinal purposes will logically prove catastrophic. I personally despise drug users and besides, we do not want to be tagged as a weed nation and the social evils associated with it. Suna A-G? Please ganja nai legal karna! NISHANT SINGH Lautoka

It is good to see the presence of police at the Namaka Public School junction traffic lights which have stopped working since last Friday. I wish to thank the area police for providing assistance and protection. Your alertness and timely action is commendable. Had you not been vigilant, I don’t think this could have been possible. I’ve always emphasised the importance of police presence when a situation of this sort arises. Of course prevention is better than cure. Suresh Chand Nadi

I haven’t seen the Labasa Town Council using the new garbage truck. Please use it so our garbage rates can be lowered. Sukha Singh Labasa

A lot for Fijian referees and linesmen to learn. Game belonged to the players not the ref. Dan Urai Lautoka

The eventual effects of the double banger Hong Kong now faces (its new national security laws and the continuing repercussions of COVID-19) on the Hong Kong 7s from now on remains to be seen. One thing is however quite certain and that is the atmosphere in the HK7s will most likely never be the same again. Well, not as carefree and exuberant as it used to be anyway. The “new normal” for Hong Kong now begins. Edward Blakelock Admiral Circle, Pacific Harbour

The incoming chancellor of the USP Nauru President Lionel Aingimea’s statement regarding his plans for reforming the governance regime at the university (FT 04/07) gives us reason to be optimistic and confident that the premier regional university will regain its lost prestige and purpose under his progressive leadership. I wish him every success in his endeavour. Rajend Naidu Sydney, Australia

It seems a large number of those arrested breaking curfew were drunk. It would appear the drink either gave them courage or made them forget. How many people arrested were stoned? Think about it, weed and drink are mind-altering substances, yet I believe only one brought out such people. Which is worse? Why is the weaker one illegal? Russell Fong Kapadia Pl, Raiwai, Suva

I believe retiring tradesmen and technical workers at 55 should be categorised “the dumbest decision ever made”. Dan Urai Lautoka