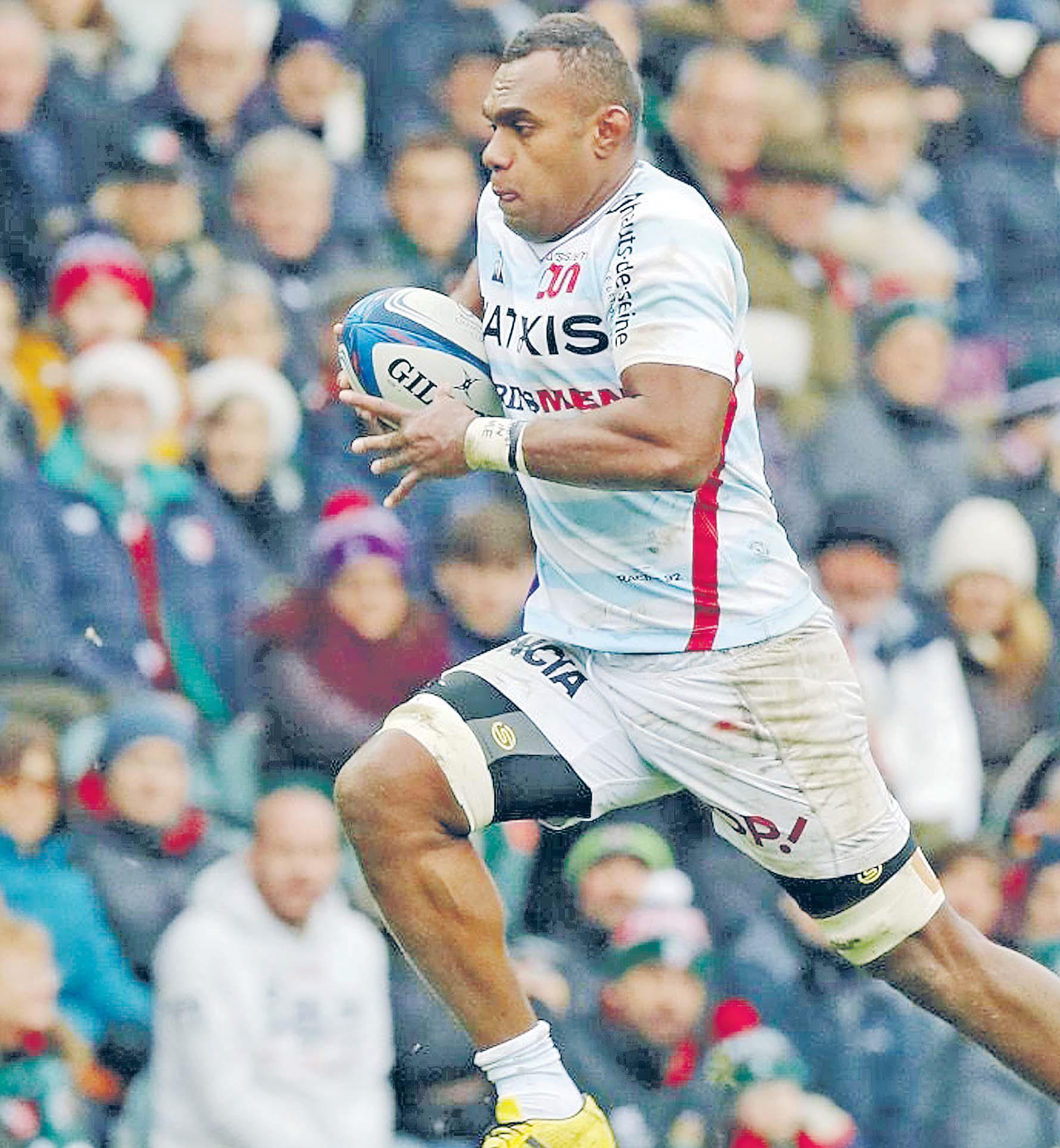 Leone Nakarawa of Racing 92 races away to score his try against Toulon in their 22-13 win yesterday to help move his team to sixth place in the Top 14 in France. Picture: PLANETRUGBY

Our sensational 15s lock, the king of offloads and Olympic gold medallist Leone Nakarawa was at his usual best as he scored a try that helped Racing 92 down Toulon 22-13 in the T14 rugby competition. Nakarawa played an instrumental role in defence and attack as the Flying Fijians beat France last year and will hold the key to our rugby onslaught against Australia and Wales during this year’s RWC 15s in Japan. Known for his discipline on and off the field, the giant lock has earned fame for his hard work and dedication and continues to make sports headlines. Nakarawa’s flying form will add boost and glamour to the Flying Fijians side and should make us contenders to progress from our pool into the quarterfinal. Rajnesh Ishwar Lingam Nadawa, Nasinu

I MUST commend the new Minister for Local Government for being upfront about the current state of affairs within local municipalities. As she has correctly pointed out the laidback mindset is one of the main impediments that have slowed down development works (FT 06/01). There is a ray of hope that things will improve under her leadership. These changes are long overdue. The current work culture has to go. As a ratepayer, I have firsthand experience with my application for a permit for a fencing work which has taken more than four months to process and I am still waiting for the final approval. That reflects on how much priority is accorded towards customer service. I believe a major reform is necessary not only to transform and modernise the archaic legislation and governance structure of the councils, but more so to make the systems and processes more facilitative to meet the contemporary needs and demands of businesses and ratepayers. SELWA NANDAN Lautoka

For the sake of Fiji sevens fans wishing to apply for a visa to watch our boys in action in Sydney on the first week of February 2019, I hope the Australian High Commission will have a system in place to process applications for these Fiji fans. Currently, some of those who applied for a visitor’s visa in late November and December 2018 are still waiting for the results of their application. Sydney, Australia is a popular destination for Fijians and we all hope our Fiji 7s team will do well there after Hamilton, New Zealand. Thank you Australian High Commission visa officers for the processing of all visas for the Sydney Sevens on time. Savenaca Vakaliwaliwa Suva

Either Simon Hazelman is not familiar with the processes involved in making appointments to positions (FT 05/19) or simply ignores the general procedures that are required in cases such as that of the Commissioner of Fiji’s new Online Safety Commission. For his information, I believe the effective execution of the responsibilities of the commission requires a selection system which should be transparent, robust and must exhaust all tests to ensure that the right person is appointed. In order to do justice to the commission, I believe Government owes this much to the people of Fiji. Emosi Balei Suva

It would be ideal for school to resume on January 21 than on the 14th, this is because of the weather situation we are experiencing and the main reason is that all shipping movements are still being grounded until further notice. Not only the children are stranded, it’s the teachers also that are being held up since the weather became a scare. At the moment schools have been used as evacuation centres and some areas are still affected by the floods, that to prepare for school for those unfortunate will be hard. The best would be to delay the start for another week and everything should be normal by then. Hopefully the relevant authority will be looking seriously at the issue. Tomasi Boginiso Nepani Rd, Nasinu

Sometime back there was an article on how one of our 7s reps turned down furthering his education at university to pursue his rugby career. With the new academic year about to resume for all young and old, there are some hard decisions that need to be addressed by those budding rugby aspirants. What after rugby? Samoan midfielder Eliota Fuimaono Sapolu was suspended from all rugby for speaking out about the double standards meted out by World Rugby to tier 2 rugby nations. In an interview with Close Up — New Zealand, when Eliota was posed the question, “Do you understand that this could jeopardise and end your rugby career?” Eliota replied, “Yes, that’s why I studied hard.” TUIMASI LOTE MASITABUA, Nauluvatu, Suva.

After 12 years, singer Laisa Vulakoro has decided to break her silence about her encounter at the Queen Elizabeth Barracks in December of 2006 (FT 06/01). Can the thousands who suffered the atrocities of the 1987, Sitiveni Rabuka coup, please break their silence as well! It would be interesting to know the severity of the crimes committed against thousands of Fijian citizens during the 1987 act of savagery. Laisa said that as a young girl growing up in her village in Yacata, she was taught to stand up and fight for the truth. She said she was always determined to stand for the truth and speak out on issues that mattered. The question I have is why has it taken her 12 years to do so? To say that she managed to regain her confidence after 12 years is a rather dubious excuse. What is your actual motive Laisa? Simon Hazelman Rava Estate, Savusavu

Why has it taken Laisa Vulakoro 12 years to come out from the dark and tell her story relevant to the 2006 Commodore Voreqe Bainimarama coup. I am surprised Laisa did not speak out against Sitiveni Rabuka’s May 14, 1987 coup when she was severely affected. I believe Mr Rabuka wrecked the lives of many including our economy, there was untold mass migration Laisa, most hotels were shut down and I believe workers were made redundant. I believe our only airline was operating empty flights to try and make stable the tourism industry and many other tourism properties around the country went into damage control mode, spending millions of dollars to recover and protect their investment. I guess she will not lambast Mr Rabuka or is she being paid by The Fiji Times, who I feel must also go out to the public and interview those who lost their livelihoods and families from the 1987 coup. Tukai Lagonilakeba Namaka, Nadi

Laisa Vulakoro’s story in the Saturday Times is a classic example of “not all Fijians being equal under the law in Fiji”. The prominent Fijian musician opened up about the 2006 coup and detailed how she was verbally and physically abused by soldiers for being a critic. As per Fijian nature, she’s forgiven her abusers. As usual, Fiji police can’t confirm if they will investigate the abuse if a report was lodged. The Fiji military had not responded to The Fiji Times questions when I read the article. It took Laisa 12 years to talk about the ordeal publicly. The events of 2006 were led by Fiji’s Prime Minister today. Those involved in the 2006 coup are covered by immunity from prosecution so they will never face the consequences of their actions. Fiji is also in the UN Human Rights Council. Nazhat Shameem has been endorsed as the vice president of that institution. Fiji is portrayed as a religiously strong nation around the world. But we don’t even know how to treat our own people with the dignity and respect they deserve. And we’re the world’s truest democracy. That’s the irony. Kelvin Anthony Melbourne, Australia

I suggest that we should look at having “charity bins” placed in all towns and cities where people can place their pre-loved belongings such as clothes, shoes and cooking utensils for those who need them. Anybody in need can simply take home whatever they like. Remaining items could be picked up by town/city councils once a week and handed over to NGOs for its distribution in other areas. Ashis Kumar Ba

Anne Dunn’s recent statement urging Fijians to be silent if they have nothing nice to say sounds like a threat to free speech. That doesn’t sound very nice. Samuela Savu Daliconi Village, Vanuabalavu

Lautoka Hospital has notices that say we are not allowed to take photos in the premises. Is there a specific reason for this? Allen Lockington Kava Place, Waiyavi, Lautoka

Should be, “I may not like what you say, but I will defend to death your right to say it”. Keep “on line” with that. Manoj Lal Patel Drasa Ave, Lautoka

I believe it is not surprising that the Prime Minister seems to be the only one visiting evacuation centres. Where are our politicians? Where are the successful parliamentarians who won seats in the last election? This would be the best start for those thinking of becoming politicians — just visiting the evacuation centres. People are in need of our help and with school starting next week, it will be a very difficult for them. Where are all those who were barking before the election? I believe this is the moment you have to prove yourself. Tomasi Boginiso Nepani Rd, Nasinu