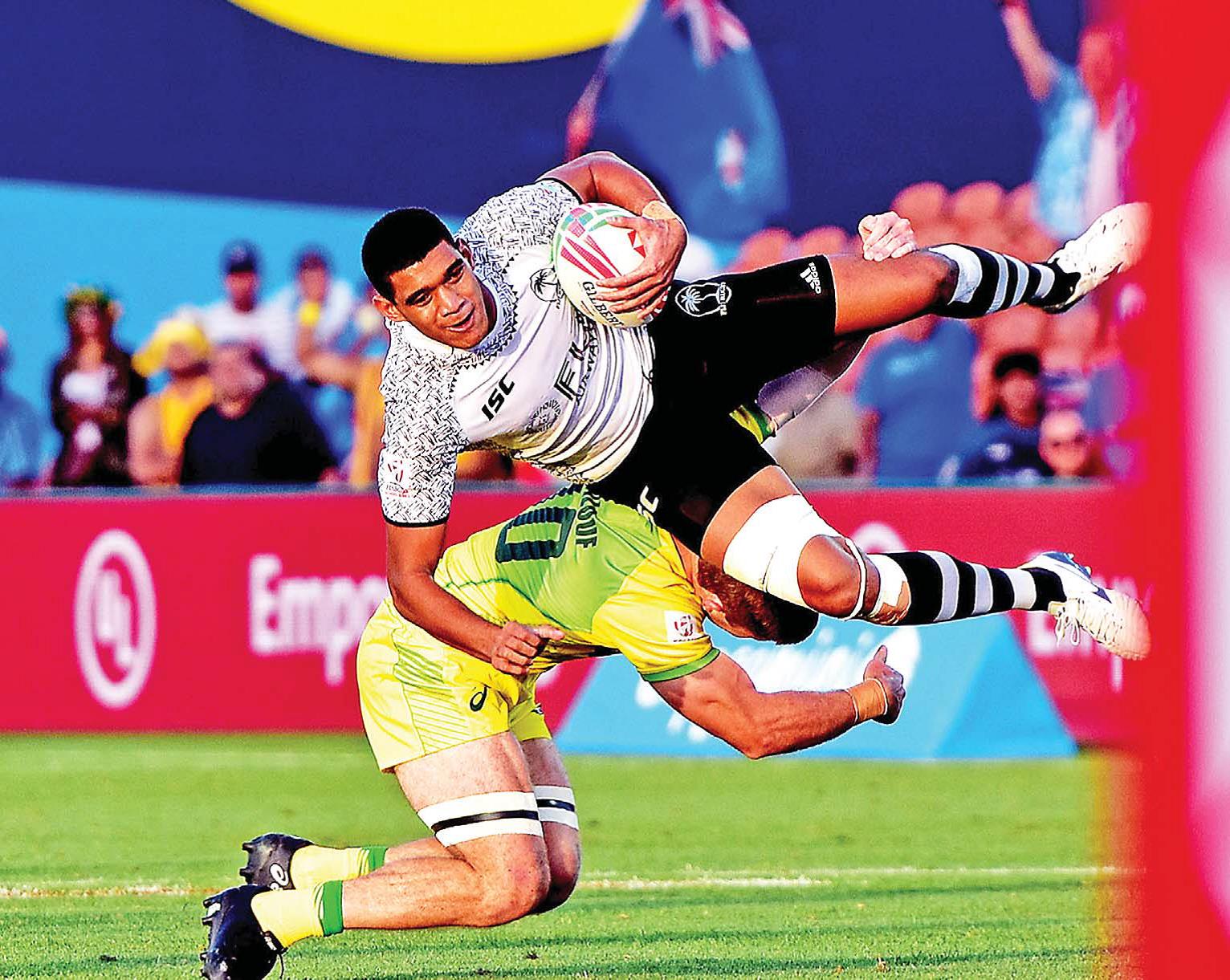 Fiji Airways Fiji 7s rep, Meli Derenalagi, launches into the air after getting tackled by an Australian player during their last pool game at the HSBC Hamilton 7s last year. Picture: RAMA/FILE

Tuimaba, Derenalagi and Botitu continue to make headlines. After guiding the Fiji Under-20 team to the Rugby U20 Trophy in Bucharest last year, Fili and Dere have made an impact on the current circuit and I fear that the duo alongside Nasoko and Tui are going to pen new contracts soon. Currently Naduva leads the top try scorers list with 15 tries followed by Tuimaba while Botitu topped the DHL Impact Player of the Hamilton 7s with 13 tackles, 6 breaks, 7 offloads and 20 carries. Since being elevated to the position of captain Nasoko has made a tremendous contribution to the game and has eased pressure off Jerry’s shoulder. It seems that wearing the captain’s armband has added brutal power to the Yasawa flyer. Furthermore, Derenalagi is no stranger to rugby and the former Victorian has elusive footwork and is aggressive at the breakdown and his opening try against Canada was a beauty to the eye. Derenalagi’s ability to off-load under pressure is remarkable. On the other hand, Tuimaba’s try against the Blitzbokke has been rated. The Army gas man strode to the sideline and he bumped off Shelvyn Davids to score an absolute beauty and send the passionate Fijians into a frenzy. Finally, Fiji’s off-loads and the high levels of confidence have been breathtaking with those bog hits that have made the opposition make unforced errors. Our fan base in Hamilton was rock solid and hats off to the magnificent Hamilton crowd for the support. As the magical Fijians head to Sydney to face England, Samoa and Japan, expect another huge round of support. Sydney has not been kind to Fiji as were Adelaide and Gold Coast. Our boys are likely to meet South Africa or Australia in the cup quarters, NZ in the semis and USA in the final. Toso Viti, toso! Rajnesh Ishwar Lingam Nadawa, Nasinu

The Hamilton 7s rugby commentators ran out of superlatives to describe the Fiji 7s team on their way to winning the Hamilton 7s on Sunday! So complete was the way the Fiji 7s team played throughout the weekend, easing up on the last game against Australia on the first day and then implementing the finishing touches to their green canvas in the final against USA, was just another day on the rugby paddock for the Fiji 7s team. Their pose for sports photograph of the year, the raising of the little girl to the heavens to launch their pre-game quiet time just before kick-off in the finals was Picasso-like in its intensity that the whole stadium and the world marvelled in its simplicity. As we celebrate with the team this victory and know that any Fijian 7s team can replicate the performance in Hamilton, we thank the Lord for empowering the team with natural 7s flair and flamboyancy. And we look forward to Sydney this weekend and pray that the team will have the strength and forte to express their repertoire of 7s skills to the Fiji fans in Australia for a second straight weekend. Qaqa Viti! Epeli Rabua Suva

The talisman Tuwai had a great game on the final day. I thought on the first day he lost some of his edge when he was chased down twice in the pool games, but in the finals he proved why he is in the Fiji team and is possibly another sevens legend in the making. That crucial turnover in the first half, the long range try and the ducking and weaving provided too much for his opponents to handle. He rightfully deserved his best player trophy. The whole team performed extremely well and its just reward for their perseverance and hard work. Another player that stood out was Botitu. He is leading the charts on the performance tracker and with three tournaments behind him, he has shown that he is a consistent performer. I noticed that passing to the right is a challenge for him as the weaker left hand is used to propel the ball across his body so he often turns (passes left) when passing to his right and it showed in the finals when his long pass floated forward when trying to pass without the usual turn. Nothing that a few practice sessions can’t fix. He is building up to be the complete player and should be in the running for rookie of the year at the end of the season. Thanks again to the Fiji sevens team for an entertaining two days and to the coach who will not settle for second place, well done and well deserved with your Mark of Excellence award. Right now the Fijian sevens team is not only flying but is soaring above the rest. All the best in Sydney. Sailosi Naewe Naduru Rd, Nausori

The shift and focus should now be solely on the Sydney 7s to complete the rout in our two nearest sevens tournaments. Recovery process is vital and the good news is the short travel across the Tasman. If you have noticed Derenalagi, Botitu, Tuwai and captain Nasoko remain the core players in every match and are the last to be replaced even seeing them complete a game without a scratch. Such is the difference in fitness that we are seeing and accolades to fitness guru Tikiko from Nasama Nadroga. The boys need a good recovery plan and a balanced diet to switch on again within 4-5 days and I am sure there is an action plan. All the top teams would be waking up to watch our games with replays to counter our attacks and our new brand of defence. The battle to dethrone Fiji has begun and there will be no short of armoury in the battle field to defeat Fiji. The real test is Sydney and if Fiji can produce and conceive a totally different game plan and maintain the fitness and consistency, there will be no stopping them. We are the trendsetters in sevens rugby both on and off the field with our fan base. Toso Viti tukuna vei Sydney sa na lave na rara… joka! Shalwyn Prasad Mukta Ben Place, Nabua, Suva

I believe it appears the Ministry of Education is treating our teachers like second-class civil servants. Our teachers play a very important role in our society, which is both significant and valuable. They are also mentors to our children and they’re looked upon in communities as leaders and decision makers. As a parent I leave my children with them five days a week for 6-8 hours a day. I place my trust in the teachers to educate and mould my children to grow up and be successful. They educate our youths in society who in turn become leaders of our next generation. Yet the MOE, I believe, is treating them with no respect at all. I believe all of these will definitely distract the teachers from performing their main function and roles and that is to educate our children. Furthermore, the teachers’ focus and concentration will be not be in the classroom but more worried about how to pay their bills, groceries, rent, loans, etc and also what the MOE will come up with next. I believe the MOE needs a good shake-up and perhaps total reshuffle. Mr PM I believe your vision for an educated Fiji is being flushed down the drain by your MOE. To all the teachers in Fiji, I thank you so much for caring. I know that being a teacher in Fiji isn’t easy and most times can be a thankless job but I thank you sincerely for the sacrifices, hard work and commitment. George Kutty Padam Lala Rd, Namadi Heights, Suva

I believe we are all proud of the FijiFirst Government and its achievements in the past four years of leadership. Some Fijian families were in tears when our Prime Minister announced that his Government wants Fiji to be a smart nation and wants all Fijian children to attend school. The announcement of free school fees, bus fares, textbooks and other free goodies for all Fijians just branded the FijiFirst Government and its leadership as heaven sent. I believe this is one reason Fijians voted them back into power in the last election. As a FijiFirst supporter, who also voted for our PM, I am humbly pleading for Government to reconsider its stance in not providing free education and other goodies for Fijian children and students who choose to enrol in privatised Christian faith-based schools. I have read the story about Navesau Adventist High School and it kind of makes me sad that the Government I support is not living its promise on treating all Fijians on a level playing field. Please Government reconsider your stance because children in Christian faith-based schools are also Fijians. Savenaca Vakaliwaliwa Suva

At a time when children’s indiscipline in schools is a matter of concern for all stakeholders, the Ministry of Education deems it fit to remove executive teacher and school counsellor positions. What a joke! The move is certainly no melodrama, or is it! Arun Prasad Dilkusha, Nausori

From the scintillating display of rugby to the humility shown before and after the final whistle. From being the scourge to all opposition, better yet the tender care and respect accorded the young ball girl. My word, brought me to a heart-rendering moment of faith in humanity. I am sure, reiterated; is this not how the world should be; Fiji. Sydney, “a storm is coming”. Get ready to be rumbled! MANOJ LAL PATEL Drasa Ave, Lautoka

What a superb performance to prove to the world that you are the best and the way the world should be. We all Fijians in Hamilton felt very much at home in Suva seeing our diehard Fijians playing for Fiji. Go Fiji, go! Tahir Ali Hamilton, New Zealand

Prices of goods and services continually change because of demand and supply. It is difficult to predict future prices but some things about price is guaranteed. Prices mostly go up by a bigger margin and fall by a smaller margin. Price rise many times and fall fewer times. I believe price rises get effected by traders as soon as declared. Price is a trader’s friend but a consumer’s enemy. Mohammed Imraz Janif Natabua, Lautoka

I remember in my primary school days, Wednesdays were bank day. Bank staff would go to the schools, to open accounts and process deposits; this also was an opportunity to teach the children about finances at an early age. Now it seems there’s just too much oversight. Nigel Fiu Owls Perch, Lautoka