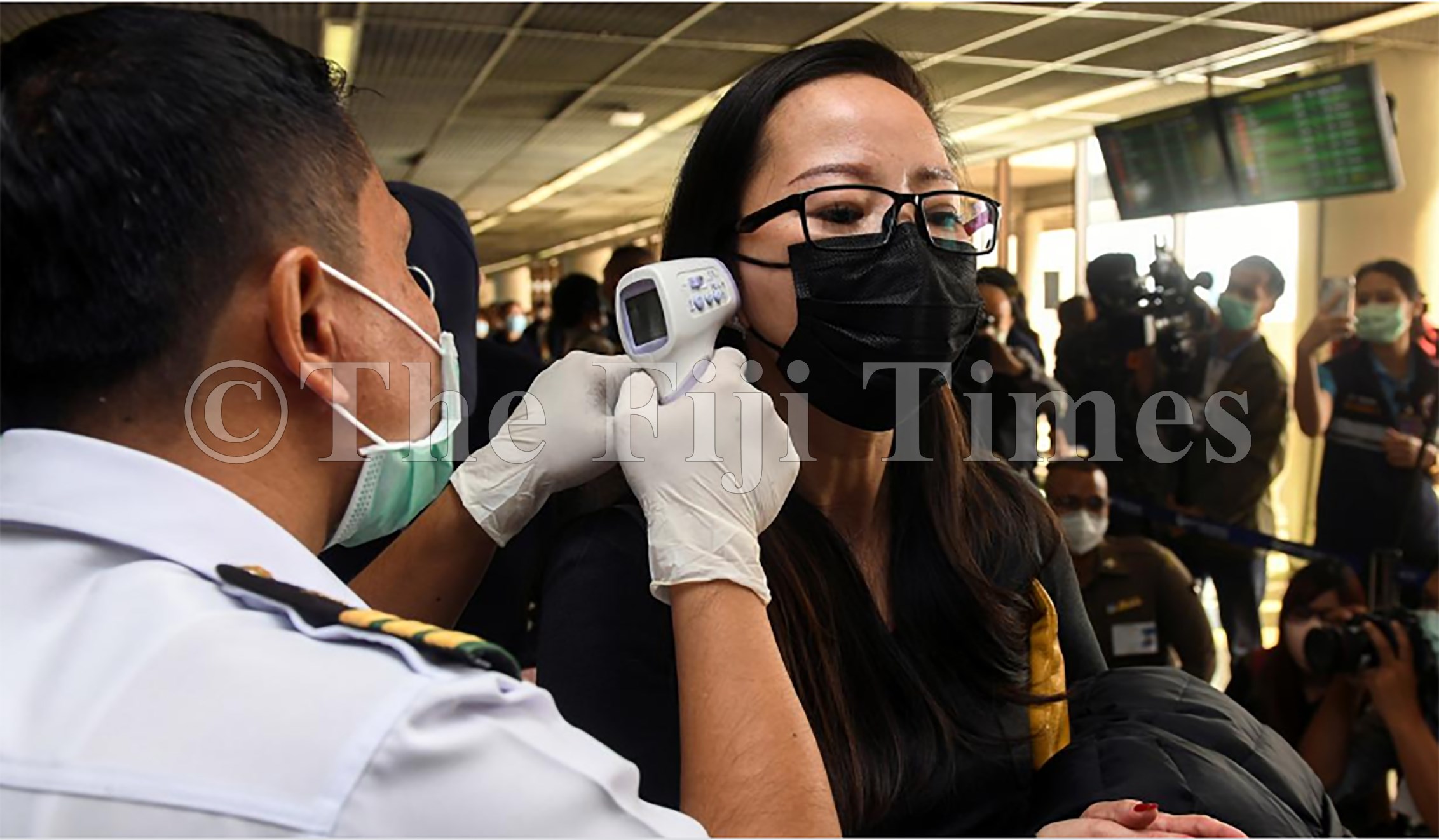 A health worker uses an in-frared thermometer to check the temperature of a tourist who arrives at Bangkok’s Don Mueang Airport, Thailand. Picture: REUTERS

The rapid acceleration of the spread of this disease plus a death toll of more than 100 already, is a grave cause for concern. Given its characteristics it is very hard to detect people carrying the virus as it can be spread to others before any symptom displays. Given this, the Health Ministry must now ban flights originating in Hong Kong and not allow any passengers who have been in China in the past month from boarding flights originating from other airports to Fiji. The virus is killing people over the age of 50 years in general. In Fiji, if we are to believe statistics thrown at us about diabetes and other lifestyle diseases, at least 30 per cent of Fijians have compromised immune systems, leaving them very susceptible to succumbing to the coronavirus. I am 73 years old, have been diabetic for at least 23 years. We all have to die one day but why should I pass on from a virus originating in China, a country well known for breeding illnesses as a result of poor hygienic practices in markets and the like. Beginning right now, the WHO and other health organisations must put extreme pressure on China to clean up its act regarding public health. History shows that some efforts are being made but how many deaths will it take before real improvements are noted. Allan Loosley Tavua

The coronavirus outbreak in China seems to be getting out of control, we in Fiji need to put in place the appropriate WHO protocols at our borders, we must be alert and very stringent so as to identify the carriers who are its human agents, It may even be more fatal than the dreaded SARS, there are already 106 deaths and thousands affected worldwide so far. Let’s all work together to save our beloved nation from what can be a very deadly virus invasion. Edward Blakelock Admiral Circle, Pacific Harbour

So according to BBC the mayor of Wuhan City has resigned because he could have given out the message about the people being infected by the coronavirus. But he had to follow Chinese government protocol and alert Beijing first before he could do something. But by that time it was a bit too late. And now almost the whole world is on alert. That is what bureaucracy sometimes bring chaos. I wonder what would have happened if he made a decision on his own and sealed the city? We will never know. Allen Lockington Kava Place, Lautoka

WHILE it is great that our Prime Minister Voreqe Bainimarama is going about trying to get us visa waivers from as many countries as possible I suggest we start with countries closest to home, New Zealand and Australia. About 15,000 Fijians live in New Zealand and about 70,000 live in Australia. Many Fijians now have close relatives living in both of these countries so it is here where we really need open visas to visit. What’s confusing most of all is that New Zealand and Australia have long list of visa waiver countries from some of the least expected countries, but we are nowhere to be seen. We, on the other hand, have exempted pretty much all the countries around the world from entering Fiji? SIMON HAZELMAN Rava Estate, Savusavu

As stated by Sukha Singh letters to editor (01/28) “well in a car, if they don’t spark any more replace them with new spark plugs”, let’s not rule out the spark plugs! Spark plugs are not the only issue, thus faulty distributor, ignition coil, crankshaft sensor and computer board can also fail to do its part which can hinder sparks on plugs. My point, why replace the spark plugs when other issues can be rectified to provide sparks on the same plugs. Remember the spark plug gaps can be adjusted to boost the same plugs. Shamal Chand Kuku Bau Rd, Nausori

Think the sale and use of single plastics bags is a thing of the past? Well think again. While in the process of purchasing a new belt from this renowned formal, street and surf wear retailer situated along Vitogo Pde, I was politely offered the option of a plastic bag with my purchase. Assuming it to be those thick 50 something (forgot the unit of measurement) bags now distributed in retail chains, I nodded in the affirmative. Walla! The pretty and friendly cashier whipped out a single use plastic bag and said: “50 cents please”. Not wanting to ruin my peaceful Monday afternoon, I declined the offer and walked away with just the belt exposed in my hand. Apparently not everyone is on the same page of saving our already vulnerable and volatile planet. Praying that we stay clear of that Corona or Heineken virus currently taking it’s toll in China. Nishant Singh Lautoka

The Babasiga Lions gave Labasa fans everything to cheer for. The evenly matched battle between Ba and Labasa was decided in extra time as Ratu Anare, who had left for greener pastures, sneaked past the Ba defenders to hand Labasa the CVC title. This gave Labasa fans a lifeline as they erupted with joy and the sound from the traditional musical instruments intensified. Labasa with all locals stood up to face a Ba team laced with players from Lautoka, Solomon Islands and Vanuatu and Master Ronil Lal showed why he’s the best. My heartfelt gratitude and a big vinaka vakalevu to the players, team officials (Nilesh Lal, Roneel and Edwin), president Rayaz and the fans for their support on Sunday! As the song jag lal lal hit the airwaves, Labasa fans composed songs which became a hit! With the BOG, IDC and CVC crown in the bag the Lions are champions! Labasa’s hard work, teamwork and the bonding between the players and the officials has been clinical! Finally, thank you to The Fiji Times for this week’s Goal Fiji! As I conclude, I express my heartfelt sympathy and condolences to the family of the late Satya Singh Koko! Rajnesh Ishwar Lingam Nadawa, Nasinu

Labasa football aka Babasiga Lions were truly the soccer giants of 2019. It’s very rare that we have a soccer giant in Fiji apart from Ba football. Ironically Labasa defeated the giants of Fiji soccer — Ba. Coach Ronil Lal has stamped his position with some solid coaching and looks set to continue in 2020. The lone team from the North island has to endure long travelling and camps to attend tournaments which is not easy. The sacrifice and dedication with youth players injected with some old horses is paying dividends. Taniela Waqa is one player still enjoying top level soccer. The veteran from the ’90s is still at his best. Go Lions joka dina. The win is for those great players like Sami, Zoing, Evans, Williams, Lomu, Tukania, my favourite Maradona Peters, Logaivau, Namoce, Bhagwan Tuilevuka, Catarogo and many big names that have steered the Lions over the years. Joka kece… go LA. Cheers to Sukha Singh the iconic Labasan! Shalwyn Prasad Mukta Ben Place, Nabua, Suva

Our Government has been taking a proactive approach after Cyclone Winston, working very hard with partners across the globe to prepare Fijians to be ready mentally and physically before any disaster strikes. Coronavirus is a disaster ready to strike and yet our government is no longer taking a proactive approach. Our Prime Minister, Voreqe Bainimarama has confirmed that there is no coronavirus in Fiji and the Minister of Health, Dr Ifereimi Waqainabete, has confirmed that Fiji will not shut its borders. (FT 28/01/2020) Now here it is clear that the Government is taking an active approach and my question is if the coronavirus strikes in Fiji, will we then close our borders? If we then do so, I believe it will be too late for us then, for I am adamant that we do not have what it takes to control this disaster which is ready to strike namely coronavirus. Kositatino Tikomaibolatagane Vuninokonoko Rd, Navua

Sure we were all disappointed last weekend but I have a funny feeling we won’t be for much longer. It’s so safe and convenient to coach critique and score from the comfort of an armchair. Doe Miller Ritova St, Labasa

The Fiji National University has reduced its mathematics intake mark to 30 per cent for some programs, don’t you think this will result in poor graduates? Shouldn’t students work hard to attain better results than enter tertiary education? If they can spend long hours on social media then I’m confident if they study diligently then grades will improve. Tertiary institutions must refuse to compromise their standards. DHARMENDRA KUMAR Rewa St, Suva

After advising journalists (not an easy profession) to ask bus company owners (not easy work) pertinent questions, the Fijian Competition and Consumer Commission CEO (not an easy role) raised a pertinent question himself to the journalists. “To clarify and tell him who they classify as poor (not an easy life)?”. Irrespective of the seven cents (too less for some and too much for others), it is a difficult question. There is one certainty in this debate. The opposite of poor is rich. Mohammed Imraz Janif Natabua, Lautoka

How can the mobile service provider guarantee that their network can cater for the thousands of users using their unlimited text messaging promotion? They can’t because some text messages are not being delivered to the intended recipients. Wise Muavono Balawa, Lautoka

I am glad that the Government is doing what it can about the deadly coronavirus. I’ve read that many big countries are screening people from countries that have connecting flights from China on to their country. As for the people working at the airport I salute you, do your jobs to the best of your ability. Sunil Kumar Lautoka

THE new special administrator of Rakiraki Town Council has highlighted about the lack of funds in the council’s coffers to the Public Accounts Committee. I wonder how many other city and town councils are facing the same problem? Most projects in most towns and cities are on hold, so directly money is a big problem for all councils. When the councils were run by elected councillors they never had these money problems, why now? Maybe the minister needs to have municipal elections so the councils don’t have these so called financial problems. Like the Nike advertisement says: Just do it! John Brown Drasa Vitogo, Lautoka