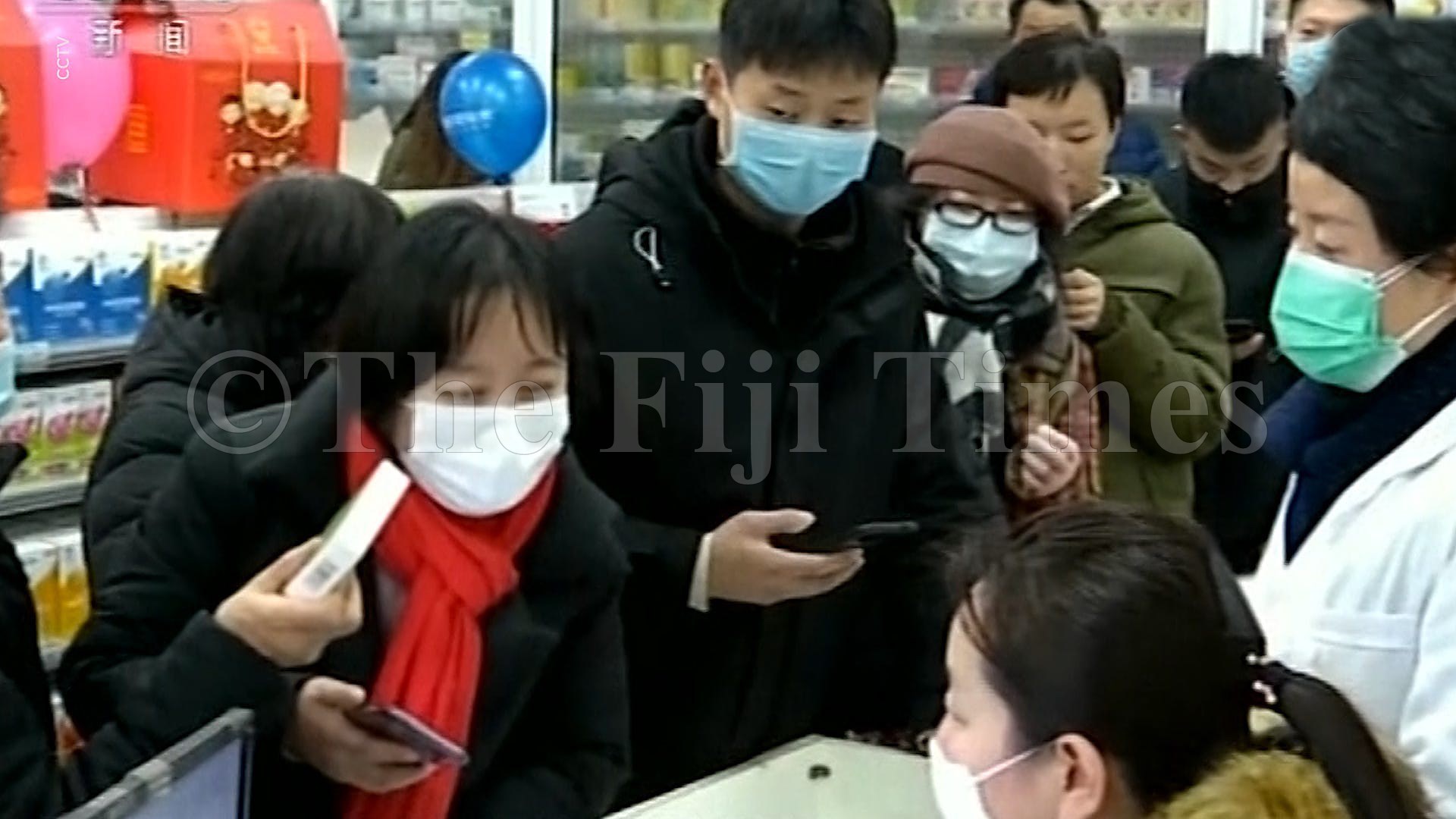 A letter writer thinks with the looming threat of coronavirus, we should take preventative measures before it’s too late. Picture: USATODAY

According to the latest BBC figures, the number of people killed in China by the coronavirus has risen to 80, with almost 3000 confirmed ill. Wuhan in Hubei, the source of the outbreak, is in lockdown and several cities have imposed travel bans. The coronavirus causes severe acute respiratory infection and there is no specific cure or vaccine. Most deaths involve elderly people or those with pre-existing respiratory problems. What are we waiting for Fiji. Let’s do the same as other nations before it is too late and we will be sorry that we didn’t take action sooner. Prevention is better than cure. M. S. Kaleca Nakasi

As the team heads for the Sydney 7s this weekend, a lot of pointing fingers are in the direction of individual play for the dismal start to the season. But we should recognise that individual play is the reason behind past glory. Unlike other teams which have a structured game plan, the Fiji team relies on individual brilliance and an unorthodox approach. When it does not stick, disaster strikes. As it has happened so far this season. Mohammed Imraz Janif Natabua, Lautoka

I was saddened to see our ranking on the WRSS points table. The reality is that we have lost a lot of ground and a lot of effort is needed for a top four finish. Fiji stands on seventh place with 31 points trailing NZ by 32 points, South Africa and France by 17 points, England by eight points and Australia and Argentina by four points. Hamilton, just like Dubai, was a disaster for Gareth Baber and our 7s team. While other teams have made strides, we have fallen to one of our worst starts on the 7s circuit. The Fijiana did well in comparison with the men’s team which had stolen the limelight before the tournament. Baber sounds like a broken drum now as his excuses are becoming monotonous. It’s high time that Tomasi Cama senior’s expertise be roped in before we fall further in Sydney. Our boys need to take ownership of their performance in Hamilton and show the form that made them champions last season. Jerry, Derenalagi, Tuimaba, Botitu, Ratu and Sevu must take the lead role in Sydney this weekend! By the way, congratulations to the NZ men’s and women’s teams for winning their home tournament! Rajnesh Ishwar Lingam Nadawa, Nasinu

Our 7s rugby coach Gareth Baber said that we lacked the ‘punch’ (FT 27/01) to remain in the cup contention in Hamilton last weekend. Let’s see what kind of punch we will give this weekend in Sydney so that we can do better. Nardeo Mishra Suva

Gareth Baber is not using lifting pods hence we are losing a lot of possession. In Ben Ryan’s coaching time he used two pods when receiving kick-offs. This is something he has not rectified from last year. Can someone in Rugby House relay this message to him, it’s getting frustrating. DHARMENDRA KUMAR Rewa St, Suva

Two areas of great concern and our weaknesses in them cost us the Hamilton 7s dearly. The kick-off area which was poorly managed throughout the game and secondly, the decision-making process when you are under pressure. Also players need to be told, when chasing the game, in any scoring opportunities, the team must aim for maximum points. Our two tries in the Argentinian game were scored out wide, when support runners were there and could have brought the scoring opportunities closer to the post. The past three tournaments – Dubai, Capetown and Hamilton – had all presented similar areas of weaknesses to the Fiji team. A performance appraisal is now required for the players to assist them to understand their individual areas of strengths and weaknesses. May I also ask why Tom Cama is not travelling with the team. Our pool of players comprises of very young individuals who need someone of Cama’s calibre when the going gets tough in a tournament. I would also suggest the position of manager needs to be reviewed and whoever is in this position must be prepared to wear a couple of hats when travelling with the team. Apart from the usual administrative roles, he must possess skills to psyche up players before the game, provide professional counselling services, must be ready to step in and offer religious support to the players leading up to the tournament. These players need a father figure to provide holistic support services to individual players. The manager’s job description
needs to be reformed and extra responsibilities added to the current roles.
I am worried that after three tournament failures, the players’ confidence level might drop and could affect their preparation for the Tokyo Olympics. Rugby House needs to get the right support staff now to reignite the boys to rediscover the level experienced in the 2018-2019 series. Let’s not press the panic button yet but let’s re-engineer the team systems and processes and we should be alright to defend the gold in Tokyo come July 2020. ILAITIA BOSE, Suva

ONE of many innovative strategies that our super coach Ben Ryan used during
Olympic year in 2016 was a one to one discussion with his core team players
selected for the Olympics. He even went to the extent of starting the talanoa and
veilomani process with the immediate next of kin and family members of our
players… spoke to them about the players. This built a strong foundation for team building and raised each player’s confidence on and most importantly off the field. Super effort. Secondly where is our strict diet and recovery process? I remember Ben used to sit and eat with the players and was also part of the strict diet process.
Ben Ryan is not in our campaign to Tokyo but the least we can do and show
our appreciation to him is by following some of his winning and tested strategies.
Our innovative process needs to start now or never … talanoa and keep the
veilomani. SHALWYN PRASAD,Mukta Ben Place, Nabua, Suva

I find it quite shocking that the Minister for Health is hiding behind WHO and its guidance in Fiji’s lack of decisive response to the coronavirus. He goes on to claim our preparedness to be on par with that of Australia, NZ and other Pacific countries. I am not sure what sort of briefing the minister is receiving but the precaution being taken here in Australia is unprecedented. Not only was each passenger from the last flight from Wuhan to Sydney met with individually, assessed and monitored, travellers from China, even if they came via another port, are being monitored. Of course Australia has the resources and expertise to do so. The news media here in Australia has been carrying news, awareness and emerging information on the coronavirus 24/7 since it broke out. Do we in Fiji, with our medical system I believe in a pathetic state, given recent reports, in a position to react and deal with the crisis? Some of our poorer and smaller Pacific nations have taken proactive steps. The Marshall Islands has banned all travellers from China, and Samoa just returned four visitors from Hong Kong who ironically travelled via Nadi. Australia has four confirmed cases, all in people who travelled from China. It is also emerging that the virus can even be transmitted during incubation period which can be up to 14 days. There is no current vaccination for this virus. This, not so uncommon attitude from the GOF, is putting our country and the people at grave risk. Can we not, over such security matters and unprecedented crises, let go of our egos and take sensible actions that are pragmatic and for the benefit of the country. WHO, or any other outside agency for that matter, do not prescribe national actions and responses which needs to be based on countries’ individual circumstances. They can only provide generalist opinion and information which countries are expected to adopt based on their national situation. The minister’s response reminds me of one other recent statement he made where he took issue with the statistics for the NCDs crisis affecting many of our countries in the Pacific. Can people in position of authority not bury their heads in the sand and be held accountable for any decision they are required to make in the name of the country. Altauf Chand Minto, NSW, Australia

I refer to the article ‘Baber identifies problem in Hamilton’ (FT 27/01). Baber, you have been with the team for so long, you should have identified and rectified all the problems by now. Well in a car, if they don’t spark anymore replace them with new spark plugs. Sukha Singh Labasa

Very disappointing performance against Argentina in Hamilton for the Fiji team. But we must trust in them to pick up the pieces because any game is won and lost on the field. So we just have to get over ourselves and realise that we’re only humans and bound to make mistakes which our lads did but proved themselves in their last game against South Africa that they are still up there and still the best. Let us trust in our boys to do the job which all teams are so aware of Fiji doing, and with our prayers and trust in the good Lord, our lads will feel the joy of the 7s spirit which is in most of the people in Fiji. Amen? Yes amen! Toso Viti toso. Phil.4.13. Sydney here we come! Richard M. Abel Tubou St, Samabula, Suva

Does anybody know how this surname Longbottom came about? Anyway, Longbottom is a really good sevens player. Sukha Singh Labasa

Is there any harm in having players’ names on the jerseys from the next leg in the World Rugby Sevens Series like other participating teams? Mohammed Imraz Janif Natabua, Lautoka

When will we learn