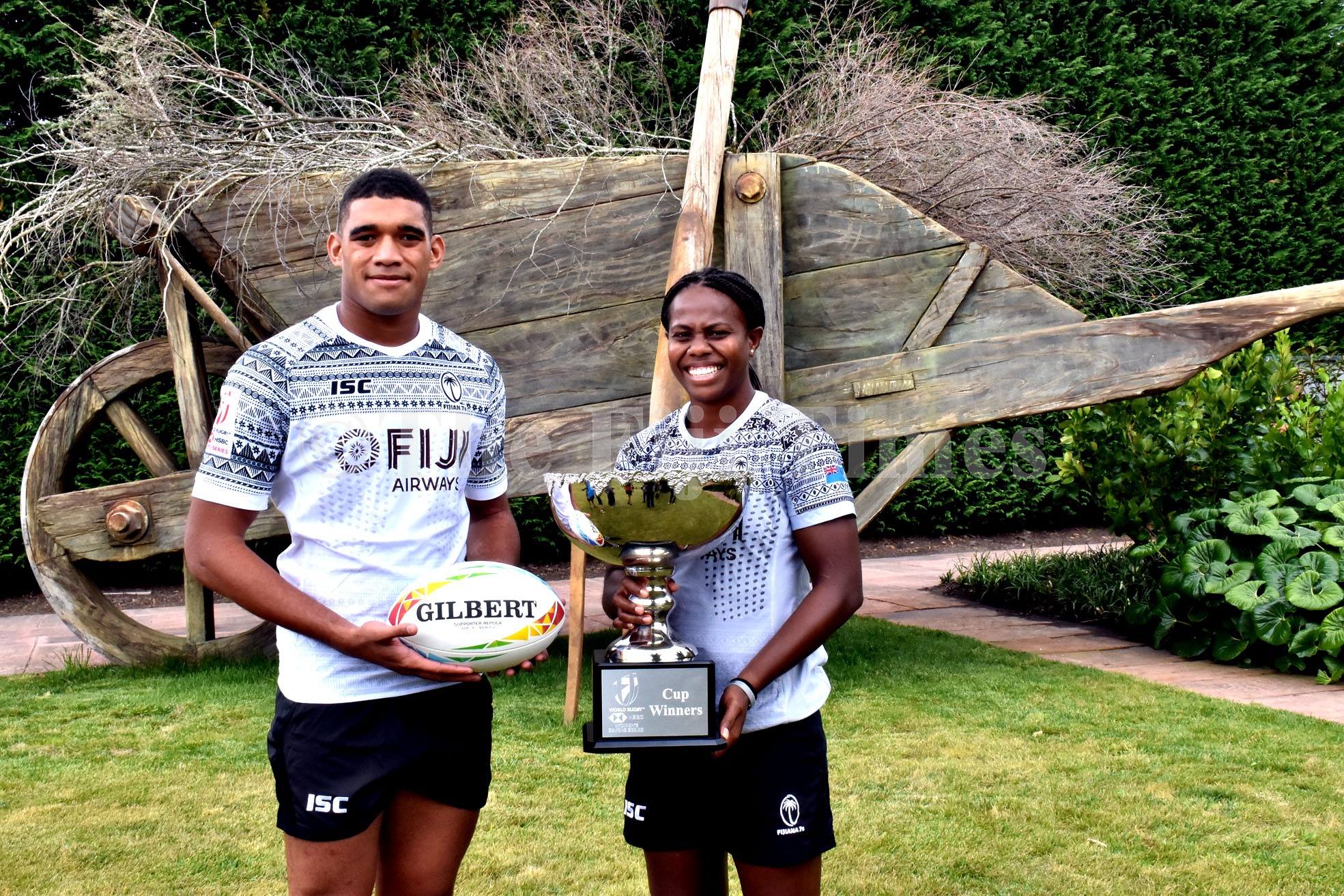 SEEING Tu Meli Derenalagi and Raijieli Daveua with the Hamilton 7s trophies made my day. Immediately my mind drifted to our priceless wins in Hamilton in 2018 and 2019. The Fiji Times team in Hamilton (Maikeli Seru and veteran photographer Rama) has been superb because they have built a wonderful momentum with one day remaining for the ultimate challenge at the FMG Waikato Stadium. As we count the hours to the kick-off, I thought I’ll bring some lines from the 2018 and 2019 win just to add spice. The famous words uttered by commentator Tony Johnson in 2018 (when Naduva scored Fiji’s second try in Hamilton) can never be erased and I quote, “Oh brilliant! What about the handling? What about the pass? Naduva scores! That is Fiji rugby at its best. Unbelievable skills! Unbelievable vision! Unbelievable flair!” Karl Te Nana echoed similar sentiments and I quote, “The entertainers of sevens rugby. This is the bit of skill that you just cannot teach. Fiji is right back into this one. That’s absolute instinct right there. Top draw! Don’t you love it when they are in this mood!” When Naduva scored our third, Tony lost his voice but said, “They have got the ball back. This is amazing. They have got another one. Naduva has three. Incredible!” Last year the duo combined to give fans another taste of enterprising rugby and this is what Tony had to say, “Carrying the ball like it was a boiled egg in one hand”, and “Great counter-ruck and off goes Jerry Tuwai. He is a champion. Another magic moment from Tuwai! Another brilliant Fiji try!” Te Nana summed up our win last year with these words: “It was going to take something special to stop Fiji over the course of this weekend. The determination had been there. Let the kava flow. Magical scenes and the fans have erupted. 38-0, back to back wins in Hamilton and back to back titles on the HSBC WRSS!” The Hamilton 7s is gaining momentum. Fans are basking in confidence! Toso Viti toso! RAJNESH ISHWAR LINGAM Nadawa, Nasinu

THE announcement by the FCCC that bus fares will increase is sure to be met with mixed reactions. While I have no issues paying an additional 7c per stage, I wish to make a point about the quality of service being provided to commuters. When the buses you so desperately need are built for “tiny” people, it means huge people like myself now pay more for an aisle seat that has you balancing awkwardly on one “cheek”. Imagine doing that on a long journey. The aisles in these buses can be very narrow so if you’re standing and other passengers need to get past you to get off the bus, you’re forced to lean in as much as you can towards seated passengers to make way or get off the bus entirely to allow movement through the bus. I appreciate buses as a form of transportation and find bus rides therapeutic but can bus operators and relevant authorities begin to prioritise the quality of service being offered? Comfort, convenience, safety and cleanliness are some key factors to consider. Also, can the Land Transport Authority avail information about the various bus stages on its website? Vinaka. SAMANTHA RINA Koronivia Rd, Nausori

I CAME across this piece yesterday. It’s to do with the dry skin condition or kanikani. This usually results from the over imbibing of yaqona. It’s common knowledge that yaqona is quite expensive now. To paraphrase what the writer quipped — Whereas one having kanikani used to be associated with the irresponsible or over consumption of yaqona, with the current prices of yaqona, to have kanikani is now a symbol of wealth! Allen asked — How about the namus? Brilliant! Taki! KINIVILIAME KETECA Nausori

I WOULD like to thank people for supporting the implementation of the plastic ban. It is indeed a joyful moment seeing people using alternatives of plastics which are biodegradable and environmental friendly. However, the sad part is seeing people using plastic bags that are still in the market at higher microns. A humble act of migration from plastics to alternatives would lead to a better, cleaner Fiji. The beautiful Fiji islands will celebrate its 70th year of independence and we need to maintain the beauty of our paradise with plastic free oceans. Therefore, a big thank you to all that have started using the alternatives and if you have not started yet, remember it’s better to be late than never. ISHA VERMA Caubati, Nasinu

HEY, FijiFirst Government, do you want to be better? Come let’s talk, send a few more intelligent members of your people to the Kava Parliament. We wish to work with you! After that you can have all the credit. I am tired of hearing all the negative remarks on social media. Kava Place Parliament has only three members. Come, but bring the grog. ALLEN LOCKINGTON Kava Place, Lautoka

I would like to express my views with regards to the opinions expressed by Simon Hazelman in the letters to the editor column recently. Firstly, I have great admiration for Simon’s intellect on diverse subject spaces. He always adds a new flavour in his writings. However, in my view, for Simon to come up with propositions like teachers abusing kava which reflects our education system is a misguided one. I am sure he hasn’t got any facts and figures to back up this assertion. There are many heads of schools and teachers who are hardworking, committed and have done wonders in realising the government’s vision for education. I firmly believe teachers are governed by a code of conduct in school and time and again reminded officially on prohibition of kava consumption during school hours. Anyone found in breach is dealt with accordingly. So, to be perfectly honest there is no question of kava abuse even in their wildest dreams. Government has also banned drinking of kava during official hours in all ministries. Secondly, Simon in his letter on January 21 titled “Performance of teachers” claims that there are many uninspired, unpopular, lacklustre teachers who would be better suited for other professions. I deeply believe that if Simon’s claims are to be true, then how come these teachers are still in the profession. So if Simon seriously considers that this is the case then he should direct his questions to proper authorities for answers on why teachers are behaving in this manner. Probably food for thought for everybody. I respect Simon’s opinions but it is always wise to do some fact checking before drawing up any conclusions. Pranil Ram Votualevu, Nadi

I refer to the letter by Simon Hazelman ( FT23/01) regarding Weightlifting Fiji. Definitely the debacle between Weightlifting Fiji and Levuka Weightlifting Association says a lot about the parent body. Indeed, LWA has produced great lifters until the Eileen Cikamatana fiasco with WF. As a sportsman myself, I urge Weightlifting Fiji to let the sport grow and truly get off that high horse or make way for dedicated officials. I am willing to sponsor a tournament to unite the two associations to reach a common goal. Otherwise, it will be down, down, and down for Weightlifting Fiji. God bless our enthusiastic weightlifters. Raymond Singh Golf Links, Lautoka

We are much too small a country for the differences, bickering and holding grudges to continue between the two camps in our weightlifting saga. All it does is to delay our potential to be world champions in this relatively minor sport. The continuing saga, is only creating a bigger gulf between the state of play today and the amazing unfulfilled potential we have on the world stage, even after the departure overseas of Eileen Cikamatana. Let’s swallow our pride, resolve our solvable differences now and help each other to achieve greater heights and lift world record weights. We can do it. We are really the only ones holding us back. This era may not come again. Laveta na rara, Viti, Laveta. Edward Blakelock Admiral Circle, Pacific Harbour

When the PM says “no one should be left behind”. What does he mean and what is the reality? Dan Urai Lautoka

There is a stray dog issue developing in Natabua (Stage 2). Three generations are roaming the roads. Grandparents, children and grandchildren. Generally, I think there should be planned periodic campaigns to control stray dogs and not wait for incidents to occur. Their numbers need to be kept in check. Mohammed Imraz Janif Natabua, Lautoka

The NZ 7s is very close to all Fijians as it sparked the opening of the World Sevens Series in 1999 with the then Wellington 7s. The Waisale Serevi-led side with the likes of the ‘Stretcher’ Satala, Delasau, Tuikabe and company created havoc on the park. One can’t forget the ripping of the late Jonah Lomu’s shirt, the ferocious tackle by Bill Satala and champagne rugby by the Viti boys. Can’t forget Serevi thanking the then Canterbury coach Robbie Deans for releasing Delasau for the sevens. I am looking forward to the same explosive game this weekend in Hamiltoni,.. go Viti go… show them to them in Kiwi land. Joka na qito sevens Viti kei na vuravura. Shalwyn Prasad Mukta Ben Place, Nabua, Suva

I don’t read the Fiji Sun so I missed Nemani Delaibatiki’s opinion piece on “Mr Rabuka’s complaint against Government to FICAC in relation to the $500,000 Rewa Dairy restructure consultancy to Aliz Pacific without following the tender process” (Attack on Rabuka FT 22/01). But Nemani Delaibatiki’s views in post-coup Fiji have become predictable. I believe he writes more as a government propagandist than as an independent journalist. That’s why Ro Filipe Tuisawau, the president of SODELPA, said what he wrote was “laughable”. I believe many Fijians, both at home and abroad, can relate to that. It’s sad that a “veteran journalist” should come to this. Rajend Naidu Sydney, Australia

I believe the Government has announced the partial divestment of Energy Fiji Ltd, a public monopoly owned by the people of Fiji. Public utilities that provide essential life support services to the people of Fiji such as electricity, water, health services, education and infrastructure should always be in public hands. One has only to look as far as our near neighbour, Australia to see how privatisation of electricity has pushed up power prices to be one of the most expensive in the world. When the return to shareholder model replaces the concept of the public, good citizens will be the loser. Andrew Rodgers Nadi