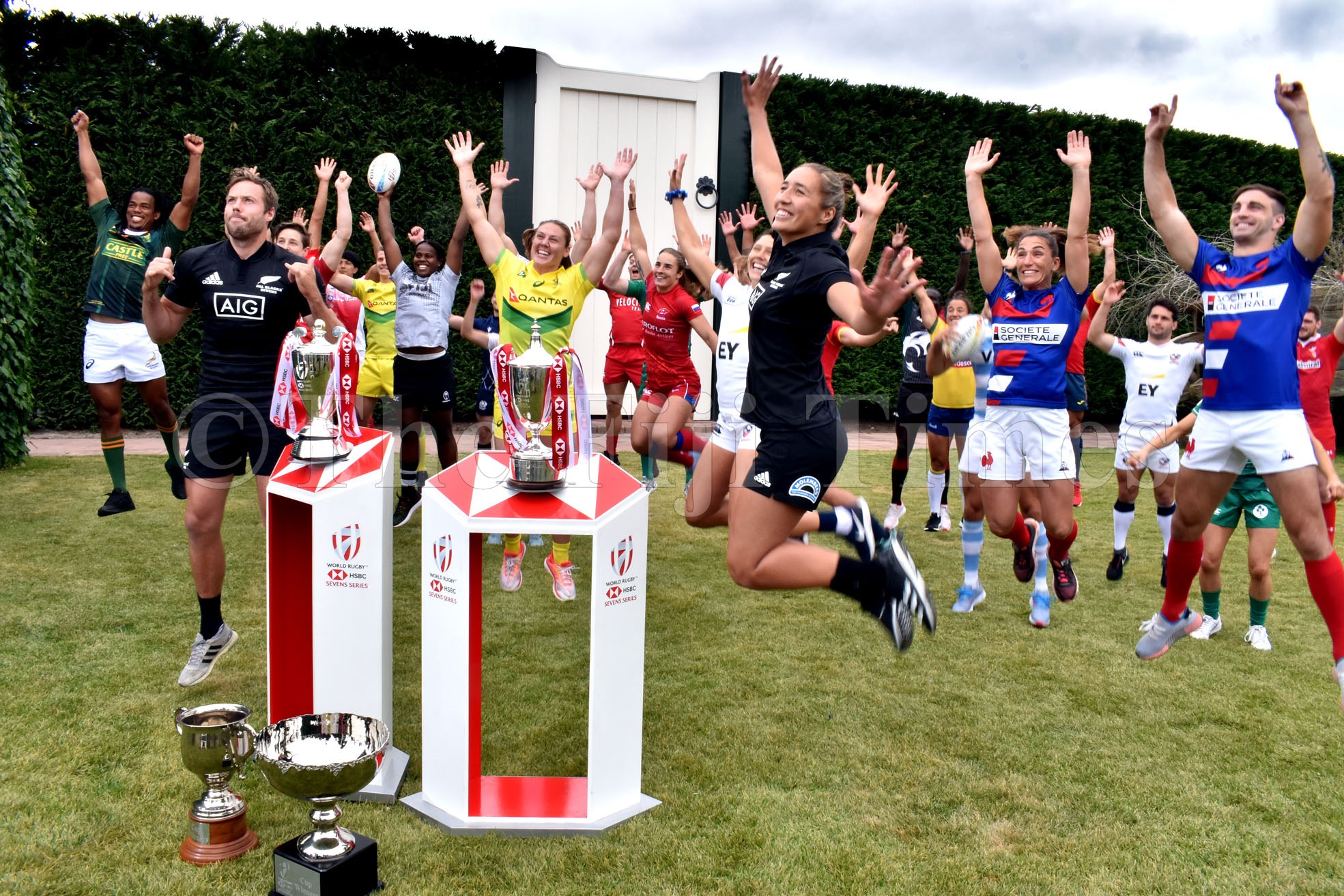 The captains of all teams taking part in the Hamilton 7s during their captains photoshoot at Hamilton Gardens yesterday. Picture: RAMA

Our editor-in-chief coined a wonderful editorial in yesterday’s paper. I agree with Wesley that Fijians around the world are keenly anticipating some magic this weekend. Those who watched the 2018 and 2019 victory would have got the gist of Wesley’s message. The 2018 win was special. We were on the verge of being knocked out by Samoa but courageous captain Kalione Nasoko saved Fiji and his burst from deep within our territory gifted us a place in the semis where our boys faced the All Blacks and we narrowly edged the hosts (14-12). Against South Africa, Fiji was trailing (17-5) at the break but spurred by the magical crowd we bounced back to shock the Boks (24-17). We won the 2018 Hamilton 7s in style –– Fiji beat Dubai 7s champion South Africa in the final. Fiji beat Cape Town 7s champion NZ in the semis. Fiji beat Sydney 7s champion Australia (26-15) in pool play. Last year our boys were outrageous. Fiji hammered Wales (54-7), Argentina (33-24) and Australia (26-19). In the cup quarters, Fiji thrashed Canada (33-7). We outpaced South Africa (29-7) and belted US (38-0). Our boys were in devastating form and the back-to- back win sent thousands of Fijians into frenzy. Although the park belonged to NZ we have dominated in Hamilton. Hence, 7s commentator Karl Te Nana knows too well that when the Fijians are in the mood they’ll sweep aside their opponents. Te Nana has also backed NZ and I’m sure that Fiji will start with a bang. Every game must be treated as a final if we are to make the semis. Rajnesh Ishwar Lingam Nadawa, Nasinu

My wife came back from shopping and potatoes, onions, chicken and fruits were packed in thick plastic bags. She had taken our usual big cloth shopping bags for the groceries. One friend commented, the more debate on plastics, the thicker they will get. Now we will be reusing those bags. As goodwill and encouragement, can each customer who takes plastic bags be paid 50 cents by the supermarket? Just asking. Allen Lockington Kava Place, Lautoka

If by chance, the cow attackers read this, how would you feel if your sciatic nerves (or psychotic nerves) were cut? In an instant you would remember everyone (including your childhood imaginary friend) and recite at length rhymes which cannot be printed. How would you feel if those cows were let loose on you? Wouldn’t that make you scramble north-east? But you are lucky. Not from the reason that people have not seen you in the act. Because, thirdly, you have human rights. Secondly, it would be too inhumane. And firstly, instead of grey matter, you possess spots and stripes. Of black. Mohammed Imraz Janif Natabua, Lautoka

Education Minister Rosy Akbar stated that the majority of teachers cannot upload their contracts on to the Fiji Education Management Information System (FEMIS) because they do not know how (FT 22/01). If our teachers can not conduct such an easy task then we really have a bigger problem than we think. It just goes back to my argument that the majority of our teachers are uninspired, unpolished and merely lacklustre performers requiring lots of fine-tuning to become the teachers we expect! Indeed a worrisome and troubling issue for the Education Ministry to be dealing with! Simon Hazelman Rava Estate, Savusavu

God’s most precious gift to all living things is the gift of life. Humans take this gift for granted and abuse it in many ways. They think that the disaster will not strike them but someone else. However, disasters can strike from any corner. Look what happened in the case of the Australian fire disaster; it struck suddenly and engulfed a major portion of the country, destroying lives and property. The heroic firefighters have been battling it for months and yet finding it hard to bring under control. Some firefighters have lost their lives as well in helping others. The compassionate Fijian Government rose to the occasion and sent a contingent of Fijian soldiers to help Australian firefighters. This mercy mission is laudable and deeply appreciated by the Pacific community and people around the world. Thank you Prime Minister for rising to the occasion and displaying true Christian spirit and neighbourly love. We are proud of you. Dewan Chand Donu Place, Namadi Heights, Suva

I asked a shoeshine fellow, how his work was. He related that he’d been shining shoes for 40 years. Two years ago, he got sick. He was bedridden. His left leg had to be amputated above the knee. When he felt better, he returned to his spot at the Yatu Lau Arcade. In his words, sega ni tiki ni noqu bula meu vakararavi vei dua. This may translate to –– I don’t believe in depending on others. He has carried on with his shoeshine trade since. I said that it was great to hear; especially in the climate of freebies and dependency that has shackled many of our citizens. Even the able-bodied ones. A girl passed by and asked to buy a roll. From the shoeshine box emerged a BH20. The roll sold for $1.20. I didn’t ask whether he was selling some other wares. Now, that’s entrepreneurship! I submit that such a tale is worth sharing. Kiniviliame Keteca Nausori

I know Land Transport Authority officers are doing their best but I wonder whether there are some officers who find it more convenient to park in shaded areas and book drivers for very minor offences. Yesterday (January 22), I was on my way to the service station (about a half a kilometre away from my house) to fill $10 worth of fuel. I do not carry my wallet (which holds my driving licence) with me at all times, for personal safety reasons. I was stopped halfway to the service station by an LTA van with four officers who asked politely to see my driving licence. I told them politely that it was at home in my wallet and I could go get it for them. They preferred instead, to contact the LTA Lautoka office by mobile phone and checked whether my driving licence was valid. It was. So, even though it was valid, they decided to book me with a fine of $25 because I didn’t “produce on-demand”. So, my fuel run cost me $35 even though only $10 actually went into the tank! Every day in Lautoka, I see taxis overtaking dangerously, parking at junctions to pick up and drop off passengers and I see private cars being used as taxis. And, Lautoka’s Central Business District is congested daily because of double parking, illegal parking and straightforward recklessness. And where are the LTA officers? They’re parked in shaded areas on the outskirts of town and seem to be more interested in booking drivers who don’t have their licence on them! There needs to be some common sense. Yes, we all need jobs and income to feed our families … but parking in conveniently shaded areas to book drivers for very minor offences while turning a blind eye to the more serious traffic offences is to me, the height of laziness. And, if I don’t pay $25 within 90 days, I will face an international departure prohibition until such time that I pay! I say if LTA officers took their jobs more seriously and hunted down the real threats on Fiji roads, we’d have fewer road deaths and safer roads. But, of course, that’s too much work. Easier to just park in the shade and look for easy minor bookings! Dennis Rounds Jinnu Rd, Lautoka

I believe the mere fact that Weightlifting Fiji (WF) have yet to resolve the debacle between themselves and the Levuka Weightlifting Association (LWA) says a lot about the poor attitude of Weightlifting Fiji. The construction of a new Satelite Training Centre without involving LWA is a rather sinister and inappropriate thing to do by the ruling body? The fact of the matter is under LWA we were producing great weightlifters, so obviously they were onto something that was bringing about great success, not only for LWA but for Weightlifting Fiji. When something is working well and producing the desired results why spoil it? Weightlifting Fiji really needs to sort their differences out with LWA as it’s the only way for them to earn back some credibility and show of professionalism. It is for WF to iron out this mess. Instead of shunning Levuka Weightlifting Association, Weightlifting Fiji should be accepting and supporting them in every way possible. Get off that high horse and sort out this mess instead of dealing with it in such an unprofessional manner! Simon Hazelman Rava Estate, Savusavu

“Why?” “How?” The two most important words throughout childhood. Exploration is vital to education. Tessa MacKenzie Suva

A white 28ft open fibreglass boat, a 40hp outboard motor, a fuel tank and a 60hp outboard motor were stolen from Navutu in Lautoka. Reports by property owners to the police included the identity of a suspect from a neighbouring community. Now the wait begins for the long arm of the law to respond and the elders to ensure respect on the rule of law by youths in both communities. Dan Urai Lautoka

This pipeline thing is getting contagious. While having a basin of grog at Kava Place, someone said that the taki was taking too long. The guy looking after the basin simply said: “You just wait, the call for the taki is in the pipeline.” Karike! Allen Lockington Kava Place, Lautoka

Well, we can say that a secondary school has started with a 2020 boom. Mere Lagilagi Raviravi, Ba

With the outbreak of a deadly virus in China, and spreading very fast to other countries, are we Fijians prepared? I think we should be extremely cautious because our doors are wide open and we might have to repent if we are not careful. Hope the authorities will be pro-active rather than fire fighting. Vinod Kumar Suva

Every now and then, I meet my teacher friends. We have our catch up. They have tonnes of issues for discussion. I sum it in one word. Frustration. They congratulate me for leaving the profession. And we depart. Mohammed Imraz Janif Natabua, Lautoka

Noji! Are you prepped for that new flu? I think scribe making his own vaccination and tested in on Pintu while he was whu-ing around Kava Place, at least we prepping, eh guys. Nigel Fiu Owls Perch, Lautoka

Liverpool’s demolition of Manchester United at Anfield (2-0) took the giants 16 points clear at the top and only a miracle can now stop the Reds from winning this year’s EPL title. While Liverpool played like giants, Manchester United was a shadow of the team that flourished under Sir Alex. Sadly, the Red Devils have become a name. Fans have lost interest and top-four finish looks to be a dream under Ole Gunner! Rajnesh Ishwar Lingam Nadawa, Nasinu