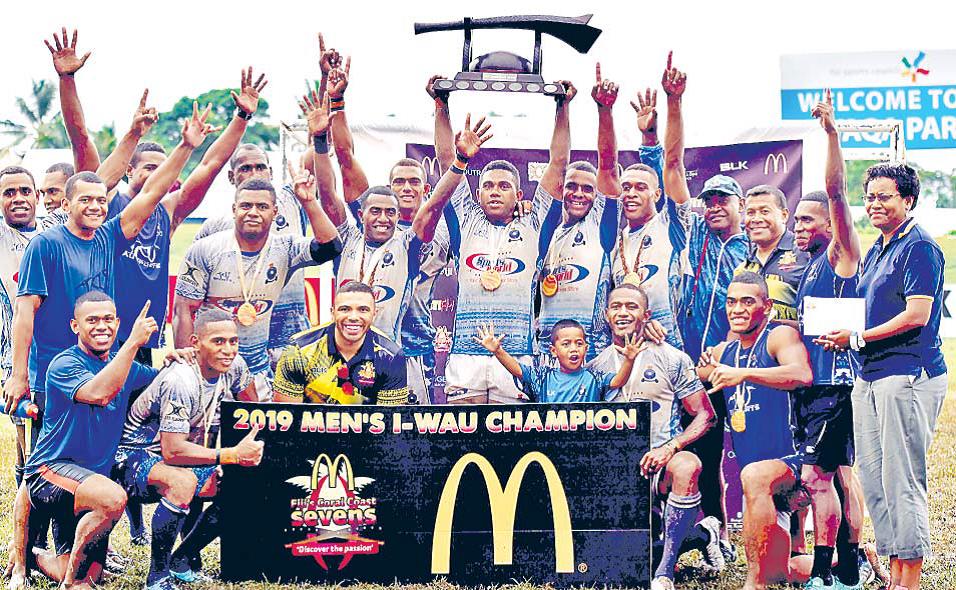 It did not come to me as a surprise that a fit and well-oiled Police outfit secured this year’s McDonald’s Fiji Coral Coast 7s and in the process completed a hat-trick just as the Tuva Youths did on Thursday. In my Friday letter I had predicted a Police vs Tabadamu final as the two sides are Fiji’s best 7s teams at the moment and while Police bulldozed past the Australian Development side Tabadamu outclassed Ratu Filise. Going into this year’s tournament with an experienced squad in the likes of former 7s reps Taliga, Ikanikoda and Keponi Paul and regulars Matai, Sauturaga, Baravilala, Kurisaru, Nawaqadau and Tanoa the Police side was outright favourites and the force did not let their ardent fans down. Despite the waterlogged Lawaqa Park, the Police side played their trump cards right and compressed the Tabadamu attack led by the likes of Laqai, Naikasau, Vota, Cakaunivalu and Abele and forced the Raka 7s champs to make mistakes and crumble under pressure. However, I was slightly disappointed with the discipline shown by the two sides towards the end of play which resulted in five yellow cards being flashed. As I look forward to the epic battle in Hamilton this weekend, I congratulate the Police side for the gutsy effort and I compliment Jay White and his team for a magnificent organisation. My heartfelt gratitude goes to Maloney, Habana, Serevi and the overseas youth, men’s and women’s teams for visiting our shores and for adding excitement and fun to this year’s McDonald’s Fiji Coral Coast 7s tournament! Rajnesh Ishwar Lingam Nadawa, Nasinu

Well done to Police for scooping the McDonald’s Fiji Coral Coast sevens, beating Tabadamu. They both played in the final of the Tabadamu sevens as well. However, the biggest round of applause must go to the organisers of the Coral Coast Sevens and their sponsors. This is the only tournament in Fiji’s history that has a free entry. Bringing overseas teams, choosing celebrity guests and organising a men’s and women’s sevens tournaments with no financial gain in mind shows true passion for the game. Thank you Mr Whyte and his team, you carry the flag of passion for sevens rugby. Vinaka Nadro joka kece Viti kei vuravura. Shalwyn Prasad Mukta Ben Place, Nabua, Suva

With the recent saga between the Ministry of Education, Human Rights Commission and the Catholic Church, I wish to salute the Seventh-day Adventist Church on their capacity to privatise one of their high schools. The idea of true education had been born on the development of children holistically. However, if all faith-based schools in Fiji are privatised or close their doors, will the Government be able to cater for the influx of students to other schools as many will opt for the free education since they cannot afford to pay for the fees in private schools? Bill Kunavatu Lautoka

The ongoing debate pertaining to the appointment of the school heads is indeed quite disturbing as it could have a significant impact on the education of our beloved children and the country as a whole. I believe the open merit recruitment system (OMRS) currently been utilised to select the school heads is quite alarming. Most stakeholders are for OMRS but the manner in which it is implemented does not capture the strengths of school heads through the three-hour test alone. The revelation by the teacher unions and the school managements that some with proven records, having years of experience and adequate qualifications have been displaced is indeed of a great concern. The position of school heads is critical to the overall development of the children and society as a whole, as they set the tone and culture of the school. The position is revered to those who have gradually gone up the ranks and file of the education system and have proven records. Schools cannot and neither can they be compared with other government departments nor the private sector. It has a unique setup and it needs to be dealt with great sensitivity, as job test alone is too narrow to test the abilities of the school heads. It does not stop MoE to take actions against those heads that are not able to meet their expectations. I believe it would be hypocritical and of a serious concern for the Ministry of Education to say, that our past heads were not performing as such they had to go through OMRS. Is it that our children all this while were guided by mediocrity appointed by MoE? I believe many heads have been demoted to lower ranks; surprisingly they would guide and assist the new head of school. It is time to consult all stakeholders in order to determine the best method contextualised to our unique school system. Hopefully this reform does not come back to haunt us for we were too ignorant to see the reality on the ground. I have every confidence that our Education Minister and the assistant minister have the resolve to set the system right. Raynav Chand Nakasi

First they force us to get e-ticketing cards, now they are saying there aren’t any two dollar disposable cards available and we have no other option but to purchase the five dollar cards or more. So where is the right of the customer here, or our basic human right to choose freely, because they are now boarding buses to see if you have your receipt. I had written about this before about doing away with the receipts as it is already contributing to the pollution on our beautiful land. Furthermore those bigwigs don’t travel by buses daily and don’t know how uncomfortable it is to be travelling on the public transport especially when it is full. Neither have they looked into my earlier concern about the traffic jams and how it contributes to stress and the physical well-being of the common man. Come on guys let’s really be democratic and give the people the choice to tap the card or pay in cash. We are not as developed as other nations and it will take a while, as is evident in the rubbish strewn all over the place, now that is another story. LAWRENCE WARA, Suva

Thanks for the coverage of the controversy regarding the positions of principals and head teachers in secondary and primary schools (FT 19/1). As a former student of Suva Methodist Boys (now Primary) School and Marist Brothers High School, I write to express my support for the position taken by the heads of the Catholic and Methodist churches. Having read the articles by Professor Wadan Narsey and Brother Fergus Garrett (FT 19/1), I am convinced that the former very fruitful partnership between private organisations and the State is under severe strain and likely to collapse with dire consequences for students, teachers, and parents. I believe those pushing for reforms in the top-down manner are people with limited knowledge of the evolution of Fiji’s educational system. Currently, I believe 99 per cent of primary schools, more than 80 per cent of secondary schools, and a third or more of the tertiary institutions are run by private civil society organisations. Some are faith-based and others are ethnic, cultural, and community-based. As Brother Fergus has stated, the owners of these schools should have a say in the running of the schools including their leadership, and elements of the curriculum. I believe the top-down approach by government to education reforms has alienated and antagonised teachers, school authorities, parents and communities. This is not likely to achieve the much needed consensus and social cohesion required to enhance the State and civil society partnership in improving the standard of education in the country. Professor Vijay Naidu Nailuva Rd, Raiwai, Suva

A senior officer of the Lautoka City Council is alleged to have embezzled more than $10,000 and the CEO thinks that they can do an internal investigation. I am sure that senior officer has a lot of friends who might help him and hinder the investigation. FICAC or police should investigate and clean up the mess at Lautoka City Council. A lot of ratepayers are actually up in arms and I hope the ratepayers association of Lautoka can do something about the affairs of LCC. The saga at LCC needs to be cleaned up, first the swimming pool, new market, asbestos, Tavakubu market, now embezzlement what next Mr CEO. Please get FICAC to investigate. No wonder the ratepayers are demanding council elections. John Brown Drasa Vitogo, Lautoka

The request made by the learned head of the Catholic Church in Fiji has its merits and demerits. It comes down to an individual’s perception. Schools are established to facilitate the process of learning through acquiring knowledge, skills and values. The knowledge, skills and values pertain to academic, extra-curricular and religion. I believe religious education is one of the basic reasons why parents send their children to schools of their own faith. We have all witnessed high dignitaries attending programs, local and overseas, where prayers of different denominations are conducted. We all receive invitations and attend religious ceremonies organised by our friends at their homes. The prayers and ceremonies are different from our faith. We respectfully bow our heads and offer our own prayers. The same is currently practised by school heads, teachers and students belonging to different faiths during school assembly and other functions. Respect is a fundamental component of religious tolerance. Religious tolerance accommodates unity and consistent existence of a peaceful society. Our approaches to religion may be different, our religious practices may be different but don’t we all agree, there is only one God? Irrespective of which faith a school head belongs to, there are enough expertise
present in schools to continue religious education relating to the school based faith. This is my opinion without any affiliations. The respected
Archbishop has his educated and calculated reasons. MOHAMMED IMRAZ JANIF, Natabua, Lautoka

Please don’t compare our players with English Premier League players. Either you are fooling our players or are completely fooling yourself. A SHARIFF SHAH Savusavu

The Coral Coast 7s tournament over the weekend may have produced another rising talent in Filipe Sauturaga of the Police club. Mohammed Imraz Janif Natabua, Lautoka

The world is getting too sensitive. Soon I won’t be able to make a joke about myself just in case people will get offended. Allen Lockington Kava Place, Waiyavi, Lautoka

I believe if there is one motto our rugby sevens team needs to adopt then certainly it will be “respect all and fear none”. These words are simple but very powerful. The season is set to kickstart in the new year. I am sure we will be the target of many teams who have stepped up their preparation. The departure of some experienced players has created space for new players to prove themselves. My belief is that the players in the team are still capable of bringing the trophy home. Baber has got the right mix of players. Hamilton is one place where Fiji will never run short of support. It’s more about mind games from now and the start of the tournament. So it is mottos such as this that Baber and the team can embed into the team which builds up their self-belief and is replicated come game time. Go Fiji, go! PRANIL RAM Votualevu, Nadi

Well said Prime Minister Morrison, “coming to Fiji in the spirit of family”. Sadly I believe the Government of Fiji has a different interpretation of “family” (vuvale). Dan Urai Lautoka

Can we, our PM, have one minister per portfolio just like the Waterways Ministry? You have overloaded some ministers with too many. They have only four years and are “pressed for time”. No wonder some ministers keep changing portfolios. A SHARIFF SHAH Savusavu